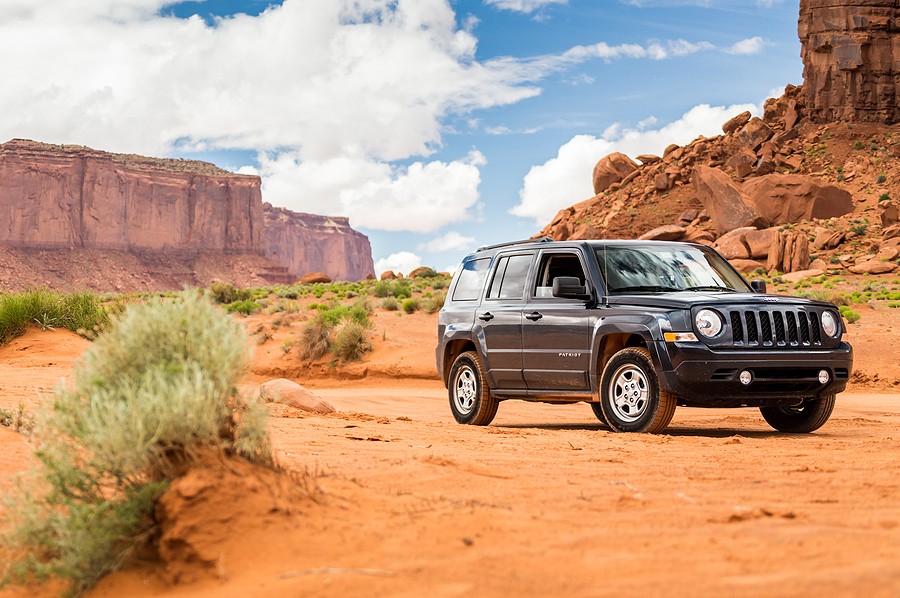 The Jeep Patriot is a front-engine five-door compact crossover SUV that is both produced and manufactured by Jeep, a brand of American automobile and a division of the FCA US LLC. The Jeep Patriot first debuted with the Jeep Compass in April 2006 for the next year, and shared a platform with the GS platform, differentiated only by their styling and marketing.

The Jeep Patriot uses either a 2.0-liter or 2.4-liter World gasoline l4 engine, an inline four engine or straight four engine that is a four cylinder internal combustion in which the cylinders are mounted in a straight line or along the crankcase. Both front wheel drive and four wheel drive are both available for the Jeep Patriot.

The system is a four wheel drive or all wheel drive system that is front wheel drive when it has traction on the road, but can also put up to around 50% power to the rear wheels. The electronically controlled clutch on the rear differential can be locked below a certain speed, and requests that the ECC be locked more in the regular all wheel drive mode.

The Jeep Patriot underwent a facelift in 2011, with minor interior and exterior upgrades for this model year. The front fog lamps were given a smaller size and placed in a different location, with the “Patriot” lettering on the rear bumper removed and replaced with a traditional look. The three trims were offered, either Sport, Latitude, or Limited.

For the 2011 model, the 70th anniversary Edition model was produced in order to commemorate big occasions in Jeep history. It was based on the Sport model with beige interior colors, unique alloy wheels, nine-speaker sound system with subwoofer, fold down liftgate speakers, Sirius XM radio, leather wrapped steering wheel, leather seats, and other features.

The inception year of the Jeep Patriot definitely had some problems, but was much less prevalent than the following couple of years after the 2007 model year. The main categories of concern for users focused on the body and paint section and the engine system. The top issues of the body and paint focus on the water leaking into the interior, the subframe cracking, and the subframe rotting out. The typical repair cost of the water leaking into the interior can be fixed by around $110 and occurs at around 54,000 miles, with users stating that the light has water leaking from it.

The top concerns regarding the engine include the engine stalling and shutting down while driving, the car hesitation upon acceleration, the car stalling when it rains or there is extensive moisture, the car losing power and acceleration, and the car running roughly. To fix the car stalling while using, the typical repair cost comes out to around $200 and occurs at an average of around 109,000 miles, with users stating that the car eventually slowed down to a stop while driving.

This year the Jeep Patriot had the highest number of user complaints, with the most user issues focusing on the windows and windshield, and the body and paint for both users and the NHTSA. The window concerns focus on the sunroof leaking and the power windows failing, with the typical repair cost coming out to around $150 for the sunroof leaking and occurring at around 42,000 miles.

The top concerns regarding the body and paint system involve the water leaking into the interior, the car having a rusted subframe, and the paint bubbling after use. To remedy the water leaking, the typical repair cost comes out to around $200 and occurs at around 65,000 miles.

The top category of concerns for this model year involves the body and paint, with users stating that the water leaks into the interior as it has the previous year, the engine cradle rusted through, the subframe and cradle rusts, and the paint peels off of the roof. To fix the water leaking, the typical repair cost comes to around $100 and occurs at just below 40,000 miles.

After a few years of the Jeep Patriot having relatively few problems compared to the 2008-2009 model years, the 2014 had a few more issues than Jeep would have liked. The top concerns focus on the body and paint category, with the second highest problem category focusing on the electrical system.

The body and paint category problems focus on the water leaking into the interior, the doors out of alignment, the car vibrates with the driver’s side window open, and the paint bubbling. The top electrical system issues focus on the engine not being able to turn over, the engine not starting, the throttle control and engine stability lights turning on, the timp failing, and the vehicle shutting down while driving.

The engine issues focus on bad motor mounts, the trouble starting in the engine, the car not accelerating while driving, and the car shutting down while driving. The issues with the motor mounts occur at just below 10,000 miles and have users stating that the brake calipers tighten up due to the excessive vibration.

The electrical system problems involve the car not being able to start, the interior switches not working, the dash lights flashing periodically, the lights dimming, and the low tire lights turning on.

The pros of this model year involve the lower base price and the capable off-road features with the Freedom Drive II package. The cons of this Jeep Patriot include the underpowered and noisy engines, the cheap cabin materials, the poor fuel economy, and the few driver assistance features.

The Car US News Scorecard gave the Jeep Patriot a low score, with the rating just being a 6.3 out of 10. The critics’ rating comes to 5.0, the performance coming to 5.4, the interior coming out to 5.8, the total cost of ownership coming out to 9.0, and the safety ranking earning 7.8, with the JD Power reliability score coming to 2.5 out of 5 stars.

The pros of the 2017 Jeep Patriot involve off-road capabilities, but the overall ranking in categories is deferred due to the lower quality materials, the flimsy handling, the lack of power engine performance, poor crash test scores, and below average reliability. The cons of this Jeep Patriot involve the underpowered engines, the lack of features, the cheap cabin materials, and the poor safety ratings.

The Car US News Scorecard for this model year only gave the Jeep Patriot a 6.3 out of 10, with the critics’ rating being 53., the performance 5.7, the interior coming out to 5.7, the total cost of ownership coming to 9.0, the safety coming to 7.8, and the JD Power Reliability coming to 2.5 out of 5 stars.

The Jeep Patriot is a fairly safe and reliable car, but earned lower rankings in many categories and earned a low ranking in the Car US News scorecard. It is also important to determine the overall IIHS safety ratings to determine if this is a confidence-inspiring car to drive.

The Jeep Patriotearned a “Good” ranking for multiple categories, like the moderate overlap front category, the side crash rating, the roof strength rating, and the head restraints and seats ranking. The car earned an “AVerage” ranking for the ease of use latch on the child seat anchors, and also earned the “Poor” ranking in the headlights crash avoidance category and the small overlap front driver’s side crashworthiness test.