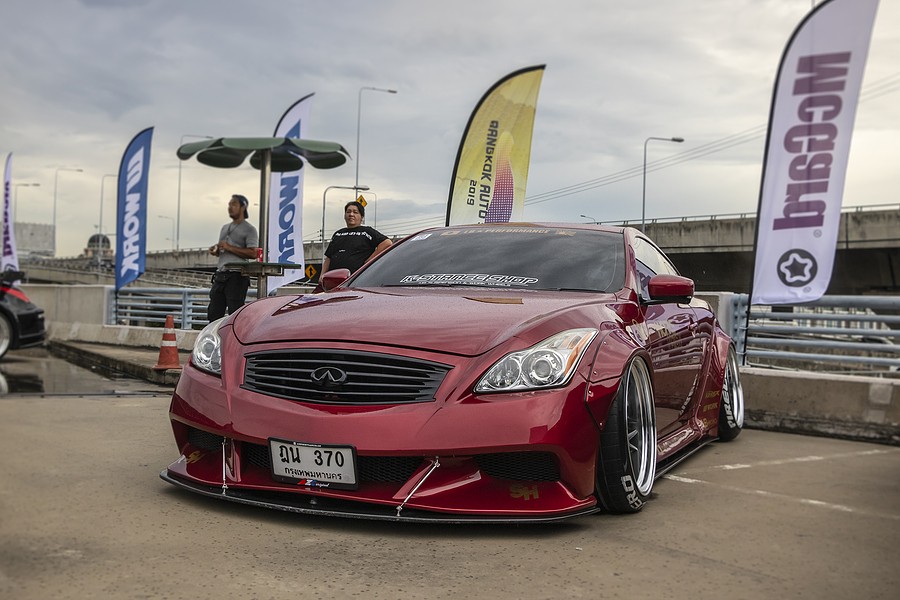 The Infiniti G series is a line of compact executive cars that is produced by the Infiniti line of Nissan, a car company that is centered in Japan and headquartered in Yokohama. Produced from the years 1991-1996 and 1999-the present, the first two generations of the Infiniti were sedans, with the third generation being rebadged lines of sedans and coupes.

The 2008 is the first model of the Infiniti G37, and has the fourth highest amount of problems when compared to the other model years from 2009-2013. It is the year before the worst model year on record, the 2009 Infiniti G37 that had the most problems.

The main category of user complaints regarding the 2008 Infiniti G37 problems involves the interior accessories, engine, and the body and paint. However, the positive regarding this model is that there are no NHTSA complaints for this model year.

The main complaints for the interior accessories is the dashboard melting and the steering wheel peeling over time, with the problems generally happening at around 50,000 miles and have users stating that the dashboard turns a different color, the dash can get cracks, the dashboard can bubble and peel, and the dashboard heats up and gets damaged very quickly.

The 2009 model for the Infiniti G37 had the most overall complaints, with the most reported problem involving the cracked dashboard. The main category of complaints dealt with the interior accessories, followed by the electrical issues and the steering system. The concerns regarding the interior accessories were similar to the previous year, with the majority of user concerns revolving around the cracked dashboard and the steering wheel paint coming off.

In order to repair the cracked dashboard, you can fix the problem yourself, so that you can save money and avoid a steep repair price. You need to trim and shave away the lifting edges, and then fill the crack with epoxy and smooth with a card. After that, you have to allow the mixture to cure for an hour, and then snd evenly with 220 grit. After this, repeat the process until you reach the necessary surface level.

In addition to the interior accessories and dashboard durability issues, the next category of user concern revolves around the electrical system. Users noted there ended up being a complete loss of electrical power, with the typical repair cost coming in at $300 and occurring at around 66,000 miles, with users stating that he most common solution was either to replace the battery, check the ground or relay wires, and to determine where the electrical failure was coming from.

The last category that users had issues with in the 2009 Infiniti G37 was the steering system, with the majority of user complaints focusing on the steering lock failing. The typical repair cost for this averaged to be around $1,250 and occurs at around 85,000 miles, with the most common solution being to replace the steering lock.

After the 2009 model with the most reported user complaints, the 2010 Infiniti G37 had many fewer complaints – but also had the highest amount of repair cost and severity. The main category for concern delta with the engine, with the main user complaints revolving around the check engine light and engine running rough. One of the main solutions would be to replace the engine.

The only additional complaint regarding the 2010 Infiniti deals with the seat not working properly, with the typical solution being to replace the seat and coming in at an average repair cost of around $2,000.

The main category of complaints regarding the 2011 Infiniti G37 dealt with the interior accessories, similar to the 2008 and 2009 models. The number one issue with the interior accessories deals with a cracked dashboard, with the most common solution being to replace the entire dashboard and occurring at around 53,000 miles. Most users state that the dashboard can crack very easily, the side panels of the vehicle crack, and the top of the dashboard is very sticky and can get dirty easily.

The top categories that users had complaints about regarding the 2012 Infiniti G37 dealt with the brakes, exterior accessories, and the interior accessories. The brake concerns focused on a shudder and vibration in the brake pedal, and the steering wheel shaking while you were putting pressure on the brake pedal. The most common reason that you would feel vibrations in the brake pedal while you are pressing down is due to a brake rotor being unevenly worn or damaged. These brake toros are in charge of the brake pads that are pressed against the calipers to slow the wheel, and can become warmed and damaged over time.

The top categories that users had complaints about in the next year model involve the interior accessories, the AC and heater, and the body and paint category. The interior accessories qualms were different from the dashboard melting over time, and instead focused on the Bluetooth phone not working properly and the drink holders being too small.

The AC and heater issues in the 2013 Infiniti G37 involved the AC blowing warm air, which has a typical repair cost of nearly $3,000 and involves the most common solution of replacing the compressor and radiator in the car. Hot air coming from your car can be due to many reasons, one of which is low levels of refrigerant in the car, a problem with the car condenser, a broken or damaged compressor, a faulty cooling fan, or the electrical system of your car.

Now that you know the problems that are most relevant in each model year, there are certain top problems that seem to occur more often than others and cause more expensive repairs or replacements.

The first problem deals with the vehicles with an automatic transmission experiencing a harsh downshift from 4th to 3rd gear. This includes vehicles with a 7 speed automatic transmission experiencing a rough downshift during deceleration, with the control module software needing to be updated to correct this concern. In some vehicles that are older or have a higher mileage, the transmission shifting might occur more frequently. The main model years that are affected with this model are 2009, 2010, 2011, and 2012, occurring at around an average mileage of 65,000 miles.

The second top Infiniti G37 problem is the tapping sound coming from the driver’s side of the engine, with the noise possibly being associated with the variable valve and the lift actuator, with a powertrain control module software update being a possible solution to this Infiniti G37 problem. The repair price estimate comes in at around $88 adn $111, with 6 model years being affected and occurring at just below 50,000 miles.

The third most common problem with the Infiniti G37 involves the brake warning light staying illuminated, even when the parking brake has been released. The foot operated parking brake can turn on the brake warning light for the entire time, even though the rbake has been fully released, with the brake assembly needing to be fixed to correct this concern. The average mileage of the problem onset occurs at around 55,000 miles bad effects 5 model years, ranging from 2008-2012.

In addition, a further problem that is prevalent in many Infiniti G37 models includes the engine RPM increasing beyond 500 RPM during braking at high speeds. Vehicles that have an automatic transmission may have an enhanced RPM while braking, with the powertrain control module software update being available to correct this concern. The main G37 vehicles with this issue include the 2008, 2009, and 2013, and occur at around 52,000 miles.

An additional problem that is prevalent in many Infiniti G37 models is the check engine light illuminating due to a canister purge valve fault. The check engine light might turn on due to an EVAP system charcoal canister purge valve control fault, which can be fixed by the valve requiring replacement and being installed properly. The main model years that are affected are the 2009, 2010, and 2011 models, and occur at around 85,000 miles.

One of the other common infiniti G37 problems is the GPS screen locking up during use, with the GPS being faulty and being corrected by turning off the ignition for several minutes and the GPS software update fixing this concern. This concern affects the 2008 model year mainly.

There is currently only one recall for the Infiniti G37, citing reliability and safety in all models. The NHTSA cited safety recalls in 2011 regarding the visibility, with the power windows devices and controls breaking down over time. Nissan is recalling certain model 2012 Infiniti G37 coupe vehicles and certain 2011 vehicles that were manufactured after July and through August. Since there is a programming error, the power window switch controller in the subject vehicles was manufactured incorrectly.

The threshold for auto reverse actuation is higher than the Nissan specification, where if a body part is trapped by a closing window, a pinch injury can easily result and cause damage to other users. Nisasn is in charge of notifying owners who have Infiniti G37 problems and dealers will have to replace the power window switches with new ones without charging the owners.

The Infiniti G37 reliability rating on repair pal earns a 4 out of 5 stars, which ranks it 8th out of 31 in terms of luxury midsize cars. The average repair cost for this vehicle comes in at just $540, which means it is lower than other similar cars and issues. While repairs are common with this car, the repair severity is less severe and expensive when compared to other similar luxury midsize cars. The average repair price is over $700 for midsize cars and $652 for all vehicle models.

The frequency of unscheduled repairs is an average of .5 times per 1 when compared to an average of .6 times for luxury midsize cars and .4 times for all vehicle models, so it is a little higher than average, but not often in the grand scheme of things.

Lastly, the severity of the problems and the chances of a repair or replacement being a major issue for the Infiniti G37 is just 8%, compared to an average of 12% for the midsize cars and 12% for all vehicle models.

PrevPreviousHow Do I Know If My Transmission Control Module Is Bad?
Next2004 FORD EXPLORER PROBLEMS – SHOULD YOU STAY AWAY?Next