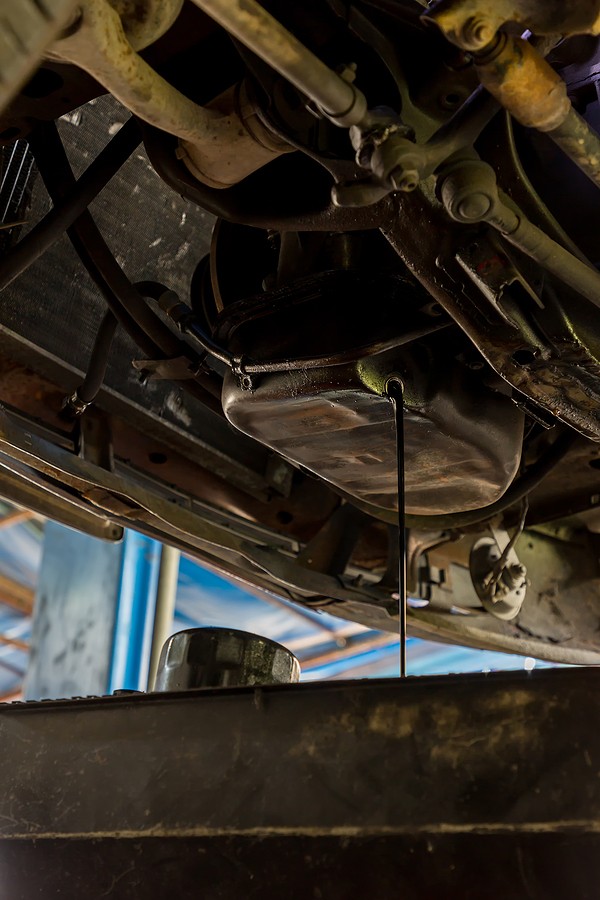 What is the purpose of an oil drain plug?

The oil drain plug on your car can be found on the bottom or side of the oil pan. Because of the continual effects of pressure exerted inside the vehicle's crankcase and gravity itself, the plug keeps the motor's lubrication from spilling out.

Where to Look for an Oil Drain Plug

The oil drain plug on a car is typically easy to find. This is due to the fact that it's normally found in the bottom of the oil pan, which is attached to the bottom of the vehicle's engine. (As a side note, you should check your car's oil levels on a frequent basis!) Because the plug isn't always on the bottom side, you'll want to check the side – that's where it'll be most of the time. It is more protected in this location from damage caused by rubbing against a pothole or even driving over a speed bump.

However, finding the drain stopper and getting to it are not the same thing. Plugs can be positioned against engine or chassis components, making them difficult to access without the proper tools.

I Have A Stripped Oil Drain Plug: What It Means

When you find yourself saying, “I have a stripped oil drain plug,” there are one of two conditions usually described by the term “stripped” oil drain plug. These problems differ from one another in terms of context and viable solutions. Damage to the threads of an oil pan's drain hole is the first of these problems. A drain plug (or oil pan bolt) cannot be levered properly because of this damage.

This issue frequently leads to continuous oil leaking and should be addressed as soon as possible. Oil is required for the proper operation of your engine. A slowly leaking drain plug allows impurities into the engine, which might cause internal damage, but the major issue is what occurs if an oil pan is allowed to drain to dangerously low levels or completely empty. The engine will swiftly fail if there isn't enough oil, as friction causes heat to build up and moving components to seize and break.

The second issue, frequently referred to as a “stripped drain plug,” relates to the hexagonal head of a drain plug being rounded off. This prevents the appropriate application of a wrench or socket to a drain stopper during removal. As a result, the old oil cannot be drained from an engine's crankcase. Before an oil change can be completed, this problem must be resolved.

How does an oil pan plug get stripped?

On today's vehicles, a stripped oil pan drain plug is a relatively prevalent problem. Steel oil pans were common in cars and trucks constructed in the 1980s and 1990s, and they were made of thick, sturdy steel that was rarely scraped away. As mentioned, aluminum oil pans are now commonly used in today's autos. Because aluminum is a greater heat conductor than steel, it can help keep your engine oil cold while it waits in the sump, ready to make another journey around the engine. Aluminum is also lighter than steel, so it can aid with handling and fuel efficiency by shaving a few pounds off an engine's weight.

The disadvantage of aluminum is that it is easier to destroy threads since a comparable sized bolt in aluminum will hold considerably less torque. Valve covers or intake manifolds bolting to aluminum heads, or oil pan drain plugs threading into aluminum oil pans, are the most common areas in a motor where this happens.

“I have a stripped oil drain plug,” happens by overtightening, a common way to harm a plug. Another one is cross threading and both will wreak havoc on the thread structure and spacing on the pan, bolt, or both. When a plug isn't put straight to begin with and is subsequently forced the rest of the way, it's called cross threading. Overtightening occurs when a power tool or excessive force is used to screw the plug in.

Though it is impossible to prevent experiencing drain plug damage caused by a vehicle's former owner, there are some steps you may take to avoid creating such damage yourself. The possibility of stripping a drain stopper is virtually reduced if these critical procedural considerations are followed.

So how do you avoid these things from happening? First, you must clean the plug and threads and inspect for any signs of damage before installing. Replace the bolt if any are found, as well as the gasket or washer that prevents the bolt from threading too far in. Then, by hand, tighten it as much as you can — this should be the majority of the way. If you face early resistance, there's a considerable possibility you'll strip the threads if you force it. Finally, use the necessary tools to torque to spec.

The first of these precautions is to replace your oil with a suitably sized wrench or socket. The hexagonal head of a drain stopper is substantially less likely to be rounded off if this is done. Drain plug size information for a certain vehicle can usually be acquired on the Internet or by checking a manufacturer-specific service manual.

When tightening the drain plug on a car, it's also important to follow the torque specifications. This drastically decreases the risk of damaging your engine's drain plug or oil pan threads. A torque wrench can be used to avoid overtorquing while also ensuring that the drain plug is not left loose in any way.

What do I do if my oil drain plug is stripped?

As previously stated when you find yourself saying, “I have a stripped oil drain plug” that is frequently used to denote two separate problems. The procedures for resolving these two problems are also distinct. However, with time and a steady hand, either outcome may be controlled.

The severity of the damage will determine your repair alternatives. You might be able to get away with tapping the hole in the pan and chasing the threads if there are only a few damaged threads.

How do you fix a stripped oil pan thread?

Turning a drain stopper counterclockwise with a wrench or socket is a common way to remove one with stripped threads. However, applying a modest amount of outward push to the plug itself may be required to engage any residual threads.

If the head of the stripped drain plug is flush against the body of your engine's oil pan, spin the plug counterclockwise while pulling outward using channel-lock pliers. Even in less-than-ideal circumstances, this procedure will usually suffice to remove the item.

What to do with a Drain Plug With a Rounded Off Head?

The removal of a drain plug with a rounded head requires the use of a special socket called a bolt extractor, which has spiraling interior grooves. One of the better sets is made by Irwin Tools, and it is reasonably priced.

With the use of a dead blow hammer, a socket of this sort can be lightly stamped onto the head of such a drain plug. The internal groves of the socket will bite into the head of a rounded-off bolt, facilitating the extraction procedure.

What to do with a Stripped Oil Pan Drain Hole?

An oil pan's drain hole might become stripped in some cases, making it impossible to torque your engine's drain plug properly. This might be concerning, causing many motorists to be concerned about what appears to be an unsolvable problem. Fortunately, using a high-quality oil drain plug repair kit, can typically solve such problems.

Oil drain plug repair kits remove any leftover damaged threads in an oil pan's drain hole before rethreading it to take a slightly larger plug. This process, when done correctly, allows a new drain plug to be installed in the same way as the vehicle's original plug. This eliminates the need to purchase and install a new oil pan, saving both time and money.

If you should ask how to use an oil drain plug repair kit, here are a few steps and guidelines:

Discard any threads that have been damaged.

A reaming bit is included in many oil drain plug repair kits, which eliminates any pre-existing threads. This creates a new surface on which a new drain plug may be tapped in place.

After that, a specifically sized tap will be threaded into the oil pan's drain hole with care. This creates new threads, which an enlarged drain plug will latch onto. A tap of this sort is usually rotated multiple times in a clockwise direction before being rotated 1-2 times in the opposite direction. This procedure will be continued until the tap has flowed through the oil pan's drain hole to its full depth.

Look into the threads.

After you've tapped a new set of threads into your oil pan's drain hole, take a moment to evaluate your handy job. Ensure that all threads are cut uniformly and that there are no metal shavings on them.

Prior to installing a new drain plug, it is usually a good idea to flush a 12 quart of oil through your vehicle's engine after re-taping your oil pan's drain hole. The great majority of metal shavings that would normally circulate into your engine's oil will be eliminated.

You'll now thread a new drain plug into the newly rethreaded drain hole in your oil pan. When tightening this plug for the first time, take care to inspect it for any anomalies.

Check For Leaks And Refill Oil

Check for leaks after filling your engine's crankcase to capacity with fresh oil to ensure the integrity of your repair. If no leaks appear, start your engine and check for leaks once more. After driving your car for a short distance, you should repeat this inspection. If your oil pan and drain plug are still dry after a brief test drive, there's no reason to expect any further problems.

We all know that a car's engine needs oil to work properly, and a slowly leaking drain stop allows impurities to enter the engine and cause internal damage. However, if the vehicle's oil pan quickly drops to dangerously low levels or is completely empty, because of a stripped oil drain plug, there are much more serious issues  you can expect.