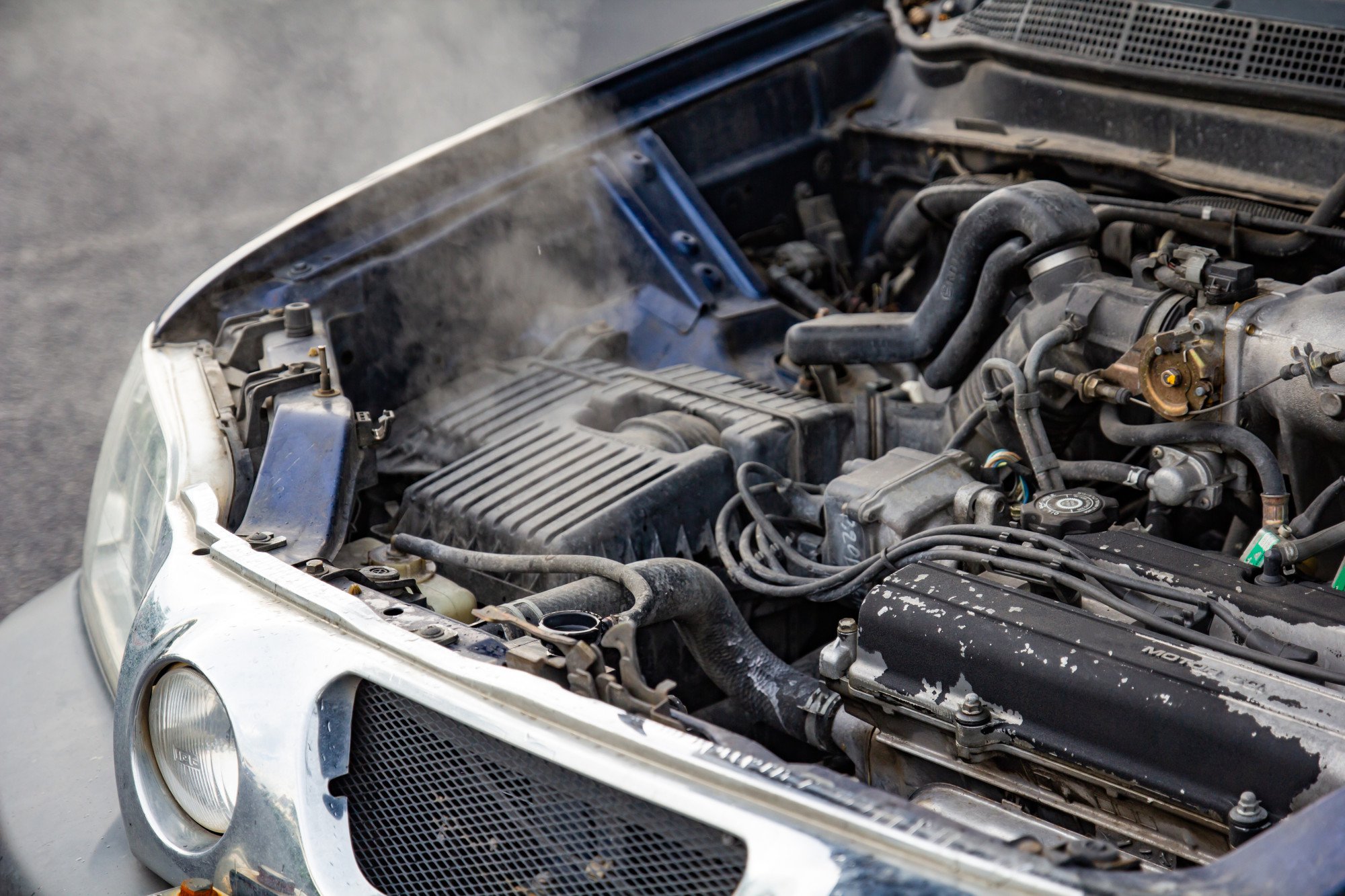 How To Sell A Car With Blown Engine: Why Not Repair It?

A blown engine is one that has been significantly damaged to the point where it must be replaced or totally rebuilt. The damage is substantial, affecting the bulk of the engine components. A broken block, shattered pistons, and damaged intake and exhaust valves are all possible consequences. The cylinders may be damaged and connecting rods may be damaged.

Also it may be primarily caused by a cooling system failure or lubrication inadequacies in the vehicle. Although it is a fairly typical automotive problem, engine repair is not always doable. It's a pricey and complicated car part, and depending on the extent of the damage, it might not be possible to fix.

Trying to get a car fixed with a blown engine means your vehicle can get stranded in the garage for weeks or it may even stretch to months. Engine problems in your automobile don't always imply you have a blown engine, but if you don't handle them immediately away, they can get worse. If you ignore warning indications of engine trouble in your vehicle, you could end up with a blown engine.

A blown engine can be caused by driving without oil, pushing the engine too hard, or even design flaws. Some cars, for example, may have poorly constructed engines that gradually leak oil, necessitating replacements more frequently than a regular car. Drivers who do not change their oil frequently enough risk having their engine blow up unexpectedly.

But before taking any further steps you have to first make sure that you really have a blown engine. Here is how to check:

When someone says his engine has blown, he usually means the engine is dead or won't start. A car owner who is more mechanically inclined will limit it down to the rings being shot or the engine blowing a gasket. Even experts aren't always in agreement on what constitutes a blown engine. The only thing that all of the diagnoses have in common is that the old motor needs to be rebuilt or replaced.

Before you give the go-ahead for repairs, add up the expense of fixing your blown engine. Be ruthlessly honest with yourself about the engine's and the vehicle's general condition. One issue typically leads to another when repairing or upgrading important engine components. Before you begin, double-check the whole repair bill.

There are a number of indicators that your engine is deteriorating. A reduction of power and a drop in speed are two common engine symptoms. It's also possible that it'll get louder. These sounds are similar to rattling clicks or knocking metal. If this happens on the road, lift the clutch foot as far as traffic will allow so that the oil can lubricate the cylinder. This aids in the reduction of temperature and the immobilization of the vehicle.

It is always a good idea to replace the cylinder head gasket when fixing a broken engine. This is due to the fact that when the engine is opened, it tends to distort and lose its initial compression. There's a chance the engine will crash again if nothing is done. After the repair, it's also critical to properly reassemble all of the engine's seized parts. This eliminates any gaps that could create friction and uneven wear.

How do you sell a car that needs an engine?

The best way how to sell a car with a blown engine depends on what your priority is.

Do you want to sell it as quickly as possible? Then the best way how to sell a car with the blown engine is by selling it to a junkyard.

The ideal place to sell your automobile in need of repairs is determined by how quickly you want to complete the transaction, how much you want to get for your car, and what your immediate objectives are.

A junkyard or scrap yard may be the greatest option if you want to sell your broken car immediately and get rid of it. Often, these yards will pay you a set price or only reimburse you for the scrap metal value of your vehicle. However, because they are unconcerned about the car's condition, this may be a quick sell.

Reaching out to potential buyers in your area and weighing your choices is the best approach to sell a car with a seized engine. You might expect a dealer to pay the most money for your car with engine difficulties, but you might be disappointed by their suggested trade-in offer.

Contact local junkyards and internet junk car buyers instead. These purchasers can assist you in determining the value of your vehicle, and they usually include free towing. And while you’re at it check it CashCarsBuyer. We promise to give you the greatest deal on your used car. No one can match our deal! ​

Do you want a new car you can use fast? Then the best way how to sell a car with the blown engines is by trading it in.

If you need a new vehicle quickly, trading it into a dealership can be the best option. Going to a yard or online firm that specializes in automobiles with problems is an easier approach to sell your vehicle with mechanical issues. Other dealerships will take your car, appraise it, and apply the trade-in value toward the purchase of a new vehicle but may be able to offer you a lesser price for your automobile because they do not specialize in damaged vehicles.

Do you want to get the best price? Then sell it privately.

You can also sell your car for parts

Your old car's engine may be worthless at this stage. But it doesn't mean the rest of your automobile isn't stuffed with parts that other people could be interested in! If you're good at working on cars, you can remove a lot of these pieces from your vehicle and sell them. You can sell auto parts such as:

Your old car isn't worth much in its entirety. When you portion it out, though, you can make a lot more money than you think.

How much can you sell a car with a bad engine?

Finding a buyer for your car with a blown engine can take a long time and effort. In most circumstances, potential purchasers will underbid you since they are aware of the hefty expense of repairs. Some vehicle dealers may be hesitant to take your car since they will have to invest money to get it functioning again or sell it in parts to make a profit.

The cost of attempting to rebuild your car's engine can sometimes outweigh the car's value. Trying to deal with it, as a result, might be extremely difficult. So you need to have an idea how much you can get for a car with a blown engine. You can expect to get at least $3,000 less for your car if it doesn't have a working engine than you would for a working vehicle. So, if your car is worth $10,000 and is in good condition, you should expect to earn $4,000 to $7,000 for it.

Can you sue someone for selling you a bad car?

In the United States, almost anyone can sue anyone else for almost anything. But you'll have to prove that they were aware of the flaws with the car before selling it to you, otherwise you'll lose the lawsuit in a couple of minutes.

But, in most cases, you only have recourse if the car is not as described. For example, if the owner deliberately provided you with inaccurate information about the vehicle. It's difficult to demonstrate that.

Unless the deception was in the ad (for example, if the ad showed an odometer reading that was significantly off or listed equipment such as air conditioning that was not present), it's your word against his. Even if you don't win the case, you might be able to persuade the vendor to repay you and return the automobile by threatening to sue.

How to Sell A Car With Blown Engine: Prevent Your Engine From Getting Blown

When an engine runs out of oil, it will blow. Engine failure can also be caused by running an engine at high speeds and at excessive revolutions per minute (RPMs) for an extended period of time. Overheating is a common cause of a blown engine. An engine that has a major coolant leak risks exploding.

So the only way to prevent your engine from getting blown is to maintain your vehicle properly.  Never drive outside of the car's recommended ranges. Avoid driving at high RPMs and at high speeds for long periods of time. If utilized incorrectly, aftermarket turbocharging kits might result in a blown engine.

So, are you still considering replacing or repairing your engine? Then you should first do the math. In the vast majority of circumstances, replacing an engine is simply not worth the effort. That's because a new engine can cost several thousand dollars, and if your vehicle is older or has other issues, it's unlikely that you'll be able to afford to spend that much money on it. So better find the best option for you on how to sell a car with a blown engine. You may still be able to make the most out of it.