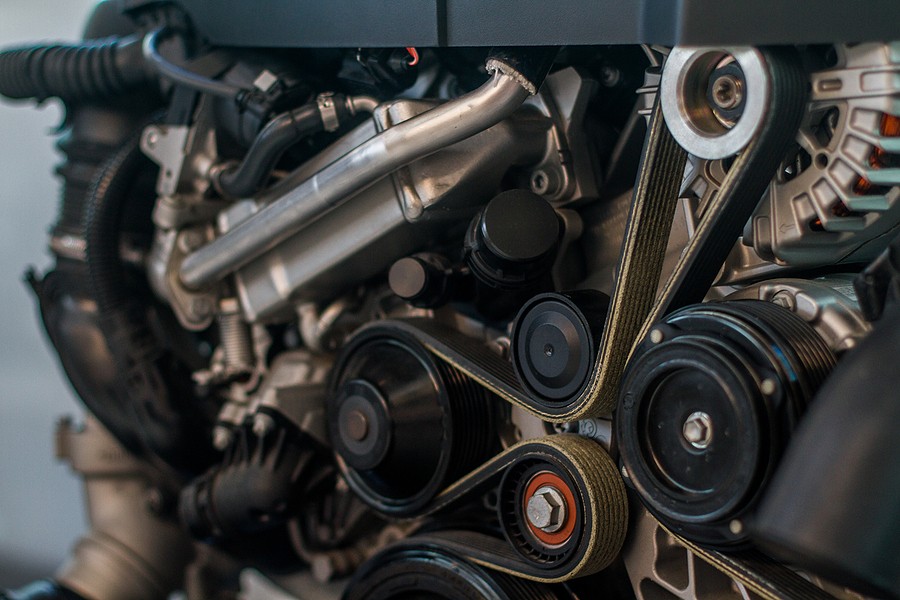 A vehicle’s serpentine belt is likely to decline in quality as the miles add up. It starts with the squeaking. The loud noise is the sign that the serpentine belt should be replaced. If not, the car can start to die (power steering, AC, water pump, etc.). It’s a repair with an average cost of up to $250.

The serpentine belt powers up various vehicle accessories such as the water pump, the alternator, and the air conditioning unit. When the belt fails, though, it could seem like the car is on its last leg.

It starts making a horrid squeaking sound at startup and on U-turns. Some drivers report hearing the noise when they accelerate.

When drivers see the laundry list of problems that happen because of one bad belt, a repair that doesn’t usually cost more than $300, they might feel lucky (if the problem is caught early).

If car owners want to keep that serpentine belt from squeaking, they should first learn the ins and outs of what indications present themselves when the belt goes bad, what options exist for the repair, and how much a driver should expect to pay to resolve the issue.

If you want to make a serpentine belt stop squeaking, you might as well as identify the issues. There are plenty of signs that indicate the serpentine belt is going bad.

What Does it Mean if the Serpentine Belt is Squeaking?

The squeal is a classic sound in old cars. Starting up the engine in the morning for that drive to work, and eeek – what is THAT noise? It’s likely the serpentine belt.

The belt holds an important task under the hood. It moves the engine’s various accessories. For example, it powers the alternator.

In old cars, it could be both!

The bottom line is that the noise means it’s time to get the serpentine belt checked out and quite possibly repaired. Getting the car to the mechanic is the only surefire way of getting the belt to stop squealing.

People who are sick of hearing the serpentine belt squeal might wonder how much they have to pay to make it stop.

Mechanics will only spend between $30 to $80 for the part. The price of the part depends on the make and model of the car, on the year, and on the availability of the piece.

The additional labor cost to have it installed runs between $100 to $200. The mechanic usually spends an hour or so working on the job. This means the repair is fairly quick and easy. In terms of car repairs, it isn’t too expensive.

This might be good news for the person who solves the serpentine belt problems early on. If the belt is just squealing, but the power steering, alternator, water pump, and air conditioning module are still in working order, that’s okay. It won’t be too major of a repair in most cases.

However, letting the car run with the problem until these modules or accessories are impacted could drive up the costs pretty quickly.

For example, if the battery dies, you’ll have to replace that. If the car over heats, many parts of the engine can get messed up.

When you think about the ominous mechanic’s warning about a serpentine belt going bad, don’t write it off. Get the repair done while it’s cheap, fast, and easy. If you wait for the problem to come to a head, it could blow up in your face.

If the power steering or alternator stop working while you’re driving along, not only are you due for a major headache involving a tow truck, you could be putting you, your passengers, and the general public at risk. It isn’t worth it!

It is not safe to drive with a bad serpentine belt. It is not recommended. Drivers with this problem should take the bus, call a mechanic, or send the car to a junkyard.

Can You Spray WD40 on a Serpentine Belt?

No. If you want to make a serpentine belt stop squeaking, you may want to think again before busting that old can of WD40.

There are a lot of people who run to get lubricant the second they hear a squeak. That’s not the right course of action when it comes to a serpentine belt, however.

The WD40 removes friction from the belt, which it actually needs to do its job. Additionally, the chemical breaks down rubber. You’ll need a new belt in no time flat if you put a corrosive substance on it.

People get this confused because the lubricant is designed for metal, but not rubber. WD means water displacement, and that’s what the chemical aims to do – for this reason, it helps avoid moisture in metals.

Not to mention, the problem isn’t always the belt. Yes, there could be worn spots are cracks on the belt. There could also be a belt pulley that’s no good. When the belt slides around the groove, it doesn’t connect. This slippage causes problems. Sometimes the belt is okay, but it’s too tight or too loose.

Another note: Some people say that the serpentine belt is only noisy on really cold days. This could be true. The belt is made out of rubber, so it could be pretty icy after a long night out on the street. Tell your mechanic if the noise goes away or gets worse in various weather conditions.

Is Changing the Serpentine Belt a good DIY Project?

Although $250 to $300 isn’t too bad for stopping the serpentine belt from squealing, there are always people out there who want to cut out the middleman and do the work themselves.

If you’ve got the tools and the knowhow, and you’re identifying with the DIY types on this one, you could be in luck.

Mechanics claim that this repair is now easier than it once was thanks to automatic belt tensioners.

Back in the day, there were even more belts in cars. Believe it or not, drivers often changed out these belts themselves in garages, back alleys, and parking lots. Now, however, the serpentine belt, also called a “serp belt,” has changed how the game operates.

Old cars may still require a tensioner, so use your best judgement on that one.

The general process is as follows:

The belt has grooves on it to keep it on track. If the gauge falls into the grooves when pressed against the belt, the belt needs to be replaced.

There are even applications for smart phones that allow mechanics and DIY enthusiasts to mark the belt and snap a quick photo to see if the belt is bad.

Cracks can be another sign that replacement is due.

Fun fact: In 2000, the automobile industry changed gears with the belts. They were once made of nitrile, but now they are composed of a material called ethylene propylene diene monomer or EPDM. This was a change in the right direction as the newer product lasts longer.

This also means if you’re driving a retro ride from before Y2K, you should be prepared to replace that belt at a moment’s notice (unless you’ve recently done so). This is just one of the many perks of owning a vintage vehicle.

If the instructions listed here already have you sweating, don’t worry. A mechanic will handle the job just fine, and the average cost of the repair is $150-$300. In fact, we recommend that all car repairs be handled by a trained and licensed professional.

Are Premium Serpentine Belts Worth It?

When we’re finally driven to resolve our squeaky serpentine belt problems, we may be tempted to take shortcuts, especially where cost is a concern.

Yes, economy belts offer cheap prices. However, premium belts are believed to go twice as long between swaps according to one local mechanic.

Serpentine Belt Replacement or Junkyard: You Be the Judge

On its own, the serpentine belt doesn’t sound like a major repair. In fact, plenty of old school car lovers do the repair themselves for nothing more than the cost of the part ($30-$80) and an afternoon in the garage.

Others, however, will be sick of car repairs by time the mechanic mentions this one. If you’re driving a beater, an old car, or a rust bucket, and the serpentine belt snaps, you might consider junking the car once and for all.

The average car’s lifespan is about twelve years. There are plenty of cars that make it longer, reaching 100,000 miles, even 200,000 miles. That being said, there are plenty of other makes and models that don’t reach 70,000 to recalls and repairs. Those cars are headed straight to the junkyard.

If the serpentine belt’s squeaking is the last straw, you might consider starting over with a new ride. Send the old squeaky car to the junkyard and receive a cash payment for the transaction.