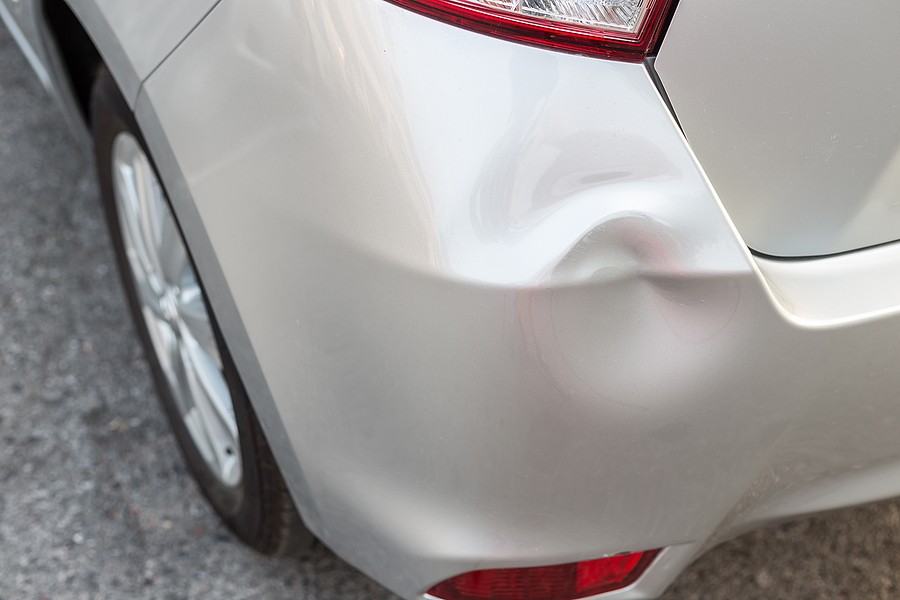 Accidents and reckless parking typically cause car dents. Sometimes, they might be that way because it is just an old car and some parts start to give in.

Have you ever looked at your car and noticed a dent in it? It might not be too bad, but still enough to annoy you. You probably don't want to spend $50-$150 to get the dent removed by a professional because of how expensive they are.

But if you have some time and patience, this article will show you how to fix the small dent in your car without spending too much.

What is a dent?

A dent is a type of damage that occurs to the outer surface of an object. This can be caused by impact or pressure.

Dents are commonly found on cars, structures, and other objects like glass tables, etc. When someone dents something, it usually creates a bump or depression in its surface area. It can also leave a crack or tear in the object's outer coating.

How to fix a small dent in your car without spending too much?

As earlier seen, dents can happen on almost anything because it is an effect of controlled or uncontrolled damages. It also leaves the surface area with a depression. Once you touch it, this will be difficult to notice, but a small dent can be a big problem if you don't know how to fix it.

So what do you do when you have a small dent? You don't want to take it to a professional and pay them an arm and a leg for the service. What if you can fix it yourself without spending too much? That would be great, right?

Besides, you don't have the time and money to take your car to a professional for repairs. So it is much faster when you do it yourself because you don't have to wait for them to fix it. It is also cheaper because you only spend the money on some materials for this task, not on any labor charges. Steps for fixing the dent your car yourself

If you decided to get rid of the dents yourself, here's all you need to do:

1) You will need a plunger

The first thing you will need is a plunger which you can find in stores or online for around $5-$10. It doesn't have to be too big, but make sure it can cover the dent on your car completely. You don't want to miss any areas because this will make the job more difficult.

2) Locate where is the dent located on your car

Please take a closer look at your dent and try to find out which part of your car's body it is on. For example, is it near the gas door? Or where you put down your windows?

Placing the plunger takes some time, but once you have it situated, press down using all your strength. Make sure to put enough pressure so that you can't see or feel any of its surface area. It won't work effectively if you can see parts of its outer coating. It just needs to seal up the surface against flatness.

4) Remove the plunger slowly and carefully

Once you have applied all your pressure on top of the plunger, carefully remove it by pulling out slowly from underneath itself, facing upwards. Take extra care because there might be some liquid coming off the object you are trying to fix.

5) Check if the dent is gone

After removing it, check whether or not you could remove the dent successfully. You can also inspect under the plunger for the liquid trapped inside the object's crevice after pushing it down on top of itself. If your result is successful, no liquid will be seen underneath because it would have all been pushed out by force. It might look like magic because it does work quickly!

6) If the dent is still visible

if the dent is visible, repeat steps 1-4 again. This might require multiple attempts before succeeding, so don't get discouraged when you don't get instant results the first time around. Be patient and follow these instructions precisely to get good results in the end. Although it might sound like removing car dents is a simple job, there are several things to keep in mind for successful results and to prevent undesirable outcomes, including:

It would help if you ​used a plunger that is not too big and not too small for this task. You don't want to go too big because it will be difficult for you to place it properly. It also needs to seal the dent so that no liquid can escape underneath when applying pressure. If you use one too small, then the plunger won't give your car the necessary pressure needed to remove it successfully.

Alternatively, if you don't have a plunger at home or don't feel like buying one, you could try using another object with a similar shape. Instead of placing this object on top of the dent, place it underneath your car's surface area against its body.

You can use a few books or an object with equal thickness as the dent to push down on top of it. Ensure there is enough pressure, so that were you able to see its surface area before now, none of it is visible anymore, and the dent should have come out.

3) Be careful on how hard you press

When placing your plunger or any other object's surface against the dent, you need to be gentle and not too forceful. If you apply too much power, this could lead to further damage, including scratches on your car's body or even chipping off some of its paintwork or metal parts.

The plunger must be pressed down mostly by its surface area against the dent. Once it manages to create a good seal, then you can start applying pressure, but be careful about how much force you are exerting.

4) Placing the plunger against flat surfaces for easier maneuvering

Please don't get too carried away when pulling out the plunger from underneath itself. When you pull it out, be careful on how much force you exert because if it goes too far back, then the plunger might not seal properly, which could lead to the leaking of liquid underneath your car's surface area.

Tips to prevent car dents from appearing on your car

There are a few things you could do to prevent dents from occurring in the future. If you have some space underneath your car's surface area, then you can position an object that will have enough pressure over it depending on its size and shape.

For example, if your dent is near a fender or a door, you can place a thick book or even a weightlifting platform against it. Make sure this object is thick enough to seal the surface area around the dent so that it will not come loose while pushing down on top of it with your plunger.

If you only have one free hand, use your arm instead of your hand to apply pressure over the plunger. This will give you more strength while still being gentle enough not to press too hard and damage the surface area around the dent.

How to Fix a Small Dent in Your Car Without Spending Too Much? FAQs

This section answers a few of the most common questions people have about this topic.

Can I remove dents from my car at home?

With the right tools and steps to follow, small dents can be removed at home with a few materials. You will need a plunger and other tools such as rags, wine cork or rubber eraser, and a heavy object to set under your car.

How much does it cost to fix a small dent in a car?

The cost to repair a small dent depends on the size and depth of the dent. The average price for this service ranges from $50 to $100.

Is it worth fixing a small dent in the car?

If your car has small dents that are only noticeable up close, it is probably not worth getting repaired. Small dents can be removed easily and cheaply with a plunger. However, if your car has deeper dents that affect its aerodynamics or structural integrity, then you might want to get in touch with a professional to remove them.

How long does it take to fix small dents?

It usually takes less than an hour to fix small dents on your car. Some can be removed within 5 minutes or less, while others might take longer depending on their depth.

What causes small dents in cars?

Small dents can appear on your car for various reasons. They could result from accidents, hail damage, or they might been there since you got your car. They are also called door dings or stone chips caused by flying pieces of gravel or rocks.

Dents that affect the structural integrity of your car might lower its value. However, some professionals can remove them without affecting the paint on your car's surface area. This is why it is not entirely fair to say that dents reduce the value of a car because they don't always do so.

How do body shops fix dents?

Body shops use special techniques to remove dents. The first step is to go underneath your car's surface with a thin tool that has teeth on one side. Next, this tool is passed underneath the dent to be lifted. After this, body shops use special glue to attach a small piece of your car's surface area over the dent to prevent water and other elements from damaging it. This process can take up to a few hours to be completed.

Is it worth fixing a dent in a car before selling it?

If you plan to sell your car shortly, then getting small dents repaired before doing so is a great idea. It will increase the value of your car while also making it look more attractive. However, you should keep in mind that doing so requires time and investing money into this process.

Can I fix small dents with a hairdryer?

While hair dryers can remove small dents, it is not recommended. You should use this tool only to dry the affected area of your car because applying heat to dents can lead to more damage.

What is the best way to remove small dents on the car?

The best method to use for removing small dents is using a plunger. You can find these at hardware stores, and they work by sucking out the dent from the other side of your car's surface area.

Will CarMax buy a car with a dent?

CarMax and most other car dealerships will not buy a car with dents in it. This is because they reduce the car's value, so dealerships usually offer lower prices when they purchase cars. So if you want to sell your car, you should get rid of all dents first.

Fixing small dents on your car without spending too much money is possible. You can use a plunger or other tools to remove these for free at home, but if the dent is deeper and affects the structural integrity of your vehicle, you should contact an expert who has more experience with this type of work.

Smaller dents might not affect the value of your car as much, so it may be worth getting them fixed before selling it. However, if they are deep enough to lower their resale value, you should consider taking care of those first before trying to sell them.

Dented cars also lose their appeal when viewed by potential buyers, which means that fixing one now could pay off in the future!