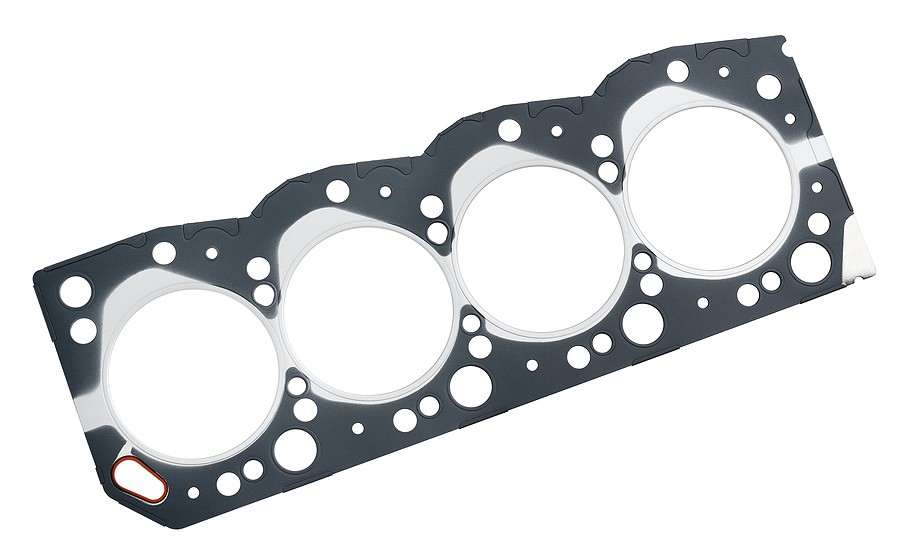 Head gasket problems can be extremely frustrating. For such a small part of your vehicle, it does a very important job. If something goes wrong with your head gasket, the resulting damage can be extensive. As well as expensive. Part of the frustration that stems from head gasket problems is the fact it's a pretty inexpensive part on its own, but getting it installed can be a very pricey job. And when it does go bad, it can cause a number of different issues ranging from overheating to lack of power to oil leaking from your head gasket.

Let's take a look at what exactly your head gasket does, all the ways it can go wrong, and what you can do about getting it working again properly.

Modern head gaskets are made of an elastomer substance layered with very thin sheets of steel. They are what seals the gaps between the cylinder head and the engine block itself. The gasket is mostly made up of large holes that fit around the cylinders themselves and there's only a small bit of material there to ensure you have an airtight seal between these two parts of your engine.

When the head gasket is working properly and in place it maintains the pressure inside the cylinders of your engine. Your combustion chamber requires precise pressure in order for the combustion reaction to take place exactly the way it needs to in order to power your vehicle. When you lose pressure as a result of damage to your head gasket, it can throw off the timing of your engine as well as lead to fluid leaks including both coolant and oil.

A head gasket itself is an inexpensive part. You can find brand new head gaskets on a site like AutoZone for between about $20 and $50 depending on the make and model of your vehicle. But, because the head gasket is located where it is, a mechanic will have to take your engine apart to get at it and replace it with a new one if something goes wrong. That's why it's such a time-consuming and expensive repair job to replace a head gasket, even though it's a small and relatively inexpensive part all on its own.

Modern head gaskets are fairly good at standing up to typical wear and tear that your engine has to endure. Things like high temperatures. However, if your engine is running too hot this can cause excessive wear on your head gasket.

If you have an older vehicle then you may have a head gasket that's made out of something like graphite or asbestos. These are also fairly efficient at handling high temperatures, but they are less durable than modern head gaskets.

Two of the biggest problems that a head gasket can deal with that are going to cause it to crack and blow out on you are extremely high temperatures or harsh conditions such as exposure to coolant with an unbalanced pH. If you don't change your coolant regularly and it becomes contaminated, the mixture can become acidic enough to start wearing down the elastomer material in your head gasket. As the head gasket weakens, because it's under pressure the material can suffer cracks and breaks that result in a loss of pressure and leaks.

Signs and Symptoms of a Bad Head Gasket

If your head gasket has blown on you there are some signs you can be on the lookout for to let you know that you have a problem.

Overheating: Overheating is both a cause and a symptom of a bad head gasket which makes it unique. Overheating can lead to the gasket wearing down, but once it has blown and cracks are formed then coolant and oil can begin leaking through those cracks. The result of that is that your engine is no longer able to maintain its temperature and it will begin overheating even more. If you're noticing that your engine temperature is routinely in the red, then you should think about having your head gasket inspected.

Bad Oil: When the oil and coolant begin leaking through the cracks in your blown head gasket they're going to mix together. That means that when you go to check your oil next and you pull the dipstick out it's not going to look the way it's supposed to. Instead, you're going to have a frothy, creamy sort of mixture that looks a bit like a milkshake instead. This is the result of coolant contaminating the oil and you'll need to replace your oil with new, clean oil in order to fix it.

Bad Coolant: Just like coolant will mix with your oil, the oil is also going to get into your coolant reservoir. When this happens, it tends to build up on top of the coolant. You'll notice a slick on top of your coolant in the reservoir that looks like mayonnaise. It will probably be on your radiator cap as well. You'll have to do a full coolant flush to get it cleaned out.

Poor Engine Performance:  Because the head gasket is in place to maintain the pressure in your combustion chamber, when it blows on you that pressure is going to be sacrificed. That means you could suffer things like engine misfires and other problems with your combustion reaction that lead to a decrease in your engine performance overall. Without the pressure to adequately help the pistons rise and fall of the cylinders you can have a combustion reaction occurring when the piston is no longer in the right place. The result of that will be your engine's power output will go down and you'll find your car struggling to perform the way you're used to. Acceleration will be more difficult, as will doing things like going up hills or towing anything behind you.

Leaking oil and coolant: Although not as common as some as the other symptoms, when your head gasket is cracked badly enough you may find that oil and coolant are leaking externally down the outside of your engine as a result. This problem can be deceptive and may be hard to diagnose even by a skilled mechanic, however. Sometimes a leak that looks like it's coming from the head gasket may in fact be caused by a cover gasket, or potentially some valves or tubes that have sprung a leak as well.

How Do You Stop a Head Gasket from Leaking Oil?

When your head gasket is leaking oil you're going to want to get it fixed as soon as you can. There are essentially two ways you can go about fixing a blown head gasket. These very much depend on the nature of the damage to your gasket in the first place because that will affect how you approach the issue.  Essentially your two solutions are to either repair the head gasket or replace the head gasket. Some head gaskets can be so badly damaged that repairing them will simply not be an option and replacing it will be the only choice you have. Of course, these have drastically different costs associated with them as well which should be taken into consideration as you plan your repair job.

What Does it Cost to Fix a Blown Head Gasket?

Fixing a blown head gasket depends on the kind of fix that you are going to undertake. As we just said there are two potential ways that you can fix the damage to your head gasket. Repairing a head gasket is much cheaper than replacing one, but it's not as guaranteed to work as replacing it will be. Let's take a look at the differences between the two and what they're going to cost.

Repairing a Broken Head Gasket: Because a head gasket is a very thin item that is wedged between the cylinder head and the engine block itself, repairing it is potentially a possible solution. You can buy something called a head gasket leak sealer which may get the job done for you depending on how badly damaged your gasket is.

Once you're sure you have the right kind of leak sealer all you need to do is empty the bottle into your radiator. You'll have to follow the instructions on the particular brand you buy exactly. There are different kinds, things like Blue Devil or Steel Seal. Each one will have explicit directions on the label, and they do need to be followed exactly. Many drivers have bought these products in the past and not done exactly what the instructions listed which in turn led to the product not working properly.

If you do follow the instructions exactly what's going to happen is that as you run your engine, typically for about 15 minutes to 30 minutes, the leak sealer will travel along the coolant lines from your radiator into your engine. Once it reaches your head gasket the substance will fill in all the cracks that have formed in the gasket and begin to solidify In the heat of your engine.

Once the leak sealer has hardened, the repair job will be almost as good as having a new gasket. This of course depends on the kind of leak sealer you bought because there are some brands that perform better than others. This will also depend on how badly damaged your gasket was. If there were big enough cracks and holes in it, the leak sealer may not be able to fill it all in to do the job. If it's too badly damaged, then replacing the head gasket may be your only option.

One thing you should know is that these liquid leak sealer substances aren't necessarily a permanent solution. Most of them will buy you some time, but you can't really guarantee that they're going to maintain the seal for years to come. Some of them do advertise themselves as near permanent solutions though, so make sure you're reading the label to find out what will work best.

Replacing a Head Gasket:  If the head gasket can't be repaired with head gasket leak sealer then you're going to have to go to a mechanic to get it replaced. Typical head gasket replacement will cost you anywhere from about $1,000 to $2,000. The bulk of this is labor because it's an extensive repair job to get into your engine to replace the gasket.

Is it Worth Fixing a Blown Head Gasket?

With some more expensive repair jobs some drivers would question whether or not it's even worth it to get the job done at all. In terms of a blown head gasket, it absolutely is worth it to get this job done. Driving with a blown head gasket can be very dangerous for your vehicle and can end up causing a lot of damage in the long run. You risk your engine overheating and serious damage to your cylinder heads, cylinders, valves, pistons as well as your coolant system and your oil as well.

If a blown head gasket leads to extensive engine overheating you could end up causing yourself to require a full engine rebuild. That could be something that costs you many thousands of dollars to repair.

Fixing an oil leak in your head gasket really depends on the nature of the damage that resulted in a leak in the first place. If you're lucky you'll be able to get this done quickly and efficiently with a bottle of head gasket leak sealer. That's only going to cost you between about $50 and $100 to buy. Unfortunately, if the problem is too bad then you're going to need to replace the gasket and that's going to cost you considerably more.