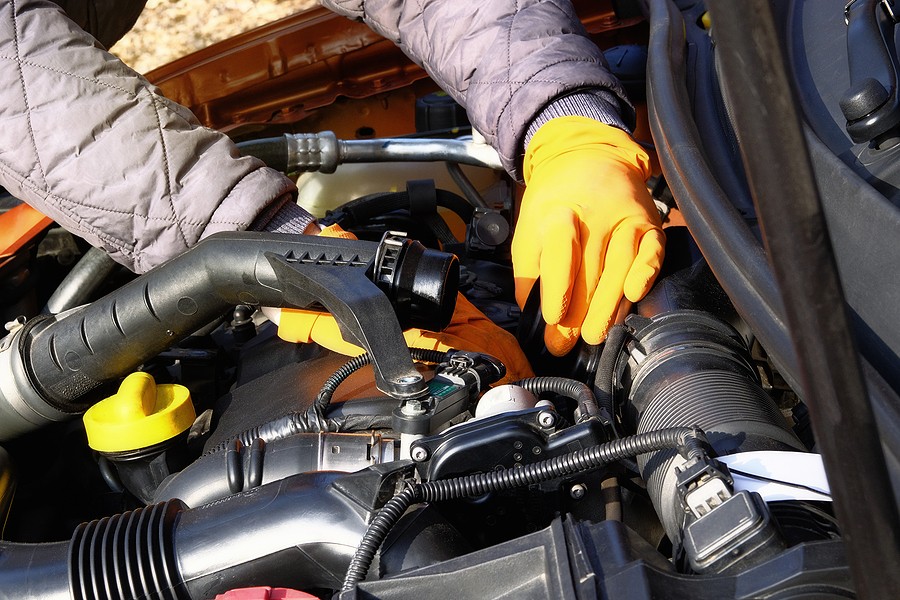 If you turn the key in your ignition one morning to find that it takes several tries to turn over, or if the car simply won’t start at all, it may be due to a faulty or dirty Mass Airflow sensor. A faulty sensor can wreak havoc with your vehicle’s performance. It can cause your engine to drag and it can cause your car to jerk when it accelerates. It can also cause the engine to receive too much fuel and too little air or too much air and not enough fuel.

One major sign of a bad airflow sensor is if your check engine light comes on. The code for a bad sensor is always between P0100 – P0105.

What an AIrflow Sensor Does

A MAF is an instrument used to gauge the mass flow rate of air coming into an engine.

The data a MAF measures is crucial for the engine control unit to stabilize and deliver the appropriate fuel mass to the vehicle’s engine. Air alters its thickness with temperature and pressure. When it comes to cars, air density may vary depending upon the temperature, the altitude of where you are, and the use of forced induction.

It is located on a car’s intake valve. When the air is sucked in, the computer will know how much air is being taken in so it knows how much fuel to dispense.

Automobile engines have two different options for MAFs. They are called hot wires and vane meters. They do not measure the mass air directly.  Instead, they employ other sensors and inputs to determine the flow of air. Both options are found in cars that have electronic fuel injection engines. They are similar in that they incorporate an intake air temperature (IAT) sensor in their construct.

When an oxygen sensor works with a MAF, the engine's air to fuel quotient can be measured quite accurately. The MAF will foresee the measured airflow to the engine control unit. the oxygen sensor will provide information that will make corrections to the predicted air mass.

What You Will Need to Clean Your Sensor

You should clean the MAF often. It should really be a part of your car’s regular maintenance regime. When you clean it you will need a can of airflow cleaner, a towel, and a basic tool kit including screwdrivers and a wrench. You will find a wide variety of spray-on air sensor cleaners at any automotive shop.

To determine if cleaning the sensor does some good, you may want to use an OBD 2 scanner. The scanner will tell you such things as the engines RPM as well as the engine’s coolant temperature and intake air temperature. You will simply turn on the car and let it run for a few minutes to get these numbers. Be sure to write the results down. You are now ready to begin cleaning.

Make Sure Your Car’s Engine is Off

The first thing you should always do when cleaning, repairing, or replacing a component is to make sure to turn off the engine of the vehicle. It is also important to let the engine cool off before you begin.

You can find the specific location of your airflow sensor in the car’s owner’s manual. You will always find it on your intake. You will look for a long tube that goes to your airbox. attached to the airbox, you should see a small black box that says airflow on it. It will have wires attached to the top of it by a wiring harness. This is the cover of your mass airflow sensor.

There will be a clip attached to the top of this wiring harness. Release the wires from the air sensor cover by pushing down on that clip. Once you have released the harness, you will then remove the airbox along with the mass airflow sensor.

The tools you will need to remove the airbox will vary from car to car.  Some cars have airboxes that can be pulled right out and others will require the use of Phillip’s head or flat head screwdriver. Unscrew the MAS from the air intake hose and lift the airbox with the attached MAS out of the engine.

Once you get the airbox off, turn it over and you will see a small cylinder with a couple of wires at the top of it. This is the mass airflow sensor. Those wires are the hotwires and they are what you will want to clean.

Whatever you do, you should never touch the airflow sensor. Shake up your can of airflow cleaner and spray it on the sensor for a few seconds then wait 15 minutes for it to dry. Then spray the sensor for another few seconds and wait for it to dry again. Never use anything but mass airflow sensors cleaner to clean this component.  Do not reconnect everything until it is completely dry.

You can then hook your scanner back up and see if any of the readings have changed. If you do not have a scanner, you can simply try driving the car and see if cleaning the sensor has helped to solve the problem.

If cleaning the MAF does not work, you may want to consider replacing the component. A new filter can cost anywhere from $100 to $400.

There are many different issues that can cause a car to stall, not start or have engine hiccups. Before you decide to replace the mass airflow sensor, you can have your car inspected by a mechanic for a price that normally ranges from $100 to $200.

There are some car parts that have a predicted life expectancy that will be listed in the owner's manual. Most MAFs do not have a listed life expectancy. A MAS may last the lifetime of the car, but it may need replacement after a year or two.  If you end up needing a new mass airflow sensor, you can replace the unit yourself or take it to a professional mechanic. The component should only take about 15 minutes to replace.

What Causes a Mass Airflow Sensor to go Bad

The wires in a Mass airflow sensor are easy to damage. This is the reason you should never touch the component when you are cleaning it. Remember, the MAF monitors airflow and that means that a lot of air and dirt run through the tiny part every time you drive.

Positive Crankcase Ventilation is also important to keeping the MAF safe. The crankcase contains the car's motor oil. You will find it at the base of your engine. When a person operates a car,  waste gases are emitted and those gases leave the engine through the exhaust pipe.

Some of those gases do not exit, instead they find their way into the crankcase. If the PCV valve is blocked up, it can result in crankcase vapors backing up through the breather system. If the valve is corroded by all the debris, it can make for oily deposits on the MAF.

Can I drive with a faulty air sensor?

If you are unable to pay for a new mass airflow sensor, you may wonder what will happen if you drive with a bad filter. You may be able to operate the car for a little while, but you should get the part replaced as soon as possible.

A faulty sensor can cause the engine’s computer to miscalculate the amount of fuel the engine needs. The engine will then default to a generic fuel map. It won’t know how much gas you use and that can cause your car to run rich and get too much gas. Not only is this expensive, but it can also destroy a car’s engine.

When your engine runs rich, the unused fuel has to have a place to go. Soot will build up and get into the catalytic converter and this can ruin it.

A catalytic converter is an exhaust emission management component that transforms gases into less toxic gases. If the converter gets clogged up,  it will not be able to do its job and the car may not pass its emissions test. You will have to either replace the converter or get rid of the car. Replacing a converter can cost anywhere from $2000 to $3000.

Getting Repairs Done to Your Car

If you decide to let a mechanic replace your MAF, you will have a choice between taking the car to a mechanic, an auto body shop, or an independent contractor. A dealership is normally the most expensive option, but a mechanic at a dealership is likely to know the most about your particular make and model of car.

An auto body shop will charge less money and you will be able to talk to the mechanic directly. Just make sure to get references from them and ask if they have worked on a car like yours before.

An independent mechanic doing business out of his or her garage can probably handle replacing a MAS. Just make sure that they give you an estimate and a guarantee in writing and upfront.

A Mass airflow sensor will sometimes go out at the end of a car's life. If this is the case, you will want to get a new car. You will have a few options for getting rid of your old clunker.

When you buy a new car, the dealership will give you a trade-in allowance. Before you visit the showroom, you should get an offer or two from independent buyers and a junkyard.

A dealership may count on your trading the car in at a low price to avoid the hassle of selling your car.

A dealership may also offer you what seems like a fair price only to tack that same amount of money back onto the total price of the car. Read each line of your price breakdown carefully.

There are a few websites on which you can list your car. They will charge you a monthly fee to run your ad. Selling your car this way can take months as you will have a lot of competition.

Remember that you will have to show the vehicle.  You may not be able to sell it to the first person to whom you show it. It can be very dangerous to sell your car online. Criminals have used online sites to find their mark.

Cash Cars Buyers can give you a great price for your old wreck. Simply fill out the online form. We request your name, email address, and phone number. You will also be asked for the make, model, VIN number, and year of the car.

We will call you right away with an offer. If you accept that offer, we will make an appointment with you to pay you in cash and tow the car away for free. It is just that simple, so call us today.