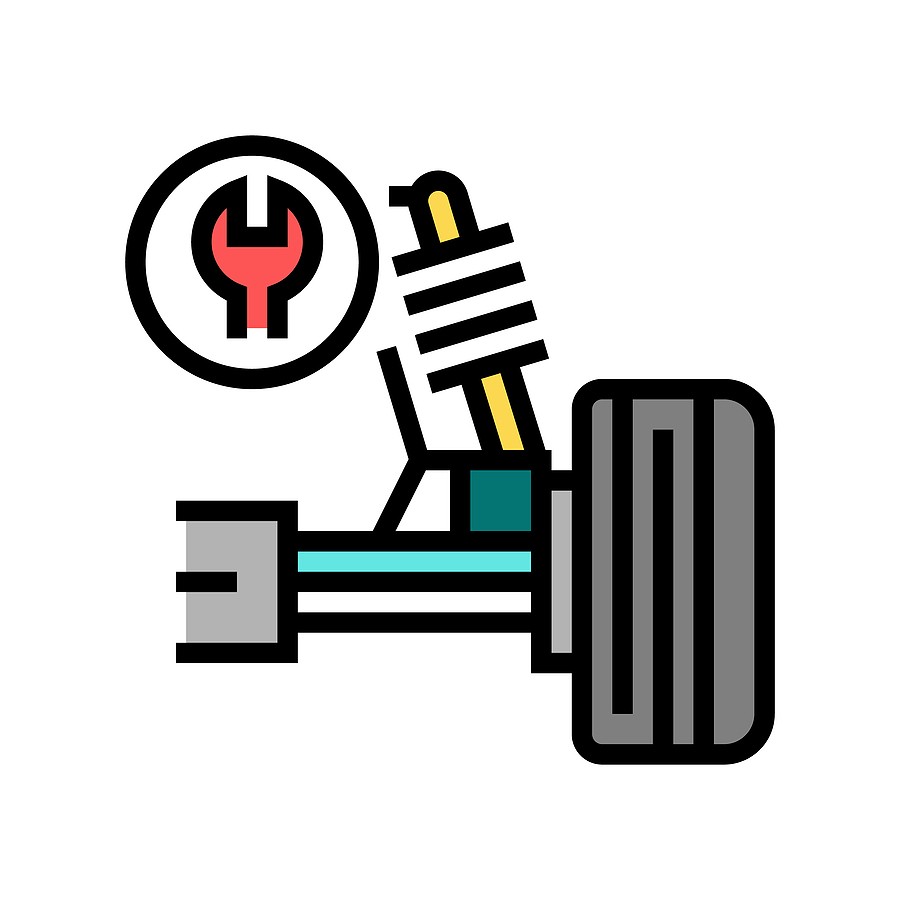 The ball joints in your car are what connects the control arm to something called the spindle that allows your wheels to turn and also move up and down. That up and down movement is important as you're going over uneven roads. Ball joints can wear out over time as they do handle a lot of stress. They have to hold the entire weight of your car after all.

If you suspect that your ball joints are starting to fail on you, it's not that difficult to check them out on your own rather than taking them to a mechanic to get them looked at. This kind of routine maintenance and observation lets you get a good idea of how your car is performing and will make sure you can avoid major failure down the road by allowing something to sneak up on you. When you know the condition of your vehicle and its parts, you can get things fixed when they start getting bad before they fail completely. With that in mind, let's take a look at some of the symptoms of a bad ball joint that can alert you to a problem, and how you can check them out so you know for sure.

What Are the Signs of a Bad Ball Joint?

When your ball joints start to fail there are a few signs and symptoms you can be on the lookout for to let you know what's going on. Some of these symptoms can be caused by other issues in your suspension as well, so you may need to pay some close attention to exactly what's happening and, of course, give your ball joints a quick inspection which we’ll tell you how to do shortly. But obviously you're not going to inspect your ball joints unless you have a reason to so let's take a look at what can happen that could make you suspect you have a problem in the first place.

As with many parts of your car, when your ball joints fail they're going to start making a sound that alerts you to a problem. You should be familiar with the sounds your vehicle makes by now so that if something goes wrong, you're aware of it and can react accordingly. When it comes to your ball joints, one of the first things that you'll notice when they're wearing out is that they make a clunking or metallic kind of grinding sound. This will typically happen anytime you go over really uneven parts of the road like speed bumps or potholes, as well as when you take turns in your vehicle.

As part of your car suspension, the ball joints help keep everything operating on a smooth and even keel. However, if you have worn out ball joints then a loosened stud can start moving around inside the bearing. That will make your entire front suspension vibrate and if it gets bad enough you'll even be able to feel it in your steering wheel. Anytime your steering wheel is shaking when you're driving, you have a suspension problem and you are going to need to get it looked at fairly quickly.

If the inner or outer edges of your tires are wearing out unusually fast compared to the rest of the tire that means your car is riding on those edges unevenly. A bad ball joint could be responsible for your tire having an unusual camber that causes it to bend in or bend out in a way that means the whole surface is not riding on the road as you drive.  This one can be hard to diagnose however because there are a few reasons why your tires might wear out unevenly. In particular, if you're noticing that both the inside and the outside edge are wearing out while the centre seems fine then it's not necessarily an issue with your ball joint so much as a problem with your tires being improperly inflated.

It should come as no surprise that if your ball joints aren't working properly, you're going to have problems driving your car the way you want to. The ball joints connect the control arm to what's called the knuckle which allows the movement of your steering wheel to translate into the movement of the wheels. When they fail that means that your steering is not going to be nearly as responsive and you might find your vehicle veering off in one direction or another even though you're not steering in those directions. As you can see, this could be a serious danger on the road if it happens at the wrong time. The last thing you want to do is try to steer away from an accident in a dangerous situation and find that your steering doesn't do what you're expecting it to do.

How to Check Your Ball Joint

Checking your ball joints is not a super difficult task but it can be intimidating to many drivers. That's because you need to get up under your car and for a lot of DIY home mechanics, this is something they're not accustomed to doing or interested in doing. Working under the hood is one thing but getting your car up on jack stands takes it to a different level.

Getting your ball joints inspected is fairly simple once you get your car up on jack stands. You only need a flat head screwdriver or a 2 X 4 to get it done once you have the car jacked up. As far as jobs go on your car, that's pretty easy.

If you head to a mechanic, they're going to use something called a dial indicator to check your ball joints. That's not the kind of tool that you're going to have in your garage nor is it an easy one to rent or buy anywhere, so we're just going to ignore that for the purposes of this guide because the odds are you don't have one and are not interested in getting one.

The way you raise your vehicle if you're going to check your ball joints depends on the kind of suspension that your car has. If you have what is called MacPherson struts and the coil spring is supported by an upper control arm then you need to raise and support the frame of your car by the jacks and jack stands. You don't want to use the lower control arm to support it.

Now that your car is supported properly, make sure those jack stands are secure and steady, you can go about the business of actually inspecting the ball joints.

Step 1:  You should consider having a friend help you out with this job before doing it. This works best with an assistant but in a pinch, you could always use your cell phone. If no one is around to help you then you need to point your phone at the ball joint while you're doing this test so that you'll be able to film it and check later to see what happens.

Step 2: Start by checking your ball joint for any horizontal play. You can grab your wheel at the top and bottom, the twelve and six position and rock it in and out. If you hear any clunking or grinding sounds or if you see the ball joints actually moving excessively then your answer is pretty clear. However, if you can't really tell if there's a problem, then you'll need to move on to a more detailed test.

Step 3:  For a little more of a detailed look at whether or not you're having a problem with your ball joint you can do a screwdriver test. Place a flat head screwdriver against your control arm and get the tip under the edge of the knuckle. Move it up and down a little bit and see if the ball joint moves up and down. If it does, then you've got something loose in the bearing.

Step 4:  You can check your ball joint for vertical play with the use of a two-by-four. Put the 2X4 under the tire and very gently lever the wheel up and down. The key to this is gentle. Your car is on jack stands right now, and the possibility that you can knock your car down is very real. That can cause damage to the car and injure you in the process. So, when we say gentle, we mean gentle.

Move the wheel up and down and see if you get any excessive play from the ball joint. If you do, then you definitely have an issue that is going to give to be looked at by a mechanic.

Do I Need an Alignment After Replacing Ball Joints?

If your ball joints fail completely then you can suffer a catastrophic loss of control or your vehicle. In fact, if it's serious enough, the entire wheel could come off your car while you're driving. You can imagine how dangerous that can be. So, if you’re experiencing those symptoms of a bad ball joint you should get it taken care of as soon as you possibly can before a bad situation gets much worse.

When you head to a mechanic to get your ball joint replaced, you're probably going to be paying about $100 to $400 in repair bills. This depends on the make, model, and year of your vehicle and the mechanic you take it to. A ball joint replacement is a fairly quick job that may only take about an hour or so. It's also possible you can get this done on your own at home. The parts could cost you considerably less and you can find some videos online that can walk you through the process if you feel up to the task.

Now that you know how to check your ball joints, it should be a fairly simple process to figure out if they're causing the problems with your steering and suspension or if you may have something else like a loose wheel bearing or bad struts. Whatever the case, knowing what potential problems you're facing and how to deal with them is always helpful and doing any kind of routine car maintenance and repairs.