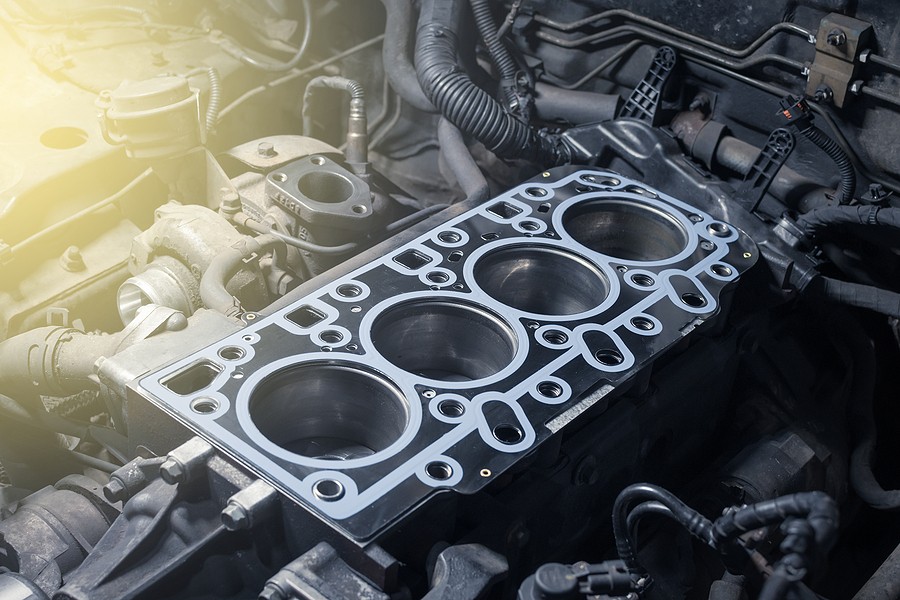 Head gasket problems sometimes surface in vehicles. With a blown head gasket, you may see leaking oil under your car. You might also observe high operating temperatures and mixing engine fluids. It happens when the piece becomes dry. Head gasket replacement costs are as high as $2500.

The problem of a blown head gasket can cause a real head ache.

Both former and current Dodge Neon owners know all about head gaskets and what happens when they do not work as designed. Certain models in the mid to late 90s were famous for the head gasket problem. The thin part keeping everything in its place would crack, letting antifreeze and engine oil mix.

These drivers watched their cars slowly deteriorate due to head gasket troubles. First it was the oil leak. Then it was the white exhaust. Finally, antifreeze mixed with the engine oil causing the vehicle to lock up on the side of the road.

When it comes to identifying whether the head gasket has a leak, figuring how it got that way, or estimating the cost of the repair, the research is a good idea. You may find that the repair isn’t even worth the high price tag.

The head gasket separates the engine block and the cylinder head. All contemporary vehicles have them, and they come in all shapes and sizes. That’s good to know when looking to the cost of head gasket replacement.

Why Do Head Gaskets Break?

The high head gasket replacement cost might have you wondering how this part even broke in the first place.

It is made out of a material that doesn’t normally bend or buckle under heat and pressure. In fact, head gasket repairs are kind of rare in most vehicles. There is usually a problem with the manufacturing process when they do not work.

The head gasket breaks when a leak develops due to the constantly changing temperature and pressure impacting the part.

Catching a peek at that old head gasket isn’t so easy… that’s because it’s nestled in tight. The engine has to be taken apart to get to the head gasket. In fact, that’s what makes the repair so costly.

The actual head gasket piece often does not cost too much. It’s the labor that drives up the repair bill.

The head gasket usually breaks because part of the piece is damaged. After the heat and pressure build up, a leak begins, causing a lot of other problems.

For this reason, drivers should repair head gasket problems right away. If they’re not sure if they have a bad head gasket, they could visit a mechanic or check for these common symptoms of head gasket trouble.

Signs the Head Gasket is Bad

There are a few telltale signs that you’ll soon be talking over head gasket replacement costs with your mechanic:

Many symptoms can tell the mechanic a little more about the problem. For example, white smoke coming out as exhaust indicates that engine coolant is entering the combustion chamber each intake stroke. In this case, the exhaust smells like candy. A lot of smoke means a bigger leak.

Internal head gasket leaks can bring air (gases) into the coolant. When this happens, you might observe bubbles or hear gurgling. It might even seem like boiling water (even when cool).

A coolant leak could be a sign of a blown head gasket. It could, though, be the indication of a slew of car-related problems. To be sure the engine coolant leak is related to the head gasket, the mechanic will check the other tubes and hoses to ensure there aren’t other problems at play.

There are few situations more stressful than being stranded on the expressway with an overheated engine. You can’t open the hood; you might burn yourself. Do you have antifreeze on you? How will you get it? Know the cause: The overheated engine could be caused by the head gasket.

You will probably see this happen on a lengthier drive. Essentially, the radiator doesn’t work the way it’s designed when the head gasket is on the fritz, so the temperature of the engine rises and rises until the dashboard panel is beeping at you that it’s time to pull over.

When the oil looks like cream, the head gasket isn’t supreme. Coolant makes its way through the piston rings and eventually reach the oil; the reaction inverts the engine oil’s dark yellow – a creamy white look that means you’ll be calling your mechanic for assistance.

Little white dots on the spark plug indicate that coolant has burned inside the engine’s combustion chamber. This doesn’t always mean head gasket problems, however.

How Long Can I Drive with a Bad Head Gasket?

You shouldn’t, for starters. If you’re worried about the cost of head gasket replacement, don’t drive around town if yours has already gone brittle.

If you must, consider the status of the symptoms. Do you have a very small oil leak or puffs of concerning white smoke escaping from engine exhaust just ever so often? Or, do you have a car that overheats on the coldest of winter days after running for five minutes.

If the engine is overheating or any other symptom is extensive, call a mechanic or a tow truck. The risks of getting stranded or damaging your engine even more seriously aren’t worth the risk.

Final word: Can I drive my car with a blown head gasket? Maybe, but you shouldn’t. Ask a mechanic if you’re stuck on this.

How Much does Head Gasket Replacement Cost?

Maybe a mechanic has just mentioned the words head gasket and now you’re sweating. How much does head gasket replacement cost?

A quick Internet search turns up some rough approximations. For example, the parts alone are about $300. The entire repair can cost from $1200 to $2500, depending on your car and where you live. If there is head or block damage as a result of the blown head gasket, you may pay even more.

If you’re good at numbers, you may have noticed that the part itself isn’t as expensive as the repair.

The complexity of the job, the amount of time it takes to change the part, and the variations of each make and model are what drive up the cost of head gasket repair.

For example, some cars have multiple heads. Others have engines in which the head gasket is especially difficult to reach.

The head gasket causes many, many problems when it leaks. You will be paying to replace belts, seals, and water pumps along the way. The costs can really add up fast!

You certainly can! It may not work so well, however. These quick-fixes are “guaranteed,” but it really depends on the problem you have. They also require some mechanical knowledge as manufacturers state that a full cooling system flush (and taking off the thermostat) are required.

Long story short, this isn’t really a do-it-yourself project. If you’re not a professional, call a mechanic.

Some Cars Have Bad Luck with Head Gasket Issues

There are several forums and message boards where professional mechanics like to trade stories about the types of car engines they’ve seen over the years. Here are some makes and models they often discuss when someone brings up bad head gaskets, according to Consumer Reports.

Without years, the Chevy Cruze, BMW X5, and the Infiniti M are also mentioned.

The same report adds that most repairs for the bad head gasket run from $2000 to $4000. If your car is older, as those on this abridged list are, it may not even be worth it to go ahead with the repairs at this point.

Is it Worth Fixing a Car with a Broken Head Gasket?

A car with a bad head gasket is not always one worth keeping in your life.

Plain and simple, this is a big repair. Many times, when the problem is the manufacturer’s fault, a recall or service notice will be issued. This generates notifications for the car owner that there is a need to repair the vehicle due to a factory defect; usually this is paid for by the company that built the car.

If it’s covered, you may as well as get the free repair. Watch out for the other problems that may arise with blown head gaskets like bad seals or broken water pumps.

It’s a question of investment, finances, opportunity cost, and timing.

For example, do you want to pay $3000 to repair a car that is only going to sell for $2500? Then again, how will the kids get picked up from school if this car isn’t repaired? Could you use the $3000 as a down payment or combine it with savings to obtain a more reliable vehicle? Make an economical decision!

Then again, maybe your car is a classic ride, your dream car, or a family heirloom. In such cases, it’s important to the driver that the car remain on the road and under their name. It sounds like paying the bill is the right way to go.

If the situation is showing the vehicle owner that the head gasket repair cost just isn’t worth it in the end, then there are other routes to consider.

Firstly, you could sell the car to a mechanic. Some people will even give the car to a handy mechanic just to get it off their hands.

You could drive the car until failure. This isn’t recommended. What will you do if the car dies on the side of the road? In the twenty-first century, having an old car sitting on your lawn or out in the alley is not a good look.

Perhaps the answer is to send the car to the junkyard, letting it rest in peace. Today, it’s easy to find a reliable junkyard or tow truck via the Internet. These companies are known for offering payment for used vehicles in almost any condition.

The good news is that junkyards are surprisingly easy to find. Many will come directly to you, take the old car with the busted head gasket, and ship it off so you never have to deal with it again. The best part? They pay cash money.

The car will have its valuable parts removed and then be demolished for auto recycling. It can be a win-win situation for all involved.

What Should I Do About a Blown Head Gasket?

If you’re unlucky enough to have to deal with a blown head gasket, your options are plentiful. You can check for warranties and recalls to see if the manufacturer will eat the cost.

If not, you can pay for the repair out of pocket, risk driving around town without getting it fixed (not recommended), or call a junkyard to tow away that broken down engine for good.

The bottom line is that your safety, and your wallet, matter.

Make a decision that allows you to feel secure and safe but also doesn’t leave you broke. It may be an unexpected occurrence, but handling it correctly will make the whole blown head gasket ordeal a lot more manageable in the send.