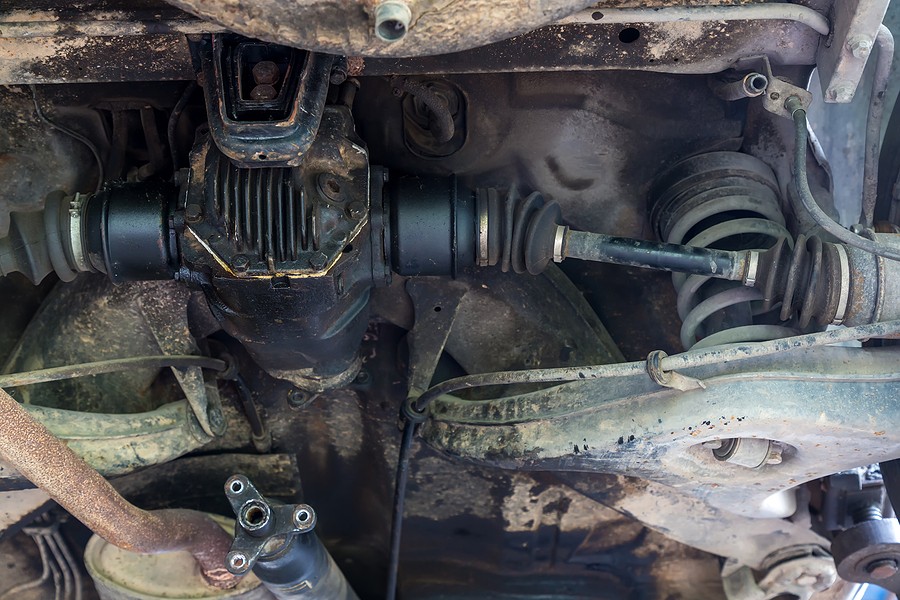 So what is an axle? An axle is a rod that connects two wheels and transfers the power from a car’s engine to propel the wheels. The axle sustains the weight of the car, plus its cargo and passengers, as well as the force when braking and accelerating. The axle may either be fixed to the wheels and rotate with them, or fixed to the vehicle as the wheels rotate around the axle. These axles are supported by the bearings that sit in the middle of the wheels. Needless to say the axles are important components of a vehicle. But the question is how many axles does a car have?

The question may seem to be very straightforward, but is the answer really that simple. It could be a tricky question because of the way vehicles have become more complex over the years.

A vehicle with four wheels is considered to have two axles, but is this still accurate to say for modern cars? Do they more or do they have any axles at all?

The development and design of the axles are done in such a way that it could keep the position of the wheels while carrying the weight of the vehicle. With that, how many axles a car has is different depending on the type of the vehicle based on a lot of factors like how many passengers it can carry or what the vehicle is being used for. Axles are especially customized to perform better at controlling the speed and the torque.

What are the Axles on a Car?

Front Axle: as the name suggests is located at the front of the vehicle. Its function is to assist with steering and to process the shocks coming from the uneven surface of the road. Its four main parts include the beam, the track rod, the swivel pin and the stub axle. Front axles are commonly made of carbon steel or nickel steel as they have to be as sturdy as possible. The types of Front Axle includes Dead Front Axle that stays in place, not rotating with the wheels, and Live Front Axle delivers driving power from gearbox to front wheels.

Stub Axle: are attached to the car's front wheels. Kingpins connect these axles to the front axle. The kinds of Stub Axle include Elliot (uses yoke, kingpin and cotter connecting to the front axle), Reverse Eliot (as the name suggests has opposite arrangement compared to standard Elliot), Lamoine (with L-shape spindle instead of yoke type hinge), and Reverse Lamoine (with opposite arrangement compared to standard Lamone).

Rear Axle: delivers power to the driving wheels and comes in two halves, called half shafts that are connected by the differential. In the majority of cases, rear axles are live, which means they rotate with the vehicle's wheels. There are also other types of rear axles as determined by the support and the mounting methods.

The types of rear axles include Semi-Floating, Full-Floating and Three-Quarter Floating.

The Semi-Floating Axle connects the wheel to the flange bearing on the axle’s exterior shaft and holds it securely. This kind of axle has two. One supports the axle shaft, while the other one goes inside the axle casing. Having two bearings means a semi-floating axle has to be larger than the other types to produce the same torque. These axles are used for SUVs, cars and mid-size trucks, like half-ton and light duty pickups.

The Full-Floating Axle as its name suggests efficiently floats in place maintaining its position, thanks to having two bearings. It transmits driving torque only and tends to work best for bigger vehicles like heavy-duty trucks, some mid-size trucks with larger towing capacities or vehicles with four-wheel drive. Full-floating axles are designed for vehicles that need to handle extremely severe driving conditions or those that need to carry heavy loads. These axles in support of their function are not only quite heavy but also durable. The axle’s housing could support the weight of the vehicle. Its torque is also transmitted through a separate weightless axle shaft. It’s more common for a vehicle to have a semi-floating axle. These axles are able to bear the weight and transfer torque, while weighing much less.

A Three-Quarter Floating Axle is more complex and reliable than semi-floating axles. It aids in maintaining wheel alignment and in handling side thrust and driving torque.

If that is not enough, axles are further classified as drive axles or dead axles. The drive axle extends from the differential up to the tire. They are typically encased within an axle housing that offers it more protection and allows for it to operate much more effectively. They are present on both front or rear wheel drive vehicles and are required to operate both the front and the rear axle. The Constant Velocity or CV axle can technically be considered as a drive axle. CV axles function identically like the drive axles as they both transmit power from the transaxle out to the wheels.

Dead Axle, also called as “lazy axle” on the other hand is a free rotating axle not connected to the engine and is not a component of the drivetrain. It only serves as a support for the weight of the vehicle like that used in trucks and trailers. The rear-axle of the front wheel drive car in general is a dead axle.

One term to also get familiarized with is about a driveshaft which is a split axle that is found between two-half axles that has universal and differential joints. Each half axle is connected to the wheel using a joint of constant velocity (CV). This allows for the wheels to rotate when making turns and to generously move vertically.

The answer to that is — it depends since types of axles are needed by different types of vehicles and the number of these axles also vary. A couple of factors determine which type of axle a vehicle needs, like the technical requirements and the amount of force produced. Some vehicles already have pre-designed axles with standard formats but customized axles tend to work best because they are able to fit the needs and specifications of the car better, like being able to adjust the wheels' speed and torque to a more distinct degree.

Different vehicles also have different types of suspension systems (mechanical connections, springs, and dampers to connect the wheels to the chassis) with different types of axles based on the needs of the vehicle. For vehicles with live-axle suspension the axle’s role is to transmit driving torque to the wheel and to retain the position of the wheels relative to each other and from the vehicle body. Axles in this type of suspension system should also bear the weight of the vehicle plus their cargo.

A non-driving axle, on the other hand, such as the front beam axle that can be found in heavy duty trucks and other vans and two-wheel drive light trucks doesn’t have any shaft, and serves only as a suspension and steering component instead.

The axles on other types of suspension systems only transmit driving torque to the wheels. The position and angle of the wheel hubs is an independent function of the suspension system. This is common with independent suspensions found on the majority of the newer cars and SUVs, and on the front of many light trucks. These systems still have differentials, but will not have attached axle housing tubes. They may be important in a transaxle or found attached on the vehicle frame or body.

The axle shafts that  are commonly constant-velocity type then transmit driving torque to the wheels. Like full floating axle systems the drive shafts for a front-wheel drive independent suspension system do not support any weight of the vehicle.

Majority of modern cars now have a split axle that has universal joints between two half axles. The constant velocity (CV) joint that connects each of these to a wheel has independent suspension, spins when making turns and turns at different speeds. This results in improved tire traction and a lengthier tire life.

So again how many axles does a car have? Driving on a toll road, you will notice that vehicles are being categorized based on how many axles they have, and you may start to question why vehicles are classified this way. After learning the basics of axles it may be easier to determine the number of axles depending on the vehicle type. Most cars or standard cars have four axles or two sets of axles, which helps in rotating the wheel. A simple way to see just how many axles a car has is to look at it from the side and then count the number of wheels it has.

Most cars have four tires or two sets of tires, with one in the front and then in the rear. And two sets of tires equates to two axles. But again the number of axles may vary for different vehicles based on its suspension system and other needs. The number of axles in a car depends on the type of vehicle. In most cases, cars have two axles to rotate the wheels. Larger vehicles that carry more passengers and heavier loads have more wheels and may have more axles.

How many axles does a standard car have?

For the most part, cars have two axles to rotate the wheels but larger vehicles carrying  more passengers and also with more wheels may have more axles. At a glance here are the common number of axles for certain types of vehicle.

2-axle vehicle with 2 axles – examples are bicycles, motorcycles, ordinary cars, light trucks, medium duty trucks (like Chevy Silverado 3500, Ford F-350 and Dodge Ram 3500 as examples with “duallies”), and even some class 8 trucks (package delivery companies that run double trailers, and triples where legal, between terminals tend to use two-axle tractors).

3-axle vehicle with 3 axles – straight trucks with a pair of rear axles to carry the extra weight coming from the cargo, a Greyhound bus, some full-size RVs, and majority of tractor units for semi trailers. 3-axle combination vehicles with small utility trailers also covered. (Examples would be the Ford Focus and Honda CRV). A car like a stretch limousine having three sets of tires also has three axles.

4-axle vehicles with 4 axles – Examples are Tri-drive highway tractors that are often used for oversize loads, dump trucks with lift axles, concrete mixers with two steer axles and two drive axles. A 4-axle combination vehicle could also be standard highway tractors with single-axle trailers, 2-axle shunt trucks moving standard 2-axle dry vans around in a trucking company's yard or at a distribution center, or a pickup that has a 2-axle travel trailer.

Big freight trucks have 5 axles in total — 3 located on the truck and the other 2 on the trailer. An 8-wheeler also has 5 axles — one located in the front, 2 in the middle located at the location where the trailer is attached to the truck and then 2 at the back of the trailer. The axles found underneath the trailer got four wheels per axle. There are vehicles with even more axles but they are specialized vehicles designed to haul the gigantic and long loads.

More than knowing how many axles you have in your vehicle is the importance of knowing what each axle does for your vehicle. Like other important car components they are worth learning about since having it fail on you means you will no longer be able to drive your car. And although axles are made to bear a tremendous amount of weight they could still fall into a poor condition overtime as various hazardous situations can weaken them. Being able to pinpoint which is which you will be better prepared to determine which parts need to be repaired or replaced.