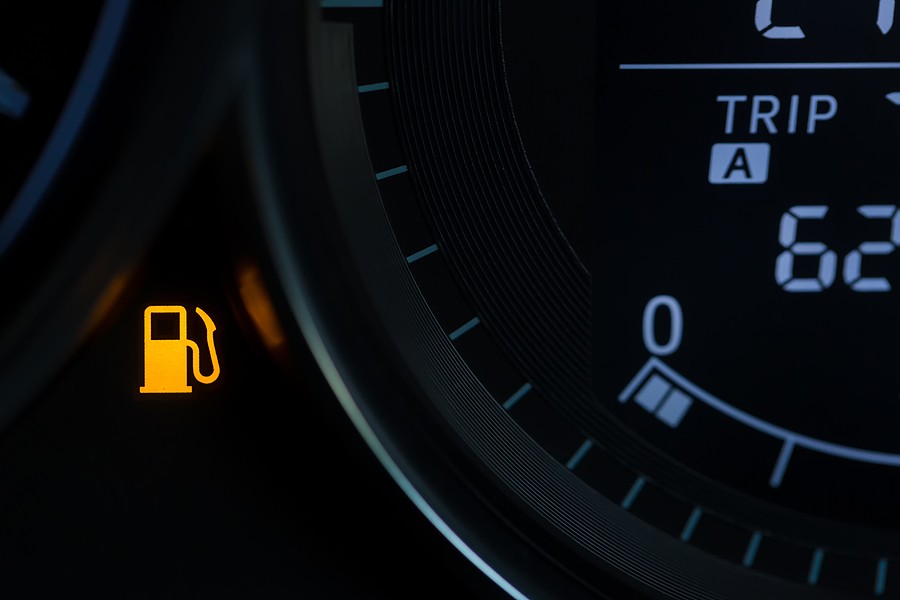 As soon as that little fuel light comes on, how long can a car run on empty? The answer is, it depends. Occasionally driver's would let the gas tank get low enough to set off the low fuel warning light. Although we all know it's best to keep your gas tank at least a quarter full, sometimes the inevitable happens. But knowing the estimate and the factors of how far you can travel on an empty tank of gas can help you avoid being stranded on the side of the road.

Many motorists have been left stranded and perplexed at the side of the road because they either forgot to gas up or are playing the game of “how far can I go before I have to fill up my tank?”

A popular misconception is that a car can drive for 40-50 miles after the fuel light turns on, but proving this is difficult. So, can you trust the fuel gauge on your dashboard? In this post, we'll show you how far you can drive after the fuel light has been lit, the dangers of running on an empty fuel tank,  and what you can do to boost your gas mileage.

The definite answer on how long can a car run on empty gas tank is determined by the road conditions, your driving habits and whether you are driving on a long empty winding road or stuck in a traffic jam in the city. When stuck in traffic and your vehicle has estimated range on the fuel gauge based on average miles driven then the fuel gauge might not be very reliable.

Also while most drivers believe the average range is 50 miles, the truth is that it varies greatly depending on the make and model. So don't depend on the 50-miles estimate, and instead of driving around with the low-fuel light on, consider it a final warning.

The gas light on various vehicles is designed differently, but most cars fuel light illuminate  when there are around 2 to 3 gallons (7.5 to 11 liters) left in the tank. It's different for some larger vehicles.  When there are about 4 gallons (15 liters), or about 1/16th of a tank, left in some trucks and SUVs, the fuel empty indicator already illuminates.

For the top 50 best-selling vehicles in the United States in 2015, here is the range of how many miles you can travel – as well as the point at which the alarm light illuminates according to YourMechanic:

Many modern cars have an estimate of how many miles you can travel before running out of gas. Bear in mind, though, that these mileage forecasts are just estimates. Sitting in traffic, traveling at high speeds, or ascending a steep hill may all have a significant effect on these figures. If your vehicle model is not mentioned above, consult your owner’s manual.

How Long Can a Car Run on Empty: Dangers of Driving With An Empty Tank

According to experts, you can still keep your gas tank at least a quarter full. Obviously, keeping a little gas in your tank will prevent you from getting into a precarious situation where you're low on gas and too far from a gas station to fuel up, but there are other, less apparent reasons you have to worry about besides how long can a car run on empty gas tank.

Driving on a nearly empty tank, or even one that's getting close to the bottom, can result in these other very compromising situations:

This could happen because any small particles that make their way into the gas tank settle at the bottom and tend to remain there until your car is frantically trying to scavenge the last drop of fuel. Any debris in your tank will be sucked up by the fuel pump as it sucks up the last of your fuel, and the particles will get trapped in your fuel pump or fuel filter.

The gas tanks in older cars (from the 1980s and earlier) are normally made of metal, and as they corrode, harmful deposits may form in the bottom. But it’s also not looking so good for newer cars that have plastic fuel tanks — because sediment from polluted fuel normally finds its way inside.

However, having annoying sediments trapped in your fuel pump isn't the only way you can damage it. In certain vehicles, the fuel pump is housed in the gas tank, and as the gas flows around the pump, it serves as insulation and lubricant.  But  if you run your gas tank dry on a regular basis, the fuel pump will overheat, causing it to wear out prematurely.

Some newer cars have an instrument cluster monitor that keeps track of your range, or how far you can travel on your current tank of gas. Again although these graphs are fairly reliable, they are only estimates. The accuracy of this gauge can be affected by changing road conditions or a variety of other factors, leaving you stranded if you're really cutting it tight.

The engine management system in diesel cars shuts down before the car runs out of fuel, preventing damage to the vehicle. However, there is no such program in place for gasoline vehicles.

When your car is running on empty, the fuel pump can begin to take in air, indicating that the engine isn't getting the gas it needs on a consistent basis. Engine misfires are common as a result of this. This would most definitely feel like a lack of control, hesitation, or sensation to you. It's bad for your engine, and it could lead to bigger problems down the road.

It should be easier to break the habit now that you realize driving on empty is bad for your car. You should prevent such things from happening by not worrying about how long can a car run on empty tank, but by worrying how to prevent these situations. You might not damage your car immediately when you're running low on gas for the first or second time. Just don’t make driving on a nearly empty tank a habit. You'll be fine if you make it a habit to top up once your fuel gauge hits the quarter mark.

How Long Can a Car Run on Empty: What to Do if You Got Caught Up with an Empty Fuel Tank

When your car eventually runs out of fuel, it will be clear. Engine misfires can cause some brief hesitation, which is your first warning sign. When this occurs your engine will be shutting down shortly and the vehicle will lose control. So if driving to the next gas station is just not possible here’s what you should do:

If you’re wondering how long can a car run on empty fuel tank, you might also be wondering how much gasoline will it take to start a vehicle after it runs out of gas. The answer is that it just takes around a gallon of gas to restart your engine. However, regardless of how much gas you put in the tank, make sure it's enough to get you to the nearest gas station if you have decided to temporarily refill your gas tank just to get to the fuel station. .

Driving on an empty fuel tank can sometimes be inevitable, so you must really question how long can a car run on empty fuel tank. Knowing how many miles of range you have left is critical in that case. It's a good idea to figure this out ahead of time so you'll be ready when the tank gets really low to prevent a breakdown. If you notice that you're running out of fuel much faster than anticipated make sure to have your vehicle inspected to rule out fuel leak.