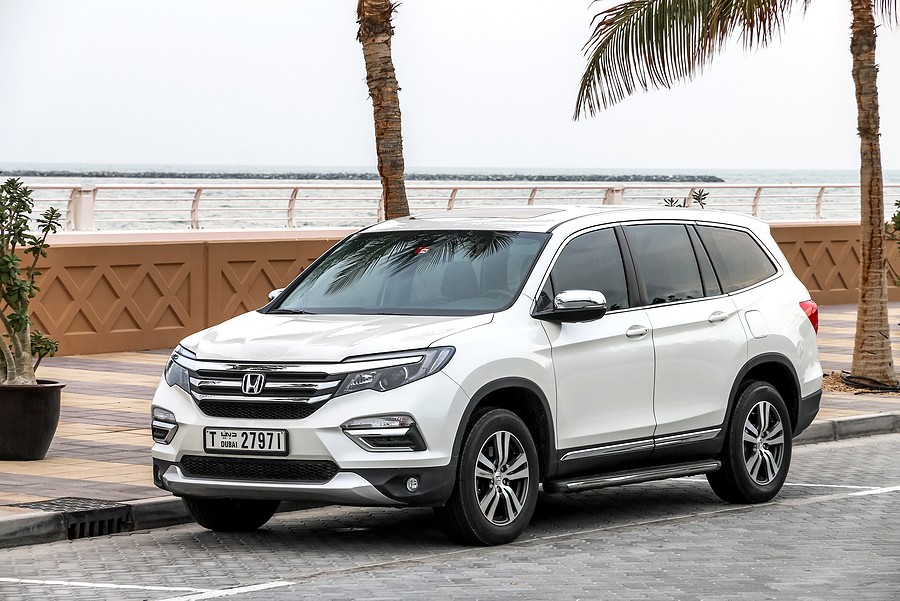 The Honda Pilot is a mid-size SUV that is manufactured and produced by Honda, a Japanese multinational corporation that is known for its automobile production. Designed for selling in the North American market, the pilot is the largest model produced by Honda and features three-row seating.

Currently sharing a platform with the Acura MDX, a mid-size three-row crossover produced by Honda, the Pilot also shares similarities with the Odyssey minivan. The construction and the independent suspension are designed to provide similar handling and towing qualities.

The third generation was produced from 2015 and is still being produced today, with changes occurring in 2017 and undergoing a facelift in 2019.

Unfortunately for Honda, the first year of the Pilot production is also the worst. With the most complaints from the NHTSA and the highest number of user issues, this 2003 model year is definitely not one to buy from a used car salesman. The top areas of concern for users are the interior accessories and the transmission, while the NHTSA lodged the most concerns regarding the electrical system and the drivetrain.

The interior accessories concerns focus on the ignition switch problem, the chrome paint chipping from door handles, the door locks not working properly, the door lock actuators failing, the seat adjustment not working, the dashboard rattling, the electrical ports being broken, the gear shift sticking, the glove box lock falling out, the key stuck in the ignition, the middle sta not being able to recline, ad the radio burning during use.

To fix the most prevalent ignition switch issue, the typical repair cost is around $510 and occurs at around 125,000 miles, with the most common solutions being to replace the ignition switch.

The NJHSA concerns regarding the electrical system deal with the ignition not being able to turn, the ignition switch, the wiring under the dash, the battery, the fuses and circuit breakers, and the electrical wiring, with these issues causing 2 crashes, 4 fires, 1 injury, and occurring at an average mileage of 109,000 miles.

After the disastrous first year, the next model year got much better in terms of less user complaints and NHTSA issues. However, the interior accessories still remained a key concern for users, while the NHTSA lodged the most complaints for the drivetrain.

The user complaints about the interior accessories focus on the key not being able to go into the ignition, the door handle chrome film peeling off, the seat support bracket failing, the driver’s seat overheating, the plastic panel snapping off, and the seat control breaking. To fix the same ignition issue as the previous model year, the average repair cost is just below $00 and occurs at around 114,000 miles.

The NHTSA lodged the most complaints regarding the drivetrain and powertrain, with users stating that the car makes a grinding sound during use, the RPM’s fall while driving, the car was not able to shift gears, and the car shudders during acceleration.

After a year of fewer complaints, the 205 unfortunately went back to other bad graces of the users and potential owners. Many owners reported that their vehicles were slamming on the brakes suddenly when they did not engage the braking system. The most user complaints focused on the transmission, while the NHTSA lodged over 200 complaints regarding the braking problems, eventually leading to a recall in March of 2013.

For the next three model years, we saw the problems slowly and surely decline, with 2008 having very little issues. The main area of concern in 2006 is the windows for users, with this model being a trouble-free model year without any major problems, except for the trend of window regulator failure. Users state that the window regulator can fail and the wind noise can come through the windows, with the typical repair cost coming out to $320 to have the regulator replaced.

In the 2007 year, this model is also a solid choice that is basically trouble-free without any major issues, with the windows causing the only cause for concern, regarding the power window failure, coming out to an average repair of $370 and occurring at just below 100,000 miles.

The 2008 follows suit, with very few problems for this year of the Pilot, with the main concerns focusing on the engine. Users reported that oil can leak into coolant and there is excessive oil consumption, with the typical repair cost coming out to a very expensive $4,350 to replace the engine at around 66,000 miles.

The years following the three years of very few problems without any major issues saw a slight rise during the 2009-2011 model years, with all three years having relatively similar numbers of user complaints. The 2009 year had the most concerns regarding the engine, with owners stating that there was excessive oil consumption, engine failure, the engine not being able to start, and the engine misfiring.

The 2011 model year also had the most complaints for the engine, but slightly declined from the previous years. This car earned a seal of “pretty good” from car complaints, and has fewer reports of excessive oil consumption, but still has some concerns regarding the engine misfiring, piston ring failure, the car shuddering during acceleration, and unintended acceleration.

The 2013 Honda pilot is one of the last years that has any major concerns for the car, with the 2012 declining in complaints, and the 2014-2015 model year having very few issues. The main categories of concern regarding the 2013 Pilot are the body and paint for users, and the engine for the NHTSA.

Owners stated that the paint can chip on the car, the paint is peeling, the rear hatch hinge can buckle out, and the wrong paint color was provided for touch ups to do on your own. Although these problems are relatively minor and just cosmetic, the repair cost for the paint chipping is around $830 and has a most common solution of repainting the entire roof.

The 2016 Pilot is the last year where there were major concerns – and there were a lot. The top category for this year’s problems are transmission problems, with owners having multiple reports of jerking while accelerating. Since this is the first model year of the redesigned 3rd generation, this is not promising for new car owners.

The electrical category of the 2016 Honda pilot features the most NHTSA complaints, with the organization lodging over 200 issues that have caused 2 fires and occur at an average of 39,000 miles. Users stated that the keyless start system problem occurs, the vehicle can shut down after moving from park to reverse, the car shifted into neutral without meaning to, and the engine has a rough idle.

The top Honda PIlot problems regardless of the model year mainly focus on the years between 2003-2009. The #3 issue with the Pilot focuses on the 2005 Pilot, with the transmission fluid leaking, costing around $2,100 and happening at an average mileage of 121,000 miles. The #2 issue with the Honda Pilot as a whole deals with the 2009 year, with excessive oil consumption occurring at around 95,000 miles and costing around $3,300. The last problem that is the most severe on the Honda Pilot is for the 2003 option, which occurs at around 123,000 miles and averages around $3,400 to fix.

There have been a total of 42 recalls for the Honda Pilot throughout all model years. One of the most severe recalls was in 2014 regarding the air bags. This recall affected the model years of 2003-205 and resulted in the deployment of the passenger side frontal airbag, internal pressure can become excessive and cause the inflator to rupture. If the inflator ruptures, this can cause the metal fragments inside to strike the vehicle occupants and result in serious injury or death.

A similar recall occurred in 2013, with the airbags being of high concern for the 2009-2013 model years. One or more rivets that attach to the airbag module to the airbag cover could be missing, meaning that this could alter the performance and the deployment of the airbag and increase the risk of injury during a crash.

In 2016, the air bag problems continued. Honda recall certain model years of a variety of their cars, like the 2003-2008 Pilot, since the cars have inflators that could rupture due to propellant degradation occurring after long-term exposure to high humidity and temperature cycling. In this case, the inflator rupture could cause metal fragments to strike the occupants and result in serious injury or death.

One year later, the problems do not seem to get any better. This is a real concern for those who are worried about the safety of the Honda Pilot cars, and show the Honda Pilot problems are barely improving. In the affected cars, these vehicles are equipped with certain airbag inflators that are assembled using original equipment or replacement equipment. In the event of a crash where the airbag is necessary, these inflators could rupture due to high humidity and temperature cycling, causing the metal fragments to hit the occupants.

The 2020 Honda Pilot has earned a US News Scorecard safety rating of 9.4 out of 10, which provides ample confidence for potential owners. The IIHS Safety Ratings showed that the Pilot earned a score of “Good” for the categories of Moderate Overlap Front Test, Side Impact Test, Rear Crash Protection, Roof Strength Test, Small Overlap Front Driver Test, and the Headlight REsults.

The only categories that did not earn the Good rating was the Small Overlap Front Passenger Test Results which earned an “Acceptable” and a “Superior” for Front Crash Prevention Results.