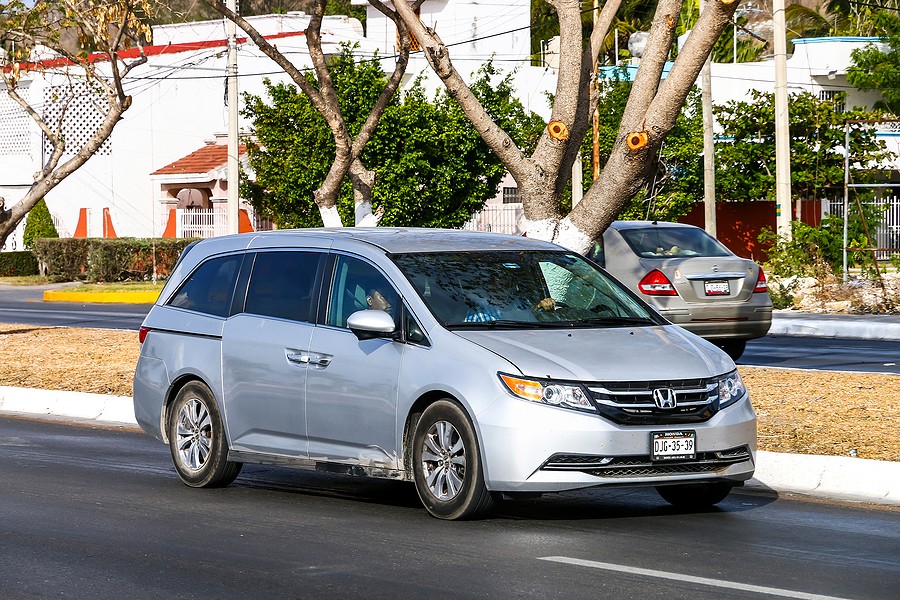 Honda introduced the Odyssey Minivan for the 1995 model year. Currently in its fifth generation it has been one of the most popular minivan models for almost its entire production run. Sales in the year 2000 topped 100,000 units in the US for the first time and they haven't dropped below that since with the exception of 2019 when 99,000 sold. Over its life the Honda Odyssey has won Car and Drivers ‘five best trucks’ more than once as well as Consumer Reports top five picks for minivans several occasions.

A Honda Odyssey is generally a reliable vehicle, with the exception of some of the mid-2000s models. 2005 especially had a number of problems relating to steering and body issues like sliding doors and paint jobs. The 2006 Honda Odyssey and the 2007 Honda Odyssey had much the same and should probably be avoided if you're in the market for an older model. That said, the Honda Odyssey has also had some issues with its timing belt over the years.

If you've ever had a problem with the timing belt in your vehicle, you know it can lead to some seriously costly problems, including engine repairs that can cost into the thousands of dollars. For such a simple thing, it does cause a lot of problems and it's something that you don't want to let slide for too long if it's giving you an issue. Let's take a look at what a timing belt even does, and some of the issues Honda Odyssey has had with theirs.

Your vehicle has either a timing belt or a timing chain inside of it. These terms are often used interchangeably but they're not exactly the same thing. Timing chains are made of metal, while timing belts are rubber. Older cars used to exclusively have timing chains, but during the 1970s belts became the norm. It was part of a cost-cutting measure through the production of vehicles as a reason oil prices and other concerns that made manufacturers want to reduce the cost of making vehicles overall.

Timing chains are generally stronger than timing belts, as you would guess, and they last longer as well. Chains are making a comeback in some newer automobiles, but many still make use of timing belts because they do reduce cost. Unfortunately, because they are rubber, they tend to fall apart more frequently than timing chains do. The result is that you'll need to have them repaired more often. One of the most common problems with a timing belt is that the rubber teeth on it can fall off and get stuck in the gears, potentially causing a catastrophic failure for your entire engine.

Whether your vehicle uses a timing chain, or a timing belt purpose is the same. They synchronize the motion of the crankshaft and the camshaft. This allows for the precision movement in the valves and pistons of your vehicle so that your engine fires at the exact precise time. If the timing belt is off, your engine can suffer serious misfires. If it slips completely or breaks, you risk having pistons hitting at the wrong time and causing serious damage to the engine. It could lead to a blown gasket head or serious warping of the metal components.

A rubber timing belt should be able to last you about 60,000 to 130,000 miles, depending on how hard you push your car. After that time even normal wear and tear is going to cause the rubber to degrade, so you really should get a mechanic to check it out just to ensure that you don't need a new one. It's only made of rubber, so it can't last forever.

A number of drivers have expressed frustration with the fact that the Honda timing belt will only last 100,000 miles and then almost definitely needs to be switched out because it will be if not broken at that point, very close to it. Because the Odyssey has an interference engine, if your turning belt does break, you risk serious damage to the valves and other parts of your engine.

Even though a timing belt seems like it should be a fairly simple thing to remove, getting into where it's located does take some time and effort. This is generally not the sort of repair that you can do at home unless you're extremely comfortable working under the hood of your car. That means you're going to be taking it to a mechanic and pay not just the material cost but the labour cost. And this job will take a while. So how much does a timing belt replacement cost?

For a Honda Odyssey, you are probably going to spend between $650 and $800 to get your timing belt replaced.  In some cases, it may cost up to $1,000. Even the cost of the tiny mouth itself can vary greatly. If you had to AutoZone you could see that the cost for buying a new timing belt for 2018 Honda Odyssey can range from $36 to $204. Depending on the year of your vehicle, you could be looking at quite an investment.

Another thing to consider is that the timing belt and the water pump are almost always replaced at the same time, since they have about the same lifespan in the water pump is located right next to the timing belt. That will increase the overall cost, but it is generally something you should consider doing since if it needs to be replaced a mechanic is going to have to get back into the same area and charge you the same labor costs again.

Of course, this is just a general rule of thumb, as with any repair job what one mechanic charges you on one side of town may be vastly different from what a mechanic on the other side of town charges as well. Your best bet is to call around and get a few estimates and check some online reviews or with friends and family to determine who's going to give you the best service at the best price.

In 2019 Honda issued a recall that affected over 100,000 models due to a problem with their timing belts. According to the recall the teeth of the timing belt could separate from the belt entirely and cause engine stalls. Along with the Odyssey, Ridgeline and Pilots were recalled by Honda as well as several Acura models. The manufacturer stated that the teeth were separating because they weren't hardened properly during manufacturing as a result of a faulty mold. Though there were no injuries or crashes related to the issue, there were a number of expensive repairs that had to be undertaken by some drivers, which is what prompted the recall.

The 2002 Honda Odyssey was plagued with numerous problems. 10 recalls were issued for this model year and while most of the problems drivers had with the 2002 model related to transmission, and by that we mean hundreds of people complained about transmission issues specifically full of transmission failure, the timing belt was also enough of a problem that Honda issued a recall for it.

According to this recall, certain minivans of which the Odyssey was included, equipped with a V6 engine, a timing belt tensioner pulley on the water pump was misaligned. That caused the timing belt to make contact with a bolt on the cylinder head. That led to the belts wearing down much faster than it should have and breaking or failing completely.

Even if your vehicle doesn't follow under one of the recalls, as we said these belts generally only last about 100,000 miles. At some point you're going to have to have your timing belt replaced no matter what. With that in mind, here are a few signs you can look out for to let you know that it's time to get your timing belt checked before a situation goes from bad to worse and ends up costing you a few thousand dollars for engine repairs.

Ticking Noise Coming from the Engine:  This is one of the easier symptoms to notice right away, because you'll hear it when you're driving your car. The timing belt is covered in rubber teeth as they wear down or break off, it causes the belts to run unevenly between the camshaft and the crankshaft. As it spins, a noticeable, fast-paced ticking sound is produced. It sounds something like a fast-paced roulette wheel spinning and should be distinct from most of the other engine noise that you're used to. If you hear the sound of your engine belt ticking, it's a good sign that you need to get your car to a mechanic really quickly before the belt breaks entirely.

Engine Misfires:  The number of issues can lead to engine misfires, so this is just a general rule of thumb and something worth checking out if you're noticing them happening. But definitely a poor timing belt can lead to misfires. Misfires happen when your cylinders are opening and closing at the wrong time to prevent the proper fuel oxygen mixture from achieving combustion in the engine. Because the timing belt is responsible for opening and closing the cylinders at the exact right time, when it malfunctions you get misfires. If this happens frequently enough, it can cause serious damage to your engine and will also greatly reduce your fuel efficiency.

Rough Idling:  Like engine misfires, rough idling can be a symptom of a number of issues with your vehicle. However, a bad timing belt can definitely lead to this problem. If the teeth come loose or come off and fall into the gears that can cause the car to vibrate and shake for no discernible reason, even when you're just sitting with the engine running and not putting it under any stress. Broken teeth from your timing belt can lead to costly repairs, so they should really be checked out as soon as possible.

Low Oil Pressure:  The teeth falling off of your timing belt can lead to low oil pressure because they can potentially fall into the oil pan below your engine. That clogs up the pan and prevents the oil from circulating properly to lubricate and cool down the engine. This leads to decreased oil pressure, which also can lead to that ticking sound we mentioned earlier.

Engine Won't Turn Over:  If your timing belt has completely slipped off the gears, or is broken entirely, then your engine will not be able to start at all. You'll be able to hear the starter motor engage and attempt to get the motor running, but without a timing belt to synchronize the camshaft and the crankshaft, the engine will be completely unable to get started. At this point you're going to need to get towed into a mechanic to have it repaired.

There have been a couple of bad years for the Honda Odyssey in terms of timing belts, and you should definitely avoid the 2002 Honda Odyssey not just for this problem but for a host of others that have caused it to be probably the worst model year for the Honda Odyssey’s entire lifespan. Because of the recall for the 2019 Honda Odyssey, you may be a little leery about looking into this mall a year as well. At the very least, if you find a 2019 at a good price, make sure you get a trusted mechanic to check it out and make sure it's reliable.

The Honda Odyssey has been plagued with a variety of issues over the years, but the timing belt is rarely one of the main problems. Still, if you're looking at an older model of Honda Odyssey, check the mileage before you commit to anything. As we said, the Honda Odyssey's timing belt rarely lasts beyond 100,000 miles. If it hasn't been repaired and it's close to that point, that's going to be a repair that's on the horizon.