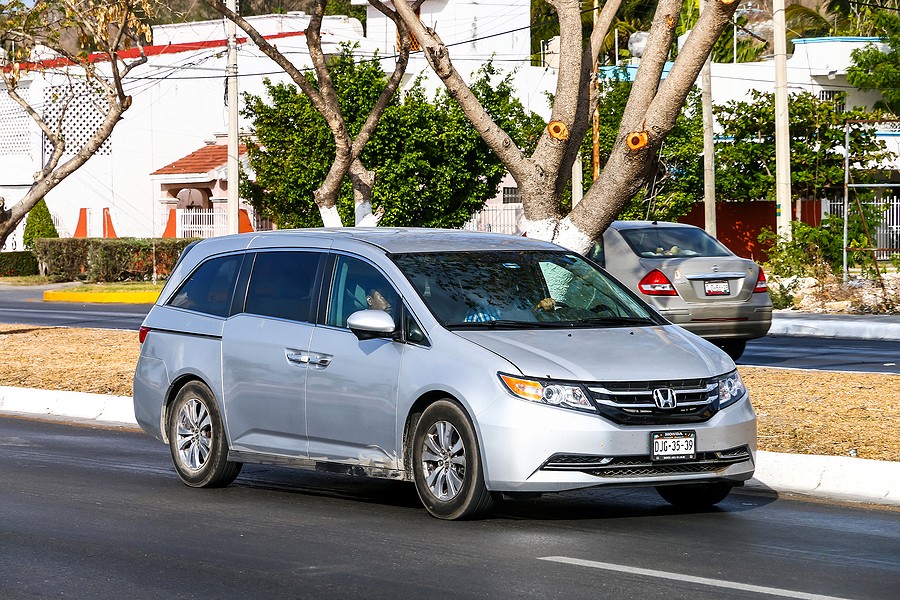 Most common Honda Odyssey problems are related to the torque converter, which results in loud clanking noise. Some reported problems for older generations were associated with whining power steering and issues with brakes Fluid leaks.

Honda Odyssey is a great choice for people who are interested in minivans. While the vehicle is great, it does have technical issues that you need to be aware of.

If you're looking to purchase a use Honda Odyssey, automotive experts suggest that you perform a pre-purchase inspection and have your mechanic look at the vehicle and confirm that there are no major issues.

The purpose of this article is to highlight the main problems associated with most Honda Odyssey model years. We're hoping out of this article you can make an informed decision about which model year to buy and which years to avoid.

The article serves as a great resource for new shoppers and can support current Honda Odyssey owners. If you are a current owner of this vehicle, you might need to familiarize yourself with the expected problems that this vehicle will have and at what mileage to be prepared or decide when it's the right time to get rid of this vehicle.

What are the most common Honda Odyssey problems?

Since Honda Odyssey redesigned their current generation, there is no data related to customers' complaints as the previous generations.

Let's take a look at the most commonly reported complaints about Honda Odyssey problems by generation:

Honda Odyssey received multiple complaints from several customers related to cranking issues and hesitation in the gear change. It also received complaints related to vibration problems whenever customers use the brakes.

Most of this generation's problems have to do with the torque converter. As Honda mentioned, as the vehicle's converter tries to provide better fuel economy, you might hear a harsh clunking noise.

Luckily, Honda worked out this problem and came up with new software that improves and enhances the clutch engagement, so you don't hear this clunking noise.

One good solution for reducing the clunking noise would be to flush the transmission fluid based on many mechanics and dealerships. Of course, the solution might not work for every model year.

As a result of these reported problems, Honda decided to provide an extended warranty for the powertrain that has to do with the torque problems. This warranty covers the vehicles of 2011 and 2012 only. The warranty is extended up to 10 years or 100 and 5000 miles, whichever comes first.

Like the people she mentioned generation, this generation also suffered from watch issues, and Honda developed specific software to smoothen out the clutch engagement and solve the problem.

Another common problem associated with the 2005 to 2010 generation is related to power steering. Many customers complained of hearing some whining noises coming from the steering, especially at lower speeds, affecting the brakes' performance.

According to Honda, the problem is most likely related to the steering pump, and therefore, they decided to extend their warranty coverage for these vehicles.

Interestingly, Honda recalled multiple vehicles from the 2005 to 2008 model years due to the brakes' problems. Most of these recalls were related to fluid leak issues or some problem with the air bubble making its way to the brake system.

Another big reported complaint about this generation's problems was associated with the engine misfiring due to problems with the piston rings. As a result, Honda decided to provide an additional extended warranty for vehicles affected between the 2008 and 2013 model years. This extended warranty covers about eight years or unlimited mileage.

What's your Honda Odyssey to avoid?

For example, most reported complaints about the 2002 Honda Odyssey vehicle were related to significant transmission issues, according to carcomplaints.com.

A significant portion of these reported problems about the transmission has to do with total and complete transmission failure that occurred mostly around 97,000 miles. Unfortunately, most customers had to sell the vehicle as they gave up on them or repair it by installing a used or brand new transmission for an average price of $3430.

Let's take a look at what some of the reported complaints look like:

The first owner was extremely disappointed with his Honda Odyssey 2002. He mentioned that he had to deal with complete transmission failure as he was driving on the highway, and Luckily, there were no accidents.

Although the owner came from a Honda-loving family, he decided that it might not be the case in the future after his experience with a 2002 Honda Odyssey.

According to this owner, he had never experienced any problem with his previous Honda Civic and his mother's Honda Accord vehicle. Thus, while this might be disappointed about the 2002 Honda Odyssey, it might not necessarily be the case for every Honda vehicle.

The second owner enjoyed her Honda Odyssey and driving on the highway until she realized that smoke and fire is coming out of her vehicle.

As she stopped the vehicle and pulled over on the highway, the highway worker helps her to turn off the fire and mentioned that the transmission was blown on the car.

She got extremely disappointed and reached out to Honda to see whether they can help her repair the transmission issues. Unfortunately, Honda was not able to help her because the vehicle was already above 150,000 miles.

Unfortunately, the driver could not fix the vehicle and had to get rid of it.

The third owner had significant problems with his 2002 Honda Odyssey. He indicated that these problems started to occur immediately after changing the transmission fluid.

He found it very hard to believe that this simple maintenance caused significant problems in the transmission.

Transmission started making loud noises, and it was sleeping very badly. In some situations, the transmission refused to move and made driving extremely hard.

According to this owner, he could not afford to install and a new transmission that will cost more than the value of the vehicle. Thus, he doesn't recommend purchasing a 2002 Honda Odyssey if you don't like to deal with significant transition problems.

What year did Honda Odyssey have transmission problems?

How many miles can a Honda Odyssey last?

According to automotive experts and several Honda Odyssey owners, an average vehicle from this make can last up to 300,000 miles. Of course, to reach out this far with your vehicle without significant problems, you need to perform regular maintenance and ensure that you've been taking good care of this vehicle.

The number is not fixed in stone, and it differs significantly by the environment you are driving in and your driving style, along with the type of fuel you're using like any other vehicle.

Again if you were planning to purchase a used Honda Odyssey, a good place to start with is listening from real customers who had previous experiences with their Honda Odyssey.

One of the best locations to look for customers reviews is Reddit, which most of us reach out to for any other general problems.

Another great resource to start with is also carcomplaints.com. On this website, you'll be able to take a detailed look at each problem with the Honda Odyssey by model year. You can check customers' reviews, and they are Expected repairs and repair costs. The nice thing about this website is that you'll see a ranking associated with each problem indicating whether you're dealing with a significant problem related to the Honda Odyssey or not.

Honda Odyssey had several recalls associated with different model years. The most notable recall was related to 2002 through the 2004 models affected by issues with the airbags. These vehicles require immediate replacement of the airbags due to safety problems resulting in exploding.

Is it worth repairing my Honda Odyssey transmission problems?

Well, answering this question depends heavily on your circumstances.

For example, if your Honda Odyssey has a lot of mileage and it got to a level where significant problems are expected to come soon, it might not be worth fixing this vehicle.

Another rule of thumb is to check the total repair costs. If you notice that repair costs are getting up to 75% or more from your vehicle's value, you don't want to fix this car, and you'd better sell it and buy a better one.

Finally, if you noticed that there is no hope in getting a certain problem repaired and you know for sure that the problem might be related to design issue, you’d better eliminate this headache and purchase a better vehicle.

What if it's not worth repairing my Honda Odyssey transition problems? Do we have any other options?

If you got to a level where it's not worth repairing the Honda Odyssey, it might be the time now to sell it and get about our vehicle.

Luckily, even if you have significant problems with your Honda Odyssey not even related to the transmission only but also some major issues in which engine, you can always reach out to Cash Cars Buyer and sell it.

The great thing about Cash Cars Buyer is that we guarantee to while your Honda Odyssey is in good condition or is completely damaged in a flood or an accident.

We also provide free towing for all customers despite their living location around the United States.

Our offers are fair and consider multiple factors, including your vehicle's condition and the scrap metal price in your area.

Our process is very straightforward and involves the following three simple steps:

Another great thing about our companies that they will never change your office. We need to heal, and whatever we provide you at the beginning of the process represents the cash you receive at the pickup time. Thus, we never take advantage of you like any other competitor.

To get started with our process, we invite you to reach out to our customer service at 866-924-4608 or visit our home page and click on the free instant online offer. Our process is explained in detail in this link.