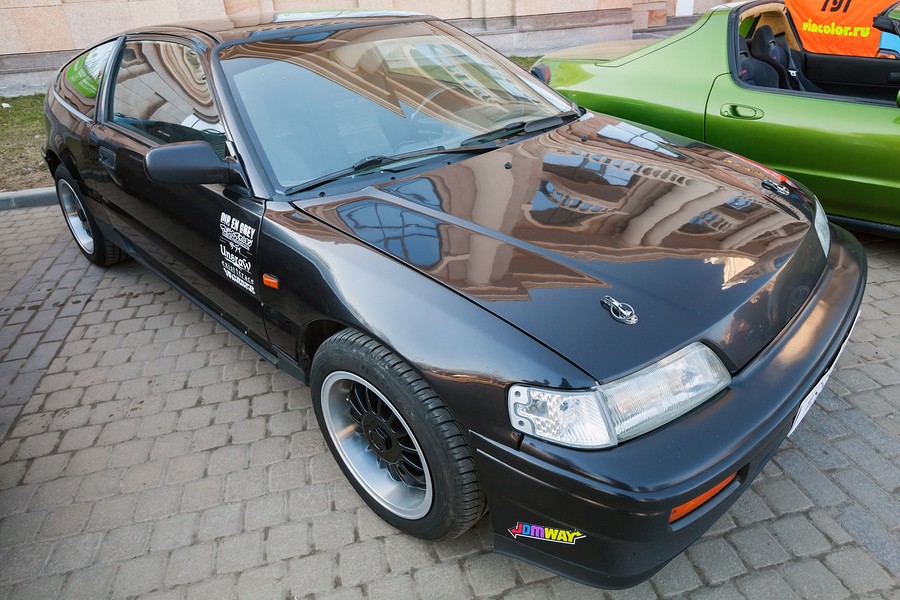 Honda sold its first car in the U.S. more than 50 years ago. It was a Honda N600. The N600 only stuck around in the U.S. for a few years, but it opened up the proverbial floodgates for Honda in the U.S. and helped them launch more successful vehicles like the Honda Civic and the Honda Accord in due time. It also cleared the way for cars like the Honda CRX, which was eventually released a little more than a decade after the N600 first made waves in the U.S. The Honda CRX was one of the most popular cars produced by Honda during its initial foray into the North American market.

Unfortunately, the Honda CRX didn’t stick around for very long in the grand scheme of things. It didn’t make as big of a splash as the Civic and Accord did, which is why it didn’t enjoy the same kind of longevity as those two cars. But for a brief period of time, the Honda CRX did mesmerize many American drivers while making its mark on the automotive world. Learn all about the Honda CRX and its contributions to the car community below.

When Was the Honda CRX First Released?

Shortly after releasing the Honda Ballade in 1980, Honda decided to rework some elements of the car and bring it to the U.S. They created the Honda CRX specifically for the North American market and released it for the first time in 1983 as the 1984 Honda CRX. There has been a lot of debate over the years as far as what the “CRX” stands for with “Civic Renaissance Experimental” being one of the most widely accepted definitions for the CRX acronym.

What Kind of Car Was the Honda CRX?

Just like a lot of the other vehicles that Honda was producing at the time, the original Honda CRX was a compact car. More specifically, it was marketed as a “Kammback,” which is a term that refers to a car with a rear that slopes downwards and that has a flat vertical surface on the back of it. The Honda CRX had just three doors, and it was on the smaller side on the interior with a 2+2 seating arrangement that featured just enough room for a driver and a passenger in the front and kids or the occasional adult passengers in the back. This allowed for Honda to use a very tight and compact design when putting the CRX together.

What Made the Honda CRX So Popular?

The original Honda CRX was released at a time when the 1973 oil crisis was still fresh on a lot of people’s minds. The oil crisis had caused a gas shortage throughout many parts of the U.S., and it had forced people to rethink the fuel efficiency of their vehicles for the first time. The Honda CRX—and a lot of other compact cars like it—offered a fuel efficiency that people just couldn’t find in many larger vehicles. Honda claimed the CRX could get anywhere from 50 to 70 miles per gallon depending on the driving conditions. That is one of the reasons why about 50,000 people bought the 1984 Honda CRX. It’s also why sales skyrocketed to almost 60,000 in 1985 and then up over the 65,000 mark in 1986 before coming back down to earth a little bit in the years that followed.

But the fuel efficiency of the Honda CRX isn’t the only reason why many Americans fell in love with the car. They also loved the performance that it offered thanks to the aluminum 1.3-liter CVCC engines (economy model) and aluminum 1.5-liter, four-cylinder engines (sport model) tucked inside of it, and they appreciated the incredible handling that it provided as well. It was clear that Honda had a huge hit on its hands almost from the beginning.

How Did the Honda CRX Change Over the Years?

Although it was pretty obvious that Honda had come up with a winning formula for success when it designed the original Honda CRX, the company continued to push the boundaries in subsequent years to improve upon the 1984 CRX. In 1985, for example, they did away with the CRX economy model and released it with an HF (high fuel) model that had a 1.5-liter engine in it that was capable of providing people with even better fuel efficiency. They also released an “SI” model (sports/injected) that had a very powerful 1.5-liter SOHC PGM-FI engine as well as technologically-advanced features like a power sunroof, remote exterior mirrors, and more.

Honda also incorporated a variety of other changes into the Honda CRX over time. Some of the most notable changes included:

But it’s worth noting that Honda didn’t tinker with the CRX too much throughout the years. They stuck with what they had for the most part and used this consistency to their advantage. It established the Honda CRX as one of the most fuel efficient cars on the road and allowed people to gain an appreciation for what the CRX brought to the table with regards to performance.

Which Awards Did the Honda CRX Win?

It wasn’t just the general public that fell in love with the Honda CRX over and over again throughout the 1980s and early 1990s. The people who knew cars best also showed a lot of love to the Honda CRX by giving it a series of awards over the years. It all started in 1984 when Motor Trend gave its “Import Car of the Year” award to the Honda CRX. That would be just the first award of many that the Honda CRX would collect. Here are some of the other awards that it won:

The Honda CRX also made an appearance on the TV show Fight Back! With David Horowitz after Honda claimed the car could get between 50 and 60 miles per gallon fuel economy under normal driving conditions. Horowitz often used the show to refute claims made by companies. But when it came to the Honda CRX, he actually found that Honda might have been underselling the fuel efficiency of the CRX since he was able to get about 65 miles per gallon with it.

When Was the Last Year the Honda CRX Was Made?

At the height of its popularity, the Honda CRX was in such high demand that people had to be careful about where they parked their cars. In the late 1980s and early 1990s, many car thieves specifically targeted those who drove the Honda CRX. But at the start of the 1990s, sales for the Honda CRX started to slump, which eventually led to Honda going in another direction. They did away with the CRX in 1992 and replaced it with the Honda del Sol. Some people still considered the del Sol to be a CRX at heart and even referred to it as a third-generation CRX. But it slowly morphed into a much different kind of car than the CRX until it too was discontinued in 1998.

Is the Honda CRX Rare Today?

Between 1984 and 1991, there were almost 400,000 Honda CRX models sold throughout the U.S. As a result, there were quite a few CRX models out on the road throughout the 1990s and even into the 2000s. But as of today, there aren’t very many of them out on the road anymore. Since Honda stopped producing the CRX almost 30 years ago, it shouldn’t come as a huge shock to hear that the CRX has become increasingly rare.

The Honda CRX has actually become so rare that, when one shows up at a car show unexpectedly, it often steals the spotlight. Even though the CRX isn’t the biggest or flashiest car around, the fact that there are still some out there in decent shape says a lot about the car. People tend to stop and turn their heads when they see one from the 1980s that’s still ticking.

Is Honda Ever Going to Bring Back the CRX?

In recent years, there are a lot of car companies that have brought back some of their most popular cars from yesteryear. The Dodge Challenger is a good example of a car that was resurrected from the dead to much fanfare. It has led some car enthusiasts to speculate about the potential return of the Honda CRX. Some people have even gone as far as to create mockups of what a modern-day Honda CRX might look like.

But for now, it doesn’t appear as though the Honda CRX is going to make a return. While the CRX definitely enjoyed a moment, there are so many car companies creating compact cars these days that it would get lost in the shuffle. It’s why Honda is likely going to leave the CRX on the shelf for the time being and continue to spend its time improving upon the Civic, the Accord, and other tried-and-true cars that have become the bread and butter for the brand.

How Much Is a Honda CRX Worth?

Are you lucky enough to still own a Honda CRX? If it’s in decent shape, you might want to hold onto it for the time being. The nostalgia factor alone makes it worth keeping. But if it’s not in the best of shape, there isn’t much sense in keeping it around, especially if it’s just taking up space in your driveway, your garage, or your backyard. You might be able to get a nice chunk of change for it these days with some old Honda CRX models selling for anywhere from a few hundred dollars to a few thousand dollars depending on what kind of condition it’s in.

If you have a Honda CRX that you don’t want anymore, there are a few different ways that you can go about selling it. You can, of course, try to find a private buyer who is interested in purchasing it from you. There might be someone out there who can’t wait to get their hands on an old Honda CRX. You can also take your car to a dealership and try to trade it in for something new. A Honda dealership, in particular, might see the value in purchasing a Honda CRX from you.

But there is an ever better option for those who don’t want to go through the hassle of taking one of these two approaches to getting rid of an old Honda CRX. Cash Cars Buyer is open to buying your Honda CRX from you and giving you top dollar for it. Regardless of what kind of condition it might be in, we’ll extend a fair and reasonable cash offer to you and help you sell it in no time. Contact us today to find out how easy we can make it for you to sell a Honda CRX or any other type of car that you might own.