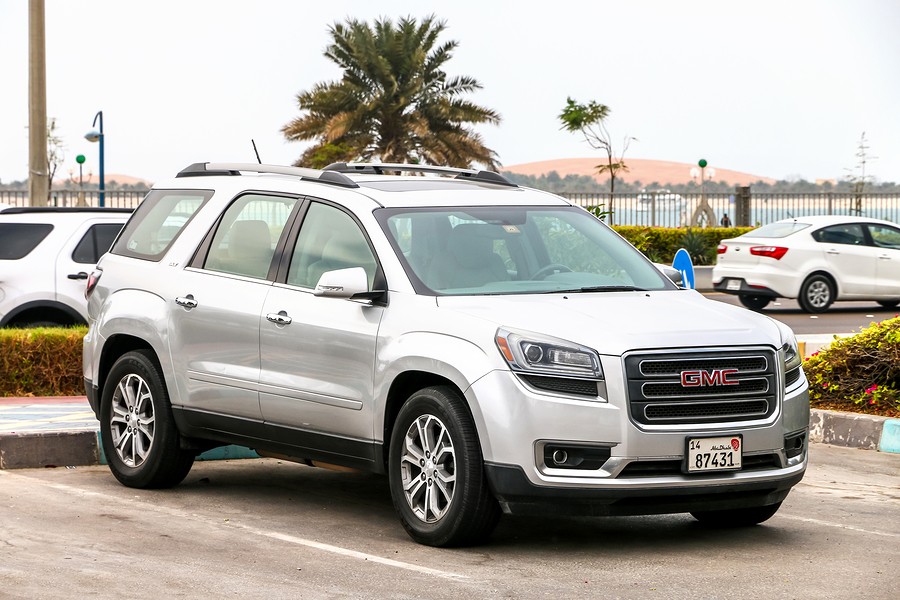 Anyone who’s gone shopping for an SUV in the past decade has probably seen the GMC Acadia and given it some thought, but they've likely also become aware of some GMC Acadia problems. Though this midsize crossover SUV has been one of the most popular vehicles in its class since its introduction in 2007, the fact remains it has not been without some serious issues that not all consumers are initially aware of. It’s good to be informed of all the pros and cons of any vehicle, so here’s what you need to know about some of the major GMC Acadia problems.

Does the GMC Acadia have engine problems?

Engine problems have long plagued the GMC Acadia. Even in its first production year, blown engines would crop up more than any driver would like to hear, causing power loss and fried cylinders. Leaks in the timing chain cover were also more common than they should have been. The 2008 model year suffered similar issues with drivers reporting the Acadia would just shut down unexpectedly even while driving which is a huge safety concern. To get this issue fixed in a 2011 GMC Acadia model with around 71,000 miles was costing drivers over $7,000 on average. That’s clearly more than anyone wants to pay but it’s also unavoidable for an issue of this magnitude. It either must be fixed or you need an entirely new vehicle, both of which are very costly solutions.

By the 2012 model year these complaints seem to have mostly been resolved so the engine problems were not any more of an issue with the GMC Acadia at this time than they were for any other similar vehicle. The newest models of the GMC Acadia have redesigned engines and the flaws of the older generation are all but nonexistent. Still, the reputation of engine issues has plagued the GMC Acadia for over a decade now which may put some drivers off. The best thing you can do if engine issues are a concern is to avoid the years with known issues and focus on newer models that never had any such concerns.

Does the GMC Acadia have transmission problems?

From its inception, the transmission in the GMC Acadia has been a weak point for the vehicle and arguably the biggest problems the GMC Acadia ever had were with faulty transmission. In 2007, the SUV’s first production year, the transmission was known to just seize up completely with very little warning and no reasonable that would then require a total replacement. This was obviously not just inconvenient but very costly and something you need to be aware of if you’re searching for a used GMC Acadia. You definitely need to be cautious about looking for a 2007 model. A replacement gearbox could cost up to $4000 or more, which is quite a steep repair bill. These issues continued into the next year and became so bad it was hard to find replacement parts.

Sites like CarComplaints.com detail the issues owners have had with their vehicles and hands down, the GMC Acadia’s transmission issues have been the worst for owners. You can see on this page that the 2008 year is the absolute worst for this issue with many owners coming up against the same transmission problem. In 2020, you’d be wary of any 12-year-old vehicle to begin with but add this factor in and if you’re in the market for a GMC Acadia, you’ll probably want to avoid this year specifically, just in case, along with the 2008 models as well.

Fortunately, as time went on, the transmission issues with the GMC Acadia have clearly been resolved and newer models of the vehicle rarely suffer from those, and certainly no more than the average vehicle.

What other GMC Acadia problems are there?

Many of the secondary systems and other components of the GMC Acadia have faced problems over the years depending on the model year. The air conditioning system, for instance, was an issue for some drivers in 2012 and there were problems with it blowing hot air into the cabin.

Older models had problems with stretched timing chains and oil leaks that were bad enough to require a trip to the shop to repair. There have also been smaller incidental issues like the wipers giving out under the stress of something like moving snow. The weight of the snow caused the arms to actually detach so they couldn’t clear the windshield any longer which was another serious safety concern if it happened on the road in a storm.

Power steering had been an issue in some models with the system springing leaks that could disable the vehicle and also end up being pretty costly to repair. Like the engine issues these problems were ones that could not be overlooked. Either they get repaired or the vehicle has to be replaced.

In 2017 the second generation of Acadia was introduced and while this engine has proven to be much more reliable though there were still a few issues with deactivation in the first year. The bigger concern with 2017 models was a noticeable wobble when driving at higher speeds that were quite distracting.

Several years of the GMC Acadia have been plagued with battery issues. Drivers have complained of the batteries draining prematurely and even after a jump or a trip to the shop they continue to drain out for no discernible reason. Some of these drains have been attributed to issues with the remote starter system and relays that don’t shut down properly after the vehicle is turned off but a full diagnostic is often the only way to determine the exact cause of the drain.

Have there been any GMC Acadia recalls?

GMC has issued 20 recalls for the GMC Acadia over the years. There have been a variety of reasons and not all of them were exclusive to the Acadia. For stance, an electrical system recall in 2010 related to a problem with the heated washer fluid module potentially being a fire risk. The Acadia was one of the dozens of vehicles that used the same module involved in the recall.

A major recall of over 80,000 Acadias, Enclaves, and Saturns was issued in 2008 thanks to that issue with wiper blades we mentioned that could be detached in heavy snow. Some 2008 to 2012 models were also recalled due to liftgate failures. The mechanism that would help raise and lower the liftgate could fail and, if it was up when it failed, it could have caused some serious injury to anyone loading or unloading the vehicle at the time.

In 2015, the Acadia was one of several vehicles that were recalled because the welds in the third-row seats were not made in the correct place. There was a chance that could have made accidents worse and the entire row of seating was at risk of detaching from the incorrect welds if enough force was applied.

Another serious issue with the GMC Acadia stemmed from the driveshaft. Part of the driveshaft assembling in 2017/2018 models could separate while the vehicle was in motion. That could have led to a loss of propulsion and a serious risk of accidents on the road. The same system could fail while the car was not in motion and if you were parked on an incline without the parking brake enabled, there was a chance of the vehicle rolling downhill.

Other recalls have been put out over the years for problems with seatbelts, airbags, tires, the ECM, and more. One of the more recent and serious recalls was from 2017 and 2018 models that were recalled due to a problem with the high-pressure fuel pump potentially leaking and being a fire risk. Cars.com has a full and detailed list of all recalls including model years, serious numbers and more in case you have a GMC Acadia or are looking to purchase one and want to know about potential issues for your model year.

Are there problems with the 2020 GMC Acadia?

JD Power has given the 2020 GMC Acadia an overall rating of 81 out of 100 based on the previous year’s reviews. The general consensus is that new models of the GMC Acadia, from 2017 onward, are all relatively reliable vehicles.  US News ranked the 2020 Acadia a 7.3 out of 10 pointing out it’s mostly fine but there are some issues. The first is what they call a “subpar predicted reliability” rating. They also mention that the interior looks cheap and that the cargo space is OK but less than what you’d find in other vehicles of its class.

While it’s still new in the life of the 2020 Acadia to know for sure what issues may crop up, there are a number of reports online that start in 2019 complaining of issues with the Acadia’s parking brake engaging on its own. As with any car, it would be a good idea to research this further if you’re in the market for a GMC Acadia to see if this is a major flaw or just a few isolated incidents.

While the GMC Acadia tends to have a lower starting price than similar SUVs in its class, coming in at around $29,000, it doesn’t offer many features you won’t find in those other vehicles as well, and those others may be more reliable.

Is it worth buying a GMC Acadia?

Though there are many problems with older models of the GMC Acadia it’s worth remembering that many vehicles suffer recalls over their lifespan, and some are definitely more serious than others. The early issues with the GMC Acadia mean you’d do best to avoid those models as the risk and potential cost to both personal safety and for potential repairs means it’s likely not worth it at all. That said, newer models of the Acadia have proven to be much more reliable over the long term with far fewer problems arising.

The Acadia is an affordable SUV option if that’s the style of vehicle you want but it’s not the head of its class in any regard either. If cost is your only concern, then it’s possible that a newer Acadia would be a good option for you. But the features and styling of its competitors like the Chevy Blazer or the Buick Enclave are as good or better in many regards as well, if you’re willing to pay a little more.

As you'll see in your own research, when professional sites like J.D. Power and others review the Acadia, it's very much ranked a middle of the pack SUV, showing up behind a number of competitors and ahead of a few others as well. J.D. Power, for instance, has the 2019 model ranked 9th on a list of others in its class. There are no standout features that make the Acadia a must have nor are there any current catastrophic issues that should make you want to avoid investing in one either. We can safely say the newer models are solid, average SUVs while those older models are just too risky to put a lot of money into.

If you know what you’re getting into and you like the look and overall performance of a GMC Acadia, then the problems of past models should be something you can overlook. Keep in mind, despite what we’ve said, this is still a popular model overall so getting parts and service for it is not nearly as difficult as it might be for something a little rarer, should it ever come to that. Newer modes will of course be under warranty as well should any of these older problems arise again. Older models that date from 2012 and earlier back to the Acadia’s first year will be well out of warranty and the cost of repairing those serious transmission and engine issues make them not worth buying in the first place.