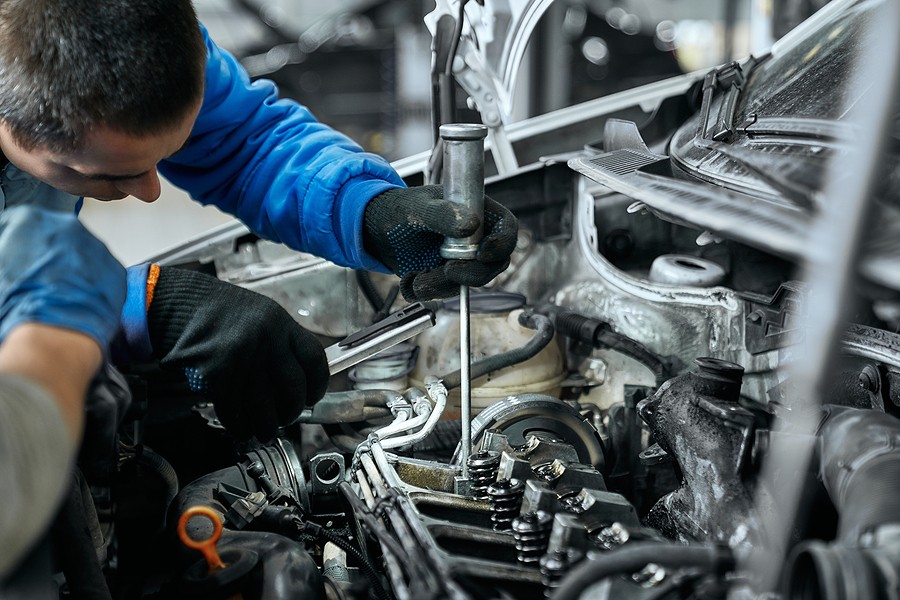 In very simple terms a glow plug is the diesel version of a spark plug, or even a tiny heater for a diesel engine. It's not exactly the same, but it is analogous. The glow plug is a heating device that will allow a diesel engine to get started more easily in cold weather. That's because diesel fuel can have problems starting in cold weather as it tends to be a little thicker than gasoline. The lower the temperature drops, the harder it is to get diesel fuel moving.

Where a spark plug in a traditional gasoline engine literally creates a spark allowing the air-fuel mixture to ignite as a result, the glow plug simply raises the temperature of the diesel and air so that when the mixture is compressed it will be able to ignite.

The way diesel engines work doesn't require a spark, which is why there is no spark plug in them. Instead the ignition process is caused by compression. The cylinder block and the cylinder head can absorb the heat of compression and prevent ignition if they're too cold. For this reason, glow plugs can be installed to warm those chambers up so that when the diesel fuel gets compressed in the chamber it's able to reach a high enough temperature to ignite and cause the combustion reaction that you need to get your engine going.

Not every diesel engine is going to require glow plugs by any means, but if you're driving a diesel engine in a cold climate, glow plugs can ensure much smoother operations on those cold days than trying to operate a vehicle without one.

How Long Does a Glow Plug Last?

Traditional spark plugs can last around 30,000 miles or so. This can change based on how you drive your car and the type of spark plug you use. Glow plugs on the other hand tend to last longer than a spark plug will. In fact, you can get a glow plug to last you for around 100,000 miles. However, because they are heating elements, they are going to wear out over time and eventually they will fail.

How Do You Know if Your Glow Plugs Need Changing?

Just as with spark plugs in a gasoline engine, glow plugs in a diesel engine can go bad eventually. There are some signs and symptoms you could be on the lookout for to let you know that you need to swap out those glow plugs for new ones. You have one glow plug for every cylinder in your engine and if even one fails it will make starting your engine difficult. If more than one fails it can be nearly impossible to actually get your engine going. With that in mind, here are some signs and symptoms to be on the lookout for.

If you're finding it difficult to get your engine started in the morning in cold conditions, then that's a good sign that you're having a problem with your glow plugs. Since their sole job is to provide the necessary heat to allow your engine to get started in the cold, it makes sense that if they're not working properly then their intended function is not going to play out for you. If you know that your battery is working okay, and you have a full tank of fuel, then the best place to look when your car won't start is at the glow plug.

If you have a glow plug that's not working properly then when you finally do get the engine going, you're going to notice that you're having issues with rough idling. That means that you're going to be producing some smoke in the exhaust and it's going to seem like your engine is struggling even though you're just sitting still in the vehicle.

White Smoke from the Exhaust

As we just mentioned, you're going to possibly witness white smoke coming out of the exhaust of your vehicle if you're having a problem with your glow plugs. This reaction occurs when your engine doesn't get hot enough to properly burn the fuel. Unburnt fuel particles end up travelling with the exhaust out of your tailpipe. This can produce white smoke and you'll also notice the smell of fuel as well. This will typically happen on start-up on a cold day, rather than continually through the operation of your vehicle.

Black Smoke from the Exhaust

It's possible you'll also notice black smoke as opposed to white smoke coming out of the exhaust of your vehicle if there’s a problem with your glow plug. Usually this is the result of the fuel to air ratio being off in your engine. In this case it means that it's too rich which is caused by an excess of fuel and not enough air. If your glow plugs aren't working properly then the combustion process is of course going to be thrown off and you may end up burning fuel in the wrong ratio which causes smoke.

Just like when a spark plug doesn't work in a gasoline engine, if one of the combustion chambers in your diesel engine isn't able to produce that combustion reaction you're going to get a misfire. Fuel has to be injected into the chamber of a diesel engine at the exact right moment so that it can be compressed until the resulting pressure causes the fuel to ignite. Glow plugs assist in getting to the right temperature to allow this reaction to happen. If your glow plug has failed, you won't be able to achieve the correct temperature and no combustion will occur in that chamber causing a loss of overall power from your engine and diminished performance as a result.

Just as an aside, the compression chamber in your diesel engine needs to get up to about 450 degrees Fahrenheit. If the mix of pressure and heat from the glow plug can’t attain that temperature, then it will simply not be enough to ignite the diesel fuel.

The most notorious sign of something going wrong under the hood of your car is the check engine light. It's helpful in alerting you to a problem that's occurring in your vehicle but unhelpful in that it really doesn't give you any details about why the light came on in the first place. If it's related to a problem with your glow plugs, you're likely going to have to rely on the check engine light plus some of the other symptoms we mentioned to guide you in the right direction. But there would be no way to know that this was related to your glow plugs unless some of the other symptoms were occurring as well, with one exception.

If you are not satisfied to just take a guess as to why a check engine light came on your engine, or take it to the mechanic for them to determine what happened, you do have an alternative. You can pick up an OBD2 scanner, also known as an onboard diagnostic scanner, from a site like Amazon.com for under $30. An OBD2 scanner is what a mechanic will use to determine why the check engine light came on your dashboard. When you plug it into your car it will give you an error code and typically a short message about the nature of the error that stripped the check engine light in the first place.

There are a handful of codes that the scanner will produce if the issue is related to glow plugs, like p0670 which indicates a glow plug module error for instance.

How Much Do Glow Plugs Cost?

Just like with spark plugs, you're going to need to replace those glow plugs eventually and, just as with spark plugs, it's not going to set you back too much. All things being equal these are some of the cheapest parts you can buy to maintain the well-being of your vehicle. If you head to AutoZone you'll see that you can actually get some glow plugs for under $10 a piece. That's not too bad at all. You want to make sure you're getting the exact right plug for your vehicle however, and some do cost a little bit more so it's best to try to get the exact same kinds you already have or find out what your owner's manual recommends.

How to Change Glow Plugs

If you need to replace the glow plugs in your engine the process is not that difficult to get done.  As you've seen, they're not all that expensive either so if you don't want to head into a mechanic to get this job done you could try doing it on your own.  If you go into a mechanic to get your glow plugs replaced it could cost you anywhere from $250 to $400 to get the job done. However, as we've seen, the cost of new glow plugs is fairly inexpensive so you can potentially save quite a bit of money handling this job on your own. You do need to make sure you have the exact right glow plug to replace the old one as if you choose the wrong one it may end up causing more damage or not working at all.

Step 2: With the wire removed you're free to pull the glow plug from the engine. Use a ratchet to loosen the plug and then pull it out. They look kind of like very long bolts and it will take a little bit of time to get them fully released as they are longer than spark plugs in a gasoline engine.

Step 3: This is a good opportunity to clean the electrical contacts. The wire, and the nut that holds the plug in place can become dirty or corroded over time. You can also use a reamer to gently clean out the glow plug hole at this point. Just enough to scrape off any potential build up or corrosion.

Step 4:  At this point you can swap in the new plug for the old one. Use a ratchet to tighten it but only to the point where you get a little bit of resistance. You don't want to over tighten them because you could end up breaking them either installing them now, or when you try to remove them later.

Step 5: Reattach the wires to the plug be sure you include the nut and make sure that the right wire connects to the right glow plug.

The whole process of swapping your glow plugs should take about an hour, but it could take much longer if you have a more complicated engine. If you have valve covers that need to be removed, that will obviously complicate matters.

If you're driving a diesel engine where the temperature can dip around freezing in the winter, then you definitely want to make sure you have properly working glow plugs. Diesel fuel is notorious for performing poorly in the cold weather, which is why these were created and installed in your engine in the first place. If you start noticing issues getting your vehicle going on a chilly morning, then it never hurts to take a look at the plugs to make sure they're still working and swap out any broken ones if necessary. Since they only cost around $10 to $20 a piece, it's an easy maintenance job that can definitely improve your vehicle's performance.