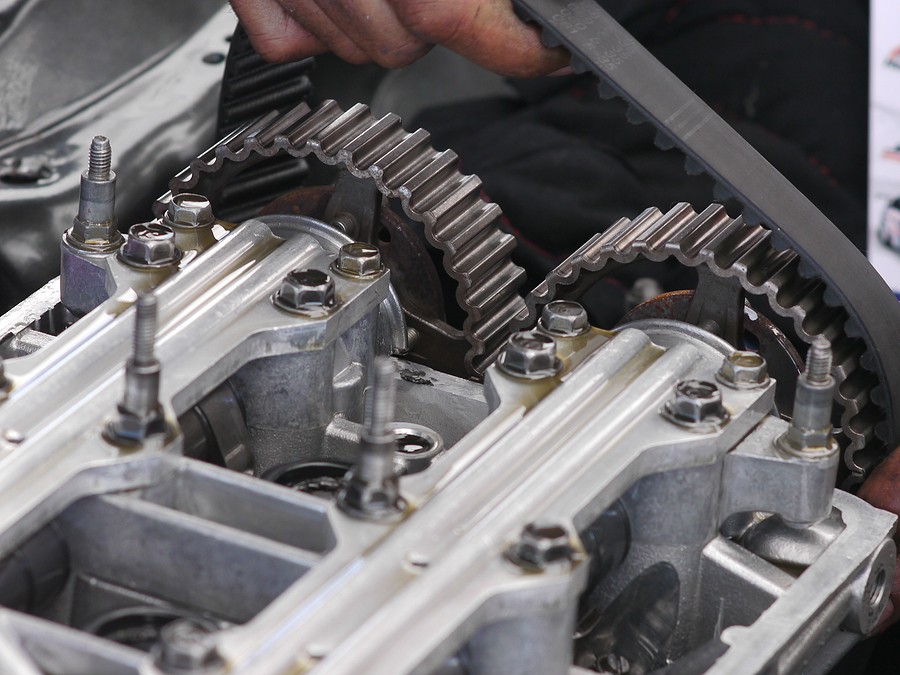 Every car with a modern combustion engine that runs on gasoline requires a timing belt or a timing chain to operate. The timing belt connects the crankshaft and camshaft together in your engine. One end of the timing belt loops over a gear attached to your crankshaft and the other goes over a gear on the end of the camshaft. That means that as the crankshaft turns and causes the pistons to rise and fall in the cylinder the camshaft will also turn the valves to open and close. In an interference engine this is crucially important because the pistons will crash into the valves if the timing is off.

It's possible if you've been looking for a new timing belt or you have heard people discussing them and you've come across the term Gates timing belt. This isn't a different kind of timing belt per se, rather than one that's actually been made by the Gates company. Generally, when someone is referring to a Gates timing belt, they're using it to refer to the name brand of timing belt in much the same way that you might refer to a Kleenex tissue or a Goodyear tire. The reason people mention Gates at all is because Gates is known for their timing belts as the company has a long history with them.

The History of the Gates Timing Belt

The reason we call a Gates timing belt by name is because of how the company is involved in the entire history of timing belts. It was back in 1917 when John Gates, the founder of the Gates company, actually created the world's first rubber V belt. Then, 28 years later, in the year 1945, Gates created the first timing belt that used teeth to help keep it synchronized with the gears. At the time it was called a synchronous belt. By 1979 the Gates company had created their first serpentine belt. That means that as of the year 2020, Gates has over 100 years of experience making belts that operate in the engine of your car. In much the same way that we link Ford with the popularization of the automobile on the whole for the driving public, Gates is responsible for the mass production and popularization of timing belts.

When you hear a mechanic or another car owner refer to a Gates timing belt, it's possible that they're just using that as an innocuous term in reference to any belt. Some people will simply refer to the name brand of a thing in place of the actual item regardless of whether it was made by Gates or not. Of course, they could be a brand loyalist and are only interested in a Gates timing belt. No doubt you know at least one or two car owners who are the same way about the manufacturers of their cars. The same kind of people who only want to drive a Ford or a Chevy and will never drive anything else. Some people will swear by a Gates timing belt and not want to use anything else simply because the company, as the creator of timing belts, have a reputation in the industry for making a good quality product.

What Does a Gates Timing Belt Do?

Your engine requires precise synchronization to work the way that it does. The timing belt is the most important part in ensuring this precise timing goes off without a hitch. When the timing is thrown off too badly you can end up with serious engine damage if the pistons crash into the valves of the cylinder because the crankshaft and the camshaft are no longer synchronized. If the belt is still working but not working as well as it should, you can still suffer a number of problems because the timing doesn't work out right.

When the Gates timing belt is working the way it's supposed to, the belt will loop over both the camshaft and a crankshaft with the teeth on the inside of the belt gripping both of these gears and turning them in precise order. For every rotation of the crankshaft gear you'll get a half rotation of the camshaft gear. This is also known as a 1: 2 ratio.  Your camshaft will do one full rotation every time the crankshaft rotates twice. If this timing is thrown off at all not only will the pistons and the valves not be working in precise synchronization you risk the spark igniting at the wrong time and the air and fuel mixture being injected into the combustion chamber at the wrong time as well.

How Long Does a Gates Timing Belt Last?

Your car manufacturer should have a detailed list of scheduled maintenance that you need to engage in to keep your car working the way it's supposed to work. It will tell you when you should be changing the timing belt in your car. In terms of Gates timing belts, you can expect them to last between about 60,000 miles and 105,000 miles. That works out to about 7 to 10 years of driving depending on your habits. Again, refer to your owner's manual to get a more specific idea because how the car runs has more of an effect on timing belt longevity than the timing belt self. You should always follow the manufacturer's recommendations for scheduled maintenance and repairs for your timing belt just to be safe.

No timing belt is meant to last forever, not even one made by the Gates company. Gates makes timing belts for just about every vehicle on the road ranging from Nissan to Ford to Chevy and more. As we said, your typical lifespan of a timing belt is going to be between 60,000 miles and 105,000 miles. But there can be problems that crop up even before then that can make your belt fail, either manufacturing defects, accidents, or mechanical problems. There are a number of signs and symptoms you can be on the lookout for to let you know that your timing belt has a problem. If you experience one or more of these, then you really want to take your car into a mechanic so they can inspect the timing belt just to make sure it's working the way it's supposed to.

One of the most common and potentially damaging symptoms of a bad timing belt is an engine misfire. This occurs when the combustion reaction in your engine doesn't occur when it's supposed to as a result of the timing being off. If your timing belt begins to slip loose because it's worn out or some of the teeth are missing then the valve may not be opening at the exact right time or the fuel injectors may not be squirting the fuel into the chamber at the exact right moment for the spark to ignite them. It all comes down to the precise timing being thrown off resulting in a problem.

If no combustion reaction occurs in one of the cylinders of your engine, then you're going to lose power equal to the number of cylinders that you have misfiring. So, if you have a four-cylinder engine and one of the misfires you're getting 1/4 power loss as a result. Continuous engine misfires can cause serious damage to your engine.

Engine Won't Start at All

If the timing belt is broken completely in your engine, then the camshaft and the crankshaft will not be connected at all and that means your engine simply can't start. You will hear the starter motor engage and every other part of your car will work properly, but without the belt to actually get the engine going in the first place no combustion reaction can begin and the car will simply be unable to start.

Noises in the Engine

A faulty timing belt will make a very distinct sound as your car is running that is hard to mistake for something else. You may get an intermittent squealing sound, particularly when you're idling or accelerating, but the more common noise associated with a bad timing belt is a ticking sound. Not unlike a fast-moving roulette wheel, this fast-paced and repetitive tick as a result of the teeth haven't been worn down or torn off the inside of your belt. As it spins rapidly around the camshaft and crankshaft gears, you'll hear that distinct noise.

There is a case that secures your timing belt that keeps it protected from dirt, debris, and oil. However, if this case begins to come loose, particularly around the bolts, oil may actually get into it from those areas. If the oil gets on the timing belt that can make it come loose much more quickly since it will be greased up, and it will also wear down the material. In addition, if the teeth wear off your timing belt, they will fall down to the oil pan below and can potentially cause it to clog up. That will reduce your oil pressure and could lead to your engine overheating as a result.

If you're noticing your car shaking and vibrating considerably even when you're just sitting still with the engine running, that's a rough idle situation potentially resulting from a worn-out or damaged timing belt.

What Does a Gates Timing Belt Cost?

You can find Gates timing belt kits on a site like Amazon for about $100 to $220 each. The timing belt kit includes the belt as well as water pump and the rest of the parts needed to replace a timing belt in your engine. Water pumps don't necessarily need to be switched at the same time but they almost always are because they have the same lifespan as a timing belt and the timing belt is what provides power to the water pump as well. If you're switching out one, it's a good idea to switch or the other so that they can experience the same wear and tear together. It’s also because it takes quite a bit of effort to get to that part of your engine anyway, so there's no sense putting it off the replacement of one and decided to go back and do it again later on

The cost of replacing a timing belt when you go to a mechanic can often run between $500 to as much as $2,000. The large range is because there are a lot of labour costs associated with replacing your timing belt. It's an in-depth repair job that requires getting pretty deep into your engine. And of course, some vehicles are just going to be more expensive to repair than others. An Audi A4 for instance tends to have high repair bills and a Toyota Camry simply because it's a higher-end automobile and that's par for the course with a more expensive vehicle.

Gates is known for making high-quality timing belts and they have over a century of experience making belts that you can rely on. All things being equal, you can expect a Gates timing belt to give you some pretty quality service and reliability. But no timing belt is meant to last forever, so even if you use a high-quality Gates belt you can expect that it's going to fail eventually so you need to be on the lookout for the symptoms that we've mentioned. A broken timing belt can cause serious damage in your engine if it happens while you're driving.  If you notice symptoms of a bad Gates timing belt, get it checked out by a mechanic as soon as you can.