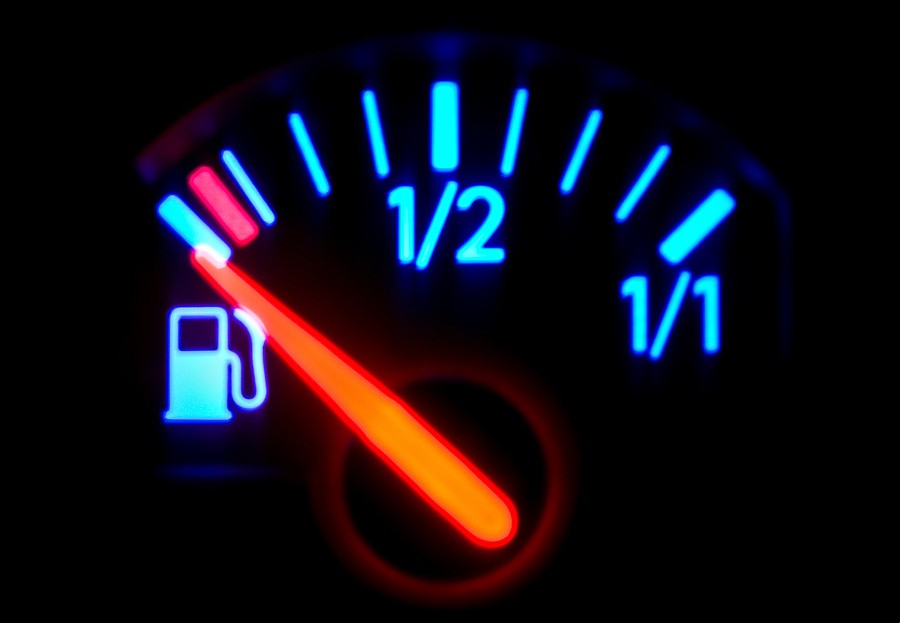 In cars, the purpose of the fuel gauge is to indicate the amount of fuel in a fuel tank. It has two parts: the indicator on the dashboard and the sending unit in the tank. A bad sending unit is the most common cause of fuel gauge reading incorrectly. Before we further discuss what makes a fuel gauge read incorrectly, it’s better to first understand how it works.

How does the fuel gauge work?

It is common for a sending unit to use a float connected to a potentiometer. As the tank empties, this float drops and slides a moving contact along the resistor which increases its resistance. Also, when the resistance reaches a particular point, it will also make the “low fuel” light to turn on on some cars. Meanwhile, the indicator unit, which is usually placed on the dashboard, measures and displays the amount of electric current flowing through the sending unit. The needle points to “F” meaning a full tank when there’s a high tank level. The needle points to “E” meaning an empty tank when the least current is flowing and the tank is empty. Some cars use other indicators like “1” for full tank and “0” or “R” for an empty tank.

The fuel gauge system can be fail-safe. When an electrical fault opens, the electrical circuit makes the indicator show that the tank is empty (in theory, telling the driver to refill the tank) instead of full (which would make the driver run out of fuel with no prior warning). Wear or corrosion of the potentiometer will give false readings of fuel level. But this system has a risk attached to it.

An electric current is transmitted via the variable resistor to which a float is connected, so that the value of resistance depends on the level of the fuel. In most fuel gauges in cars these resistors are on the inward part of the gauge, for example, inside the fuel tank. Transmission of current through such a resistor has a risk of explosion and a fire hazard. These resistance sensors also indicate an increased failure rate with the dynamic additions of alcohol in car gasoline fuel. Alcohol speeds up the corrosion rate at the potentiometer since it can carry current like water.

A pulse-and-hold methodology is being utilized by potentiometer applications for alcohol fuel. It also has a periodic signal that is sent to detect fuel level decreasing the potential of corrosion. This is why there is a demand for a safe, non contact method for fuel level.

How can you tell if your gas gauge is broken?

When there is an issue on the sending unit, the car will experience issues with fuel gauge like a fuel gauge reading incorrectly. This can put your car at risk of running out of fuel. A bad or failing fuel gauge sender will show a few signs that can alert you of a potential problem.

The fuel gauge sender is not a regularly serviced part. Usually, it is only serviced when the fuel pump fails. Nonetheless, it plays an important role in the proper operation of your car. If you start noticing signs of a failing fuel gauge, or you suspect there is a problem with the sending unit, have it inspected by a professional technician to determine if you need to replace your fuel gauge sending unit.

How do you fix an inaccurate fuel gauge?

A stuck fuel gauge on your car is not only annoying, it is also a hassle as you need to keep track of the number of miles you have driven since your last fill-up to prevent you from running out of fuel. A fuel gauge functions using a series of electrical connections from the sending unit to the gauge cluster, and when one of these connections fails, so does your fuel gauge. The good news is, you can troubleshoot the problem yourself and avoid an expensive repair. Here’s how you can do it:

Turn the ignition on and off a few times, and observe if the needle on the fuel gauge moves. If the needle does not move, it most likely means you have a blown fuse and it is due for replacement. The fuse box can either be found on the driver’s side dash or in the engine compartment. Refer to your car owner’s manual to find out where your fuse box is located.

Check to confirm that all of the wiring is securely connected to the back of the fuel gauge. To do this, you have to remove the dashboard to have access to the instrument cluster. Consult your car owners manual as the process to do this varies from vehicle to vehicle.

What would cause the fuel gauge to stop working?

The fuel gauge is a relatively simple circuit, but because of that simplicity each part of it is essential to its operation. Here are different reasons the fuel gauge stop working:

Fuel gauge can stop working as it should be when there’s an issue or issues with the circuit. The fuel sending unit may fail to have a source voltage, the fuel gauge may fail to have a fuel sender voltage, or the ground for either may get interruptions. This would depend on the location of the fault. Corrosion and loose connections can also be the reason for a fuel gauge to stop working, particularly at the Fuel Pump Module as it is often exposed to the elements.

This does not happen a lot, but it is still a possible issue. If the internal circuit fails, the gas gauge may only work in one section, such as between EMPTY and HALF or between HALF and EMPTY. When the internal circuits are shorted, they may falsely give a FULL or EMPTY reading. The fuel gauge will likely sit at EMPTY when the circuit is open, and may never move.

This is the least common cause and can be the most costly problem to repair. Recent instrument clusters are full-integrated circuits and may not even come with replaceable bulbs. If the fuel gauge fails as part of the cluster, the entire unit must be replaced.

How can I determine the source of my fuel gauge issue?

Before starting to test your fuel gauge, prepare the following tools: a digital multimeter (DMM), an electrical wiring (EWD), and basic hand tools. Do the following tests to identify the source of the problem:

Many modern vehicles come with an instrument cluster self test feature that can test computer-controlled instrument clusters. You can find the procedure in your owner’s manual or online. The test involves testing the digital lights and readouts, swiping the gauges through their ranges. Pay close attention to see whether or not the fuel gauge sweeps smoothly from Empty to Full. Keep in mind that some steps of self-test may stop the fuel gauge at ¼, ½ and ¾.

This test should be done when the tank is lower than half level. This is to prevent fuel splashing. Begin by ensuring that the plug is clean, dry and corrosion-free. The pins should be straight and the connector should be fully seated. Take off the pump module so you are able to manipulate the float arm. Back-probe the connector and check for voltage with the key in the ON position (but do not start the engine). One of the pins should always have 5 V or 12 V. One of the other pins will be voltage feedback to the fuel gauge. Output voltage should increase or decrease (which depends on whether you are moving the float up or down) smoothly when you swing the float arm. If you get an incorrect input voltage, inspect the circuit between the ignition or its voltage source and the sending unit. The issue is likely with the sending unit when the output voltage is incorrect. But when both the input and output voltage are correct, it likely means you have a circuit issue between the fuel gauge and sending unit.

These tests should allow you to identify the problem, but be careful of modern computer-controlled instrument clusters and fuel gauges, since they can be confusing to diagnose and fix. It is highly recommended for you to have a professional diagnose complicated systems to save yourself from expensive mistakes.

How much does it cost to fix a fuel level sensor?

The fuel gauge is there for your convenience. You can be stranded when you run out of fuel. If your fuel gauge is reading incorrectly, working intermittently, or failed, it is highly recommended to have it replaced when you can. It typically does not cost much, and it will save you the trouble of running out of gas or constantly tracking how many miles you’ve driven since your last fill up.