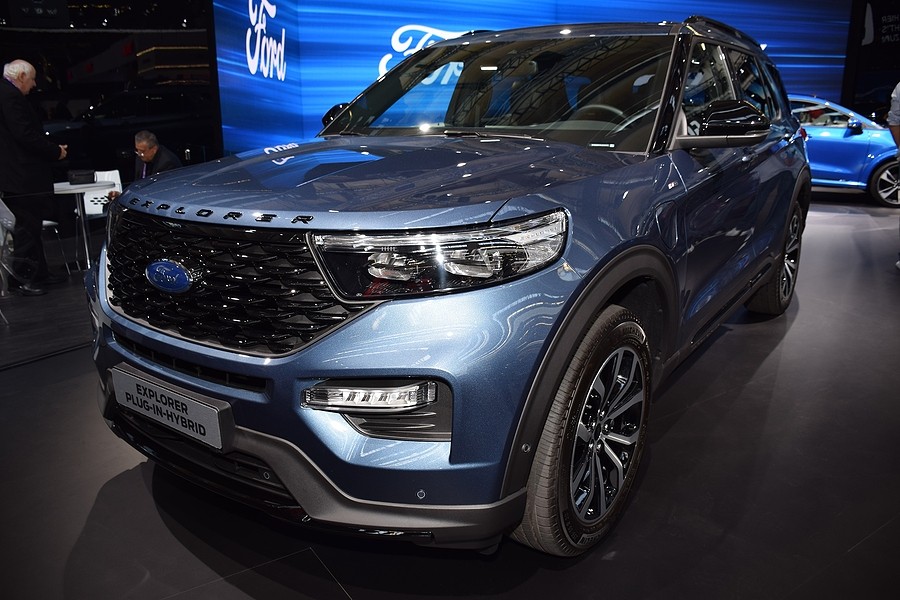 The Ford Explorer offers drivers a range of SUVs- and is manufactured by Ford Motor Company. The Explorer arrived on the scene in 1991- with the first four-door SUV produced by Ford- as a replacement for the two-door Bronco II.

With popularity, as well as reputation of stability, the Ford Explorer continues to be a great-selling vehicle for Ford. In fact, the Explorer is in its sixth generation, offering various powertrain layouts and technology that rivals its competition.

According to the Ford Motor Company, the 2020 Explorer “…has been completely redesigned — inside, outside and under the hood. In addition to capability enhancing features like rear-wheel drive, there are also two available trims. Ford now offers a commanding, no-compromise Explorer Limited Hybrid as well as the most powerful Explorer to date, the Explorer ST. With 400 horsepower, 415 lb.-ft. of torque and top speed of 143 mph, an ST brings the adventure to you.” Additionally, 2020 is a year that brings several models of the Explorer. They include: The Explorer, The Explorer XT, The Explorer Limited and The Explorer ST. “Explorer helps you make the most of your next big adventure with the addition of a rear-wheel-drive platform and your choice between four powerful engines. For additional traction on your escapades, available Intelligent 4WD with Terrain Management System™ helps you get where you’re going. And with the ability to tow up to 5,600 lbs., when properly equipped, you won’t be slowed down, not even with a hefty camper in tow,” adds Ford.

Is The Ford Explorer Reliable?

Reports indicate that the Ford Explorer has a general rating of “3.5” on a scale of 5.0, being the highest. Annual repair expenses will run an Explorer owner between $700 and $1000. Generally, the repairs for an Explorer run between scheduled maintenance and issues. The problems that owners have with the Explorer seem to be low, thus making major repairs typically uncommon for the Ford Explorer.

How Long Do Ford Explorers Last?

For many Explorer owners, their vehicles last well over 100,000 miles. Let’s take a look at the longevity of owners, from Explorer enthusiasts.

I have a 2002 Explorer with the V6[engine]. [It] Still cranks up and runs [well]. I had to change the rear wheel bearing at 195k and the tranny at 220k, but other than that only simple maintenance has been needed.”

“My four older Explorers are holding up rather well (96 to 2003). All are on the road and with the 90s models all having over 200K. Maintenance is the king? Oil, both engine and transmission are cheap.”

“It's early 2015 and I bought my 04 Explorer used with 20,000 miles on it. It's always run good and currently has 140,000 miles on it. I've averaged around 12,000 miles a year. The maintenance costs have been predictable over the years. I follow the dealer recommendations for oil/fluid/filter changes and this basic maintenance is done at my local Jiffy Lube. This basic maintenance might run about $300 a year. Then there is the more expensive maintenance like brakes or the occasional steering/suspension/alternator/exhaust component. This more costly maintenance usually runs around $1,000 to $1,500 a year.”

“[How long do Explorers last?] [They last] Pretty darn long. I have a 1995 V6 explorer that has 369,000 miles on it and is still running to this day. I've had to give it a bit of time up and replace a lot of stuff attached to the engine but the engine itself is still solid and sounds as quiet as my 05 Sonata I purchased for work. These babies last forever if you keep up with maintenance and change out small stuff here and there lime the alternator and power steering pump.”

What Year Is The Most Reliable Ford Explorer?

Reports indicate that the best model year of the Ford Explorer is 2011. “It was the first model of the fifth generation and signaled the change of the Explorer to become a crossover vehicle. It also saw the inclusion of a push button start feature and adaptive cruise control,” as stated by Moneyinc.com.

Common Problems with the Ford Explorer

“This is the third time we have had transmission issues. We have spent well over $4500 to dealer and independent mechanics over the years and the last major work was done less than 1 year ago and cost close to $2000 at a dealership and I just passed along this car yesterday to my 18 year old son who was over the moon excited to finally get his first car and it didn't last 24 hours!”

“I have a 2004 Ford Explorer that I love. It began shifting super hard when I would put it into reverse. Putting it into drive was no problem until you applied pressure to the gas pedal to make it go and the engine would race and it would slam into the next gear. We took it in to be looked at to see if there was an “inexpensive” fix to the problem. However, they said that the overdrive had put sheered and put shavings into the oil pan etc. The mechanic said this is a known problem and has been a known problem for this model of Ford Explorers and yet somehow there is no recall for it.”

Another problem that Ford Explorer contend with, is rough idling and the engine stalling. Check out what drivers had to say about these issues:

“Truck starts, runs and drives great. [But] the problem is it idles rough. This only started about two weeks ago there is no dashboard lights on. I just had it tuned up and a fuel control tune up as well. [But my Explorer] still idles rough my mechanic said the next step would be to change the injectors which is a big investment on top of what I just did. And it’s not guaranteed…”

“I started having trouble with my 1993 Ford Explorer XLT. Engine would stall from time to time, sometimes idle roughly. [My Explorer also] leaked coolant from the intake and I knew it had to be the upper intake gasket. So, I replaced the intake gaskets and I replaced the idle air control valve gasket (IAC). Not that I needed to, but to be on the safe side I did anyway. It was a successful repair and now it's drive great again.”

Another issue with Ford Explorer vehicles is faulty radiators. Take a read of what some Explorer owners have endured with a bad radiator.

“Bought it used 1 1/2 years ago with 118,000 miles. I filled up the coolant of my Explorer every couple of weeks for the last months and last weekend all the coolant was under my car. Ford replaced the radiator and 2 hoses, they charged me $1,300. I don't know if the previous owner had the same problem already.”

“All the coolant leaked out onto my garage floor overnight. Repair shop replaced the radiator and mentioned that radiators for 2006 Ford Explorers are becoming hard to locate due to the number of complaints that are being reported recently. I contacted the Ford dealer prior to getting my vehicle into a nearby shop. The Ford service reps never bothered to get back to me on this problem.”

The air conditioner for a lot of Explorer owners seems to be a top issue. Check out what some owners had to say.

“Two months after I bought the car, the AC went out. It was blowing, but it was not cold. I went to get it fixed and it ended up costing me about $900. They said that there was a leak in the line and they had to take everything out to replace the line. A few months later the water pump went out. I had that replaced as well, but I got a really good deal…”

“Took the car off the lot brand spanking new. Tried the AC after driving the car about 10 miles, and found that it did not work. Returned the car first time, and they refilled the refrigerant, and said that it was not properly filled at the factory.  About three weeks later (on a trip of course) the same thing happened. We returned the car, they researched the issue, and after it being in the shop for a few days, Ford dealer said that they did not refill it properly when it was returned the first time…”

What Is The Best Model Of Ford Explorer?

According to the nhtsa.gov website: “Ford Motor Company[is] recalling certain 2020 Ford Explorer vehicles equipped with 2.3L or 3.3L engines. The wiring harness may not have been properly secured and may contact the air conditioner compressor (A/C) pulley, potentially damaging the harness or the A/C belt.”

What Is Wrong With The 2020 Ford Explorer?

As Ford has issued a recall on the 2020 Explorer, it centers around a problem with secured wiring harnesses that has improperly fitted. Vehicles that are outfitted with either the 2.3-liter turbo-four or 3.3-liter V6 engines are a part of this recall. Cnet.com adds: “Should the SUV house one of the bad wiring harnesses, it may rub against the air conditioner pulley. This may damage the wiring harness or the air conditioner drive belt. In a worst-case scenario, contact from rubbing against the pulley could expose the wiring harness to an unfused circuit and cause a short circuit or fire.”

Other Ford Explorer recalls included a recall of specific Explorer model year 2011-2013 Explorer vehicles. The recall was issued, due to issues with the interior door handle return spring.

Looking to Sell Your Ford Explorer? Sell it to Cash Cars Buyer!

Are you looking to part ways with your Ford Explorer? You can sell it to Cash Cars Buyer! Whether your vehicle is running or not, you can sell it to us and receive fair market value for it!

Tell us all about your Explorer

Take the time to tell us all about your Ford Explorer. You can click here to input your information. Once complete, you will have a FREE online offer that you can use to call us!

Accept your offer on your Explorer

Once you have your FREE online offer, you can call us and speak to one of our friendly agents. She or he will ask you some additional questions about your Ford Explorer, in an effort to give you the best guaranteed cash offer! Love what you just heard?

Get paid and get that Explorer towed away!

Once you accept and approve your guaranteed cash offer, we will come to your home or location- appraise your car- and then pay you on the spot!

“Can I sell My Ford Explorer Without the Title?

Wanting to get rid of that Ford Explorer but you don’t have the title or it has been damaged? We buy SUVs with no title and we just may buy your Ford Explorer! In most cases, not having your title is not an issue. We ask that you have your Explorer’s registration as well as your ID for the sale of your vehicle.

Selling Your Explorer Has Never Been Easier!

We here at Cash Cars Buyer make selling a non running, dented, totaled and rusted Explorer quick, fast and easy! From our “FEE-FREE” services, to FREE towing and personalized service to your door, you won’t find a better junk car buyer in the business! Click here to get your FREE online offer! Then, let Cash Cars Buyer help you turn that Explorer into cash you can be excited about!