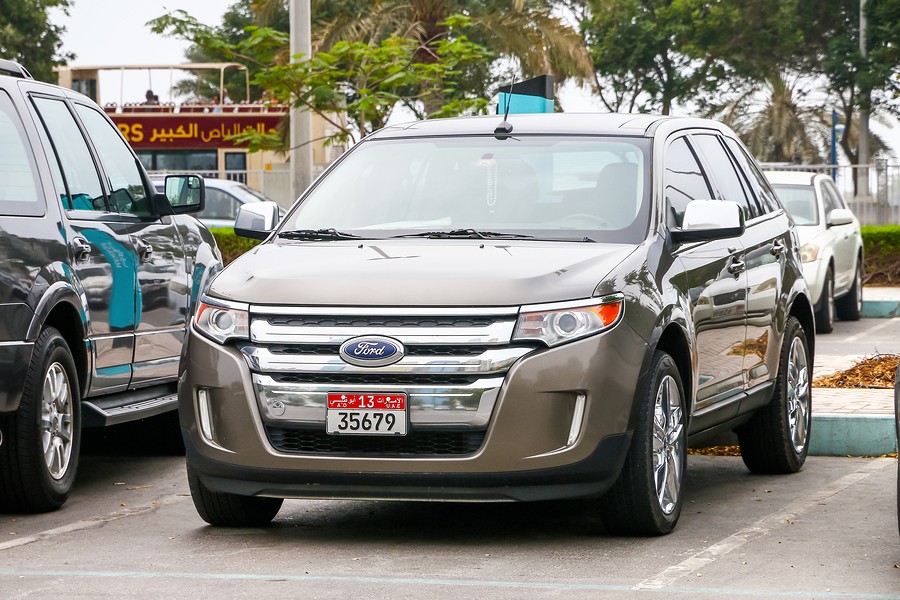 The Ford Edge was introduced in 2007 and has consistently been one of Ford’s best-selling vehicles for the past 13 years. A crossover SUV, every model year from 2007 onward has been rated as a top safety pick from the Insurance Institute for Highway Safety. That’s not to say the Ford Edge is without its problems, though. With so many model years behind it, some definitely performed better overall than others. If you own a Ford Edge or are looking to buy one, here’s everything you need to know about Ford Edge problems, year by year.

The first year for any model is often a little rough as some unexpected bugs need to be worked out. The 2007 Ford Edge was riddled with drivetrain and transmission problems and there were a number of complaints relating to airbag problems. In fact, Ford had to recall over 2,500,000 Edges because the inflator inside the airbag had the potential to rupture. In serious cases, that could dislodge pieces of metal through the airbag causing injury and death. The problem was incredibly wide-reaching as few companies have ever had to recall such a high number of vehicles in the past.

As we’ve covered before, airbag repair can be a costly fix so taking advantage of the recall when it was possible would have saved some money. Risking it today and an older model like this could definitely be a danger both in safety terms and financially.

The 2007 Ford Edge also had a recall related to issues with the fuel tank leaking as a result of corrosion. In addition, the foam seal between the windshield and the dash was bad on a number of these vehicles resulting in the need for the windshield to be removed, the seal replaced, and the windshield reinstalled.

This was the first year of several that Ford Edge’s suffered issues with fluid leaks around the axles as well stemming from the transmission or the power transfer unit. There was a serious problem with back-ordered power transfer units meaning that fixing this issue was a time-consuming one and some drivers had to wait months for the parts to come in.

The 2008 model year was exceptionally bad for the Ford Edge, and most experts will warn you away from this one. Transmission problems such as slipping with no warning were rampant and not an insignificant number of drivers complained that the engine would simply stop right in the middle of driving. Reported transmission failures were averaging around $2,800 to repair.

This model year was also subject to the same airbag recall as the previous year and the fuel tank corrosion issue.

In 2009 Ford had managed to get a handle on the engine and transmission problems that had plagued the Edge for its first two years. Few engine problems were reported for this year and though it was still under the airbag recall, there were few overall complaints lodged about this year’s model.

The most prominent issue in 2009 seemed to be a few brake problems. Brake pedals went too far to the floor, or the brakes felt unresponsive under normal foot pressure. This wasn’t a wide-spread problem though, and no recall was ordered.

The 2010 Ford Edge developed more issues than 2009’s model but was not as bad as 2007 and 2008 by a long shot. One of the most concerning problems was a faulty brake booster. Drivers complained of brakes making noise, not working at all, and the brake pedal being difficult to depress or having to push it all the way to the floor. The 2010 year was also under the airbag recall.

Electrical problems were a serious nuisance for many drivers of the 2011 Ford Edge. The “door ajar” light would not go out for any reason in some vehicles even when the door was securely closed. That meant that, even while driving, the lights would stay on as would a warning light and the warning chime that alerts you about the door being open. The National Highway Traffic Safety Administration fielded literally hundreds of complaints about this issue.

More serious even if less common were the engine issues with the 2011 model. The car would lose power and that yellow wrench light would come on without warning.

By 2011 the airbag recall was no longer in effect but there were recalls issued for a body control module that could overheat and cause a fire.

For the second year in a row, the Ford Edge still had electrical problems leading to that door ajar warning and light staying on all the time. The brake problems also carried over into this year’s model, with most drivers noting the brakes didn't work unless extreme pressure was applied.

Recalls for the 2012 Ford Edge dealt with some new problems that had not come up before. Due to a retention circlip problem, the halfshaft could disengage from the linkshaft. That would result in no power going to the wheels anymore and an increased crash risk as well as the risk of rolling away when in park.

A leak in the fuel pulse damper that could result in a fire was the cause for a second recall affecting nearly 30,000 vehicles.

According to CarComplaints, 2013 was the absolute worst model year for the Ford Edge. The most annoying concern that numerous owners brought up was that same electrical issue from the two previous years which Ford had still not addressed. The “door ajar” light that is meant to tell you a door is open stays on no matter how securely closed the door is. Nearly 400 owners registered that specific complaint on the website and hundreds more made it known to the National Highway Traffic Safety Administration.

Continued problems with the brakes and with the engine and transmission carried over to this year’s model. The “shift to park” warning light wouldn't go out either, resulting in a drained battery, useless key fobs, and an inability to adjust seats as a result. All of this points to serious electrical issues throughout the 2013 Edge. Of all the model years, this is the one you should avoid the most.

Finally, in 2014, Ford had taken care of the majority of their electrical problems and finally put an end to the “door ajar” warning and light in most vehicles. Reports of it remaining a problem were far fewer. The number of problems overall for this model year were significantly less than previous years and, in fact, CarCompaints.com recommends the 2014 as a fairly reliable vehicle.

The problems with 2014 included radio cutting in and out unexpectedly and the rear window shattering for seemingly no reason. It’s worth noting these were not widespread though and, on the whole, fairly rare.

There were two recalls for the 2014 Ford Edge. The first was for improper plating on the fuel pump that could cause the pump to fail and in turn stall the engine. The second was for the same disengaged halfshaft that had been a problem since 2012.

Sadly, the good work Ford put into improving the 2014 model didn’t carry over into 2015. This marked the first year of the second generation of Ford Edge vehicles and as is typical of vehicle redesigns, this one had problems.

Engine issues were a big safety concern for the 2015 Ford Edge. Drivers reported the engine would stall out while driving. The throttle body required replacement in a number of these cases, and it usually happened at low mileage.

For some reason, glass was problematic in the 2015 model, much more than previous years. Not only did the rear windshield shatter unexpectedly, but a number of drivers experienced the roof glass cracking as well.

Other problems with the 2015 Ford Edge included water leaking into the interior, and electrical problems ranging from premature battery death to total electrical failure.

The major recall for the 2015 Ford Edge affecting over 500,000 vehicles related to a problem that could cause the steering gear motor to detach, leading to a loss of power steering.

Steering and engine issues were also present in the 2016 Ford Edge, just not to the level that they had been in 2015. The adaptive steering warning light engaging for no reason was not unheard of, and glass breaking unexpectedly continued to be a problem for owners.

The steering gear motor recall carried over into the 2016 model year but there was a new recall relating to front airbags that either would not inflate, or the cushion would detach. Both of these could present serious safety risks for drivers and passengers.

By 2017 Ford had addressed most of the problems with the vehicle and this year was relatively problem free. Minor issues still plagued some drivers relating to brakes and engine problems, but they were not nearly as pervasive as previous years and in line with what you should expect from any vehicle.

There were some recalls relating to the 2017 Ford Edge including the same airbag problem from 2016 and one to fix a potential problem with a torque converter weld. If the weld failed, the vehicle would become unsteerable, but this recall only affected around 6,000 vehicles.

By 2018 Ford had improved the Edge even further and the number of complaints for this year’s model are extremely low. As you might expect there are some drivers who had problems with engine and electrical systems but at a rate which would make them on par or even less than those of similar vehicles in its class.

Crash-test ratings for the 2018 Ford Edge from the Insurance Institute for Highway Safety were high across the board with the only average ratings coming for driver-side structure and restraints.

There is one recall in place for the 2019 Ford Escape. The seatbelt webbing may detach from the anchor which would lead to the bet not working in the event of a crash. Problems aside from this recall are quite few and far between. A handful of drivers experienced clicking and other noises while driving relating to drivetrain problems. Problems relating to the glass leaking and breaking still popped up on random occasions as well, but not in great enough numbers to warn you off buying a 2019 model if you were interested in one.

The 2020 Ford Edge has received very few complaints mostly owing to the fact it’s so new that very few people even have one or have had one long enough to experience issues. Reviews for the 2020 Edge on Edmunds note that the inside of the cabin looks dated for such a new model and that the roof pillars are so thick that they compromise visibility with blind spots. In addition, the transmission seems a little slow to respond and that even over small bumps in the road the ride can get uncomfortable.

Is a Ford Edge Worth It?

As you can see there have been years in which the Ford Edge has been a very reliable automobile. It has consistently scored very high grades for crash testing in every single year, even when other problems plagued the vehicle. The most recent years have all been exemplary. If you are interested in a Ford Edge, you’re going to want to make sure to avoid those early years as 2007 and 2008 were problematic even when they were new and likely have not improved with age. Also, the 2011, 2013, and 2015 model years were so riddled with problems you’ll want to steer as clear as you can from all three. Only the 2014 model year really stands out as one more than five years old worth even considering if you're in the market for an older model Ford Edge.

There are a lot of Benefits to the Edge and it’s definitely worth considering if you’re shopping for an SUV, just be sure you’re aware of which years had those incredibly important recalls and which years are best avoided entirely.