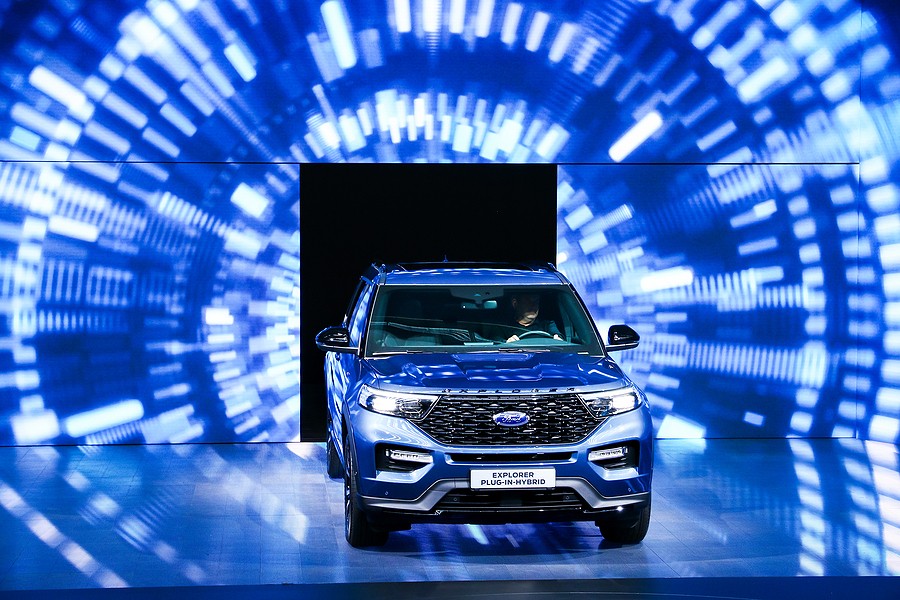 Ever since Ford introduced the transmission, it has been plagued with complaints and problems that many drivers have experienced. Ford has been slow to respond on some counts although there have been recalls issued in some instances. Let's take a look at all of the problems that the Ford 10-speed transmission has had, and what they've done to try to fix them.

The 10R80 transmission is, obviously, a 10-speed transmission. It's a rear-wheel-drive transmission controlled by a PCM or a TCM. You can find this transmission in a variety of vehicles including the F-150, the Ford Mustang, the Ford Expedition, the Lincoln Navigator, the Ford Ranger, and the Ford Everest. Along with the 10 speeds there is one reverse speed, and they are all controlled by four planetary gear sets. There's one mechanical one-way clutch, six friction clutches, a two-piece valve body with 8 solenoids and the external PCM or TCM that we mentioned.

Obviously, there is a lot of technical stuff to know in there, but in basic terms as it relates to you as a driver you just need to know that the 10-speed transmission has 10 speeds and it's capable of skipping over gears when you get the vehicle going as part of the normal operating process. Ford calls this single step and double step shifting. The single step shifting is what you would expect such as going from 1st gear to 2nd gear to 3rd gear. The double step shifting will skip right over gear and go from 1st gear to 3rd gear, for instance. Overall, this allows for the transmission to provide you with better fuel efficiency as long as it's working properly.

In early 2020 a driver from Pennsylvania filed a proposed class action lawsuit alleging that Ford 10-speed transmission was defective and could shift harshly and erratically causing the vehicle to jerk, lunge, and hesitate between gears.

According to the lawsuit there was a design or manufacturing defect present in the transmission that could potentially lead to serious accidents or even a life-threatening injury. The suit went on to claim that Ford was not doing anything about it and therefore they should be held liable. It also brought up the fact that in 2019 Ford had issued 3 recalls for problems with their 6-speed transmission that affected well over 1.5 million F-150 models that have been produced between 2011 and 2013.

The response from Ford regarding the problem with the 10-speed transmission was not to issue a recall but they did produce technical service bulletins which are instructions that dealers and mechanics could follow when addressing concerns that some drivers have. According to the technical service bulletins issued for the 10-speed transmission the abrupt and harsh shifting that drivers experience was within normal operating parameters.

In Ford's words the trucks are equipped with an adaptive transmission shift strategy which allows the vehicle to learn the transmission’s unique parameters and improve shift quality. If the adaptive strategy was reset the computer would begin a relearning process and that would require harsher than normal upshifts or downshifts for several days.

Despite Ford's position that this was just normal procedure, most drivers who experience problems didn't have them disappear within a couple of days and their feeling was that the adaptive transmission shift strategy really had nothing to do with the overall problems they were experiencing with the transmission

The plaintiff also claimed that they took their truck into a Ford dealer for technicians to take a look at it since it was still under warranty. The plaintiff says the technicians would not fix the issue and claimed that every truck with the 10-speed transmission made the same noises as this one so there is nothing to fix.

Months before the Pennsylvania lawsuit was filed another class action lawsuit was filed claiming that Ford's transmission caused life-threatening issues due to harsh shifting, jerking, hesitation and slipped gears. This one covered the 2017 to 2019 Ford F-150 models, simply because it was too early to catch the 2020 models.

One plaintiff in this lawsuit claimed their transmission started making noises after just six thousand miles and it would hold on to gears for too long, exhibit power loss when shifting or when cold. At another point the transmission failed completely and they weren't able to accelerate or shift. The dashboard displayed a message reading drive mode not available.  This lawsuit also covered issues about drivers getting whiplash from the severely jerky motions caused by poor shifting.

By the spring of 2020 Ford had issued a safety recall on select models of the F-150, the Ranger, and the Expedition that were equipped with 10-speed automatic transmission exhibiting problems. In the vehicles affected by the recall, a clip that locks the gear shift cable to the transmission may not have been fully seated. That could lead to the partially seated clip causing the transmission to be in a gear state different from the gear shift position selected by the driver. Basically, what that means is you could shift your car into park and actually remove the key from the ignition, but the transmission will not have actually shifted you into park potentially leaving you still in drive or neutral. Without the parking brake engaged, that left your vehicle subject to rolling away.

The recall of these affected vehicles covered 55,000 Ford models in total.

According to a number of drivers who have complained about it to places like the National Highway Traffic Safety Administration, Ford 10-speed transmission is prone to producing loud clunking noises upon start-up. At least one driver claimed that their vehicle completely lost power as they tried to accelerate through an intersection and the transmission would no longer respond at all, whether to shift up or down. Other drivers claim that the transmission would stay in one particular gear essentially making them undrivable.

One of the more concerning reports that comes from several drivers is that the harsh shifting between gears that produces a jerking or lunging motion was so intense that it actually gave some drivers whiplash.

It has been recommended to some drivers that if they're having issues with erratic shifting, missed shifts and other related issues that they might want to look into replacing the valve body in their transmission. This would be the step you would take after trying to update any relevant software which could potentially have been the problem for some drivers or doing an adaptive learning drive cycle to try to get the transmission working properly again.

The valve body replacement could potentially cost you somewhere between $400 and $900 to get done.

Another similar issue to the one that prompted the recall from Ford in the spring of 2020 is that there is a pin that attaches the transmission shift linkage to the transmission itself that may come out. When that happens, it can prevent the transmission from responding to movements from the shift lever, essentially locking you in whatever gear you're in when the pin pops out. This could be extremely dangerous if it happens while you were driving on the highway, for instance.

Another small but aggravating issue that some drivers experienced with the transmission was that the gear position indicator would not illuminate. This was a problem with F-150, F253, and F-254 trucks. The shift indicator on the display is supposed to light up and show you what gear you are transitioning into. However, in some of these models it simply did nothing or would turn off randomly.

This problem was exacerbated by the fact that there was no clear-cut solution for how to fix it since the reason it happened in the first place didn't make a lot of sense. Some drivers had success by turning off the power and all the lights and then turning things back on again. One driver even said that putting the windows down was what managed to get the indicator lights to turn back on again.

Is the 10-Speed Transmission Better Than the 6 Speed?

When it comes down to it, the 6-speed transmission that Ford offers is far smoother than the 10 speed. When the 10-speed is working properly it is more fuel efficient and will get you somewhere in the neighbourhood of five miles per gallon better efficiency overall. Unfortunately, this is just how things work on paper. As we’ve seen when it comes to the practical application of the 10-speed transmission, it really hasn't proven to be exceptionally reliable for most drivers.

Because Ford isn't covering problems with the 10-speed transmission under warranty, repairing any significant problems can be a little tricky. If the problem with your vehicle is so bad that you feel like you need to have the transmission repaired, you're looking at a fairly expensive repair bill. Any transmission is going to set you back quite a bit of money when something goes wrong with it. For an F150, for instance if you need to get your transmission replaced it could end up costing you somewhere in the neighborhood of about $5,000 including parts and labour.

Your best bet if there's a problem with your transmission and you need to get it fixed is to try to get a refurbished transmission which will defray some of the cost a little bit or, even better, is to find a salvaged transmission that's in good condition. The salvaged transmission can cost you several thousand dollars less. Unfortunately, if you're getting another 10-speed automatic transmission from a Ford, it may be subject to the exact same problems since Ford isn't acknowledging that there is a problem in the first place.

As you can see, the cost of replacing transmission in a Ford, or any vehicle for that matter, is extremely steep.  Unfortunately, some of the issues that drivers have experienced with their transmission are the kind that can't simply be ignored or put off for too long. While it's possible that something will come of the class action lawsuits filed against Ford in the future, the fact is this kind of litigation tends to be a very long process. It could be years before everything is settled, and there's no guarantee that Ford will be held liable for any of the problems even when the lawsuits are finished.

The Ford F-150 is the best-selling truck in the world and has been so for many years now. Ford is the biggest automaker in the world for a reason. They make reliable vehicles that many drivers really enjoy. But when you produce vehicles at the volume that Ford does there are bound to be issues that crop up from time to time. Their 10-speed transmission is definitely something that came off the line with some defects in it and that will need to be addressed at some point in time. Unfortunately, the person who addresses it may not be Ford and it could just end up being your responsibility to take care of any issues at the end of the day.

With that in mind, you may want to reconsider investing in a Ford truck that has a 10-speed transmission right now, at least until things get cleared up in terms of how Ford plans to proceed with future models and whether or not these lawsuits are going to play out in favor of the plaintiffs or the automaker.