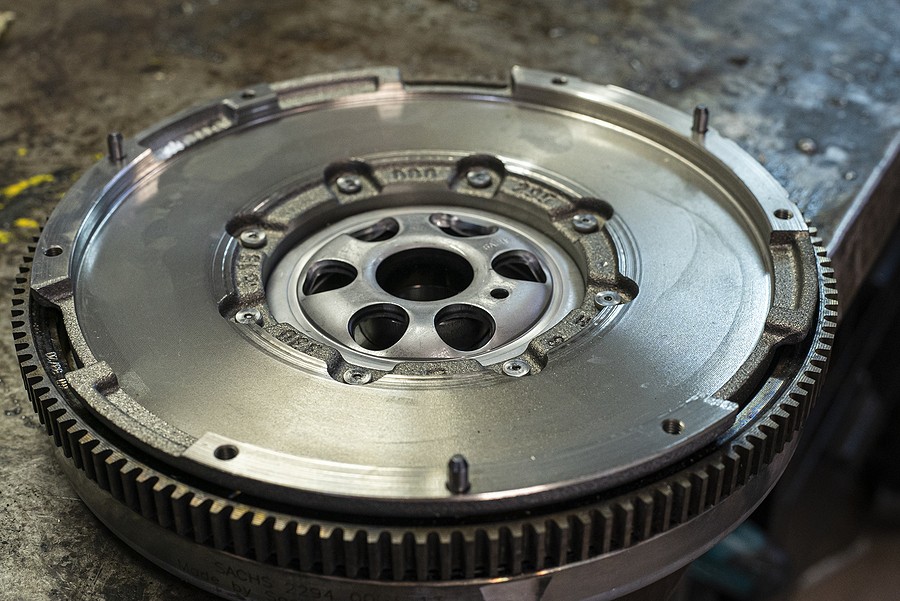 The flywheel in cars functions as the interface between the engine and the clutch system. It is a spinning disc made of heavy steel or carbon fiber in some modern cars. It is the one that stores rotational energy when your car is idling or when at a stop. The flywheel in cars is very important since it balances the engine, provides mass for rotational inertia that keeps the engine running, enables electric starter, and it connects the engine with the transmission through a clutch so it can transfer power to the wheels. If the flywheel malfunctions, you will experience its symptoms such as slipping gears, vibrating clutch, burning smell, car not starting, or the difficulty in changing gears.

Flywheel in Cars: What is a Flywheel on a Car and What Does it Do?

The flywheel in cars is a simple device in the form of a thick metal disc which is usually made of steel, cast iron, aluminum, or in some newer models, carbon fiber. It needs to be built with strong materials to keep it from warping or flexing. This large, heavy disc is connected to the crankshaft’s end and works with the clutch disc to engage drive to the wheels. Flywheels are usually found in cars with manual transmissions since some of the automatic ones use flexplate which also connects the transmission to the engine.

The flywheel in cars has been specifically weighted to the crankshaft of the car to balance or smooth out any uneven feeling due to even a bit of imbalance. This imbalance can happen because the engine vibrates and can move unsteadily from side to side when each of the pistons fire at a different angle. This is due to the pistons being offset from the middle of the crankshaft. The flywheel in cars with its weight helps counter this wobbly motion, helping the engine on its mounts to be stabilized and balanced. It can also help lessen the vibration all over the car.

The crankshaft turns the pistons’ up and down movement into rotary motion when the engine starts. But this motion tends to be jerky since the power is only generated twice for a four-cylinder engine, or four times for an eight-cylinder one throughout an engine revolution.  Now, to keep the car’s engine running between each of the piston firings, the flywheel uses rotational inertia. This helps keep the rotation speed of the crankshaft constant and smoothens the engine speed.

The flywheel in cars also helps reduce the wear and tear on many drivetrain components. It does this by balancing the movement of the engine and by smoothing out its speed. Even though the engine and the transmission shafts are aligned to each other, the connections between the transmission and the axle are not, with the driveshaft using universal joints that always change angles when they turn. The flywheels in cars can help lessen the wear and tear on these joints.

Customizing its weight for specific purposes.

Aside from its functions, the weight of the flywheel in cars can be customized to modify the engine’s performance for specific purposes. The custom engine builders usually adjust the flywheel’s weight to get the desired output.

For people who want engines that can run at high speeds, or want something that can be used for racing, a lighter flywheel will be the best option. It is known to have a better acceleration at speed. However, this can result in a difficulty to keep the engine idling smoothly and accelerate from a dead stop. It is for this reason why racers need help from their pit crews to start their cars by pushing them.

Flywheel in Cars: What are the Signs of a Bad Flywheel?

Like mentioned earlier, the flywheel in cars is built to be strong so it will not warp or bend. However, just like any other car parts, it does not last forever. Over time, it can suffer wear and tear. If the flywheel in cars becomes damaged or worn out, it can trigger some symptoms that can alert you that there is something wrong with it.

If you notice any of these symptoms, it is advised that you act on it immediately and not ignore it since it can affect the overall drivability of your car. The most common symptoms of a bad flywheel includes:

Slipping gear usually happens when you increase your gears such as putting it from second gear into the third gear. You will know that your gears have slipped when you shift to a new gear and notice that the engine speed or RPM increases at a much faster rate than the ground speed. You see your engine rev but it did not change gear and there is no acceleration. It could mean that the car has slipped back to the gear you tried to change from.

If this continues to happen whenever you change gears, it can affect the car’s drivability and can cause damage to your clutch. However, gears slipping can also be a sign of a clutch issue. You can have it checked by a professional to determine the problem or look for other signs of a bad flywheel in cars.

If you step on your clutch pedal, you should feel it push down smoothly as you depress it. If you feel that your clutch is experiencing a lot of vibrations, it can be an indication of a bad flywheel. You can feel it the moment you step on the clutch or when you press down the clutch. The vibrations can get worse that you may feel them on the car’s floor and not just from the clutch pedal.

There are instances where instead of experiencing slipping gears, you won’t be able to shift gears at all. When this happens, it is a sign that your flywheel is failing and that the other components of your car’s transmission might also be damaged. If you encounter this problem, have it checked and repaired by a professional right away since if you can’t change gears, you won’t be able to drive your car.

If you notice that there is a burning smell inside your car cabin, which is prominent when you shift in or out of gears, it can be an indication that there is something wrong with your flywheel or clutch. You will be able to smell this burning odor when you roll your windows down or when you pull over and open your hood.

Since the flywheel in cars can help start the engine, a faulty one can cause difficulty in starting it.  This can happen when the teeth on the flywheel  are damaged. This makes it difficult for the flywheel to engage with the starter motor which can result in a car not starting at all.

If you release your clutch to switch gears, instead of shifting smoothly, you may feel vibrations or stuttering. It is known as clutch chattering. When this happens, you might feel that while you switch gears, your car will stall. It will really stall in some cases.

Clutch chattering usually happens when you start to drive from a complete stop, like when you stopped at a red light. But it can also happen whenever you switch gears.

This problem can happen if you just had a flywheel, clutch, or a pressure plate replacement. If the flywheel installed is not balanced, it can cause the entire powertrain to vibrate when the clutch is engaged.

If you just had those components replaced, you need to check if all the bolts are torqued to spec. If the factory service manual calls for a thread lock, ensure that it is applied too. When the flywheel in cars has gotten loose while driving, it can be very dangerous since it stores an enormous amount of energy.

Can a Flywheel Break?

The flywheel in cars is very important since it is the one that gets the car’s energy back when it needs to start up again. It works by resisting the changes in rotational speed by storing energy with the amount corresponding to the square of its revolving speed. It can be used to provide additional power when the engine can’t create enough.

However, the flywheel in cars can become damaged over time. It can break and here are some of the reasons why it does.

Small objects like gravel or other debris can fly up from the road while you are driving. These small objects can get caught in its gears that can cause damage when you try to start the car.

A damaged flywheel can have cracks on the surface caused by the excessive heat. When a flywheel is damaged due to extreme heat, it may have a bluish color and may have smears of metal on the surface.

Driving a car with a failing clutch can cause damages to the flywheel. It is because it will cause excessive heat or metal on metal wear. Worn down clutches need to be replaced as soon as possible since it can damage the flywheel in cars.

If the starter has just been replaced, make sure that it is installed properly. Poor installation can lead to a number of problems. Check your starter system and look for any signs of issues.

When oil finds its way into the flywheel, it can cause a lot of problems such as gears slipping. The oil might be coming from a leaking transmission front input shaft seal or a leaking rear main crankshaft seal.

The flywheel in cars is an important component since it stores a large amount of kinetic energy that can be used when you rev your engine to speed up or when you are starting up your car. Although it is made to be durable, it can still go bad and when this happens, you need to make sure that you have it repaired as soon as possible.