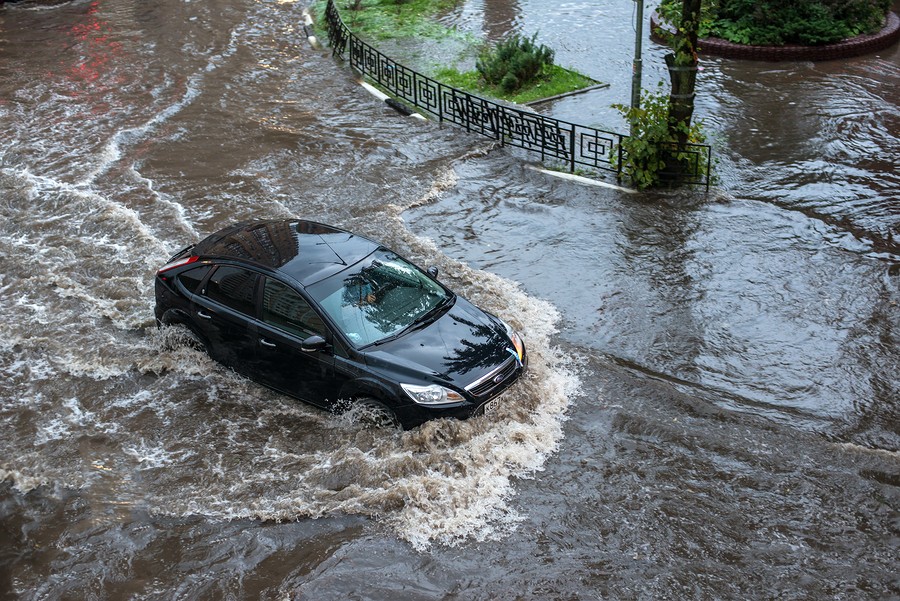 Did you know that flooding is widely recognized as the most common natural disaster in the entire world? About 40% of the natural disasters that take place each year are floods. Floods cause hundreds of deaths all across the U.S. on an annual basis, and they also do millions of dollars worth of damage to vehicles. Ask anyone who has ever owned a car damaged by flooding and they’ll tell you all about the flooded car repair cost that comes along with your car going through a flood.

Was your car recently damaged during a flood in your city? Or was your car recently damaged by water that came from something other than a flood? Either way, you should know which steps that you should take next with your car. You should also be familiar with the flooded car repair cost and be prepared to take it on if you plan on keeping your flood-damaged vehicle. Here is just about everything you need to know about flooded cars and the flooded car repair cost.

What Is a Flooded Car?

In a few minutes, we’re going to talk at length about the flooded car repair cost and whether or not it’s going to prove to be worth it to you. But before we do that, we want to make sure that you know what we’re talking about when we’re discussing flooded cars.

Flooded cars are, as their name would suggest, cars that have been through some kind of flooding. That flooding can come in many different forms (which we’ll discuss in a second). But generally speaking, a flooded car is any car that has taken on water at any point. In some cases, the water might have made it up just high enough to get inside the car. In others, it may have completely submerged the car underwater.

But regardless of how much water was able to impact the car, a flooded car is one that has been damaged in some way by water. The severity of the damage depends on the circumstances surrounding the flooding, and it could have an effect on the flooded car repair cost in the end.

What Are Some of the Things That Can Cause a Flooded Car?

Now that you know what we’re talking about when we say that a car is “flooded,” let’s touch on some of the different things that can cause a flooded car in the first place. There are actually quite a few things that could lead to your car sustaining water damage, either on the interior of your car or under the hood of your car.

Your car is obviously built to weather bad storms as long as you keep the top up on it and put your windows up when it’s raining.You can even get away with driving through big puddles and some high waters. But you should try not to put your car into a position where it’s going to have to take too much water on at once. It’ll almost always lead to water damage and force you to endure the high flooded car repair cost.

What Issues Will a Flood-Damaged Car Have?

If your car is ever damaged during a flood or another incident, there are all kinds of things that might be wrong with it afterwards. Part of the reason why people worry about the flooded car repair cost is because there is so much that can go wrong when water gets inside a car.

Let’s begin by discussing some of the more obvious issues that a car will have after taking on water. For starters, water can do damage to the interior of a car, especially if it has a lot of cloth and carpeting in it. These things can get wet and start to grow mold and mildew almost immediately. You’ll need to replace just about everything inside your car if flood water ever comes into contact with it. You’ll also need to replace a lot of the electrical components in your car. There is a ton of hidden damage that’s usually done to the electrical components of a car when it floods.

And those things are often just the beginning. If water manages to make it all the way up to your car’s engine, it could potentially be catastrophic. Water can seep into an engine through a car’s air intake and cause the engine to “hydrolock.” When this happens, it’s almost always going to lead to you having to get your hands on a new car. It’s not going to be worth fixing a hydrolocked engine in most instances.

What Should You Do With a Flood-Damaged Car?

In the event that your car floods, it’s going to be very important for you to spring into action and do the right things to prevent further damage from being done to it. One wrong move could result in you inadvertently damaging your car beyond repair. Here are the steps you should take once you realize that you have a flood-damaged car on your hands:

Under no circumstances should you keep driving a flooded car around. Even if you’re able to get it to start up and even if it doesn’t seem like it’s been damaged, there could be issues with it that just haven’t reared their ugly heads yet. It would be a real shame if you continued driving your car and ended up doing damage that could have been prevented.

Will Your Auto Insurance Cover the Flooded Car Repair Cost?

One of the other things you should do after your car sustains water damage is touch base with your auto insurance company to see if the flood damage done to it is covered. Depending on what kind of car insurance policy you have, the damage could very well be covered by your insurance company. They’ll be able to tell you whether or not you have coverage when you call them on the phone to make a claim.

Your auto insurance company will also be able to tell you whether or not they’re going to pay to have your car fixed after checking it out. Oftentimes, car insurance companies will automatically total cars that have endured flood damage. They do this because there are so many hidden issues with these cars that could pop up later on and cost them a fortune. So they usually prefer to total flood-damaged vehicles as opposed to trying to have them repaired.

Can You Repair a Flood-Damaged Car?

Your auto insurance company might not be able to help you repair a flood-damaged car, either because your insurance policy doesn’t cover it or because they’re not willing to foot the bill to fix a car that might not be worth the trouble. But if they’re not open to helping you out, you should know that you usually can repair a flood-damaged car on your own.

It’s not always easy to do flooded car repairs. There are so many little things that could potentially be wrong with a car that has taken on water. But there are some common repairs that a mechanic will look to make when fixing a car damaged by floodwater. These repairs include things like:

It’ll be up to you to decide which of these flooded car repair costs are worth it and which aren’t. It’s all going to depend on everything from the value of your car to the specific repairs that are going to need to be made to bring it back to life.

How Much Does Flooded Car Repair Cost?

In order to determine whether or not you’re going to fix your car in the aftermath of a flood, you’re going to need to keep the flooded car repair cost at the forefront of your mind. This cost could range based on what issues your flood-damaged car has. There are some flooded car repair costs that will be more than manageable and others you won’t even want to consider.

Let’s say, for example, that your car sustained little more than some damage to the upholstery during a bad storm. You might be able to remove water stains from your upholstery on your own for just $20. You might also be able to reupholster your car’s seats for just a few hundred dollars and be on your way.

But let’s say that you didn’t get so lucky during a flood and you now have a hydrolocked engine in your flood-damaged car. That’s going to cost way more than just a few hundred bucks. In fact, you might spend anywhere from $3,000 to $8,000 to fix this problem. And it’s a pretty complicated repair, which means you could also be without your car for an extended period of time.

Is It Worth Repairing a Flood-Damaged Car?

As you can see, the flooded car repair cost that you’ll face when your car floods can vary quite a bit. You can pay anywhere from $20 to $8,000 to fix your car, if not more. That will leave you asking: “Is it worth it?” The answer is, well, it all depends.

When you’re trying to answer this question, there are many factors that you’ll want to consider. They include:

If you have a car that you love that only sustained minimal damage during a flood, fixing it and keeping it would probably be a great option. But if you have a car that was falling apart before a flood that has now been damaged by water, you’d likely be better off getting rid of it rather than fixing it.

What Can You Do With a Flood-Damaged Car If You Don’t Repair It?

If you decide that you’re not going to take on the flooded car repair cost and fix your car, there are a few things that you can do with it. You can try to sell it to a private buyer, provided you disclose that it sustained water damage. You can also try to trade it in when purchasing a new car, though a dealership might be apprehensive about accepting it from you.

But your best option might be to reach out to the junk car buyers at Cash Cars Buyer so that you can ask us to buy your car from you. Despite the water damage that was done to it, we’ll purchase your car from you and make sure you get top dollar for it. Even if you have a hydrolocked engine that is in desperate need of repair, it won’t scare us off one bit. We can make you a respectable offer for your car and handle picking it up from you at your earliest convenience. Contact us to find out how easy we make it to sell a flood-damaged car.