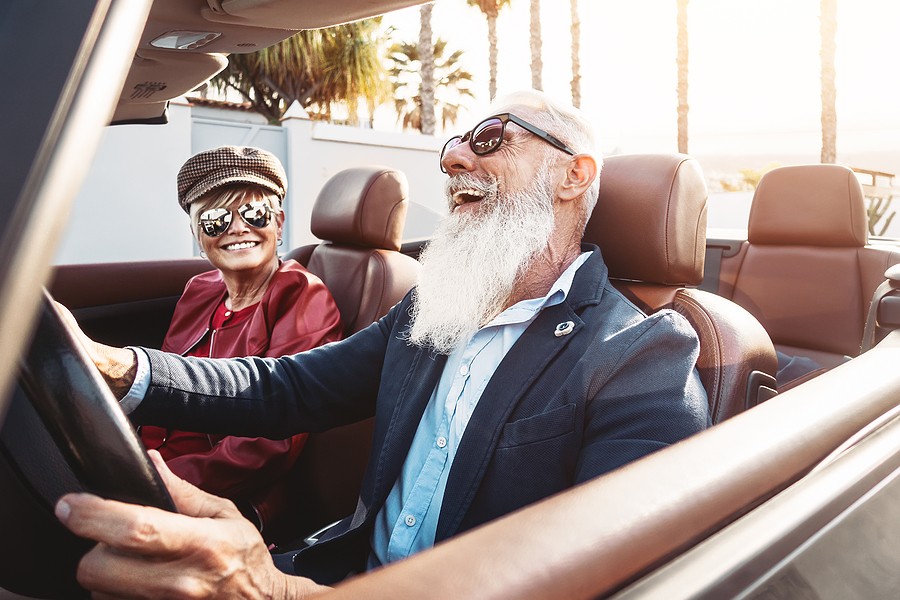 If you’re in the market for a daily driver, a new ride for the family, or that first car every kid dreams of but restrained at a $15,000 budget, you find a lot of options in the used car market. There are a lot of top-notch vehicles from hatchback to SUVs, you just have to know where to look at and what to look for. Listed below are five of the best-used vehicles for 2020, one in each category of hatchbacks, mid-size sedans, full-size sedans, minivans, and SUVs.

When gearhead and you hear the term “hot hatch” one car immediately, VW’s Golf GTI, the MK1 came out in 1974 as a replacement to the ever-reliable love bug, the VW Beetle. The golf was an instant hit and though it wasn’t really the first hot hatch it practically popularized the term for performance hatchbacks. The seventh-generation (MK7) still upholds that idea, powered by a 2.0 L turbocharged four-cylinder engine that outputs 207 hp with the optional performance upgrade, you can boost that to around 218 hp.

Though not visible on the outside, the sports breeding of the GTI will be obvious once you’re behind the wheel, with its adaptive and adjustable suspension, your everyday commute will be smooth and comfortable as it is quick and aggressive when needed, like say a day on the track, maybe?

The GTI comes standard with an intuitive infotainment system that comes with a 5.6-inch touchscreen with 3D satellite navigation and a USB port which are all linked to an audio system with eight speakers all around the cabin. Other features include rain-sensing wipers, tire-pressure warning, electric park brake, power locks, dual-zone climate control, cruise control, and parking assist with parking sensors and reversing cameras found beneath the hatch release and is easily accessible when needed.

For safety the GTI is equipped with seven airbags, stability control, cruise control, and VW’s XDL, an extended electronic front differential lock system that helps you manage those tight corners by applying brakes to the inside wheel or sending more power to the front wheel with more grip, up to 100 percent, effectively applying torque-vectoring, to prevent the car from spinning and keeping you on the road. On top of that, you have the ability to adjust steering inputs to match your driving style, effectively making the GTI’s already amazing cornering abilities more impressive.

If you’re lucky enough to find a Performance model of the GTI, grab on to it because that little monsters get you an additional 9hp and can go from 0-100 kmph in a little above 6 seconds and can go as fast as 248 kmph, but don’t fret, whipping off that speed is easy with its ventilated disk brakes for the front and rear. And managing all that power will be easy with the above mentioned adaptive and adjustable dampers.

One of the most fun cars to drive out there, with the option for a five-door or three-door (which is ideal because it just looks way cooler) hatch you can easily find a used GTI below $15,000 due to depreciation but if you still want one with a lower price tag, you can check out an MK6 the ranges around $11,000.

An instant hit when it first came out in 2003, the Mazda 3 has redefined what a mid-size sedan should represent and the third generation has just gotten even better. Being one of the first three Mazda cars to receive the KODO: Soul of Motion design philosophy treatment, this version of the 3 looks like it is going at high speeds even if it is standing still.

That design philosophy is matched by its impressive interior. The Mazda 3 cabin layout is logically designed to promote ease of use of the high-quality panels, interfaces, and switches. At the center of the dashboard is the interface for its infotainment system, a 7-inch touchscreen display, the system, equipped with satellite radio, and Bluetooth connectivity can also be controlled by a center console knob or the steering wheel-mounted controls.

Other features included in the 3 that makes it stand out from other mid-size sedans are a color head-up display (HUD), adaptive cruise control, adaptive LED headlights, and leather upholstery, with front seats that are great for long drives but can still hold you in place during those time you feel like opening up the throttle, which you’ll no doubt be tempted to do.

The 3 is powered by either a base 2.0 L inline-four engine the make 155 hp and 150 lb-ft of torque, if you want more power and responsiveness, look for one with the 2.5 L inline-four that can produce 184 hp and 185 lb-ft of torque which give you power at lower rev ranges compared to the 2.0 L that only produce its max power around the 4000 rev range. To help you manage all that power, Mazda has equipped the 3 with its G-Vectoring Control that manages the torque between the front wheels based on your steering input, making it more grounded when cornering or on high-speed highways.

No doubt one of the most popular cars largely due to its reliability, the Accord doesn’t depreciate as quickly as others of its class, so going as far back to a 2012 model is your best chance of getting one below $15,000. No one makes a great product by getting to know its audience than Honda, and this is obvious on the 2012 Accord by delivering quality and performance that none of the other’s in the segment can match like a spacious cabin with plenty of room for your family and a fuel-saving four-cylinder engine that rates 34 miles per gallon on the highway.

Another thing the Accord is famous for is its luxurious interior, adorned with user-friendly controls for navigating the Infotainment with Honda’s Satellite Navigations system, XM Radio, and Bluetooth connectivity linked to a premium 270-watt audio system.

When it comes to safety, the Accord is far from lacking, with a perfect 5-star rating from the National Highway Traffic Safety Administration for frontal crash safety, rollover resistance, and side crash safety. It comes standard with dual front airbags, front-side airbags, and side curtain airbags plus active head restraints for the driver and front passenger. Other safety features include Honda’s Stability Assist stability and traction control system, three braking aids, electronic brake distribution (EBD), braking assist (BA), anti-lock braking system (ABS), 3-point seatbelts for all passengers, seat belt reminder for the driver and front passenger and an emergency trunk release.

If you’re looking for a used compact SUV, look no further than the 2015 Ford Escape, fun to drive while still giving you a smooth ride, a spacious cabin with an ample amount of cargo space, great reliability and fuel efficiency for its class, it sure is an all well-rounded option for something below $15,000.

Inside the Escape is filled with high-quality materials and a long list of impressive features that come standard, such as an iPod interface, Ford’s Sync voice control system, and rearview camera. You can also opt for the MyFord Touch electronic interface that makes the interior look even more expensive than it really is.

The Escape is based on the same platform as its famous baby sister, the Focus, getting the same versatility, athletic demeanor, and solid quality build.

The third engine option is a 2.5-liter inline-four that can produce 168 hp and 170 lb-ft of torque which can achieve a 22 mpg city and 31 mph highway driving.

As direct competition to the Honda Odyssey, the 2011 Sienna was completely redesigned by Toyota, adding extra features, a roomier interior, a better-styled exterior, an improved driving feel, a new engine option, and an all-wheel-drive variant that no other minivan in the market offers. For units with mileage below 100,000 miles, you’ll probably find one that’s around $15,000, if you get one with higher mileage you’ll probably only need to pay around $10,000.

Despite the crossover SUV class taking over the family vehicle market, the Sienna still stays as a strong option for most people, with its boxy shape which is perfect for maximum passenger and cargo capacity. Plus with its dual sliding doors and the huge rear hatch makes packing those passengers and cargo very easy. This minivan is easily the best function-over-form vehicle in the market.

Almost identical to it previous reiteration, the 2011 model still seats seven to eight passengers, but now it boasts a new four-cylinder engine coupled to an equally new six-speed automatic transmission, plus additional features in the inside like optional recliner seats for the second row and a new addition to the rear entertainment system, a split-screen video monitor.

The new 2.7 L inline-four engine which puts out 187 hp is geared towards fuel economy which rates 19 miles per gallon city driving and 26 mpg on the highway and comes standard with the base and LE trims while the 3.5 L V6 gives you the power that you need at 266hp and is standard for higher trims. Both are coupled with a six-speed automatic transmission. For the top tier trim, Sienna SE, you get a few styling tweaks like a large lower grille and lower side skirts, and to complete the sports feel, it also comes equipped with a sport-tuned suspension. Whichever trim you go for, though, you still get the easy riding, smooth quiet ride, and comfortable seating with a huge amount of cargo space and a long list of family-oriented features that the Sienna is known for.

The best way to know which car is best for you is to first know what you need (or want) it for. If you’re on the young side with no patriarchal or matriarchal responsibilities, I’d definitely suggest the Golf GTI or the Mazda 3, both are practical for daily commutes or city driving but still gives you the fun and aggressiveness young people seek in driving. If you want something a little more mature, the Accord and Escape is great for you, they’re both very practical, and can be used for daily driving or a family vehicle and can even be used to haul a relative amount of cargo, even more on the Escape which can haul a small trailer. Now if you are a mom or dad and need a vehicle where you can pack the whole family in, the Sienna is a no brainer of a choice, even with the sportier SE trim, it's spacious and family-friendly and is perfect for times you want everyone in one car. There are a lot more options out there, just don’t be afraid (or lazy) to look around, the ones mentioned above are just what we think is the best option you have out there, you can use them as guidelines when looking for the perfect vehicle for you. Just remember to inspect the vehicle, if you’re not familiar with the auto mechanics, it is best to bring someone with you who does or at least have someone you can call. And always test drive the vehicle before purchasing, hesitation or refusal for a test drive from the seller is a sure sign of a defective unit, so walk away immediately no matter who tempting the vehicle is. One last advice before you hunt your new (to you) ride, enjoy the process, that the best way to find the right car for you!