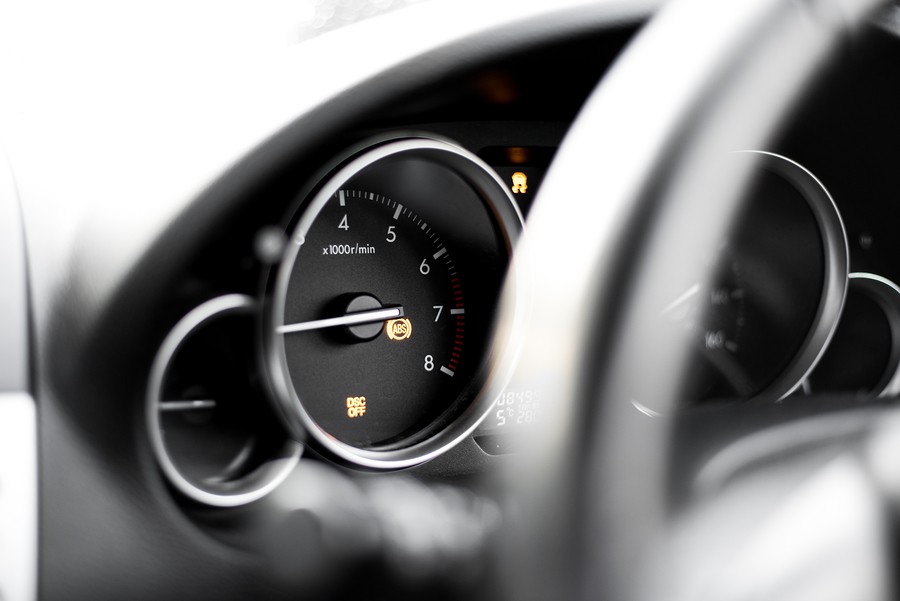 Imagine this: You’re driving down the road one day when you see a warning light pop up on your dashboard. But it’s not your check engine light, your oil light, your engine coolant light, or even your tire pressure light. Instead, it’s a light featuring a car with two squiggly lines underneath it. What in the world is it? This is called an ESP light, and it’s very important for car owners to know what ESP lights mean, why they might appear, and what they should do when they see them. People should not ignore ESP lights when they show up, especially when they turn on and don’t turn back off. Continue reading to find out more about ESP lights.

ESP stands for an electronic stability program. It’s also commonly called electronic stability control (ESC) or dynamic stability control (DSC), and it’s a safety feature that’s included in all modern-day cars. ESP is designed to help people maintain control of their vehicles when they’re driving over any kind of slippery surfaces. If you happen to start sliding around on the road while you’re driving down it, your ESP will kick into high gear and help you regain control of your car. There are some instances in which it might play a very important role in helping you avoid getting into accidents.

If you don’t have a car that has ESP right now, you may want to consider changing that sooner than later by selling your old car and buying a new one. Many older cars aren’t equipped with safety features like ESP, and it can put drivers at an increased risk of being involved in accidents. It can also put them into potentially scary situations when they’re out on the road since they won’t be able to rely on their vehicles to help them out when they’re driving over slippery surfaces.

How Does ESP Work?

Now that you have a general understanding of what ESP is, let’s get a little bit more specific and discuss how it works. It is, after all, one of the most important systems in your entire vehicle since it plays such a crucial role in your safety. It’s good for you to have some idea of how it’ll work to keep you, your fellow passengers, and other drivers safe, even when you might not notice it working.

Your ESP is essentially a microcomputer that is always working and using sensors to keep an eye on a number of different things inside your car. Your car’s ESP will check on each of its sensors about 25 times per second to see if you’re having a hard time steering your car. It monitors everything from the way you’re turning your steering wheel to which direction your tires are moving in to determine whether or not you might be in trouble. If it finds that you might be having a tough time driving your car in the direction you want it to go in due to traction issues, it’ll spring into action in an effort to help you correct the problem. Your ESP won’t take complete control of your car, but it will make small adjustments to your car to help guide you in the right direction.

Do All Vehicles Have ESP?

As we mentioned a moment ago, all cars do not have ESP. You’ll find some older cars that were manufactured long before ESP became standard. But most of the cars out on the road today do have ESP, even if it’s called by a different name since it’s mandatory for cars made after 2012 to have ESP in the U.S. These days, many car manufacturers have started to rebrand ESP to make it look like it’s a feature that’s unique to them. Volvo, for example, calls their ESP system Dynamic Stability & Traction Control (DTSC), while Porsche refers to their ESP system as Porsche Stability Management (ESC). But no matter what name it goes by, ESP operates in the same basic way in all cars.

What Is an ESP Light?

At this point, you know just about everything there is to know about ESP and how it works, at least on a basic level. But we haven’t yet answered the question that we posed way back at the beginning: What is an ESP light? It’s going to be important for you to know this since those who own cars are going to see their ESP lights flash on their dashboards at least every so often.

ESP lights are, as we talked about a little while ago, lights that feature a car with two squiggly lines underneath of them. Those lines are meant to represent the skid marks that a car leaves behind when a driver is moving around all over the place on the road and trying to regain control of their car. You should keep an eye out for the ESP light at all times when you’re behind the wheel of a car, especially when you’re driving on a slippery surface.

What Does an ESP Light Mean?

When you see a light pop up on your dashboard—any light at all—it’s usually a cause for concern. So if you’re slipping and sliding around on the road and you suddenly see your ESP light come on, you might think it means that there is something wrong with your car. But more often than not, this is not the case.

If you see your ESP light come on and you’re on a slippery surface, it usually just means that your ESP is working the way it’s supposed to. The ESP light is designed to let you know that your ESP system is working to try and keep you safe while you’re making your way over a road covered with rain, ice, or something else that’s making it slippery. With this in mind, you don’t necessarily need to start freaking out if you see your ESP light come on for a few seconds or even a few minutes at a time before shutting back off.

Should You Be Worried About an ESP Light?

Most of the time, you’re not going to need to be too worried about your car’s ESP light coming on and staying on for a little while at a time. You should actually feel a sense of relief when this happens since it’ll indicate that your car is trying to do its best to keep you safe. However, you should be at least slightly concerned if your ESP light lights up on your dashboard when you’re not driving over a slippery surface. You should also be concerned if it lights up and stays on for an extended period of time. It could mean that you have a problem on your hands that will need to be addressed right away.

What Causes an ESP Light to Stay On?

If your ESP light stays on for longer than just a few minutes, you shouldn’t ignore it. There is something that is causing it to stay on, and you’re going to need to find out what it is and repair it to ensure your ESP is working the way it should. First and foremost, you should check to see if you may have accidentally shut your ESP off yourself and turned your ESP light on in the process by pressing the ESP button in your car. Many cars give you the option to turn ESP off if you choose to do it for one reason or another. By simply pressing the “ESP OFF” button again, you can shut your ESP light off and turn your ESP back on.

If, however, you didn’t touch the “ESP OFF” button in your car and your ESP light is on, there could be something else that’s causing it. It’s not always easy to diagnose the problem that’s causing your ESP light to stay on, but you’ll need to do some digging to see why it won’t turn off. You can usually find out why an ESP light won’t turn off by using an OBD2 scanner to check your car for error codes. Here are some of the most common reasons for it:

And this is just the beginning. The truth is that there are many different car parts that can cause your ESP light to come on and stay on. You’ll usually need to have a mechanic take a closer look at your car when the ESP light is on to examine it for signs of trouble.

How Can You Get an ESP Light to Turn Off?

How Much Does It Cost to Make ESP Repairs?

Despite the fact that they’ll see their ESP light staring back at them each and every time that they climb behind the wheel of their car, there are some people who will put off making ESP repairs. Reason being, they’re afraid of how much it might cost them to make repairs since there are so many potential problems that could be affecting their car. And unfortunately, their fears are often confirmed when they eventually get their cars fixed and receive their auto repair bills back from their mechanics.

There are some ESP-related repairs that won’t cost an arm and a leg. But there are also others that will set car owners back a pretty penny. Check out how much money some people will have to pay to make the repairs that are necessary to turn off their ESP lights:

As you can see, the cost to turn ESP lights off can be anywhere from around $100 all the way up to about $1,000, if not more. It’s what makes some people ignore their ESP lights for longer than they should.

Is It Dangerous to Drive With an ESP Light On?

If your ESP light turns on and you don’t do anything about it, you might get lucky and not put yourself into any dangerous situations. But one study after another has shown that car owners are able to make themselves safer by driving in vehicles with fully-functioning ESP. In fact, some studies have suggested that ESP might be able to single-handedly stop about 80% of all car crashes that involve skidding. You could put yourself and others at risk by driving around with your ESP light turned on and your ESP not working the way it’s intended to work.

Is It Worth Fixing Cars With ESP Lights On?

Has the ESP light in your car turned on and stayed on in recent days? Even after hearing everything we just said about how much safer you’ll be with ESP, you might be tempted to put off making the right repairs to your car. Your car might not be worth enough to justify the costly repairs that need to be made to it. If this is the case, you should consider selling your car for cash rather than putting up a bunch of money to fix it. Cash Cars Buyer can set you up with an offer for your car and give you cash for it so that you can put your ESP problems in the rear-view mirror.

Are you interested in selling your car for cash so that you can buy something with a functioning ESP that will make it so much safer than your current vehicle? Give us a call today to find out how to sell your car to us as is so that you don’t have to worry about seeing ESP lights all the time anymore.