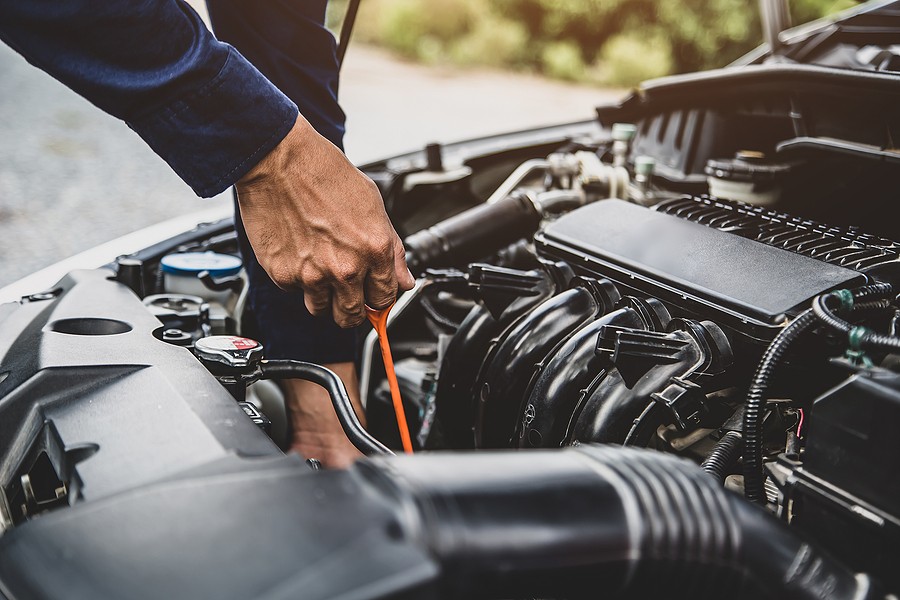 Engine knocking is more common in older vehicles. People notice a banging sound coming from the car. Switching to higher-octane fuel may cut the problem short if it’s an air/fuel mixture issue. If not, a serious $6000 engine rebuild may be necessary.

With summer quickly approaching, families are preparing for cross-country road trips. While it seems obvious to check that the car has a spare tire before embarking on the journey, it is also important to ensure that the vehicle’s engine isn’t making a thud-sound or “knocking.”

To put it simply, the engine is the heart of the car. Instead of pumping blood, the engine pumps air and fuel to keep a vehicle rolling. An engine is built to efficiently use burning gas to transform heat into force to turn the car’s wheels.

Engine knocking occurs when fuel burns unevenly rather than with a uniform burst (due to the air-fuel mixture being incorrect).

Luckily, engine knocking is less common in modern cars because the timing of the engine being controlled by a computer. Driving an old car has its benefits, but avoiding a knocking engine isn’t one of them.

If you have a totally classic Volkswagen Van packed and ready to go for that road trip to Nevada, keep on reading.

In this article, we’ll take a look at the most common causes of engine knocking, how to notice the signs, what solutions you can take and what solutions offer the most “bang” for their buck.

Engine knocking occurs in older vehicles when the air and fuel mixtures in the engine are out of whack.

For those who drive an older vehicle, it is important to pay close attention to what is happening under the hood at all times.

Knowing the possible causes of engine knocking can help you fix the problem easily and potentially even prevent the problem from ever happening. The repair bill might be less than $100 or over $5000.

The first cause of engine knocking is fairly simple; the vehicle owner may just need to pull a different nozzle the next time they fill up the car at the gas station.

As the cylinders take in air and fuel, a random ignition might occur, without the help of the spark plug. This is what causes engine knocking. The two ignitions collide, causing the knocking sound.

To avoid the problem, the fuel might need to burn at a higher temperature. This is where the octane rating enters the picture. The lowest, 87, burns at a lower temperature. To up the ante, it’s important to use mid or premium, 89 or 93 respectively.

If the fuel change resolves the problem, you could be in luck. Sure, the gasoline costs more, but it’s not as bad as a $5000 to $6000 engine rebuild.

If you’re not sure what to do, consider visiting a mechanic for guidance.

Engine knocking can be caused by bad spark plugs.

Vehicles use spark plugs to start up. The electrical spark ignites the fuel to get the motor going.

Unlike other car parts, they do go bad over time and do not always make it for the entire duration of the car’s lifetime.

If the spark plugs are old, that can cause engine knocking.

Replacing them is tough because if you don’t do the job right, engine knocking could result. For this reason, it is crucial that the right spark plugs be inserted into the engine and that they are properly adjusted afterwards.

Depending on the car, and the garage, changing the spark plugs could be as low as $50 and as high as $250.

Bad Engine Timing could be to Blame for Engine Knocking

Engine knocking often is the result of bad engine timing. In newer cars, this isn’t such an issue thanks to the digital controls that manage the engine.

Older cars don’t have this technology or it doesn’t work the way it used to. In such a case, the spark plugs start misfiring. This leads to a detonation in the cylinder (yes, that horrid knocking sound!).

Some mechanics say this problem can be repaired for about $1000, but it truly depends on the actual problem underneath the hood.

Engine knocking might occur because of a carbon buildup. There’s a lot of soot and carbon left behind as the car burns fuel. Over the course of a decade or two (or three), that’s a lot of damage to the car’s engine.

The average lifespan of a car is about twelve years. When we drive classics and retro vehicles that have twenty or thirty years on the road, or more, then it’s time to really dive deep into engine care. If not, the engine might just come knocking.

If it’s a carbon build up, then the knocking sound might begin as soon as the vehicle starts. Take the car to the mechanic to learn your options. The repair bills could be as high as $5000 if an engine rebuild is in order.

How to Avoid Engine Knocking in Old Cars

Engine knocking in old cars happens when the engine is igniting in multiple places and that reactions collide. A professional can best help you with this problem.

To avoid it, there are steps a car owner can take:

Knowing these potential causes of engine knocking can help you fix the problem on your own, or help you know when it is best to refer to a professional with the issue.

How Much is the Engine Knocking Repair?

Many people don’t worry too much about the causes and technical side of engine knocking. Rather, they just want to know how to make the problem go away.

Unlike many cut and dry car repairs, engine knocking is a tricky one. It could be many different problems, or a combination of issues at work.

For example, if it’s just that the car needs a gas upgrade at the pump, then drivers are looking at an increase of about .50 a gallon. That cost adds up overtime, especially if you have a long commute or a lengthy road trip ahead.

Other problems, like swapping out sparkplugs might only cost a few hundred dollars, but mechanics recommended being prepared to drop $1000 on the job.

Now, many drivers out there might be crunching the numbers on this problem and realizing the repair doesn’t even seem worth it.

If you’re on the fence about the problem, consult a mechanic for an estimate. This may help you determine whether the repair is a good investment.

If the car is new, this shouldn’t be a problem. Engine knocking in a newer car is a serious concern, but it might be covered under warranty or recall.

The problem of a knocking engine occurs most often in older vehicles, which brings an economic factor into the equation. Paying thousands of dollars to repair a car that isn’t even worth that amount on a used car lot doesn’t make a lot of financial sense.

Rather, it might be a better idea to scrap the car altogether. Perhaps the knocking engine is a sign that the car has reached the end of the road. All the parts of the car that are still good, though, are worth something. You can call a junkyard for an estimate; they’ll pay you to haul away the car.

With the money that’s given for the old car, new options open up: a down payment on a new car, money for ridesharing, or getting a bus pass. All of these choices may be the better route to go if your car has engine knocking and the repair isn’t worth the cost.

It certainly beats being stranded on the side of the expressway!

The knocking engine is always an uninvited guest. It means bad news is ahead.

With this problem, the gas budget is going to skyrocket or you’re going to be spending hundreds, if not thousands, on a repair, most likely for an old vehicle.

The truth is that the knocking engine could be the exit for which you’ve been waiting.

Rather than pour more time and money into the old car, consider junking it and obtaining a newer one. You will spend more on the payment and insurance, but you won’t have surprise car repair bills. That security has a lot of value.

Sometimes the road less traveled is best; when it comes to a knocking engine, though, a smooth ride sure sounds a lot nicer.