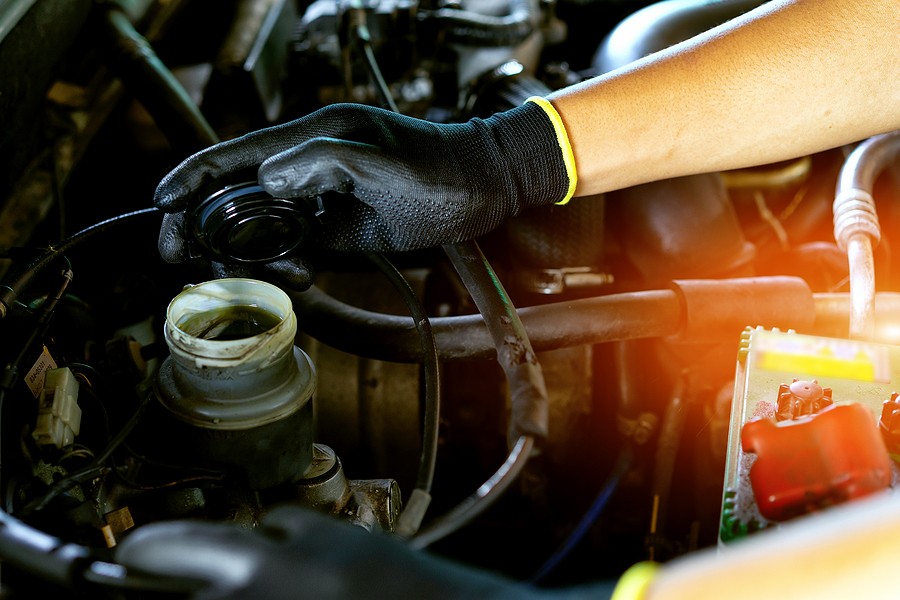 When you press the brakes and create that friction that stops your car it creates a lot of heat. Different brake fluids react to heat in different ways which is why there are different types of brake fluid available to you. These are generally differentiated by the term DOT. The letters DOT stand for Department of Transportation because it is the Department of Transportation that sets the safety standards and regulations that brake fluid has to meet. They give the brake fluid a number rating which is most often going to be known to you as an end consumer as something like DOT2, DOT3, DOT4, DOT5 or DOT5.1.

What is the Difference Between DOT2, DOT3, DOT4 and DOT5 Brake Fluid?

What are the Wet and Dry Boiling Point of Brake Fluid?

If you're new to brake fluid, the terminology of a wet boiling point and a dry boiling point may be confusing to you. When the DOT rating refers to dry boiling point it means brand new brake fluid right out of the container. Brake fluid becomes wet when it's been in the lines for a while and has managed to absorb 3.7% water by volume. It takes about two years for any DOT brake fluid to reach the point where it has absorbed that much water. At that point you are going to want to have it replaced by way of a brake fluid flush.

If you allow your brake fluid to continue absorbing water beyond 3.7% by volume, which it will do if it doesn't get changed, the boiling point will continue to decrease. After reaching about 8% by volume, the boiling temperature will only be around 100 degrees Celsius.

The lower the boiling point of your brake fluid, the less effective it will be. Boiling brake fluid creates air pockets which diminish or completely eliminate the ability of your brakes to actually stop your car from moving. If it gets bad enough, you'll find that you are unable to stop in an emergency which could lead to some serious accidents and even death. That's why knowing the DOT rating of your brake fluid is important, as well as knowing when it was changed last and when it needs to be changed again.

What is DOT 5 Brake Fluid Used For?

As we have seen, DOT 5 brake fluid has one of the highest boiling points of all the fluids available.  Typically, your car will run on either a DOT3 or a DOT4 brake fluid which are both glycol ether-based brake fluids.

DOT 5 brake fluid is a silicon-based fluid. This was developed to be used in cars where moisture was definitely going to be prevalent and unavoidable. That means things like high performance vehicles and military vehicles. It has a very high boiling point, but it also has more compressibility than the glycol ether-based fluids. Also, there are now DOT4 brake fluids that have boiling points that are actually above DOT 5 brake fluid so there aren't a lot of reasons for you to look into getting a DOT 5 fluid for your car if you don’t need it.

You can usually tell DOT5 brake fluid at a glance because it will be a purple colour unlike the other brake fluids. DOT3 is usually yellow or amber while DOT4 is light blue. DOT5.1 fluid is usually clear to amber in color.

The advantage of the silicon based DOT5 fluid is that it absorbs no moisture whatsoever, unlike the glycol-based fluids. Because it is also chemically inert it won't react with other chemicals in your braking system, nor will it even react to your car's paint which the glycol-based fluids will. For that reason,DOT5 fluid is also preferred for vintage and antique cars that don't get driven around a lot. It can be left to sit in the system arguably for the life of the car without causing any problems.

Even though, by the numbers, DOT5 looks like the best brake fluid for your car based on the boiling point, you're definitely going to need to refer to your owner's manual if you're not sure to find out what kind of fluid you need to use. Most cars do not take DOT5 brake fluid, so never assume it’s the right choice for your brake system if you don’t know for sure.

It seems like everyone should want to be using DOT 5 brake fluid since it has the highest boiling point and absorbs no moisture and won't react with everything else in your vehicle. And while that does make it seem good, there are some issues with it as well.

DOT 5 brake fluid is typically much more expensive than DOT3 or DOT4 brake fluid. It can cost up to five times as much as your standard brake fluid for a bottle. This price difference isn't huge, but it is a definite difference between the two types of fluid.

As we said, you cannot mix DOT 5 brake fluid with any other kinds of brake fluid. Because of the compressibility of silicone-based brake fluids you don't want to use them with ABS brakes anyway because they will not function as well.

Additionally, there are some brake systems that may not work with silicone brake fluids because of their chemical composition. It's possible if you have some silicone rubber external components, things like your caliper piston boots, that a DOT5 brake fluid could actually break them down.

When DOT5 brake fluid is used in an ABS system it will become foamy and unreliable. This is a result of the pulse high-pressure action that ABS brake systems exert on the brake fluid. The brakes will become spongy when you try to use them because of this as the foaming action will produce air bubbles that greatly reduces the reliability of the brake fluid. This is the main reason that you need to be 100% sure you're using the right brake fluid in your vehicle. If you have ABS brakes and you use the silicon-based fluid, you could potentially ruin the entire braking system for your vehicle. That could lead to a serious accident because your brakes are no longer able to perform the way that you need them to.

What Happens if You Mix DOT4 and DOT5 Brake Fluid?

If your car currently runs on a DOT3 brake fluid or DOT4 brake fluid, you absolutely cannot mix DOT 5 brake fluid into it. Because one is glycol ether based and the DOT5 is silicone-based they will simply not mix together. The result of adding one to lines filled with the other could be complete brake failure. The fluid will become thick and sludgy in your line and not function as required. Additionally, even if you do a full flush, if your car was not designed for DOT5 silicone-based brake fluid it could still cause some problems.

The name of this brake fluid can be very confusing as it sounds like DOT5.1 is just slightly different then DOT5 brake fluid. However, DOT5.1 brake fluid has much more in common with DOT3 brake fluid and DOT4 brake fluid. It is also a glycol-based fluid like the other two but does have a similar boiling point to the silicone base DOT5 fluid.

In general, you can probably safely mix DOT 3 brake fluid with DOT4 brake fluids or DOT5.1 brake fluids. Basically, all of the glycol-based fluids are usually interchangeable with one another. It's best to double check with the manufacturer first before mixing them however because when we say usually, we don't mean always and it's possible that they are not compatible with one another. If you wish to swap out fluids, you may need to do a full fluid flush at a time to prevent any damage to your brake system.

DOT5 brake fluid is especially good at maintaining efficacy during very high temperatures and is completely immune to water in the brake lines. This makes it an attractive choice for any driver. However, if your car is not designed to handle silicone-based brake fluids then it can cause more harm than it fixes if you add it to your system.

Just remember, check your owner's manual and if you're at all unsure about what kind of fluid you need in your vehicle or how to replace it then definitely go to a qualified mechanic or technician to get the job done for you. They can figure out exactly what kind of fluid you need and safely add it to the system. If that means doing a full system flush, then that could be the safest option. Because of the way DOT5 brake fluid reacts with the glycol-based brake fluids, you definitely want to make sure your lines are completely clean before you go from one type to another if it's an option in your vehicle.