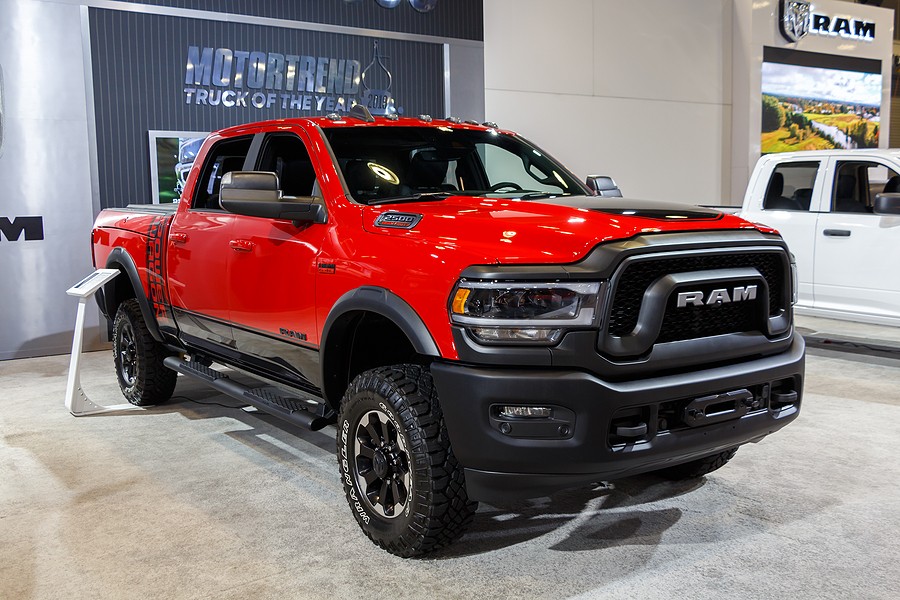 Ram pickup trucks have been in production since 1980. These days they're just known as Ram pickups, but for a time they were Dodge Ram pickup trucks as part of the Dodge family of vehicles. In the year 2010, Ram and Dodge separated, and Ram became its own brand.

Ram has been consistently one of the most reliable and popular models of pickup trucks on the market. Along with the Chevy Silverado and the Ford F-150, these vehicles dominate their segments and enjoy impressive sales numbers. In 2019 alone, Ram sold nearly three-quarters of a million units.

In 2012 the Dodge Ram 1500 became the Ram 1500. So, any vehicle you're looking at for 2011 and earlier is a Dodge, anything from 2012 is a Ram. Technically though, we're just talking about the same vehicle. The Ram logo is the same, and everyone would recognize it as basically the same truck. That's just something to keep in mind if you were looking up one vehicle online especially, as you may wonder when you're searching for the Dodge Ram how come they don't exist after the year 2011.

As popular and reliable as Ram Trucks tend to be, it would be hard to imagine any vehicle selling 750,000 models in a single year and there not being some problems. Just like any other car on the road, Ram trucks have had their fair share of issues over the years. And a few model years have really suffered in terms of how their transmission has functions.

Starting with ram, made from 2012 until the present, let's take a look at which model years have had some serious transmission problems that you might want to avoid.

In terms of transmission, these were the most problematic years that the Ram 1500 experienced. Keep in mind, that these were just transmission issues and the vehicles may have had other problems overall. The 2014 Ram for instance was known to have several problems in addition to the transmission.

The 2014 Ram 1500 pickup was the worst year overall for transmission issues since they dropped the Dodge name. The most common issue that drivers experience was a bump in the transmission when releasing the brake or accelerating. On average drivers experienced this happening under 14,000 miles, and the cost to repair it was about $750. Some drivers had to replace the driveshaft or needed to update software. And others were told at the dealer that they couldn't replicate the issue so there was nothing they could do about it.

Another common concern for some drivers of the 2014 Ram was that the engine would rev but they seemed to not be able to get any acceleration. This tended to happen around 30,000 miles. For several drivers this actually happened while they were out on the open highway. The check engine light would come on, and the vehicle would no longer be able to accelerate. As you can imagine that would be pretty scary if you're in fast-moving traffic and suddenly you lose the ability to keep pace.

Equally as problematic for drivers was the fact that for many of them the transmission would not downshift properly. This again happened at around 35,000 miles. the transmission would routinely slip, or the same issues with reading and no acceleration Whitaker, and Switching gears became impossible for some. for others, it was simply a hard shift from one gear to another as though the truck was resisting.

A less common problem but still dangerous was the tendency for the Ram to shift out of drive while you were in the middle of driving. At least one driver reported this happening while they were driving on a wet road at 65 miles per hour. They lost control of their vehicle and spun out on the side of the road, thankfully not getting into an accident.

For others, the issue was a little more manageable but meant that any time they stopped at a sign or light the vehicle would not work properly until they shifted into park and then back into drive every time.

The 2014 Ram 1500 was also under several recalls, including one that affected just over 1.4 million vehicles. This was an issue related to the vehicle rolling away because you're able to shift the transmission without pushing the brake pedal or without the key in the ignition.

The 2015 Ram 1500 did not have quite as many transmission issues as the previous year's model had, but it was still saddled with a few. The biggest issue that drivers complained about was hard shifting occurring at around 27,000 miles. Drivers experienced difficulty downshifting from 2nd gear to 1st with such force that at least one driver thought someone had actually rear-ended them because of how hard the vehicle jerked.

The hard shifting issue was not one that was easy to replicate because it didn't have it every time, so some drivers were not able to get it serviced properly because when they took it to a shop or the dealer or the mechanic was not able to replicate the problem.

Noises and general shifting problems rounded out the issues with the 2015 Ram 1500 model year for most drivers.

2012 had fewer issues than the previous years that we've covered, but it was still problematic for many drivers. Jerking transmission was the most common complaint happening around 8,000 miles.

Fiat Chrysler, the makers of the Ram line of pickups, issued a recall for just over 64,000 2019 and 2020 Ram 2500 pickup trucks, as well as 19,000 Ram 3500 trucks that were equipped with the 68rfe automatic transmission. The recall is due to a risk of fire caused by a potential transmission fluid leak. Apparently with this particular transmission there was a risk of transmission fluid expelling from the dipstick tube which could come in contact with the turbocharger or something else in the engine compartment. The recall started for the beginning of the 2019 production year which happened back in October of 2018 and extended all the way to January 2020 when Fiat-Chrysler stopped producing these particular transmissions.

Several fires were started as a result of this technical problem which did lead to injury but no fatality, thankfully. They chose to do a voluntary safety recall on the affected vehicles to fix the problem. The recall was rolled out in March of 2020.

Ram issued the recall for close to 1.5 million trucks because of a faulty Interlock in the transmission back in 2018. The interlock malfunction could have caused the truck to shift out of park without applying the brake pedal or the key in the ignition, as we mentioned earlier. This one affected not the 1500 line but various 2500, 3500, 4500, and 5500 heavy duty Ram models. The years range from 2010 all the way up to 2017. The recall affected only trucks equipped with a steering column mounted shifter and any 2017 models built after the end of 2016 we're not included.

As part of the recall, Ram advised drivers to always use their parking brake and also to never leave children or pets unattended in a vehicle just in case it did roll away.

Going back to 2011 and earlier, the ram becomes the Dodge Ram. These are still popular models of vehicles, and fairly easy to find if you were looking for an older used truck. As you can imagine, with the sales numbers Dodge has put up, there are still many of these early models on the road.

The 2001 Dodge Ram 1500 was hands-down the worst model year for the Ram’s transmission. On CarComplaints.com, they list this model year as a clunker that you really should avoid. While there were a number of other issues, the transmission was a standout problem for this particular model year. Numerous drivers reported total transmission failure at about 92,000 miles on average. The cost of repairing this was around $2,000.

For most people experiencing transmission failure in the 2001 Dodge Ram, a total transmission rebuild was required to fix the issue. Many drivers had to deal with replacing the transmission more than once. Sometimes as much as three and four times. And that was just one of the issues that needed to be dealt with, as they were electrical issues at engine issues with the same model year.

A number of drivers also experienced problems with heavily fluctuating RPMs, and transmission that continued to shift in and out of gear for no apparent reason. The transmission for some worked perfectly fine in reverse, or first gear, but then trying to get into any higher gear proved extremely difficult if not impossible.

For other drivers, reverse was not possible to achieve effectively making it very difficult to properly drive their car in a safe manner. This happened around a hundred forty-four thousand miles and came with repair bills that were over $1,200.

The 2007 model year of the Dodge Ram was also known for having some transmission problems. In particular these resided with shifting difficulties like we've seen in other models, as well as total transmission failure requiring replacements. As with others, this problem for some drivers ended up with more than one replacement of a transmission.

Because the Dodge Ram is so popular, it's worth noting that these issues affected a minority of vehicles for the most part. The 2014 Ram 1500 is definitely a year to avoid, but if you are a fan of the Ram 1500 then the 2017, 2018, and 2020 model years have been pretty reliable on average. Every vehicle has its problems, and all three of those model years have had some complaints relating to the transmission, but they've been limited for the most part.

If you're looking for older models that still fell under the Dodge label then the 2009 Dodge Ram and 2010 Dodge Ram  proved to be some of the better years for those models.

If you're in the market for a more heavy-duty vehicle, the 2019 and 2020 Ram 2500 have performed well in terms of how the transmission runs for most drivers. Likewise, the last three years of the Ram 3500 have been relatively free of transmission problems.

Ram has been making some heavy-duty and high-quality pickup trucks for years now and that's why the brand separated from Dodge and became his own label. They've become so synonymous with the idea of a pickup truck they were able to stand on their own two feet. The iconic Ram logo, and the overall look and feel of a Dodge Ram is really something a lot of drivers love and crave.

Keep in mind, when we detail some of the problems that Dodge Rams have experienced over the years, we are pointing out a minority of cases in some of these models. Obviously, as we said, the 2014 model has had a lot of issues. But some of the other years have been decent and well performing. When they do have problems, it's worth remembering that these are a handful of cases often, compared to the hundreds of thousands of models that are on the road.

That reason, if you're interested in getting a Dodge Ram that's from one of the better model years, it's always a good idea just to bring a trusted mechanic with you to give the vehicle a once  over so you can be sure it's going to perform reliably for you. Dodge Ram is a quality vehicle, and generally performs well for most drivers. With the exception of a couple of poor model years that we detailed; you can usually rely on a Ram to give you a good experience.