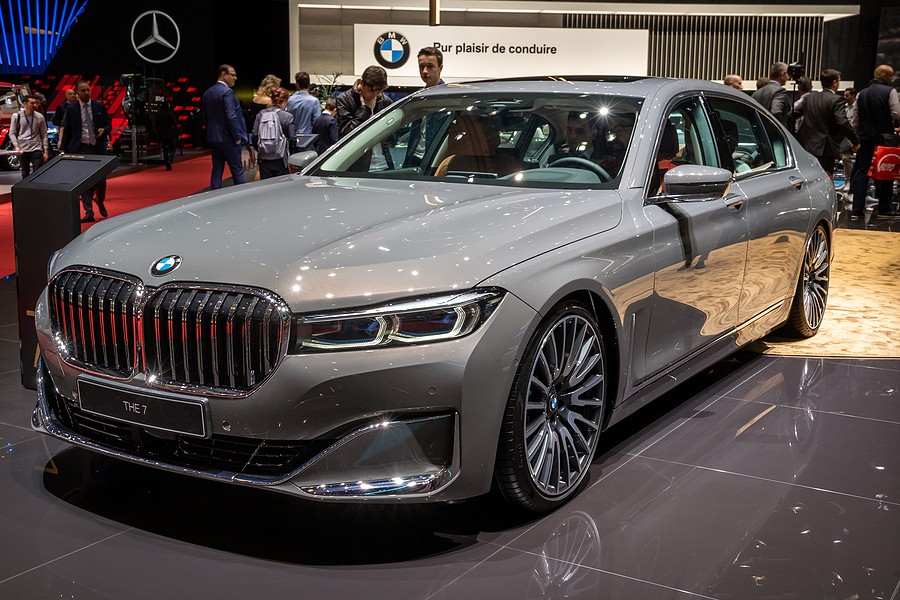 Do BMW 7 series have problems? Like most vehicles, BMW7 do have problems. Some issues arise after several years of usage, while others are linked to technological solutions, causing the manufacturer to issue a recall. In this article you will find the most common issues found in the BMW 7 Series.

The BMW 7 Series also boasts of quality details, individual styling options as well as technical innovations making it the epitome of the BMW luxury class. The car has a distinctive front and at the side, the sedan’s vertical Air Breather emphasizes the vehicle’s height.

The shimmering amber effect on its Bernina gray paint creates commanding elegance. Not to mention the optional 20″ wheels. Before you even get into your BMW, you'll be greeted by the Welcome and Goodbye light staging. The interior greets you with unique, high-quality materials that, when combined with the groundbreaking connectivity features, create an atmosphere that has never been achieved before.

BMW Connected establishes a secure link between your mobile and your car, allowing you to prepare and communicate more quickly. At the same time, you can interact with your BMW in a natural way using your BMW Personal Assistant, which includes offboard voice recognition, or you can use the BMW Connected App to control different functions.

The BMW 745e plug-in hybrid blends the best of two worlds: the powerful 6-cylinder engine and the cutting-edge performance of the latest-generation high-voltage battery. The revolutionary electric motor built into the 8-speed automatic transmission is a key component of the hybrid drive here. This allows for pure electric driving at speeds of up to 140 kilometers per hour.

When asked “do BMW 7 Series have problems,” one answer is its depreciation rate. A BMW 7 Series is a high-end sedan with a reputation for luxury, durability, and technology. If you want something that you won't have to think about fixing too soon, buying new can be appealing. However, the cost of one of these new models is incredibly expensive.

Purchasing a slightly used BMW 7 Series would save you 43.4 percent over purchasing a new one. That means you'll save $47,000 compared to buying new based on the information on a car that’s only a year old. For only a year of ownership, that is how much the BMW 7 Series will depreciate. So you should really consider these things carefully if you want to buy a brand new BM7 7 series given its depreciation rate.

Why is there such a big price difference? It's easy to understand why the BMW 7 Series costs so much less than a slightly older model. It's considered a luxury car. Car buyers are unlikely to pay top dollar for technology that is practically obsolete in a used vehicle, even though it is just a year old.

An engine misfire could cause the engine to idle very badly, as the rev needle jumps up and down instead of staying at a constant speed. It could also cause the engine to shut down. A defective coil pack or one of these two sensors (camshaft or crankshaft sensor) would be the source of the problem.

Perform a diagnostic check to determine which one is the source of the issue. Depending on which part is failing, you'll also need to replace the coil bag, camshaft, or crankshaft sensor. The part you will need is a coil pack.

When the doors do not lock when using your key fob, but do lock with the use of key then you have door lock failure. Faulty door lock motors are the most likely cause of this failure. It's also worth noting that a dead key fob battery may be to blame.

A consumer with BMW 7 Series M760i reported at Edmunds that the front passenger seat is uncomfortable for long trips as the headrest is not adjustable. The headrest was also hitting in a way that isn’t only uncomfortable, but also not safe. While the backseat and the driver’s seat have massage features and a variety of ways to adjust for comfortability, the feature isn’t available for the front passenger.

The front passenger seat also doesn’t have lumbar support, and the only adjustments available are recline, forward and sit straight up. So do BMW 7 series have problems? Yes, when it comes to comfortability. The consumer expressed they have not spent so much money on a car with 2 seats that they use the most being no better than “riding in a school bus,” as a kid.

The battery in the key fob should be tested first, but if that isn't the issue, you'll need to replace the door lock motor. You will need a central locking motor to do the fix.

These common BMW 7 Series issues should help you figure out what's wrong with your car – or what to watch out for in the future.

Do BMW 7 Series Have Problems: Other Frequently Asked Questions

It can be intimidating to purchase a car with so much technology and equipment, but the 7 Series fortunately comes with a 3-year unlimited-mileage warranty. Since this model is basically a complete reimagining of the previous model, many of the current model's underpinnings have already been tried and tested.

The BMW 7 Series is perfectly alright, but it falls short of greatness. It isn't as luxurious on the inside as the Mercedes-Benz S-Class, nor is it as sporty to drive as the Porsche Panamera or as technologically advanced as the Audi A8. But the BMW 7 Series is an all-rounder. In the end, it's still a fantastic super luxury car choice with superb V8 power or a well-integrated hybrid. It’s also pretty enjoyable to drive with safety features you can take pride on.

How expensive is it to maintain a BMW 7 Series?

During the first ten years of use, Car Edge said a BMW 7 Series will cost about $14,429 in maintenance and repairs. This is $2,710 more than the industry average for luxury sedans. During that time, there's also a 40.39 percent risk that a 7 Series will need major repairs. This is 0.83 percent worse than equivalent vehicles in this class.

The BMW 750i offers power on demand and is lovely to drive with its impressively swift performance. If asked do BMW 7 Series have problems on this model, it is that the ride may be occasionally queasy when in Comfort Plus setting. Every control and surface feels solidly crafted and well-balanced. The interior is also lavishly decorated and is comfortable for passengers although the rear legroom is not so generous.

The design looks sedate but elegant outwardly so it may either impress you or just keep you at bay. But overall, the BMW 750i xDrive is a luxuriously plush and relaxing place to spend hours behind the wheel, whether as an oasis of calm on busy city streets or a mile-devouring cross-country exploring sedan.

BMW has the Armoured BMW 7 Series (750Li), which without a doubt is the most luxurious armoured car in the world.  The Bulletproof BMW 7 Series sealed the package by adding security to luxury. BMW 750Li  is actually a top contender in the list for luxury armoured cars used by high profile government officials and businessmen.

What is the best year for BMW 7 Series?

It was the 1988-1994 Second Generation (E32) BMW 7 Series that sales numbers for BMW climbed as well-to-do car buyers legitimately considered BMW in the same breath as that of the Mercedes-Benz.

The E32 7 Series was a big step forward with a beautifully updated and modernized look. Though the base 735i received BMW's traditional M30 3.5-liter inline six-cylinder engine, the second-generation 7 Series also received an all-new 300-hp, 5.0-liter V-12 engine in the 750iL, a new long-wheelbase version that supported rear-seat passengers with nearly five inches more legroom.

Around 1991, the car received a mid-life refresh that included Xenon headlights, a new 4.0-liter V-8 engine, and a five-speed ZF automatic transmission. On some models, a five-speed manual transmission was still available.

The BMW 7 Series of 1995-2001 Third Generation (E38) car that arrived for the 1995 year model was a triumph. Although the styling updates were evolutionary, the changes underneath were even more profound.

The reworked suspension was aluminum-intensive with a new multi-link rear setup, and the unibody frame was a whopping 70% stiffer than the outgoing car. As a result, in terms of handling, comfort, and efficiency, this 7 Series was light years ahead of its predecessors.

The 2002 E65 7 Series was a major advancement in terms of comfort, luxury features, and scale. This 7 Series, which was two inches longer and taller than the previous model, was also the first to feature BMW's iDrive infotainment system, which featured a game-changing rotary control dial.

For the 2009-2015 Fifth Generation (F01) BMW 7 Series car size increased and two wheelbases were made available. The main engine lineup consisted of a combination of new twin-turbocharged V-8 and V-12 models. The twin-turbo 4.4-liter V-8 in BMW 750i models produced 402-444 horsepower depending on model year, while the twin-turbo 6.0-liter V-12 in the BMW 760i produced a strong 536 horsepower.

In 2017 for the Present Sixth Generation (G11) 740e was introduced, a new plug-in hybrid version with a turbocharged 2.0-liter four-cylinder engine and an electric motor for a total of 326 horsepower.

The 2017 M760i, meanwhile, debuted with a 601-hp twin-turbocharged 6.6-liter V-12 engine for the truly power-hungry. Eight-speed automatic transmissions, rear- or all-wheel drive (all-wheel drive is standard in the V-12-powered car), and active lane-keep assist are all available.

There's Alpina, BMW's factory-partnered tuning arm, for those who find even the top-of-the-line versions of the regular BMW 7 Series uninspiring. For several generations, Alpina has offered its B7 model, an updated, even more powerful, and exclusive version of the BMW 7 Series. The new Alpina B7, has a 600-hp version of BMW's 4.4-liter twin-turbocharged V-8.

If you ask do BMW 7 series have problems don’t be discouraged if the answer is yes because if the issue is resolved quickly, it does not have an effect on the overall reliability of your car. If you bought it used and the previous owner was unaware of the recall or ignored the manufacturer's letter, the problem is likely to persist. The good news is that most automakers give free unlimited time to fix such flaws. Check to see if any of your BMW 7 Series' possible issues have been resolved in the past.