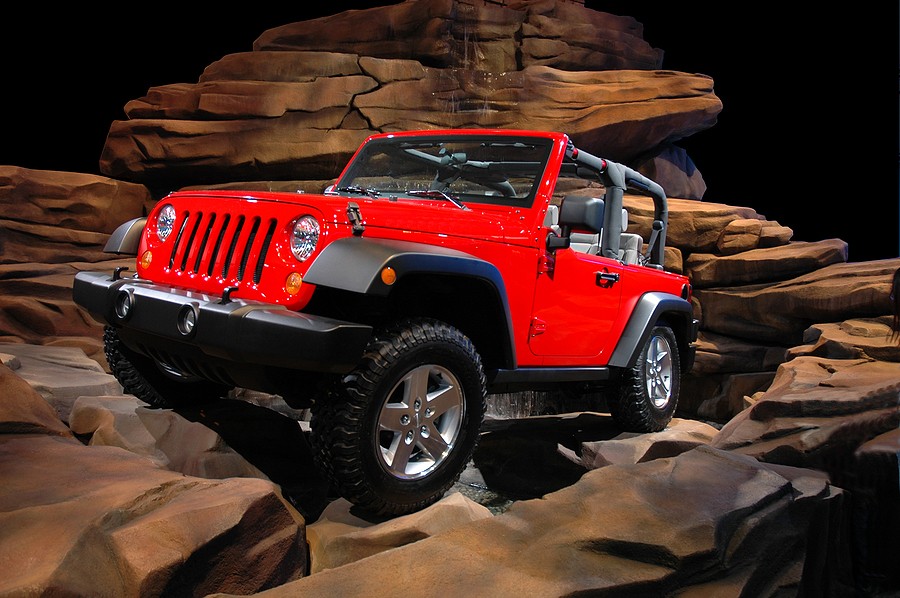 Jeep has been making the Wrangler, and off-road SUV, since back in 1986. It's currently in its fourth generation and has proven to be one of the most popular models in the Jeep lineup. Sales of the Jeep Wrangler have been consistently positive over the years, and they’ve actually been on the rise for about the last decade. They have sold over 150,000 per year in the United States since 2003, sometimes cracking at 200,000 units per year.

Even though the Wrangler is a very popular Jeep model, it's not without its problems. Like any vehicle, the Jeep Wrangler has had issues and some model years have definitely been superior to others. In general, the older models have more problems. For our purposes we'll just start at the 2005 model and move up from there, as anything older is likely impractical and improbable to find for sale anywhere.

The 2005 model year for the Jeep Wrangler had some serious problems in terms of transmission. A number of drivers complain about this issue occurring within 30,000 miles and bringing with it repair bills upwards of $2,000 and more. According to complaints lodged with the National Highway Traffic Safety Administration, the vehicle was prone to popping out of gear while driving.

Another complaint that was frequently cited for the 2005 model year was the fuel tank has a tendency to overflow if you fill it up all the way. Normally when you're filling the tank, the pump will shut off when it reaches the fill point. That was not the case with the 2005 Wrangler and for many drivers no matter what gas station they went to it would routinely overflow without warning.

There were a couple of recalls that apply to the 2005 model year, but the main one was related to an automatic transmission plug cup. If this were to fail when the parking brake was not engaged, there was a chance for your vehicle to roll away and caused an accident. Over 250,000 vehicles were recalled because of this problem.

When a car experiences the Death Wobble once you get it up to a reasonable speed between 40 miles per hour and 60 miles per hour, even a slight variation in road gradient or bumps can make it virtually uncontrollable. It's extremely dangerous and if you don't slow down immediately it's very possible to cause an accident or injury as a result.

The same transmission plug cap recall applies to the 2006 model year 2005 model year. There is also another recall it affected about 45,000 Vehicles. This one was related to a broken clutch ignition lock spring. In this case, it was possible that the vehicle could start without the clutch being engaged and cause it to lurch forward and potentially cause an accident.

In 2007 the suspension issue that led to Death Wobble in the Jeep Wrangler was a much more prevalent issue. Inexplicably, the same issue with the fuel tank overflowing when filling up was also still a problem in 2007.

In 2007 there were a total of 10 recalls issued for the Jeep Wrangler and several of them were fairly serious. Over 4.6 million vehicles were recalled due to a problem with the front airbag inflator not working correctly. If the inflator were to rupture, there was a potential for metal fragments to be exploded outward into the face of someone in the vehicle during an accident causing injury or death.

Over 380,000 vehicles were recalled for issues with the faulty clock spring assembly. That could lead to a problem with the front airbag not deploying during an accident.

Another 287,000 vehicles are recalled due to an issue with a partial loss of service brakes that could end up in a crash causing injury or damage. Almost 300,000 models were also recalled for an issue with the ABS electronic control module failing which could also lead to crashes.

This was also the first year that there was an issue with the TIPM or totally integrated power module, and electronic control centre in many Chrysler vehicles. This issue would continue to be prevalent in Jeeps for several model years.

Of all the model years for the Jeep Wrangler the 2008 was the most problematic. It had extensive issues with electrical problems. This was where the totally integrated power module issues from the previous year really began to stand out as problems. The TIPM is like a central brain for the electronic systems in a Jeep. When it failed, everything from mirrors to windows to lights in the radio could malfunction. Oftentimes they would even turn on and off on their own when you were not even in the vehicle.

There were nine recalls affecting the 2008 Wrangler model year. This included issues with the airbag inflator from the previous year as well as the clock spring assembly and the service brake problems from 2007.

In 2009, suspension issues from earlier years continued to be a prevalent issue. The Death Wobble was still a major concern during this year as was the problem with the fuel tank overfilling.

All of the same serious recalls that had been issued in 2008 continued through the 2009 model year of the Jeep Wrangler.

In 2010 Jeep Wrangler continued to have serious issues with both the fuel tank overflowing and the TIPM being faulty. They were also 11 recalls issued for the 2010 Jeep Wrangler model year. This included several serious recalls including the same issue with the airbag inflator rupturing, as well as A slightly different recall for the airbag inflator exploding. These are technically different but still serious issues.

There were also recalls for issues with the transmission skid plate, and the same problem with the partial loss of brakes as well.

While the chief concern with the 2011 Wrangler model year was again the faulty TIPM causing havoc with the electrical system, they're also extensive engine issues. In particular blown engines, as well as stalling and pinging in the engine.

There were another 11 recalls issued for the 2011 model year, and while many of them were the same ones relating to issues with the airbags and inflators, there was also one for a potential fire hazard in the exterior mirrors due to faulty heating elements.

Once again, they were serious TIPM issues with the 2012 Jeep Wrangler. There were also a variety of engine issues that plagued this model year as well. The engine issues got to be pretty bad for some drivers and required an entire head replacement.

In 2013 the engine issues were continuing to be a problem. The most reported problematic issue was that the engine would stall out or die completely while driving. They're also continued issues with the TIPM failing, the Death Wobble problem, and also a lack of heat through the vents.

There were only 7 recalls issued for the 2013 Jeep Wrangler year, so several issues had been more or less squared away by this time. That said, they still had the issue with the transmission leak, the potential fire in the mirrors, and it was still in the recall for the 1.4 million models that had an issue with the inflator potentially exploding.

In 2014 there were an increase in problems reported with the Jeep Wrangler. Carcomplaints.com listed this as an official clunker on their website, so this would be a model year to avoid just for the prevalence of issues that continue to crop up.

In terms of engine problems, there were serious issues with oil leaks in the engine. Most of the recalls have been cleared up by this year, but the main one dealing with the exploding airbag inflator was still in place in 2014.

The 2015 Wrangler had fewer issues than previous model years. Problems included things like the heater not blowing hot air, the vehicle not being able to shift properly, as well as radiator leaks.

There were only 3 recalls for the 2015 model year. Unsurprisingly, the same issue with the airbag inflator exploding was the main one. The other one affected far fewer models overall.

The 2016 model year of the Jeep Wrangler was mostly plagued by engine issues, although they weren't in any great numbers. The most common complaint related to the engine was that it would simply die while driving. Transmission failure was also a problem with the 2016 year.

Predictably, the same recall regarding airbag inflators exploding affected the 2015 Jeep Wrangler year as well. There was also another major recall issued in 2016 for front impact sensors disengaging during a crash that affected 180,000 vehicles.

The 2017 model year of the Jeep Wrangler was fairly problem-free overall. This was the final year of the third generation of the Wrangler, and though problems were fewer in number there were still some issues relating to loss of power going uphill, transmission failure, and problems with the vehicle coming out of reverse.

There were still 5 recalls for the 2017 Wrangler year but, remarkably, they had finally gotten past the exploding airbag inflator issue that had plagued numerous years prior. The big recall for this year was still the front impact sensor issue and they were smaller issues related to malfunctioning brake switches.

2018 marked the debut of the 4th generation of the Jeep Wrangler. The Death Wobble had returned for this model year, and there were also issues with the vehicle not starting at random times. Drivers also reported issues with steering problems in this model year in that the vehicle would wander on the road. The problem seems to stem from a problem in the steering gear box, but it has been hard to diagnose.

There were 10 recalls issued for the 2008 Jeep Wrangler model year. Many of them were smaller recalls, one relating to incorrect transmission rods only related to 71 Vehicles. The main recall was issued for over 4.8 million models, however. This problem is related to cruise control. Since I'm drivers could potentially have problems not being able to cancel cruise control, which means that if you are at a height of speed and you cannot disengage the cruise control the risk of a crash would greatly increase.

The Jeep Wrangler continues to have issues with crash tests.  While the four-door versions fare much better, the two door Jeep Wrangler steel has a very poor showing in Insurance Institute for Highway Safety crash tests.

The 2019 model year of the Jeep Wrangler has been relatively problem-free, though there are still a few issues that cropped up. The biggest issues that have been reported related to steering problems. Loose steering wheel, or a loss of power steering has been reported by a number of drivers. As for recalls that affect the 2019 year, the biggest one related to what issue was the rear-view camera image remaining on display.

Data for the 2020 model year is fairly limited still. The same recall relating to the rear camera image remaining on the display screen is the only major recall for this year as well. There's no crash test data for the two door 2020 Wrangler, but the four-door has fared fairly well overall and has good ratings.

Early Jeep Wrangler had some serious issues as it related to electrical problems and suspension issues. Newer model years have fared much better so if you're interested in a Jeep Wrangler, make sure you know which model year you are looking at if the problems facing them are concerned for you. The fourth generation seems to be the most reliable so far and would be the best ones to choose.