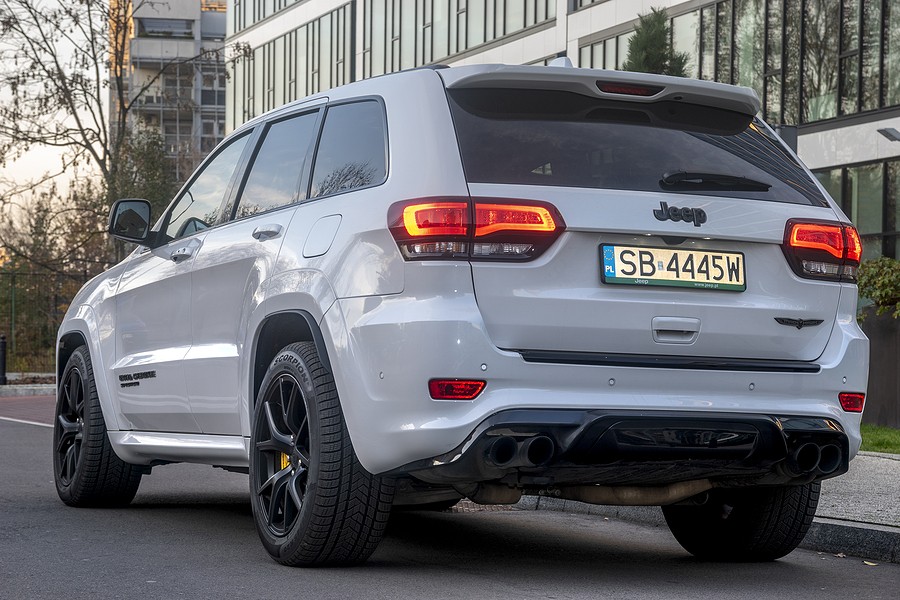 The Jeep Grand Cherokee dates back to 1993 when the first model was first introduced. It  was originally conceived as simply a trim level for the Jeep Cherokee, but became so popular that Jeep included it as its own model in their lineup. As popular as the Grand Cherokee has been in the many years that has been produced, it is not without its faults. In particular, there have been some serious transmission problems in several model years of the Jeep Grand Cherokee. That said, other model years have been excellent.

Let's take a look and see which years are the ones that you actually want to avoid, and which ones would make a great year to pick up if you're in the market for a new or used Jeep Grand Cherokee.

When it comes to transmission problems, the 2015 Jeep Grand Cherokee is the top of the list for years that you absolutely want to avoid. Carcomplaints.com has detailed a number of transmission complaints dealing with this model year. Overall, they rank the 2015 Jeep Grand Cherokee as an absolute klunker on their website, and you definitely want to avoid this particular model year if you're in the market for a new vehicle.

There have been hundreds of complaints lodged with the National Highway Traffic Safety Administration detailing powertrain problems with the 2015 Jeep Grand Cherokee. Some of these complaints detail having to have the transmission replaced almost immediately, while others are related to issues of having rough shifting, grinding when shifting, or the automatic  transmission simply choosing to shift gear on its own regardless of what speed you're driving at.

Common symptoms of transmission issues have been grinding while driving, a whining noise coming from the transmission, or vibrations while driving. The most common issue that people have dealt with seems to be that the transmission basically has a mind of its own. It will automatically shift gears either too early or too late when driving, with no real rhyme or reason behind it. This led to a lot of under performance, lurching, vibrations, and grinding noises overall.

These serious transmission issues happened very quickly, often before 12000 miles. The cost of fixing it was also extremely steep, sometimes getting up to $7,500.

As you can imagine, when your transmission shifts whenever it chooses to rather than when it's supposed to, you run the risk of having accidents as you're not able to adequately control the speed of your vehicle, and if it starts lurching unexpectedly you could seriously end up harming yourself or others on the road.

There was also an issue with the 2015 model that had to be recalled because of an automatic transmission control module problem. Over 800,000 vehicles were recalled by Chrysler for this issue which caused drivers to think that the vehicle was in park, but it actually was not.

Drivers complained extensively of problems with the 2014 Jeep Grand Cherokee and the numerous issues the vehicle had. On Carcomplaints.com they don't call the 2014 model a clunker like they do for the 2015, instead they recommend that you avoid this year like the plague. Anytime a car website refers to a vehicle by invoking pandemic diseases, you know it's serious.

The transmission issues in the 2014 Jeep Grand Cherokee are extensive. The most prevalent problems were issues with shifting, which popped up around ten thousand miles. People complained about issues like when they put the Jeep in reverse it would automatically shift itself back into drive. You can imagine how serious a problem that could be if you are trying to do this around other vehicles or people and it switches gear without warning.

Other issues related to it not being able to shift between 7th and 8th gear and hard shifting between the first four gears. Drivers had taken their vehicle in to get serviced sometimes three, four, five, or even more times and the issue persisted.

The 2014 Jeep Grand Cherokee model has been subject to 14 different recalls. Not all of them are related to the transmission issues, but it gives you an indication of the wide range of problems that this model has experienced. It did have the same transmission problem that the 2015 was recalled for, relating to drivers thinking the vehicle was in park when it was in fact not.

Like the 2014 Jeep Grand Cherokee, the 2011 Jeep Grand Cherokee is one of those models that Carcomplaints recommends you avoid like the plague based on the number of complaints that drivers have logged. For what it's worth, the transmission was not the big problem with the 2011 model, which is why we're listening to 3rd in line here. That doesn't mean it did not have transmission problems, they were just not as prevalent as the electrical issues that other problems the 2011 model year faced.

There were a number of drivers complaining that the 2011 Jeep Grand Cherokee had transmission issues that had to be repaired multiple times. The transmission simply stopped working, it was grinding, or shifting was extremely rough. At least one driver complained that they were unable to ever achieve second gear in their vehicle.

These are the model years that we're not as bad as those big three, but they still have enough problems that you might want to think twice about getting a vehicle made during these years. Or at least make sure you have a trustworthy mechanic with you when you go to take a look at one so that you can make sure you're not going to end up buying a lemon.

The inability to get past second gear was also something that drivers complained about, which you could imagine would be a problem when you're trying to drive on the highway, for instance. For others, shifting out of first gear was not even possible, so getting started from a stop at a light or stop sign prove to be almost impossible.,

The same kind of issues relating to hesitation, grinding, and lurching also popped up in the complaints regarding this model year. Clearly, Jeep was having some issues in this generation.

Like the year before and after it, the 2016 Jeep Grand Cherokee also had some issues with transmission, though it seems to be less prevalent than 2017, and definitely less than 2015. They were still drivers who complained about the same kinds of transmission issues however, but overall, it seemed to be a less problematic year for whatever reason.

While this model year had a few problems, transmission issues were not as serious as some of the other problems. Several drivers complained that there was a problem with the transmission computer, and the car simply wouldn't start. This happened at around 75,000 miles, and it was only a couple of drivers that mentioned it

Other small issues like transmission jerking and problems shifting cropped up for 2013, but not in a huge abundance of numbers that were seen in years like 2011 or 2015.

There were a good deal of issues with the 2012 Jeep Grand Cherokee overall, enough to make us recommend that you should avoid this model year if you're looking at a used Jeep Grand Cherokee. In terms of transmission issues, drivers reported problems with the vehicle downshifting on its own while you were driving.

Although some drivers reported a few electrical issues with the 2010 Jeep Grand Cherokee, in terms of transmission they were very few complaints made overall. There was a recall issued for the 2010 model year related to a possible rollaway problem that would occur if the vehicle is shifted into neutral leave it to potentially rollaway increasing the risk of crash or injury. That affected just under 300,000 vehicles.

If you're in the market for a Jeep Grand Cherokee made within the last decade, these are the model years that have the fewest amount of problems, and we're actually pretty good overall. These are all the newer model years, but that may just be the result of Jeep finally figuring out what was going wrong with the older ones and getting it worked out. There are very few issues related to transmission or anything else for that matter when it comes to these model years. If we're going to recommend any Jeep Grand Cherokees of the last decade, it's going to be these model years.

Transmission problems had been all but cleared up in terms of the same sorts of complaints we've been seeing for earlier model years by 2018. If you're in the market for a newer Jeep Grand Cherokee, the 2018 would be a good year to look at as there were no real issues at all reported with transmission for this particular model year.

Like the year before it, there have been no major issues reported with the transmission relating to the 2019 Jeep Grand Cherokee model year. Even though it's in the same generation as me 2015 model, Jeep seems to have fixed whatever it was playing earlier model years without doing a full update overall.

According to carcomplaints.com, there have actually been no complaints relating to the transmission of the 2019 Jeep Grand Cherokee. There are miscellaneous issues overall that have cropped up for this vehicle, but nothing in abundance that would make you want to stay away from this vehicle anymore than another model year.

There have only been a limited number of complaints logged with the National Highway Traffic Safety Administration for the 2020 Jeep Grand Cherokee, which is to be expected because we're only part way through the year at this point. There have been just a couple of issues with transmission that have come up, a few drivers have mentioned that the transmission failed while driving or accelerating was an issue. Nothing of any significance though, and certainly not in any great numbers that would make you want to stay away from this particular model year.

The Jeep Grand Cherokee is one of the flagships of the Jeep lineup, and everyone will recognize one of these vehicles when it's driving down the road. They have a great reputation as being an off-road, fun vehicle, and in most cases, they really do live up to it. Jeep has a reputation that is well-earned, and well deserved.

As with any vehicle, there have definitely been some years of the Jeep Grand Cherokee that are better than others. As we've detailed, if you're in the market for a Jeep Grand Cherokee then you do well to avoid the 2015, 2014, and 2011 model years of the vehicle. The others you need to be cautious with, but you should be cautious about buying any used vehicle and always use your due diligence before committing to anything that's going to cost you money. Have a trusted mechanic check the vehicle over before you find any documents, and with any luck everything will turn out fine.