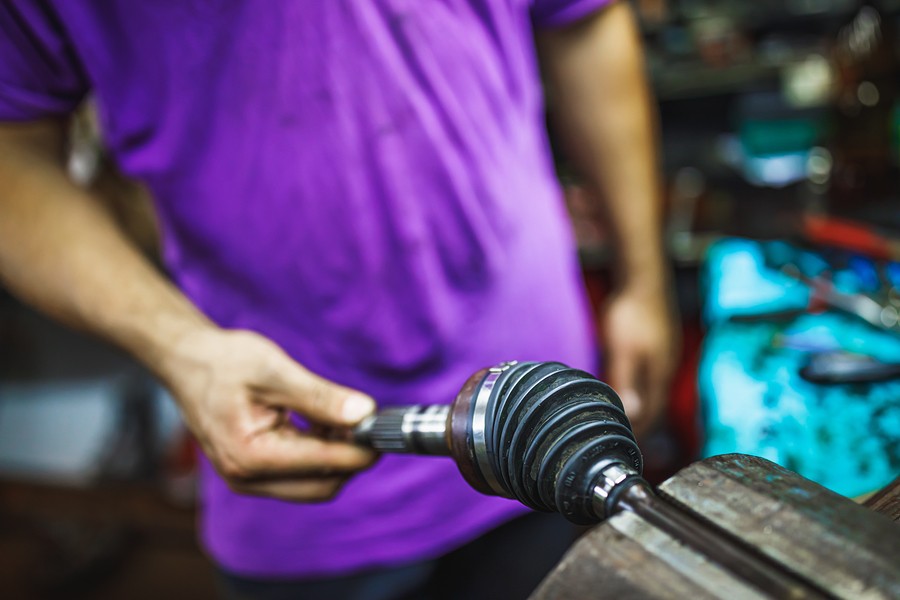 When you hear that telltale knocking or popping you may have to start looking into CV joint replacement costs. No one ever wants to have to replace any part of their car, but it does happen from time to time that something fails, and you need to put the time and money into repairing or replacing it. Things break down due to normal wear and tear, due to accidents, or due to faulty manufacturing. Whatever the reason when it happens you want to know what it's going to cost you to get it fixed. In this case, we’ll take a look at what a CV joint cost to replace and what your options are when you have a problem with yours.

What is a CV Joint?

A CV joint is a constant-velocity joint, sometimes called a half-axle or a homokinetic, and it is part of a front-wheel drive vehicle’s assembly that helps transfer the power from the engine to the wheels while limiting the amount of friction.  Rear-wheel drive vehicles can also have CV joints on the rear-axle half shafts or the drive shaft.

The CV joint looks like a thick metallic ring or donut lined with walnut-sized ball bearings. It’s generally obscured by the CV boot which looks like a corrugated piece of plastic or rubber over the shaft.  Without a functioning CV joint, your car isn’t going to move.

What Does It Cost to Replace a CV Joint?

Replacing a malfunctioning or broken CV joint can be a costly proposition. Just the parts themselves are going to run you anywhere from about $90 to over $200. The final price will depend on the make, model, and year of your vehicle as well as where you buy it from and general part availability. An older vehicle or a rarer kind of car is likely going to have costlier parts to get a hold of. It's also possible that if your car is too old, finding the right part can range from being impossible to costing hundreds or even thousands of dollars.

In terms of actually replacing the part once you have it, you're looking at several hundred more dollars in labour costs. That can take you anywhere from as low as $160 to as high as $800 or more. Again, this is a wide range because it reflects the fees of different mechanics and the technical skill required based on the make and model of the car you drive. The rarer the car you have, the older it is, the more likely it is that you're going to have to pay more money to get this repaired. Unfortunately, that's going to be true of just about any parts, not just a replacement CV joint. As with any repair it's probably best to shop around a little bit to get some estimates and compare prices before you agree to anything if you do in fact need to have a CV joint replaced in your car.

The thing to remember about replacing a CV joint in your car is that you have one on either end of the axle. So, while it's possible you only need to replace one or the other, it's also possible that you're going to need to replace both if something has happened that is serious enough to damage two of them. If that's the case then, as you might expect, the cost you're looking at is going to double to replace both of these joints.

With two CV joints to replace you could be paying upwards of $400 just for the parts and the labour cost will likely be slightly less since your mechanic is going to be down there repairing one anyway but you can expect to pay anywhere between $800 and $1,200 at least to get them both replaced if that's what your car needs.

Can You Drive with a Bad CV Joint?

In the simplest terms, it is absolutely unsafe to drive with a bad CV joint. If the car is driveable at all, meaning it hasn’t been completely damaged, allowing it to get worse will degrade the joint to a point where the car either grinds to a halt or even becomes uncontrollable. You could potentially lose control of the vehicle on the road and get into an accident. If you find your car suffering any of the symptoms of a bad CV joint the best thing you can do is get it to a mechanic as soon as possible.

What are the Symptoms of a Bad CV Joint?

There are a handful of warning signs that will let you know when your CV joint is experiencing some problems. Keep your eyes open for any of these and they'll be a good indication that there's something wrong with the CV joint in your car.

When that protective boot over the CV joint gets damaged not only doesn't risk leaking the lubricant that keeps it functioning properly but you also have the chance to get dirt great and other contaminants inside the joint itself which will further wear it down. This can also increase those grinding and knocking sounds that you hear when you drive, and also seriously reduce the lifespan of the CV joint.

Though CV joints can and will wear down over time like any part of a car will, it's worth noting that when we talk of a bad CV joint it's almost always because the boot has been damaged first and that has allowed contaminants into the CV joint and lubrication to flow out of the CV joint. It's possible that the boots can be intact and in good order while the joint itself is broken but that's an extremely rare circumstance.

How Long Do CV Joints Last?

A factory CV joint on a car made in the last several years has the likelihood to last you for a solid 180,000 miles or more. So basically, these things are meant to last. Thirty years ago, the lifespan of a CV joint was considerably less but you could still hope to get anywhere from 60,000 to 80,000 miles out of one. However, there are replacement parts that circulate in the market that are more cheaply made. If you have a used car that has had this replaced in it or you just had it replaced yourself, you may have got a poor-quality CV joints. These lower-quality joints may only be good for 50,000 miles or less. That gives you the range of how long you can expect these things to last but if you don't know exactly where yours came from then it may be harder to pin down what you can expect to get out of it.

Any part on a car also has the potential to be subject to unanticipated design flaws, so these numbers are just general rules to go by. It's possible that your CV joint could last much longer, especially with routine maintenance and careful driving. It's also possible that an unforeseen and unpredictable problem could greatly reduce the lifespan as well.

Do I Need to Replace Both CV Joints?

There is a lot of work that can be done on a car that will lead a mechanic to say something like “since we're down there anyway let's get this done.” Routine maintenance is often best done all at once, when you need one thing done, you may as well do a few things. It saves you time and effort that way. And you don't need to worry about it later on. That said, repairing or replacing your CV joint is not actually routine maintenance and not one of the most common car repairs that you’ll need to address.. If one of them fails, there's really no need to replace the other one if it's still in good working condition. As you can see it's a fairly costly repair, and the part is meant to last for quite a while. So, if you still have a good number of miles but you're able to drive there's no need to waste time and money by removing a perfectly good car part like a CV joint just to replace it with another one.

There's no harm in having a mechanic take a look at the second joint if they're repairing a broken CV joint but it should really only be to confirm that it still is in fact in good working order. Obviously if it's not then replace both but if it's fine then you may as well leave it as it is.

Is it Worth it to Replace a CV Joint?

It's not uncommon for any driver to wonder if a repair absolutely has to be done on their car. After all, there are some things that you can let slide longer than others for the sake of saving time or money. In the case of a CV joint however, it really is the kind of thing that needs to be repaired as soon as possible. You only have a short period of time when your car will still actually be viable to drive with a broken CV joint. Eventually it will quite literally grind to a halt and it's possible that you might have some axle damage to go along with it that will increase the repair bill in the long run. So, to answer the question “is it worth it to replace a CV joint?” Yes. Not only is it worth it, it is integral to the operation of your vehicle