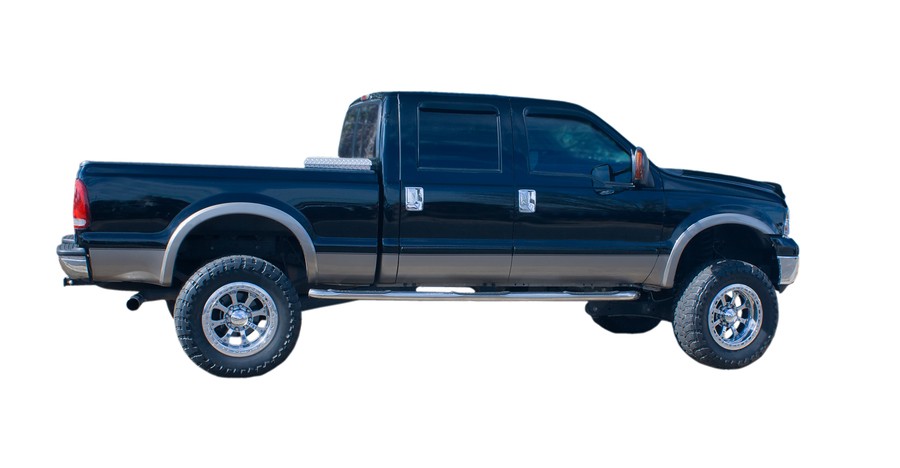 If you’re in the market for buying a new truck, odds are you’ve come across at least one thing that separates them from cars when you’re comparing models and that’s cab configuration. You’ll see some models sold as a crew cab and some as a double cab but what exactly does that even mean? What are the pros and cons of crew cab vs double cab and does it ultimately have any effect on your driving experience? Let’s take a deeper look at what crew cab vs double cab even means and how it affects the way you should be shopping for a truck. What is a Cab Anyway?

The cab configuration of a truck refers solely to the setup of the truck’s interior. How many seats there are and how they’re setup inside the truck is what the cab section is. A regular cab is what is considered the basic configuration and it will be the cheapest option, but it comes at a serious drawback compared to others. The regular cab is just the front row of seating that a truck has to have otherwise no one could sit in it at all, so you're talking about a driver seat, a passenger seat, and that center bench seat. Typically, there will be a small amount of storage space behind the seating as well but nothing particularly significant since you do have that flatbed for hauling most of your stuff. You can see why this is the cheapest option because it really limits how many passengers can be in your truck at one time. If you opt for a regular cab you do tend to get a longer bed in the back which is why it’s still a popular option for people who just want a truck for hauling and for work rather than for driving friends and family around.

There are a variety of other cab configurations available like double cab and crew cab. You’ll find these are pretty standard across all truck brands from Chevy Silverado to Toyota Tacoma to Ford F-150 but it’s worth noting that some of them do use different terminology that can get confusing since two different models may use different words to describe the exact same thing.

What is a Crew Cab?

Pickup trucks evolved directly out of the need to have horses pulling wagons on farms back in the day and were basically created to be working machines that could be faster and stronger than those horses and wagons. That meant, for many years, trucks were very utilitarian, and no one really wanted or needed to have comfort and space for passengers. It wasn’t until 1962 that we actually got the first crew cab in a truck in the Toyota Stout and then the Hino Briska. Dodge introduced them in 1963, Ford was offering crew cabs by 1965 and at long last GM got on board in 1973.

Modern crew cabs are about on par with a car or SUV in terms of rear seat comfort and there will be room for up to six people though those enter seats could be a tight squeeze, but that’s true of any vehicle with seating for six.. The windows will be typical windows that roll down and the rear is accessed via regular sized doors. If a truck doesn’t have four doors, it’s not a crew cab as it just won’t have the room.

What is a Double Cab?’

Double cab may sound like it’s the larger option of the cab configurations but it’s not. That’s not to say it's roomy and a double cab does offer space for a second row of passengers, it’s just slightly smaller than a crew cab. For instance, in our 2020 Chevy Silverado example, a double cab has 39.88 inches of headroom and 35.24 inches of legroom. That’s less than the Nissan Rogue SUV and almost 8 inches less legroom than what the crew cab configuration will offer you.

The GMC Sierra also has 39.88 inches for headroom and 35.24 inches of legroom as GMC and Chevy share the same platform for their trucks, so the Sierra is effectively identical to the Silverado aside from a few incidental items.

From the outside, a double cab may look like a regular cab truck. Some have that smaller, rear-hinged half door that can only open when the passenger or driver’s door is open and some may even just have the two doors that require rear passengers to fold the front seats out of the way so they can access the back. The seats could either be a bench or folding seats as well, depending on the make and model.

If the rear of a double cab has windows, and not all do, they probably don’t roll open and may either be completely stationary or the kind that you can unlatch and pop out slightly on a hinge. If you have a family this may not be the best option in the long run but if you just take the odd friend now and then, maybe some gear for work or the gym, or even your dog, this could be a better option than a regular cab or a crew cab.

What about Quad Cab and Extended Cab?

No doubt when you’re comparing trucks, you’ll also see some being sold as Quad Cab and Extended Cab and so on. This is a confusing thing for a lot of buyers to try to figure out because there is no industry standard name and that has led to different automakers making up their own terms for the same thing. To help make sense of it all we’ve developed this little guide to explain the different cab configurations.

As you can see there are a lot of terms that mean the same thing from one automaker to the next. There is no standardized terminology and also there is no standardized size. Every Crew Cab and Crew Cab equivalent will be of a similar size but not exact, as we’ve seen with our comparison between trucks like the Chevy Silverado and the Ford F-150. The difference may only be fractions of an inch but it's still a difference and it may be more significant than you think. The Nissan Frontier Crew Cab only offers 33.6 inches of legroom for instance, compared to that 43.6 inches in the F-150. That’s a very remarkable shift between two vehicles that are both advertised as crew cabs.

Your best bet is to determine which option fits you best between crew cab or double cab and then research the significant difference between makes and models to determine what will be the best option for you.

When it comes down to which cab configuration you want to invest in for your own truck, it’s all a matter of what you want to do with your truck and why you want to do it. If you want to get a truck as a family vehicle or you're the kind of person who is always driving friends around wherever they need to go then you’ll want to get the crew cab as it’s clearly the best choice. It offers the most space and comfort for every passenger in the vehicle and also affords a little more storage room as well. They come with a lot of great trim packages and options as well to ensure it's more than just a working machine and can truly offer a luxurious and comfortable ride.

If you don’t have a family or don’t plan to be using the truck to drive people around that often then a double cab is definitely a good choice. You have the option to bring passengers along, but it may be less comfortable for them, so it’s best if it's not an everyday thing or a family vacation road trip scenario. In terms of something like a Chevy Silverado the difference is significant to your wallet as well since a crew cab can cost upwards of $10,000 more than the double cab configuration.

Though a crew cab is more expensive upfront, it’s worth remembering that the initial cost can pay off a little bit down the road as a crew cab will have a much better resale potential than a regular cab or a double cab as well. If you do plan to trade up in the future after a few years of driving or just sell the vehicle outright you’re going to get more out of a crew cab than a double cab. It’s really a balance of benefits vs needs here to determine which direction you want to go in the crew cab vs double cab debate.