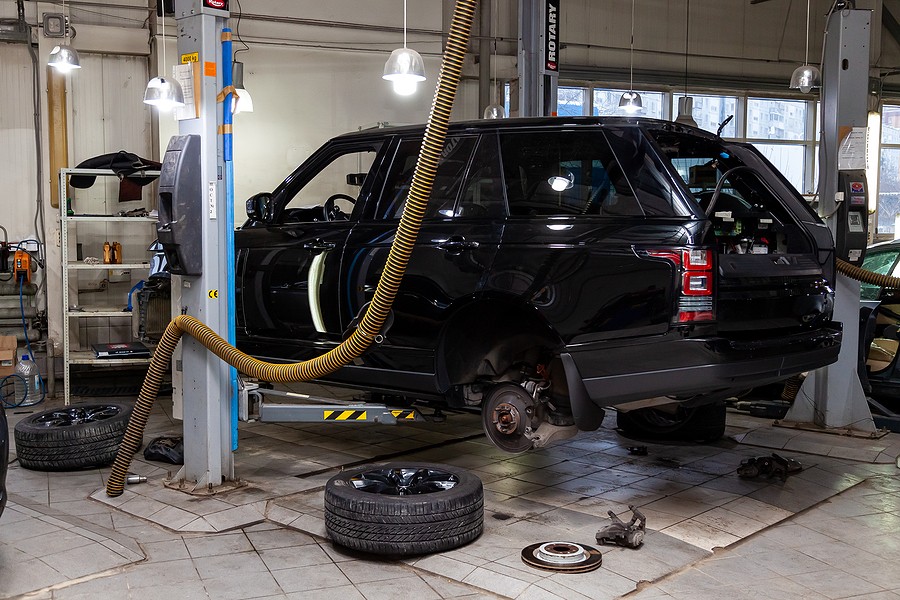 Always dreamed of owning a Range Rover? You are not alone. The Range Rover is one of the most sought-after and desirable SUVs in the United States. Now that the prices have slightly dropped they are considered a bargain in the used car market. When it comes to luxury cars like BMW and Audi most consumers end up purchasing them used. Before you make your final decisions you should ask yourself one question: how much does it cost to repair a Range Rover?

From the outside, the body of a Range Rover looks to be in great condition. Range Rovers are made from tough aluminum which makes them rust-resistant. The manufacturer also uses high-quality paint and a clear coat so most used Range Rovers don't have sunburned spots or any fading. After all, their super sleek exterior and of course the fact that it is a Range Rover might be enough to make you sign on the dotted line.

How Much Does It Cost to Repair A Range Rover – Should You Buy A Used Range Rover?

Purchasing a used car for a steal may seem like a good idea especially in the luxury market. How luxury vehicles like BMW, Audi, and Range Rover instantly start depreciating when the original owner drives off the parking lot. Lexus and Mercedes are luxury car brands that maintain a fraction of their value.

When it comes to deciding whether to invest in a Range Rover, depreciation isn’t the only thing you’re worried about. The primary concern when purchasing a used luxury vehicle is the cost of maintaining the vehicle.

Unfortunately, Range Rovers aren’t exactly known for their reliability. These luxury vehicles are known for being riddled with mechanical issues and unusual malfunctions. So if you are considering purchasing a used Range Rover, ownership won’t be easy. Even Rovers that appear to be in excellent condition are often always hiding some mechanical issues that will quickly erupt into a major problem.

Repairing and maintaining a Range Rover can be very expensive. Regardless of the age or model, these luxury vehicles use high-end parts that are costly. Since they have the tendency to break down a lot you’ll be constantly shelling out money just to keep it on the road. If you’re looking for a reliable and durable SUV that will last for several years to come then you should consider your other options.

. It also consists of a height sensor that detects its distance from the ground. Additional components of the air suspension system include:

Once a Range Rover reaches 100,000 miles the airbags start to leak which can cause them to spontaneously blow out. Slow leaks also overwork the air compressor Replacing the airbags on this SUV can cost between $1,000-$1500 for each bag.

When the air suspension is pulled beyond its limits such as during harsh snowy whether the sensor can go out. This makes it nearly impossible to level the vehicle. If the sensor gets disconnected the vehicle will become stuck at one height. Driving with a faulty air suspension system can be difficult and downright dangerous. The cost of parts for the air spring suspension can range between $250 – $311 while the labor can cost up to $1330.

The valve block is the most expensive component in the suspension system. It controls the airflow between the springs. When the begin leak or completely break down it needs to be repaired as soon as possible. Sometimes it's the electronic control unit that fails in the valve block. The average price for valve block parts is about $236 and it can cost up to $700 in labor.

A well-functioning head gasket is able to successfully prevent leakage between the two engine parts. It’s important that the casket is structurally sound because it will come into contact with all types of chemical compounds including motor oil, fuel, and exhaust gases.

Head gasket in a Range Rover can be caused by

How Much Does It Cost to Repair A Range Rover? – Heater Core Failure

The heater core is similar to the radiator however it’s located right under the dashboard in a Range Rover. The heater core provides the heat that the motor blower needs to warm the interior of the vehicle. Hot coolant from the engine circulates the heater core which is why when it fails drivers will smell engine coolant.

As long as the heater core isn’t leaking any coolant which causes engine overheating, this isn’t a major problem. Depending on the model the heater core part can cost between $312 -$468 while the labor is between $1550-$2,000.

How Much Does It Cost to Repair A Range Rover?- Electrical Issues

People often complain about the electrical issues in all of the Range Rover models. Even the smallest electrical problems can turn into major issues. Also, even having a host of electrical problems is enough to get any driver frustrated. A common problem in the Land Rover is the fuel gauge reading incorrectly. A malfunctioning fuel gauge is a result of the fuel sending unit inside of the fuel tank failing. This issue can pop up in models manufactured between 2003-2006. Repairing the failed sending unit is about $1,418-$1471.

Many Range Rover SUV owners have reported experiencing problems with their vehicle’s infotainment system. The screen tends to freeze which makes it impossible to operate other vital functions in the car such as turning on the heat or the air conditioner and the backup camera. Bluetooth connectivity problems were also rampant. Replacing the infotainment system can cost over $3,000.

Oil leaks happen frequently in Range Rover and Land Rover models that have reached sixty thousand miles. Oil leaks when left unchecked can be detrimental to the health of a Range Rover’s engine. Repairing an oil leak within a Range Rover’s engine can be costly depending on whether the leak is the valve covers or one of the engine cylinders.

The most reported location of oil leaks on Range Rovers is the engine oil pan and the valve cover gaskets. The oil pan gasket replacement is about $608 – $647.

Over the last few years, Range Rover has recalled some of its models for manufacturing defects. Last year, the British brand recalled its 2010-2011 models because of a faulty rear spoiler that had the tendency to detach while the vehicle was in motion which is very dangerous. Range Rover recalled over 21,000 vehicles manufactured between April 27, 2010, and March 28, 2011.

The 2016 Land Rover Range Rover and the Range Rover Sport were recalled for faulty airbag inflator initiators. This defect prevents the airbags from activating in a crash which can lead to further injury.

Also, the 2017 Land Rover Discovery Sport and the 2016-2017 Range Rover Sport SUVs were recalled due to malfunctioning seat belt pretensioners. This was a safety recall that with the issue being that seat belts didn’t fully restrain occupants during a collision.

In another recall, over 65,000 of the 2013-2016 Range Rover Sport models were recalled for unsecure door latches. Range Rover provided a software update that will repair the vulnerabilities in the keyless entry software. If you’re considering purchasing a used 2010 or 2010 Range Rover you should check to make sure the vehicle wasn’t recalled for any manufacturing defects.

Are you interested in an older model Range Rover? A Range Rover or Land Rover with 100,000 miles on the odometer can be a risky investment. Like most used vehicles, once they reach this mile mark the owner will need to ensure that maintenance work is done such as replacing the spark plugs, having the transmission fluid and oil changed.

The service history or lack of can help you determine the actual condition of a Range Rover. If you are considering purchasing a used Range Rover with high mileage you should request the service records. Find out where most of the maintenance work was performed at.

Did a regular mechanic perform the repairs or was the vehicle regularly serviced at a certified Range Rover shop? If the vehicle was well-maintained this can help you feel more confident in your decision.

On the other hand, if you’re going to need immediate work on the vehicle you’ll have to decide whether it’s worth the trouble. Conducting a test drive will also give you an idea of whether the owner kept up with the maintenance on the vehicle. Are there any warning lights on the dashboard? Does the engine allow for easy and smooth acceleration?

At 100,000 miles or more, the vehicle will require a strict maintenance schedule so that it can run another 100,000 miles. Before you make your decision you should find a skilled Range Rover technician who can help you properly care for the vehicle.

For years, Range Rover has been the standard for luxury SUVs and the pinnacle of success. You’ll come across people who have nothing but great things about their Range Rover, but you’ll hear more horror stories from individuals who have experienced the nightmares of owning a Range. However, if you aren’t prepared to spend a few thousand dollars a year in maintenance costs or have the patience required to keep up with this vehicle, then this is probably not the right luxury SUV for you.

These luxury vehicles require a very rigid maintenance routine to run smoothly. You may be able to stretch out an old change for a month in a Toyota but in Range Rover, the oil needs to be changed like clockwork. Since these vehicles are prone to repair problems, you’ll need to have the funds to have them serviced at a certified Range Rover shop.