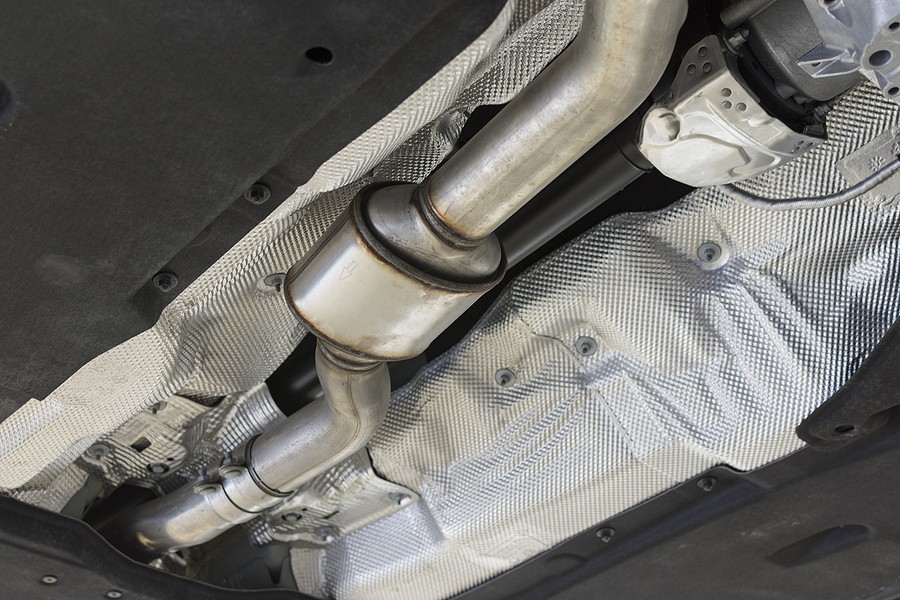 Unfortunately we can't really narrow down the price any more than that as a replacement catalytic converter is one of the more expensive repair jobs you're likely to experience with your vehicle, and the price just has a great range based on a number of variables. Your best bet for nailing it down to something firm is to check with a mechanic that you know and trust to find out what they're going to charge you for the job. If you don't have a mechanic that you trust in town already, then you should check with friends and family for their recommendation or at the very least check out some reviews on sites like Google or Yelp.

If you're looking to buy a catalytic converter on your own, you can get them from AutoZone. Prices range from $80 to about $300 for a new catalytic converter. Obviously, this very much depends on the make, model, and year of the vehicle you're driving, however.

What Does a Catalytic Converter Do?

The catalytic converter in your car uses something called a redox reaction to eliminate several harmful materials from the exhaust before they can be expelled by your car and put into the air. The compounds that a catalytic converter reduces are carbon monoxide, which is a by-product of burning gasoline, hydrocarbons which are the unburned remnants of gasoline, and nitrogen oxides which are a by-product of the fuel and oxygen mixture burning at too high a heat, usually over 2,500 degrees Fahrenheit, creating these harmful compounds.

Signs of a Bad Catalytic Converter

Not only is the amount of pollution that your car will put out a danger if you're driving without a properly functioning catalytic converter, you're also going to face fines if you get caught. It's illegal in most states to not have a catalytic converter on your vehicle, and it's been that way for over 30 years now. So, while you can technically drive around without a catalytic converter, it's not really worth it to do so because of the effect it is going to have on both the environment and your bank account. With that in mind, here are the signs of a bad catalytic converter that you should be on the lookout for.

As with many problems in your car, if your catalytic converter fails it can set off the check engine light on your dashboard. Unfortunately, as we said, there are many things that can cause this light to go off. That's the reason many drivers actually will ignore the check engine light and continue driving for quite a while because there are so many different causes, and not all of them seem to affect it.

Even though it can be tempting to ignore a check engine light when it comes on, you really should get the problem diagnosed as soon as you can to prevent what's potentially a small problem from becoming a much larger problem.

If you want to save yourself a trip to the mechanic, or at least figure out why you need to go to the mechanic at a time, you can use your own OBD2  scanner to figure out why the check engine light came on in the first place. These are the diagnostic tools that mechanics will use whatever a dashboard warning light comes on to narrow down the exact nature of the problem. You can get your own on a site like amazon.com fairly cheaply. Some of them are under $30. If you're interested in how your car operates, and especially if you ever plan on doing some DIY car repairs, it's a good investment to get an OBD2 scanner that you can use to help diagnose problems.

The sounds your car makes are some of the best tools you have for diagnosing problems. Ideally you know what your  car sounds like when it's working normally, so when you start hearing things that are out of the ordinary you can use that to help you pinpoint the nature of the problem. In terms of a catalytic converter, out you may start noticing a rattling sound. The catalytic converter includes the catalyst metal, which is platinum or palladium as we've said, but there's also generally some kind of a honeycomb pattern of ceramic or other material inside the converter as well. If that breaks it will crumble apart and you'll notice the sound it makes as it rattles around inside the converter. It sounds a lot like a can full of rocks or marbles.

When the catalytic converter in your car gets too clogged with build-up and residue, that can greatly decrease the overall performance of your engine. You'll notice this especially when you're trying to accelerate or go up any kind of incline. Your car is going to struggle and seem like it's barely getting the job done compared to what you're used to.

If your catalytic converter has become badly clogged, then it may no longer be able to push out exhaust at the same volume that it used to when it was functioning properly. Because of this the exhaust will push back into your engine, potentially throwing off your air fuel ratio and the whole combustion reaction in your engine which affects mileage. This will cause a problem with how your engine is burning gasoline, and the result will be that you're going to be having to head to the pumps to fill up on gas far more often than you used to.

When your catalytic converter starts to fail, that means it's no longer able to properly convert the pollutant in your exhaust into less harmful materials. One of the side effects of this is that the exhaust your car produces is going to have a distinct odor to it. You don't notice something that smells a lot more like sulphur coming over the back of your car than you're used to.

This is because when your car burns gasoline it creates hydrogen sulfide as a by-product. Your catalytic converter changes the hydrogen sulfide into sulphur dioxide. When the converter isn't working properly you end up with fuel that hasn't been burnt properly and that leads to a sulphur smell that resembles rotten eggs. You can also lead to some darker black smoke coming out of your exhaust as well.

Not every state requires drivers to have their cars undergo emissions tests, but if you live in a state that does require it you will not be able to pass the emissions test if your catalytic converter is not working.

Any of these symptoms on their own could be indicative of potentially summer problems in your vehicle. However, if you experience more than one of them then there's a good chance you should be taking a second look at your catalytic converter to see if it's the problem.

Can I Replace My Own Catalytic Converter?

It's definitely possible to replace your own catalytic converter. That said, this is definitely a more intermediate level repair job that will require you to get your car up on Jack so you can get at it. If you're new to do it yourself car repair, you may not want to start with this particular task. However, if you're comfortable working on your car and you feel like you're up to the challenge but you can find the number of useful Guides Online that can walk you through the process of how to replace your catalytic converter.

Even better, we recommend using a video like this one to show you step-by-step what you need to do. There are plenty of mechanics who have their own YouTube channels that allow you to benefit from their decades of experience repairing cars. And, when you can see what they're doing firsthand, it makes the job a lot easier and will likely make you more confident trying to do the work yourself.

One thing worth remembering though is that if your catalytic converter has failed, it likely failed for a reason. Just replacing the converter won't fix the root cause of the issue. There's likely something going on further down the line such as in the engine of your car that led to the overall failure of the catalytic converter. If that doesn't get addressed, then you can expect the replacement converter to suffer the same fate as the one you just replaced later in life.

The catalytic converter is one of the more interesting parts of your entire car's workings. The fact is that you don't actually need it to operate the car, but it's still incredibly important. It's not legal to operate a car without one which is a major concern that you need to keep in mind. another issue that you need to keep her mind is the overall point of the catalytic converter. This part is essential for maintaining the emissions from your vehicle and keeping pollution to a minimum. As we said, this can remove 90% of the pollutants from the gases that your car produces.

According to the EPA, 75% of carbon dioxide pollution comes from vehicles on the road. One third of the air pollution that produces smog also comes from vehicles on the road. That's what happens when we actually have reduced emissions. That's what's 90% less emissions do. Imagine what would happen if none of those cars have catalytic converters installed in them. The situation with air pollution would be pretty close to catastrophic if we weren't doing something to wrangle it at this level.

For these reasons, you really need to make sure that your catalytic converter is working as well as it can. This is one of those things that's not just a benefit to you as a driver, because again you do face fines that can affect your bank account if the catalytic converter is not installed or is not working properly, but you're also helping out the environment. We all have to manage this kind of thing together as responsible citizens. Even though your individual car may not be that big of a polluter, when you look at the big picture it's vitally important that you keep something like a catalytic converter working well, because everyone else on the road needs to be doing the same thing too.

If you notice any of the symptoms we mentioned, take your car in to get checked out by a licensed mechanic or, if you're feeling up to it, you can go ahead and replace the converter yourself when you know that it needs to be done.