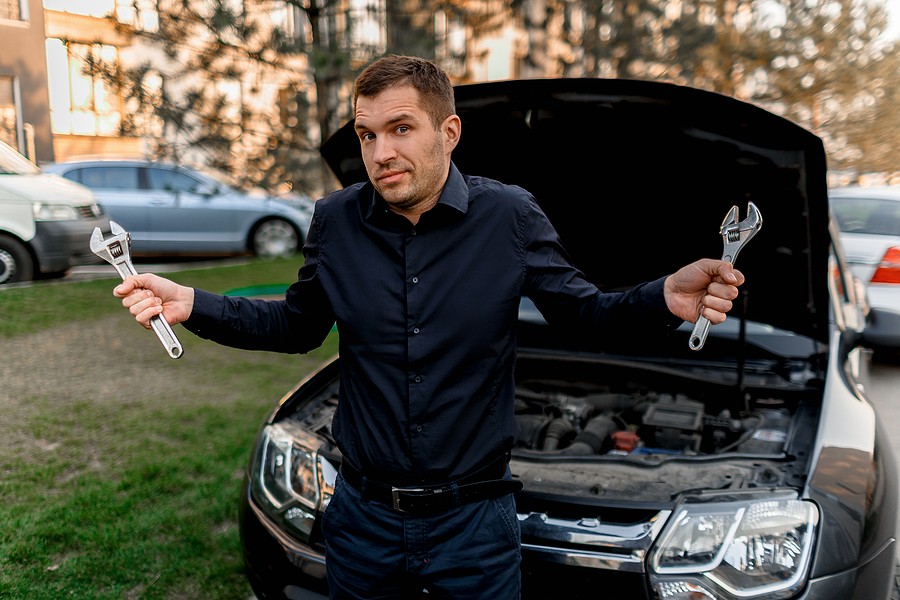 A “car won’t start rapid clicking” situation is not the best way to start the day, but it isn’t the end of the world either. You just need to know what the problem with your car is and here are the common reasons why your car is having the problem:

The unwanted clicking noise usually can be traced to a battery problem and can be fixed simply by jump-starting or tightening a cable. It may be drained or the battery is dead.

A rapid-fire clicking as soon as you turn the ignition key, then low voltage or high resistance might be the problem. If you have unintentionally left the headlights or an interior light on, or something else that may have drained the battery then a set of jumper cables and another vehicle with a good battery should be able to get you running in a short time.

First, check the output voltage with a voltmeter. If the reading comes less than 12 V then a bad battery is definitely the source of trouble  But a dead battery is not necessarily bad or damaged. If the battery is not transmitting power due to low electrolyte levels, then recharging electrolytes will be able to solve the problem. This is the reason why you should go for the best car batteries. That will help you avoid such frustrating scenarios.

But there’s a bigger problem when a car won’t start rapid clicking is all there is because the battery itself is no longer holding a charge. In short, the battery is dead. Batteries may last less than 3 years to more than six, and that depends on where you live and your driving. If you want to make sure the battery is in fact already dead go to a parts store since most of them will test a battery for free. They will be able to tell you if you need a new one.

The second thing for you to do is check the clamps for the cables that are connected to the battery. The clamps may have come loose from all the road vibrations and may no longer make a good electrical connection, so they need to be tightened. If that is not the case then it must be that the corrosion has built upon the terminals. Once this happens disconnect the cables to be able to clean off the muck and this might restore the good connection.

Another possible problem for a car won’t start rapid clicking is the alternator. If the alternator that generates the power that recharges the battery isn't doing its job then that might be the cause of the problem. When the starter motor activates it drains much of the battery’s stored power so the alternator is supposed to replenish it.

If the battery itself is capable of taking a charge and tests alright, then it needs to be rejuvenated between starts. A technician should test an alternator to determine if it’s still working properly. A bad alternator will show signs and one of those is a dead battery.

If other things like the stereo, headlights, and other accessories work and the battery still appears to be charged, and you only hear one click, then the problem potentially lies with the starter motor or the solenoid. The solenoid is the part that engages the starter motor so it turns the flywheel and starts the engine. Unless you’re good at DIY auto repairs, then this is something that only a technician should diagnose.

When all DIY checks are not able to give you the cause of this “car won’t start rapid clicking” situation then it would be better to consult a pro technician instead of continuing to guess which parts you really need to replace. Doing otherwise might cause a very expensive misadventure.

A jammed up or frozen engine is another possible explanation why the car won't start and has a clicking noise instead. By attempting to manually kick the engine off with a breaker bar and wrench, the locked-up problem can be solved. Also turn the car on in the event of a frozen engine and allow some time for the engine to gradually warm-up.

Avoid this problem altogether by refilling the coolant even before the winter season comes and by not parking the car out in the open when the temperature drops very low.

So how do you prevent a problem when a car won’t start rapid clicking? Do regular checkup and maintenance of the car battery and alternator as well as a yearly inspection of the ignition system.

What are signs that the alternator is going out?

Flickering headlights, stalling, or unusual noises when driving are just a few symptoms of a failing alternator. The alternator, being a major component in a car's electrical system, converts the energy from the crankshaft into useful electricity to power a vehicle's electrical systems and help in recharging the battery. So when a “car won’t start rapid clicking” situation happens it’s probably a sign of an alternator going out.

When the ALT or GEN indicator lights up that is often the first sign that the alternator is going bad so don't ignore this indicator, even if you are not seeing other symptoms. Take the car to a reliable mechanic for a diagnostic right away.

Flickering or dimming headlights best signal that your alternator is not working as it should as it is the part responsible for providing power to the headlights. Flickering equates to a struggle to stay on.

An alternator failure can cause some bearings to fail in the engine, and this will create unusual rattles. So this sign with the other symptoms mentioned may be a sign of alternator failing..

The time comes when batteries fail but a bad alternator can also cause the battery to drain because it's not able to recharge it. So it is important that if your battery goes dead, you also have the alternator checked so it doesn't happen again.

When an alternator starts to fail it creates a domino effect in the car’s electrical component that can ultimately lead to a breakdown. Other systems that are powered by the alternator also start to go like the car’s radio, power windows, power locks, dashboard lights, and air conditioning. There are other things that might be causing these failures, but it’s best to have the alternator checked first by a trusted mechanic.

How do you tell if it's your starter or your battery?

Your car starter has a very important role to perform. The battery will shoot a burst of energy to the start which uses this power to turn the engine over and get the car started. You will know there is a problem with the starter if you put the key in the ignition, but only hear a click when you turn the key. A “car won’t start rapid clicking situation” is also applicable to a starter motor problem, especially when you hear only a single click.

You will also know that it’s a bad starter when you try to start the engine and only find the dashboard lighting up without the engine powering up. Jump starting your car or vehicle will not turn over the engine at all if your starter is bad. A variety of issues can lead to a starter failing like dirty connections, loose wiring to and from the starter, battery corrosion, damaged or worn-out parts in the starter system, or oil leaks.

Can you jump a car with a bad alternator?

The car battery depends on the alternator to stay charged. So with all the electrical components of the modern vehicle, it is not possible to sufficiently supply energy to all of these components relying on battery power alone.

When you have a bad alternator, you will really need to have it replaced immediately. But if a non-working alternator left you stranded somewhere because your car no longer starts you can still attempt to do a jumpstart so that you can have just enough energy to get the car back on the road to drive it to a nearby auto repair shop. This is however applicable to only some vehicles.

A “car won’t start rapid clicking” situation may stem out from a number of issues in your car – from a faulty starter to a bad battery. You may be able to diagnose if the symptoms are glaring for a certain issue but most of the time it is best to have your car checked out by a reliable mechanic — for misdiagnosing the problem to be a certain issue will cause an endless loop of car parts replacement that in the end will not completely solve the issue.