Car Burning Oil and White Smoke: Is There a Connection? 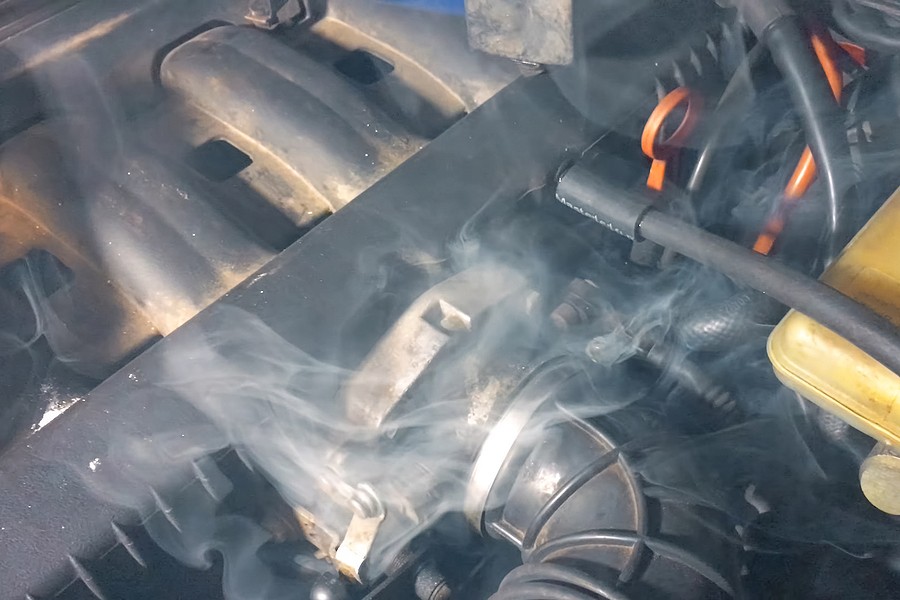 The oil that you put into your car is the lifeblood of it in a lot of ways. If you don’t have enough oil in your car or, worse, if your car is burning oil because it’s leaking, this could present a big problem for you. In a worst-case scenario, it could lead to engine failure. One of the ways that you can tell whether or not your car is burning oil is by keeping an eye out for any smoke coming out of your exhaust system. It’ll let you know if there is oil burning underneath your hood. The color of smoke is going to be very important, though, as different-colored smoke can indicate different problems. Some people worry about a connection between a car burning oil and white smoke, but this is usually not what leads to white smoke forming. Here’s what you need to know about it.

What Is White Smoke?

Under normal circumstances, you shouldn’t be able to see any smoke coming out of your car’s exhaust system. Any exhaust fumes that shoot out of your car’s tailpipe should be invisible to the naked eye. But every so often, you’re going to see smoke come out of your tailpipe. You should pay close attention to it as this smoke could be trying to tell you something about an issue with your car. You might see black, blue, or white smoke coming from your exhaust system.

White smoke is, as its name would suggest, white, but it can come out of your exhaust system in several different shades of white. In some instances, it might be a very light white color and hard to see unless you really look closely at it. In other cases, it might be a very dark white color and be thick in nature. But either way, white smoke coming out of your tailpipe is going to suggest trouble within your car. You might wonder if there is an issue with your engine or if you have a car burning oil when white smoke is coming from it.

Is It Normal to See White Smoke When You Start Up Your Car?

Although white smoke is usually a sign that there is something wrong with your car, we do want to point out there is one instance in which you do not have to worry about your vehicle when you see white smoke coming from it. You don’t have to be concerned at all if you spot white smoke coming from your exhaust right after you start your car up. This is usually just a sign that there was some condensation built up in and around your engine on a cold morning.

You should make sure that the white smoke coming from your exhaust when you first start your car up goes away within a minute or two. You should also make sure that it’s not too thick. As long as it goes away relatively fast and is a light white color as opposed to a dark white color, you probably don’t have anything to worry about. It’s normal for white smoke like this to come out of your car when you start it up after it’s been sitting idle for at least a few hours.

Is It Normal to See White Smoke Coming From Your Exhaust All the Time?

Since it’s normal for white smoke to come from your exhaust when you first start it up, you might be inclined to ignore it when you see it at other times. How bad could things really be for your car when you have white smoke coming out of it? As it turns out, really bad in some cases, which is why you shouldn’t ever turn a blind eye to white smoke. There are some serious issues that can cause white smoke to come out of your car day in and day out.

If you ever see white smoke coming from your exhaust all the time, you’re going to wonder what could be causing. Is your car burning oil and leaving white smoke in its path as a result? That’s usually not the case, but that doesn’t mean that you shouldn’t still be alarmed by what’s going on. You could have a serious problem on your hands when white smoke starts coming out of your car.

More often than not, white smoke is an indication that either coolant or water has found a way to get into the combustion chamber in your engine. This coolant or water is then burned off as you drive, and it produces the thick white smoke that you’ll sometimes see coming out of cars. The white smoke itself isn’t going to do much harm to your car in the short term, but it will serve as a huge red flag alerting you to the fact that there is something else going on. Here are some of the most common causes of white smoke.

You can usually avoid having a cylinder head crack on you by working hard to keep your car’s cooling system maintained. This will stop your car from ever being put into a position where your engine is overheating. You should make sure that you have fresh coolant in your car to keep your cylinder head in good condition. Otherwise, you could find yourself with a cracked cylinder head and white smoke coming out of your exhaust to boot.

Your engine block is the part of your car that you think about when you picture your engine. It’s the structure that is used to house all of the different cylinders and other components that make up your engine as a whole. In extreme cases, there may come a time when your entire engine block will crack on you, thus leaving it susceptible to coolant that will work its way into the various crevices in your engine block. This will result in your engine burning this coolant off and sending white smoke out of your tailpipe.

If you ever have a cracked engine block, you’re going to be forced to deal with one of the worst car problems possible. You’ll have no choice but to either do extensive repairs to your engine or potentially get rid of your car altogether. The white smoke coming from your exhaust system will suddenly seem like the least of your issues.

Is There a Connection Between a Car Burning Oil and White Smoke?

We’ve laid out several of the different scenarios in which you might see white smoke coming out of your car, but you might still be wondering, “Is there a connection between a car burning oil and white smoke coming from it?” In most cases, no. There is a chance that your car might produce white smoke if you have both coolant and oil burning in your engine’s combustion chamber, but this won’t usually be what happens.

In the event that you have oil burning under your hood, you’re more than likely going to see blue smoke coming from your exhaust system. It’ll let you know that you have a bad valve seal that’s allowing oil to leak from your car or that you have oil leaking from one of the pistons in your engine. These can also be very serious issues and will need to be addressed right away to prevent them from getting even worse.

Should You Continue to Drive a Car With White Smoke Coming Out of the Exhaust?

Since there isn’t a connection between a car burning oil and white smoke, you might not be super concerned when you see white smoke coming from your car. But as we’ve stressed a few times now, white smoke isn’t anything to sneeze at. It could be even worse than seeing black or blue smoke in some cases.

You should fight off the urge to continue driving a car when there is white smoke coming out of it. That white smoke is, in all likelihood, going to be telling you that there is an issue with something like your head gasket, cylinder head, or engine block. And if you choose not to do anything about it, it might not be long before your entire engine goes kaput and you’re forced to repair or even replace it.

What Should You Do If White Smoke Is Always Coming From Your Exhaust?

If you ever find that there is white smoke coming from your exhaust pretty much all the time, you should stop driving it right away. You should then find a way to get it down to your local auto repair shop so that they can take a closer look at it. They’ll be able to climb under the hood to see what seems to be causing white smoke to come out of your exhaust.

In a perfect world, they’ll tell you that the white smoke coming out of your car is being caused by little more than condensation. But you also need to mentally prepare yourself for the fact that you could have a more serious engine problem on your hands. Either way, you’re going to have to spring into action and make the necessary repairs to your car to stop white smoke from coming out of it.

Can You Sell a Car With White Smoke Coming Out of It?

If you own a car that’s on the older side and it has white smoke coming out of it, it might not make sense to fix whatever problem is going on with it. Despite the fact that there isn’t a connection between a car burning oil and white smoke, your car still might need to have expensive repairs made to it. Rather than making them, you should think about selling your car and parting ways with it for good.

You’re not going to have much luck selling it to someone looking for a car to drive. No one is going to want to buy a car that needs to have a bunch of work done to it. But you will be able to sell it to a company like Cash Cars Buyers. We’ll pay top dollar for your vehicle and pick it up from you so that you don’t have to worry about dealing with white smoke anymore. Contact us now to get a great offer for your old vehicle.

PrevPreviousCan You Drive With a Broken Head Gasket? We Would Advise You NOT To!
NextHonda Accord Transmission Problems – Watch Out For Issues Shifting Gears!Next