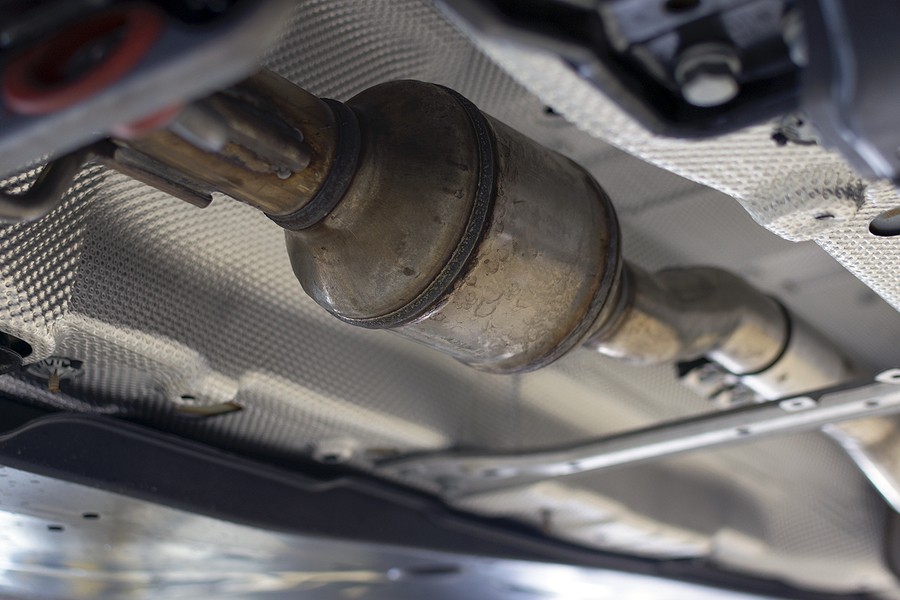 The catalytic converter is an integral part of your car's exhaust system. You will find it bolted to the bottom of your car between the muffler and the engine. It looks like a big metal box and it has two pipes coming out of it. Its primary job is to reduce emissions from the exhaust.

One of those pipes is called the input. It connects directly to the engine. It brings in polluted fumes from the engine cylinders. The other pipe is called the output and connects to the exhaust pipe. The converter itself contains precious metals called catalysts that react with the pollution before it can be released into the atmosphere.

Gases from the engine fumes blow over the catalyst, causing chemical reactions to take place on its surface. This causes the pollutant gases to break apart and convert them into other gases which are less harmful to the environment.

a catalytic converter has two different catalysts. One of them employs a chemical process called reduction. When you perform a chemical reduction you reduce oxygen. This causes nitrogen oxides, nitrogen, and oxygen gases to break up.

The other catalyst works by a process called oxidation in which oxygen is added. This process turns carbon monoxide into carbon dioxide.

What happens when a converter goes bad?

If you drive with a bad catalytic converter or no converter at all, your car will emit dangerous gases into the air. Anyone sitting in your passenger seat will get a good solid whiff of rotten gas.

Your car is also likely to smoke every time you drive. Although your car will not stall out, it will not have optimal performance if you are driving without a converter. The cops can stop you from driving with a bad catalytic converter. They will give you a very big-ticket and you won't be able to drive your car until you make it legal by getting a new converter or a new car.

If you drive for a very long time with a bad catalytic converter it can become clogged and that can cause your car to stop running entirely.

How can I tell if my converter needs to be replaced?

The catalytic converter should last for about 10 years. This it's not quite the life of most cars, but it is longer than most people will actually drive a car before getting a new one. There are a few problems a car might have that are indicative of a bad catalytic converter.

If you put the pedal to the metal only to discover that nothing happens, this may be because the catalytic converter is starting to go bad. Your car may be very slow to accelerate if the converter is not working properly.

There are several things that can cause a rattling noise in your car. However, if that noise is particularly loud, it can be caused by a bad catalytic converter. When this happens, it is because some of the parts have become loose. Lose components in a converter can cause your exhaust pipe to become blocked. When this happens your wheels will freeze and you might cause a crash.

There is a Smell of Rotten Eggs

If the engine light turns on and you notice a very unpleasant smell, there's a good chance that your catalytic converter is not doing its job. Carbon dioxide does not have a very pungent odor; you won't normally be able to smell it if the converter is doing what it should.

When a converter gets clogged up it cannot turn carbon monoxide into carbon dioxide. Therefore you can smell sulfur in the air.

The very biggest indicator your car can give you that it has a bad catalytic converter is if it does not pass its emissions test. States require that your car passes an emissions test before they will give you tags.

How long can you drive with a bad catalytic converter?

Catalytic converters did not exist until 1975 in your car will technically drive without them. There is no way to legally drive your car without one, They are critical to the health of the environment and the government requires all cars to have them.

If your catalytic converter is slightly bad and you only use your car occasionally for very short trips, you may be able to get away with driving it until your next emissions test.

If you drive your car on a daily basis, you may notice that your car is running rich or burning too much fuel. You can technically still drive the car, but the fuel economy will be terrible and it will be much more economical to add an unclogging solution to your gas.

The inner fiber of the converter can catch on fire when your converter is clogged. A clogged converter can cause your vehicle to stop running. Your car can get very hot with a bad catalytic converter and an overheated engine can wreak havoc with other components of your automobile.

How effective are catalytic converters at protecting the environment?

Diesel cars use two-way oxidation catalysts as opposed to a three-way catalyst. They are specifically made for diesel exhausts, which is much cooler than gasoline exhausts. They are not as effective as regular converters and therefore diesel engines emit much more pollution than regular cars.

Both auto engineers and environmentalists have discovered a serious issue with converters. Even though they convert most nitrogen oxides into nitrogen and oxygen, they produce a small amount of nitrous oxide (N2O) which is a greenhouse gas that is over 300 times more toxic than carbon dioxide. Given that there are millions of cars on the road this is a very grave problem.

How can I unclog my converter?

If your converter is merely clogged their products that you can add to your gas tank to unclog them. You can pick up a bottle at any automotive store for about $25.

Getting a converter repaired can cost between $945 and $2475 including parts and labor. A new converter will cost around $2250. If you decide to replace or repair your converter, you will have a couple of options as to where to go for work.

Taking Your Car to The Dealership

If you take your car to the dealership, you will end up paying two or three times as much as you would if you took it to an auto body shop. However, the dealership will be able to rent you a car, while your car is being worked on and they will bill you by the job and not the hour so you will never be surprised by the bill.

A mechanic at a dealership will be trained in your specific make and model of car. However, catalytic converters don't vary that much from car to car, so a regular Auto Body Shop mechanic should be able to handle repairing or installing that particular component with no problem.

A dealership may have more of the parts on hand for your particular make and model of car, so you will not have to wait as long for repairs.

Taking Your Car to an Auto Body Shop

Going to the auto body shop is the most popular way for Americans to get work done on their cars. The vast majority of auto body shops in the country are part of a chain and they offer discounts and programs for loyal customers.

AAA maintains a comprehensive list of approved mechanics in all 50 states that people can reference when they are looking to have work done on their car. When you select a mechanic from this list, you should also go to the Better Business Bureau website to make sure that they do not have any complaints against them.

be sure to get an estimate of the repairs in writing and ask the mechanic what kind of training they have had.

When the catalytic converter goes, it is actually probably time for a new car. When you buy your new vehicle, you will have several options as to what to do with the old one.

When you Google, “sell my car online” many websites will come up. These websites will charge you a monthly fee to list your automobile. You will have plenty of competition if you sell your car this way and you may have to have your listing up for several months before you even get one prospective buyer.

Once you do get a bite on your line, you will have to make arrangements to show them the car. You may have to do this several times before actually making a sale. Most people who are in the market for junk cars are mechanics and they may only be interested in a part or two rather than the car.

Selling your car online can be dangerous. Dangerous criminals have found victims online using electronic billboards such as Craigslist.

if your catalytic converter was damaged beyond repair in an accident, you may be able to file an insurance claim on it. If the damages to your car total more than 75% of the amount of money that it is worth, the vehicle will be considered totaled. If the car is totaled, the insurance company must pay you whatever the car was worth seconds before the collision.

Unfortunately, there are few regulations for determining how much any particular car is worth. It is up to the insurance company to decide the value of the vehicle. The insurance company wants to keep its money and will not offer you very much money for your car.

You can either take the settlement the insurance company offers you, or you can hire a lawyer to negotiate on your behalf. Although a lawyer may be able to get you more for your car, they will also keep a large percentage of the funds.

If you are going to buy a new vehicle, the salesperson at the dealership will be authorized to give you a trade-in for your old car. Generally, they will offer you far less than they should.

Sometimes, a dealership may give you what seems to be a fair price for your old car. If they do this, you should read your final offer very carefully. Make sure they have not put the money that they gave you right back on to the final price of your vehicle.

When you go into the dealership, do not tell them that you have a car to trade-in. Get the salesperson to give you a final price in writing and then tell them about the trade-in. That way, they can't try to trick you.

Selling your car to us is very simple. Just fill out our form and wait for us to call you with an offer on your vehicle.

Our form asks for your name, email address, and phone number. It also asks for the year, make, model, mileage, and VIN number of your car. We are primarily interested in cars manufactured after the year 2000.

Once we receive your form, we will call you back and make you an offer. If you decide to take the offer, we will make an appointment to come to get your car. Our employee will arrive right on time, perform a brief inspection, pay you in cash, and tow the car away for free.