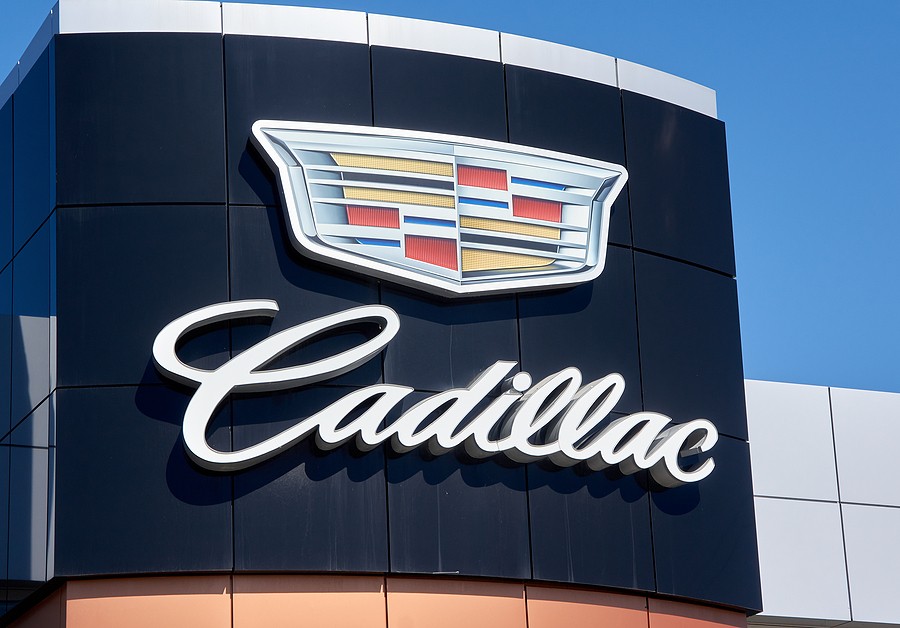 Cadillac is giving us a look at its first player in the luxury electric vehicle market—Lyriq SUV. It was introduced to the world during a virtual presentation from General Motors’ headquarters in Michigan. It looks very futuristic with its sharp styling and modern cabin. According to Cadillac, the Lyriq will come in both single-motor rear-wheel drive and dual-motor all-wheel drive models.

The Lyriq has been designed from ground up and will be equipped with GM’s new scalable battery architecture. Cadillac says it will have a low center of gravity and a roomy cabin made possible by the dedicated EV-architecture. The Lyriq is said to be available on the market in late 2022 as a 2023 model. It is an all new nameplate for the struggling American luxury brand and Cadillac’s first all-electric offering. It is expected to compete with big shots like the Tesla Model X, Jaguar I-Pace, and Audi e-tron.

Cadillac has not yet announced Lyriq’s price or if it will follow the brand’s typical trim-level arrangement. But its base trim is expected to start at just under $60,000, which is required for state incentives eligibility in California and New York.

According to Cadillac, the Lyriq is designed to exhilarate the senses. It spearheads Cadillac's new design language with its style that combines sensual and technical. It has decisive graphic elements which contrast against its fluid form. The Lyric comes with a full-glass two-tone roof that subtly slopes to make a fast profile and has a choreographed lighting and iridescent colors that engage the senses. It looks effortless and at the same time very attractive.

The Lyriq show car has 23” wheels which creates a dramatic wheel-to-body ratio. On top of that, the wheels have a clever detail which is a Juniper-tinted matte finish which matches the interior color palette.

The Lyriq has a standard rear-wheel drive form with an electric motor on the rear axle. But also available as an option is an all-wheel drive and an additional second motor at the front to drive those wheels. Cadillac also boasts that the Lyriq comes with a near-instantaneous torque that will press you into your seat and has a taut and responsive steering.

Cadillac has not yet revealed any details on the Lyriq’s electric powertrain so we do not know how much horsepower it will make. But for sure, acceleration is to be swift, at least at lower speeds. This is credited to the immediate nature of the power delivery of an electric motor. For instance, the I-Pace can leap to 60 mph in 4.3 sec.

GM is introducing a line of new EV battery technology with the Lyric dubbed as Ultium. The new Ultium propulsion system is said to take the vehicle’s performance to the next level. Being the structural element of the body chassis system, Ultium makes it possible for almost a 50/50 weight distribution of the Lyriq and a lower center gravity. These combined makes the vehicle sporty, responsive and enables spirited driving.

The scalable technology makes it possible for the auto manufacturer to produce batteries that range from 50 kWh to 200 kWh in size. But the biggest size is reported to be reserved exclusively for large EV pickup trucks like the upcoming GMC Hummer EV SUT. Cadillac claims that the Lyriq will have a battery that has about 100-kWh worth of capacity and has the capacity to drive ranges of more than 300 miles per charge. This means you won’t have to worry about the range and the need to charge frequently. DC fast charging capability will be standard, but it can also be charged on home power outlets.

The Lyriq concept vehicle has a spacious interior with four seats. It has a center sole that divides the two front and two back seats. It also has a touchscreen for rear seat passengers. It is not certain though how many of that will be produced but it is expected to have three-across seating on the second row. According to Cadillac, the use of the dedicated EV architecture gives a more airy and open cabin with abundant space for passengers to be more comfortable. On top of that, the Lyriq comes with a more advanced cancellation technology to reduce road noise inside the cabin. The interior designers have also incorporated surprises like hidden storage cubbies and backlit speaker grills.

The interior also has opulent Juniper-toned leather seating surfaces and the Moon Glow aluminum accents make it modern, not to mention the driver-centric LED display that is comfortably within reach.

Like the new 2021 Escalade, the Lyriq’s dashboard is dominated by a large, 33-inch curved OLEd display, serving as the driver’s gauge display and the SUV’s infotainment. The display spans the entire viewing area of the driver which makes it aesthetically appealing as well. The infotainment system can be navigated and controlled by a click wheel on the center console in the Escalade which is perfect for drivers who are not fond of touchscreens. It also comes standard with Android Auto, Apple CarPlay and a Wi-Fi hotspot.

A Cadillac exclusive AKG Studio 19-Speaker Sound system will be offered but it is not yet revealed if it will be a standard or an optional feature when the Lyriq arrives on the market. Cadillac said that it will provide a pure sound–accurate, perfect and clear from distortion. All speakers are strategically placed to optimize sound so all passengers will be guaranteed with an immersive audio experience.

Cadillac also mentioned Sonic Enlightenment  where the perforated speaker patterns emit not only sound but also light from each door through cues from the interplay of sunlight and leaves overhead. And despite the fact that it is packed with tech features, you would not feel overwhelmed because of the way the interior is smartly designed to have seamless forms and intuitive technology. It looks clean, simple and spacious.

Cadillac is also providing Lyriq with an augmented reality head-up display, employing two planes: a near plane which indicates speed, direction and more, and second, a far plane which displays transparent navigation signals as well as other important alerts.

Both the National Highway Traffic Safety Administration (NHTSA) and the Insurance Institute for Highway Safety (IHHS) have not yet released crash test results for the Lyriq. But it is expected that Cadillac will equip it with many driver assistance features, and Cadillac has already stated that the Lyriq will have the brand’s Super Cruise semi-autonomous driving technology. It is said to be the first truly hands-free driver-assistance feature for compatible highways. Other key safety features that are likely to be included are standard automated emergency braking with pedestrian detection, available adaptive cruise control with semi-autonomous driving mode, and available lane departure warning with lane-keeping assist.

The Lyriq will have a powertrain warranty like the similarly sized XT6 SUVs and Cadillac XT5. It is better than other premium people hauler-vehicles. At the present, Cadillac covers the first dealer maintenance visit. However, the competitors like the I-Pace provide longer periods of free maintenance. It is expected that the warranty for the Lyriq’s battery will be the same as the Chevy Bolt which has 8 years or 100,000 miles.

What Others Have To Say About The New Cadillac Lyriq

David Havasi, a longtime Tesla insider, and Zachary Shahan sat down together in a virtual meeting to watch the virtual unveiling of the Cadillac Lyriq. They posted a video of this in Youtube. You can check and see their reactions to the Lyriq in the video but here’s a summarized version of what they have discussed. But first, you should know that these two are both Tesla owners who profess love on almost everything about their cars and they come to new electric cars with critical eyes and expecting high standards on 2020 vehicle models.

Both agreed that the Lyriq has a stunning and appealing design. The exterior, its side view and clever use of lighting are impressive. David also liked the rear and it would make drivers behind the Lyriq to wonder what vehicle it is. Zachary thought that a grille comes from a different era and feels out of place among pure EVs, but in case you are going to do one, making the piece of art in front of the Lyriq, particularly when it illuminates and becomes rival to a Christmas tree, is one probable convincing way to go.

David provided some history and perspective on the Cadillac ELR which is a sporty extended-range electric coupe that General Motors manufactured on the Volt powertrain. While it was a fun and cool vehicle to drive, it still had very apparent compromises. On the other hand, the Lyriq is definitely a whole new generation of electric vehicle that is similar to a Tesla in terms of not having any real compromises. So when deciding which to purchase, it would depend on your preferences when it comes to brand and style. Both Tesla lovers were very impressed with some of Lyriq’s design elements such as the metal trim on the insides of the doors. They also liked how the screens in the back were sophisticatedly incorporated into the seats. They were also impressed with the back center console, and other elements of the SUV.

One unanswered question that both raised was: How much of the car as shown will actually make it to production? It is still uncertain if some of the elegant show features will be left out when the car actually goes into production. The number of Lyriqs that GM will produce is also not yet revealed, and a follow up question to that is: How many could GM actually produce when the demand is there?

Lyriq is definitely a combination of smoothness and clean lines. Its low roofline conveys a sense of agility while still appearing like a capable vehicle. Upon looking closer, you’ll notice it has a black crystal grille at the front which is a feature that is unique to Lyriq and you won’t find it on any of its automotive siblings. It still lacks details when it comes to power and speed but Cadillac promises the Lyriq will offer a “thrilling performance”.

The Lyriq is the first vehicle to reflect GM’s bid, Cadillac’s parent company, to revamp its Chinese line-up to focus more on electric vehicles and smart-driving technology. Julian Blissett, President of GM China, has told Reuters that it would refresh its focus on luxury Cadillac and will make bigger but greener SUVs. They will also target entry-level buyers by offering low-cost micro electric cars.

It is a must for any brand going forward to be part of the electric vehicle space. General Motors have pioneered in that space with the early EV1 and Chevy Volt, and then later the Cadillac ELR and current Chevy Volt but despite being the first, the large carmaker has found itself in an unlikely position of chasing rivals.

Cadillac has promised that it will join the already saturated arena of true electric cars or plug-in models. It is already populated with high-end rivals. With consumers being more open to owning an electric car, it’s definitely a must for GM to have a ground. The focus on a modular platform that can serve as a foundation for several models going forward tells something about the efficiency of production and long-term commitment to this expanding segment. However, the 2023 model which will be available on the market in late 2022 feels like a long time away.

According to Consumer Reports, the Lyriq follows the trend for upscale electric SUVs like Audi and Jaguar which highlight style and sportiness. It also shares similar proportions and shape to Faraday Future FF 91 which is another luxury EV concept.