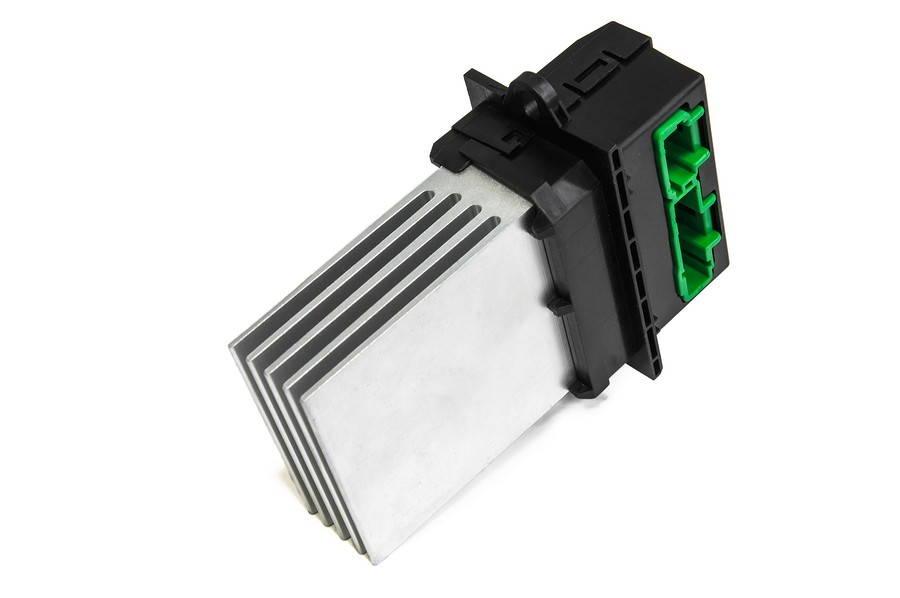 If your car is having trouble with its blower motor resistor, it's good to know exactly what that part is, where it is, and why it might be giving you trouble. We'll walk you through exactly what the blower motor resistor is and some of the most common problems that drivers experience with this part. We’ll also detail what you can do about fixing it and what you can expect to pay to get the job done.

What is a blower motor resistor?

Anytime you turn on the heat or the air conditioning in your car it works because a fan blows that air into the cabin where you are. It's one of the most easily taken for granted systems in your car because it seems relatively simple. After all, a fan is an uncomplicated piece of machinery as far as most of us are concerned. Push your button until some metal blades spin, and a breeze is created. It's not too hard to understand at all.

The same basic principle is what's behind how the air gets circulated in any vehicle. Behind those vents in your dashboard there is a blower motor that comes on when you need the heat or the air conditioning to work. Usually it's located in the dashboard on the opposite side of the steering wheel. You can't see it because it's inside the vehicle, but that's where it is located.

The blower motor resistor is the part of the blower motor that controls the speed. As you turn up the knob on your air conditioner, the resistor tells the blower motor to increase the speed and blow more air. Turn it down and the opposite happens. It's an electrical component and it works by sending electrical signals that correlate to the information you send by adjusting the dial. The electrical signal increases or decreases, and that affects the overall motor speed of the fan. As far as electrical systems go it's simple but as you can imagine if something interrupts that flow of electricity then you can potentially have a problem.

Blower motor resistors are susceptible to a handful of problems that will affect their performance. For instance, moisture can get to a blower motor resistor and cause it to corrode. A corroded blower motor resistor can't regulate the current properly, and in turn will be unable to send the correct signals to the blower motor itself. That means potentially you will lose the ability to either increase or decrease the power of the fan. And in the worst-case scenarios it will send no signal at all and your fan will simply not work.

Aside from corrosion it could simply be mechanically damaged such as if you got into an accident and the resistor breaks in some way.

What are the symptoms of a bad blower motor resistor?

There are a handful of signs that the blower motor resistor has gone haywire in your car. Sometimes the symptoms overlap with issues in other systems in your car so you may need a professional to help you diagnose them. These are some of the most common things to look out for.

Often a bad blower motor resistor can be diagnosed with a visual inspection. As we said, this part is located behind the dashboard on the passenger side of the car. In some models that could be reached through the glove box, but in others the dash would need to be removed entirely to get to it. For that reason, it is not always easy for someone to manage this task at home. Once you do get access to it though if you're lucky you'll be able to see right away if the part is corroded because if that is the problem it should be immediately apparent just by looking at it.

If corrosion is not the problem, then another way to test to see if the blower motor resistor is malfunctioning would be to attach an ohmmeter to it and measure the resistance. It should read at 4 to 5 ohms if it's working properly. If it gives another reading, such as an open circuit, it means that the resistor has failed and needs to be replaced.

How much does it cost to replace a bad blower motor resistor?

A blower motor resistor is not one of the more expensive parts to replace on a car. Head over to AutoZone right now and you'll find a wide selection of blower motor resistors that start as low as $12 and can range up to $50 or $60. As far as car parts go, that's not too bad overall.

The labor costs associated with repairing and replacing the blower motor resistor are obviously going to vary depending on what part of the world you live in as well as the make and model of the car you drive. If you drive an older vehicle, or something that is a little rarer, then you're going to have to expect that the repair costs are going to be higher than the average for you. If you've ever had to get something repaired and gotten estimates from shops around town, you've also noticed that one mechanic may charge nearly twice as much as another mechanic for the very same job. It really depends on the nature of the work, and who's doing it.

All things being equal, repairing and replacing a blower motor resistor is not nearly as complex as replacing a blown gasket head, for instance. You can expect to pay in the neighbourhood of $50 to $150 in labor fees plus the cost of materials to get this part fixed.

Can I fix my blower motor resistor myself?

Problems with the blower motor resistor are generally caused by failures in the car's electronic systems. If you're not completely familiar with your car's electronic systems and how they interact with one another, then it could be opening a whole new can of worms to try to get in there and fix this on your own. The result could be an even bigger problem when you're finished.

Naturally if you do want to take this job on yourself the best thing you could probably do is search out a YouTube video like this one that details in a step-by-step fashion how to fix the blower motor resistor. You can look up a guide that walks you through step-by-step, but it's much easier to do this kind of work when you can actually see the parts and see what the mechanic is reaching for, and how they're handling the replacement. Ideally you want to find a video walkthrough that deals with your exact make and model as well because the difference between a 1965 Aston Martin and a 2015 Nissan Altima are pretty much night and day.

The final word on this is that you can of course attempt to replace the blower motor resistor yourself, as the part is affordable, and the overall process doesn't require a ton of specialized parts. It's still an in-depth procedure that may test the limits of your automotive repair skills if you're not already comfortable working around under the hood of your car. Our recommendation is to leave this one to the professionals.

The blower motor resistor is a small and affordable part. Your car can of course function without it, but your level of comfort will suffer if you're not able to manage the heat and the air conditioning in your vehicle. If you're experiencing a problem with the air flow in your vehicle, you'll definitely want to get this problem diagnosed and fixed just for your own peace of mind and because you don't want it to lead to a bigger problem with your electrical system.

PrevPreviousCash For Junk Cars Ames, Iowa – What You Need To Know To Get The Most For Your Scrap Vehicle!
NextToyota Tacoma vs Toyota Tundra: Which Is the Best Truck For You?Next