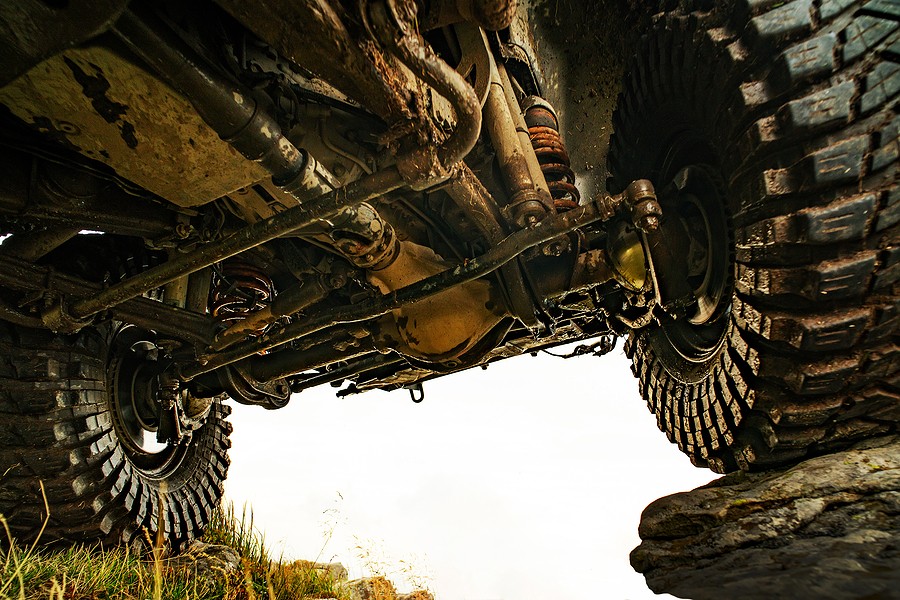 Shock absorbers do more than prevent you from bouncing around in your seat as you drive down an uneven road. The purpose of a shock absorber is actually to help keep your tires on the ground when you're going over uneven terrain so that control of the vehicle could still be smooth and easy. Your vehicle likely has both shocks and struts in it and the strut is designed to accept the whole weight of your vehicle while the shocks link parts of your suspension.

Because of the way your shocks are attached to the vehicle and the various parts included in them such as the reserve tube which is filled with hydraulic liquid and the pressure cylinder as well as a piston, bolts, and bushings there are a number of opportunities for things to go wrong. Fortunately, there are some symptoms you can be on the lookout for including some distinct noises to let you know that you have a problem with your shock absorbers.

What Are the Signs of Bad Shocks?

There are a number of  symptoms that can denote a problem with your shocks but the sounds that they make will be one of the first things that you can be aware of. In fact, there are several sounds that your car will make if they start going wrong so you might need to pay some close attention to figure out exactly what's happening.

Knocking Sound:  When you head over some bumps in the road, especially potholes, speed bumps, things like that and you hear a metallic knocking sound then that's a good sign that your shocks are worn out. Bumps will cause the coil springs to vibrate against your vehicle chassis and that's where the knocking sound comes from.

Rattling Sound:  There are a few different things in your vehicle that can cause a similar rattling sound, so you may have to rely on some other symptoms to help you piece together if this is precisely caused by your shocks. The rattle could be definitely something within your suspension that needs to be checked out if you're hearing it.

Squeaky Hinge Sound: If you ever opened a door with a rusty hinge, or at least watched a horror movie when that happens, then you'll know the sound that a bad ball joint in your suspension might make when your car is going over some bumps in the road.

Squeaking and Groaning Sounds: When you hit a bump or go around a sharp enough turn you may hear a groaning, grunting, squeaking noise coming from your vehicle. That's most likely something in your steering mechanism connected to the suspension rather than the shocks, but it will come with similar symptoms.

Other Signs of Bad Shocks

In addition to the noises that your shocks are going to make, there are some other signs that you need to be on the lookout for. Combined with the sounds, these will really help you narrow down the problem to your shocks, struts, or other parts of your suspension.

Bouncing: By far the most obvious sign that you have a problem with your shock absorbers is if they're not absorbing shocks anymore and you're finding your ride much bumpier than it used to be. The coil springs usually transfer the energy that is created when your car goes over bumps in the road. The shocks and struts control the movement of those springs so that your wheels stay flush with the road as much as they can while you stay more or less flat in your seat. When not working the way they should, your ride is going to feel a lot more like you're off-roading, even when you're not.

Body Roll: When your shocks and struts are bad you may notice that, as you take corners or curves in the road, your vehicle will lean heavily into that turn. If the turn is sharp or you take it too fast, it can make you feel like the entire vehicle is going to roll over as well. This can have a definite effect on your handling and could potentially lead to accidents if it gets bad enough.

Diving Front End: Many vehicles have struts in the front and shocks in the back. That means when you brake, especially if you're braking suddenly, the rear end of your vehicle is going to rise up, while the front-end dives down. If it gets bad enough it can be almost like a ride at an amusement park. The reverse will also be true when you're accelerating you will find that the front end goes up while the back-end squats down on you.

Leaks: There are seals in your shock absorber that protect it from leaking because, as we said, there's hydraulic fluid in there that helps it get the job done. If the seals begin to leak, you're going to have fluid running down the sides of your shock absorber and pooling on the ground beneath your car. If enough fluid leaks out, the shocks will be rendered essentially useless.

Bad Braking: If you step on the brakes and it seems like your car is taking longer to slow down then you're used to this could also be related to your shock absorbers. The length of the piston rod will not be taking up fast enough and the result is your vehicle needs to take more time to come to a stop than usual.

Tire Wear: Since shock absorbers are responsible for keeping your tires on the road as evenly as they possibly can, when they're not able to function properly then your tires won't be on the road properly either. That could mean that as your car is bouncing some of the tires on your vehicle are keeping contact more frequently with the road than others. The results of that over a long enough timeline will be uneven wear on your tires.

What Does it Cost to Replace Shock Absorbers?

The shocks and struts in your car typically last between 50,000 miles and 100,000 miles. As with many parts of your car, this very much depends on how you drive. If you're a very careful driver who stays under the speed limit and never goes off road you can likely expect that your shocks will last you a very long time. If you like to go a little bit fast behind the wheel and take some bumpy roads, then your shocks will definitely have a bit of a shorter life span to them.

Most cars have struts for the front of the vehicle while the shocks are actually in the back. That's not true of every car however, so you'll need to check out your owner's manual or Google the make, model, and year of the vehicle you're driving to find out for sure. You might have shocks on all four wheels or a combination depending on your suspension.

Whatever your vehicle uses to keep your ride smooth and vibrations down to a minimum it's usually a good idea to replace everything in pairs. This is true even if the shock on the right side is perfectly good and the shock on the left side has been damaged. You need to keep them exactly balanced so it's never a good idea to only replace one at a time.

The average cost for a pair of struts is probably going to be somewhere between $400 and $900. As you can see on autozone.com the cost for a single strut tends to start at about $100 a piece. When you double it up and include labour costs, that's where your higher costs begin to come in.

Should I Replace All 4 Shocks at the Same Time?

As we said, you always want to replace your shocks in pairs but that doesn't necessarily mean you should replace all four of them at the same time. The only real reason you should replace all four at the same time is if you are having problems in both the front and the back. Even if it's just one in the front and one in the back you're going to want to replace all of them as we said to keep things even. However, if the problem is limited to either just the front or just the back, there's no sense replacing the other set especially given how much money is going to cost you to get the job done anyway. Like the old saying goes, if it ain't broke don't fix it.

Can I Replace My Own Shock Absorbers?

Since the cost of replacing your shocks and struts when it comes to labor can be extremely high, you may be tempted to do the work yourself. You can probably save up to $300 or $400 for doing this work yourself. It's not the easiest home repair job so if you don't have a lot of experience doing car repairs on your own, you may not want to start with this one. However, if you've done a few other repairs in the inner confidence in your abilities then you may be able to handle replacing your shocks and struts on your own.

Luckily, we live in an age where many very skilled mechanics have their own YouTube channels and will put out videos showing you how to do just about any repair job you can think of. You can check out a video like this one to figure out how to do your shocks and struts if you've never done the job before as it will walk you through the process in a clear and easy-to-understand way. This makes doing repair jobs you've never tried before a lot easier and can boost your confidence if you're not 100% sure exactly what you're doing.

What Happens If I Don't Replace Bad Shocks?

You can suffer more than just a bumpy ride down the road if you don't get bad shock absorbers replaced. Your stability and performance is going to suffer as a result of not getting your shocks and struts repaired. If it gets bad enough you're going to see an effect on your ability to stop in time to avoid potential dangers as well as extreme difficulty keeping control of your vehicle. Not to mention that if you don't get bad struts and shocks replaced it's going to cause excessive wear and tear on your suspension as well as potentially your brakes and steering. The longer you put a repair like this off, the worse it's going to get for all the rest of your vehicle and the more likely you are to suffer not just more damage to your vehicle but accidents in the long run as well.

The shocks and struts in a vehicle are one of those components that has a two-fold purpose that you really can't underestimate. Not only do they protect many parts of your vehicle and suspension they also keep you feeling comfortable when you are driving as well, and it's important that your car doesn't just function properly, it's actually enjoyable otherwise you wouldn't want to be in your vehicle in the first place.

When you notice that you're having a problem with your shocks, it's best to get them taken care of sooner rather than later so you can continue to enjoy a comfortable, safe ride.