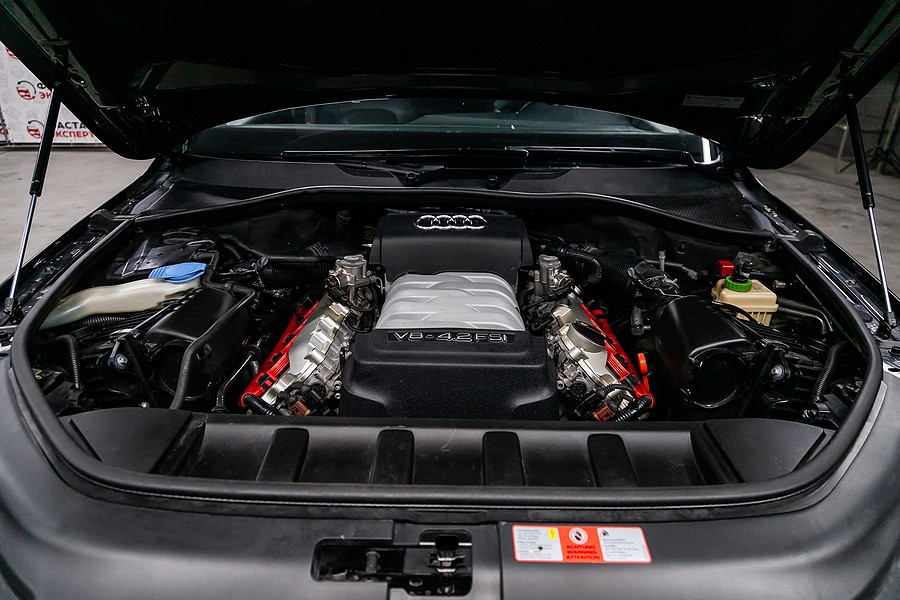 If you need a more extensive repair, an engine replacement will cost between $2,500 and $4,000 on average for your Audi engine repair cost.

There are many engines used within popular Audi cars on the market today. The Audi engines’ construction and specifications can alter the total Audi engine repair cost and the severity of issues you may face as a car owner.

The 25 TFSI engine is petrol, a 1.0-liter engine that can produce only 95 horsepower – not a very powerful engine useful for sports cars or high-powered vehicles. With a top speed of 118 miles per hour, the Audi A1 uses this car. Fortunately for A1 car owners, the 25 TFSI engine is fairly reliable when compared to other choices.

Another popular engine type is the 30 TFSI, a 1.0-liter engine that produces between 109 and 129 horsepower in the Audi A1 or Audi A3 models. This engine can reach a top speed of between 126 and 130 miles per hour while going from 0 to 60 miles per hour in just 9.5 seconds. The cars that use this engine are the A3 Sportback, the A3 Saloon, and the A1.

Thirdly, the 30 TDI is a diesel, 1.6-liter engine that is used in the A3 Sportback, A3 Saloon, and the Q2. This engine can reach a top speed of around 127 miles per hour and earns nearly 64 miles per gallon. With great fuel efficiency, owners do not have to worry about a high Audi engine repair cost with this mechanism.

Fourthly, the 35 TFSI is a petrol engine that is either 1.5 or 2.0-liters and is used in the A1, A3 Sportback, A3 Saloon, A3 Cabriolet, A4 Saloon, A4 Avant, Q3, Q2, A5 Coupe, and A5 Sportback. As you can see, this is one of the most popular engine types on the market in terms of Audi vehicle usage, with the engine producing around 150 horsepower in all car models.

Although this engine type is popular, it has had its fair share of engine concerns over the years, resulting in a high Audi engine repair cost.

Fifth, another widespread engine used in Audi cars is the 40 TFSI, 2.0-liter petrol engine. This engine produces up to 200 horsepower and can go from 0 to 62 miles per hour in just 6.2 seconds in the Audi A3. Used in the A1, A3, A3 Saloon, A3 Cabriolet, A4 Saloon, A4 Avant, A5 Sportback, A5 Coupe, A5 Cabriolet, TT Coupe, and TT Roadster, this engine combines power and performance.

Lastly, the 45 TFSI is a popular petrol engine that is a 2.0-liter powerhouse that can put out over 245 horsepower and reach 62 miles per hour in just 5.8 seconds. Used in the A4 Saloon, A4 Allroad, A5 Sportback, A5 Coupe, A5 Cabriolet, A6 Saloon, A7 Sportback, TT Coupe, and the T Roadster, the 45 TFSI is widely utilized in many Audi cars. However, due to the specifications, it can be quite difficult to lower the Audi engine repair cost.

Audi has been the subject of many recalls over the years regarding the transmission, engine, and electrical system. With recalls that involve cars, SUVs, and trucks, Audi vehicles are the subject of concerns regarding the diesel emissions, faulty airbag inflators, and a high Audi engine repair cost.

Although not technically a safety recall, over 15,000 Audi A3 vehicles were recalled due to problems with the 2,0-liter TDI diesel engine back in 2008. The Environmental Protection Agency stated that the manufacturer did not follow the Clean Air Act regulations set forth for this car model type.

The 2014-2016 V6 Diesel engines used in nearly 45,000 Audi cars, such as the Q5, Q7, A6, A7, and A8 model types, did not pass inspection. Therefore, any problems experienced by these Audi models were subject to very high Audi engine repair costs and safety concerns.

Furthermore, in March of 2017, Audi recalled the 2013-2017 Audi A5 vehicles, the A5 Cabriolets, and the Audi Q5 vehicles due to engine concerns. They also recalled the 2013-2016 Audi Allroad and Audi A4 vehicles for an engine cooling fault focusing on the 2.0-liter Turbo FSI engine, causing coolant pump overheating and an engine’s increased risk fire.

The Audi A4 recall was in 2017, with Volkswagen having to recall the 2013-2017 Audi A5, Audi A5 Cabriolet, anD Audi Q5 vehicles due to the electric coolant pump that is frequently blocked with excess debris and contaminants from the cooling system. If the fuel system does not work correctly or the coolant cannot flow to other parts of the car, the engine can overheat and cause a blockage.

The Audi Q5 was recalled in March of 2017 due to issues with overheating, engine pump blockage, coolant system blockage, and an increased fire hazard due to the 2.0-liter Turbo FSI engines. If the coolant pump frequently overheats during use, it can lead to a fire hazard and a much higher Audi engine repair cost.

The Audi A3 had many engine problems with the most concerning remodel year being the 2015 Audi A3. The most common engine problems dealt with excessive oil consumption, sudden loss of power, and the car dying while driving. The average mileage of the Audi A3 engine problems typically occurs at around 2,600 miles, with car owners stating that the oil light comes on at a very low mileage – typically at below 4,500 miles.

Owners of the 2015 Audi A3 state that the car uses a lot of oil and the internal engine of the car frequently runs hot, causing a very high Audi engine repair cost.

The model year of the Audi A4 with the most problems is typically 2010, 2011, and 2017 model years. The 2011 Audi A4 had various concerns with the engine, with the most common owner complaints focusing on the excessive oil usage and the loss of power while driving.

The Audi A6 has the most problems in the 2004, 2005, and 2006 model years, with the 2000 and 2004 often being regarded as the most problematic due to the severity and frequency of issues. The 2004 Audi A6 owners complain about the loud whining noise coming from the engine, the engine rough idle while stalling, and the secondary air intake sensor failing.

The 2015 Audi A8 model year has numerous problems with the interior accessories, the brakes, the suspension, and NHTSA concerns with the engine, such as the engine mechanism and the vehicle speed control. Owners of the 2015 Audi A8 complain about the car dying while stopping, the steering wheel locks during use, the engine shuts off while driving, and the car is difficult to control while driving at high speeds.

These severe problems should be immediately taken care of before they cause a high Audi engine repair cost for A8 owners.

The Audi Q5 is a problematic car that has frequent complaints for 2012, 2013, and 2014 model years. The 2012 Audi Q5 had many concerning categories, focusing on the engine, the windows and windshield, the brakes, and the AC and heater.

The engine issues with the Audi Q5 focuses on excessive oil consumption and the timing chain or engine failure. The excessive oil consumption occurs at around 80,000 miles, with the typical repair cost coming to just $940 to rebuild the entire engine. The most common complaints deal with owners stating that engine codes appear on diagnostic trouble codes, the owners must frequently change the oil, and the car overheats during use.

The worst problem year for the Audi Q7 focuses on the 2015 and 2017 model years, with the main categories of concern focusing on the electrical system, the engine, and the braking components. The engine problems deal with maintenance concerns, steering control issues while driving uphill and downhill, and a high Audi engine repair cost.

The Audi TT has owner concerns regarding the transmission, the exterior accessories, the interior accessories, and the engine in the 2008 model year. The NHTSA also cited problems with the engine cooling system and vehicle speed control. Owners of the 2008 Audi TT stated that the car had trouble shifting between gears, the transmission seals leaked during use, and the car lost power while driving, causing a high Audi engine repair cost.

The worst model years of the Audi S4 are the 2012 and 2014 models, with 2012 having the most overall complaints about the engine, suspension, and interior accessories. The engine problems focus on the engine making loud noises while starting, excessive oil consumption, and the car running lean.

The engine noises typically occur at around 59,000 miles, while the excessive oil consumption occurs at the same mileage. These problems are quite severe, causing a high Audi engine repair cost for car owners.

Figuring out the average Audi engine repair cost will depend on what kind of car model you own. Watch out for the common problems in the Audi S4, TT, Q7, Q5, A8, A6, A4, and A3 Audi models!