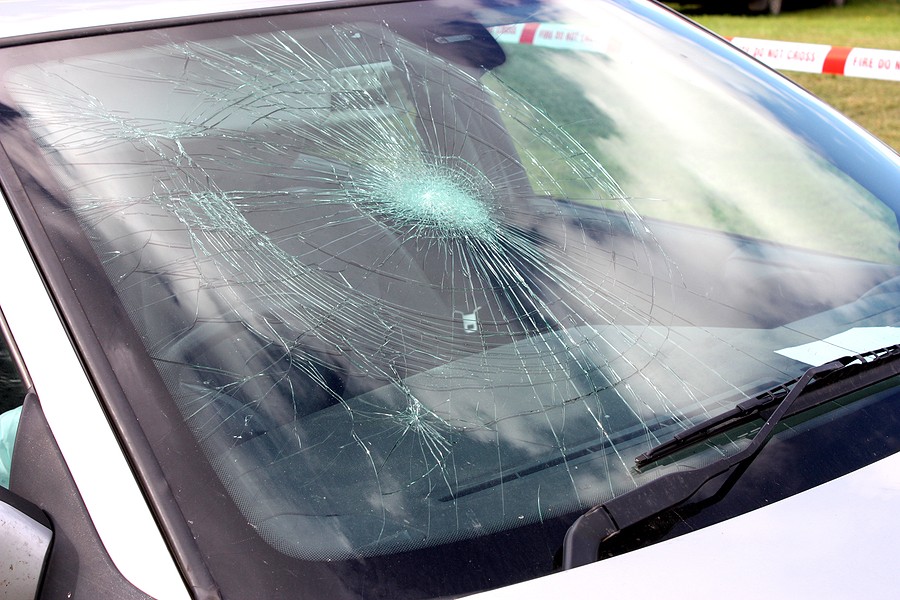 A broken car window is bad luck! The window could break because of a collision, an angry ex with a baseball bat, or in a robbery. No matter what the cause, it certainly isn’t a fun situation when the driver’s side door window is no longer operable. The average cost to repair is between $200 and $450.

Windows are a funny thing, even on a car.

We don’t pay car windows much attention until they’re no longer in service. All of the times we rolled down the window to let in the fresh air or to yell into the intercom while ordering a burger, and now, the window won’t open, close, or has been bashed in. Yikes!

Fortunately, having a broken car window isn’t really the end of the world most of the time.

Yes, there are occurrences when robbery or accidents are the cause of a broken window on a vehicle, but even then, if the only problem to resolve afterwards is passenger window replacement, you’re in luck.

Some drivers will be tempted to tape up a garbage bag to the side of the car and call it a day. Not only does this not provide much protection, it looks terrible. It might be reliable for a day or two, but the window is going to rip that plastic liner right off sooner or later. Instead, go ahead with the repair.

The first step to overcoming the overwhelm is to inform yourself about the topic. Broken car windows are more common than one might think, and so luckily, there are plenty of resources and answers for commonly asked questions such as these:

At the end of the day, you’re going to have to either move to a place where you feel comfortable not having car windows, drive around with plastic over the window (which is ugly and dangerous), or replace the window.

This article tackles some of the common concerns regarding the process and provides additional insights as to where to go from here.

How Does A Car Window Break?

If you’re dealing with a broken car window, you might be wondering how it even got that way to begin with.

Many car owners think only the windshield suffers from nicks and dings. However, it could happen to any window.

These are the common causes of broken or cracked car windows.

Accidents cause broken windows. This could be the only problem that results from the accident, but it’s not that common. For example, if you’re driving down the street and make contact with a mailbox, maybe it only smashes the window and nothing else. In other cases, the damage is worse.

If the body and other parts of the car also require repair after an accident, don’t worry so much about the windows. Worry about the entire vehicle.

Robbery is a leading cause of broken windows. We wish we lived in a world without crime and bad people, but we don’t.

If you’re prone to leaving valuables in your car, you put yourself at a higher risk of what is commonly called a “smash and grab.” Not only do you need a new car radio but a window, too.

This can be avoided by making smart moves. Lock the car. Park it in well-lit spaces or garages. Don’t leave expensive items like purses, computers, and smartphones on the front seat, not even for a quick trip. You never know when crime will strike!

Random past damage can lead to a weak glass structure within the window! Maybe you’re not so good at science, but understand this: windows can be broken before they break.

Let’s say one day a child hurls a huge rock at your window, but it doesn’t break. That was lucky, you think.

Later, your partner enters the car, slamming the door the way that they always do it, and the glass comes crumbling down. How could this be? The structural integrity of the glass was damaged in the past, and all it takes is one big bang or a hot summer day to cause ruin the window for good.

Debris on the road breaks windows, too. This is one of the most obvious ways a car window can be broken: a flying piece of debris makes impact with the glass on the road. This is especially dangerous on busy and fast routes. A spiraling hubcap off a big truck could take out that window at any moment.

If you can’t take the heat, get out of the kitchen. The hot weather can damage the window, too. The windows are treated for weather and climate situations, but if there is already a problem with the glass, the sunlight could seal the deal.

We’re off track. Some automobiles are notorious for having bad windows. The glass slides of the track or the window buttons don’t work. If the window is misaligned, it could slip, causing it to break or crack. Another way the car window could be damaged is by colliding with some object on its way back up.

What are Car Windows Made Of?

Vehicle glass is a category in and of itself, one people should know if they find themselves researching how to handle a broken car window.

Glass is used for side windows, rear windows, windshields, and overhead windows.

This glass is known for breaking in such a way that the edges aren’t that sharp (containing fragments). Some of the pieces of glass use channels to avoid it. The back windshield is built out of two pieces of glass, separated by a vinyl layer.

Most car glass is tempered for safety reasons.

If your car window breaks, you will choose between two replacement types: OEM (Original Equipment Manufacturer) or Aftermarket.

Is quality a concern? It may be. It depends on the make, model and year of the car as well as the production line that makes the piece.

What Do You Do When the Car Window is Broken?

A broken car window can be an overwhelming discovery to make.

First, stay calm. It’s frustrating, scary, and annoying. However, a little problem solving will come in handy quickly. You’re going to have to make some phone calls, and you don’t want to be too excited when talking with the professionals. If you are, it might be hard to focus.

Don’t touch anything! Begin with a documentation. If there was an accident, take pictures. Get the names and number of everybody involved, including witnesses.

Take notes on what’s gone. If somebody smashed your window to steal the car radio, be ready to include that information in a police report.

Call the police if a crime or accident has occurred. If your car window busted without a cause that warrants calling local authorities, skip this step.

You may want to locate the important documents that relate to the car: insurance, driver’s license, and owner’s manual.

If your personal information was stolen (from your wallet or purse), then you will need to contact the bank and other institutions to alert them of the situation.

Check with the insurance company to see if you have a valid claim. Perhaps the costs of the repair will be covered. You can only know if you ask.

Arrange for a tow truck if you won’t be able to drive the car in its current condition.

If the window is broken because of a car accident, this situation will look quite different. Unless the only part of the vehicle that was damaged were the windows, then perhaps you should contact the police and insurance company for further advice.

If the car is totaled, or damaged beyond reasonably priced repair, replacing the window won’t really do much.

How Much Does It Cost to Replace a Broken Car Side Window?

The cost of fixing a broken car window can vary on several factors.

Fun fact: Did you know that the windshield is the most likely window to require repair?

Side windows, however, also are known to require care as well.

The standard side car window costs, on average, about $350 to repair, according to some local mechanics. However, there is some diversity in the prices one may find in the market where they live.

Can I Fix my Broken Car Window?

Some people opt to make this a DIY project by finding a replacement window at the local junkyard. This could cost $20! If you decide to take the request to an auto parts store or dealership, you could be charged for the replacement glass and install it yourself.

It’s tempting to want to save a bit of money on these pricey repairs, especially when funds are tight, but you could end up paying more in the long run if the work isn’t done correctly. Around here, we rarely recommend taking car repair into your own hands unless you are a licensed and certified mechanic.

You will have to complete several steps that may pose a challenge for someone who is inexperienced: removing the door panel, searching for glass pieces within the mechanisms, testing the regulator, and of course, replacing the door panel once again.

If the window is electric, it could be even trickier!

Are there 24-hour Auto Glass Repair Services Near Me?

In large cities, you may be able to find the services required to fix a broken car window 24 hours a day!

This is good news if you are somebody who likes to respond quickly to problems or you have to deal with street parking in the middle of a rainy spring. Like plumbers, paramedics, and police officers, the auto glass technicians you need are just one call away.

In smaller towns, however, this may pose more of a challenge. You might have to line the window with plastic until the garage opens in the morning. If you’re not sure where glass services are offered, try an Internet search, asking your local garage, or the yellow pages.

Seeing Clearly in The Future

Visibility is important when driving; you have to be able to see where you’re going and who is behind you. If a broken window is making this difficult, you could have problems staying on track with your route.

The same can be said about having a broken car window – if you can’t maintain your focus on the task at hand, navigating the situation will be that much more challenging.

Others, it’s an indication that it’s time to kiss that old car goodbye and send it to the junkyard. If your car windows are all broken, and the car is old, requires a lot of repair, or has a ton of miles on it, then perhaps the junkyard call is in order.

If not, get ready for a quick and orderly repair. You’ll be back on the road before you know it.