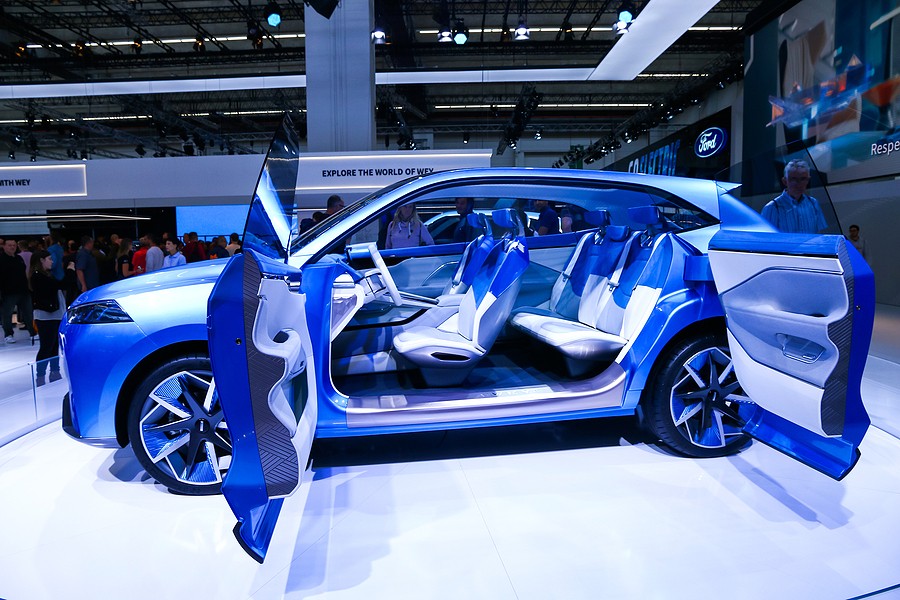 Suicide doors typically refer to door hinged at the rear that open outwards in the different direction of conventional doors. Rolls-Royce’s entire lineup is famous for having cars with suicide doors. They are more common in concept cars though.

The Suicide door origins can be traced back to the first half of the 20th century in the early years of the automobile. At the time, horse-drawn carriages were common since the car was still a very expensive niche that only the wealthy can afford. Carriage designers usually derived inspirations from architecture and other modes of transportation.

Back then, French style doors (where two adjacent doors open outwards from the middle with doors hinged on either end of the door frame), were common in mansions and big houses. These doors were associated with higher class and designers wanted these to be reflected in their designs to signify a status symbol so they built doors with a similar mechanism to French doors.

The French Door style was carried over to cars built in the early twentieth century still as a status symbol which signifies wealth because then the automobile was very expensive and reserved to those who belonged to the upper class. But why are they called suicide doors?

Doors hinged at the rear got its nickname “suicide doors” due to its several design flaws that could cause harm or even death to the occupant. When these doors were opened, the one exiting or entering the offside of the door had a high probability of getting hit by a passing vehicle. Also, these doors were very common during the time where seat belts were not prevalent so the chances of falling out while opening up the door were greater.

Which cars have suicide doors?

Car manufacturers rarely market them as suicide doors because of the morbid nature that the term suggests. There are only six 2019 model year cars that have this feature. Here is a list of cars with suicide doors for 2020:

The most noticeable change for this special edition is the six inches addition to the wheelbase (all coming in the rear passenger side). The rear doors and windows, and roof are longer. The rear doors have the same type of e-latching system like the typical Continental but they open 90 degrees from the rear. The Lincoln Continental Coach Door lets the rear seat passengers open the doors independently but there is no electronic open and close assist like what the Rolls-Royce Wraith has.

The backseat is the highlight in the interior of the anniversary edition, and the 6-inch stretch gives this car the most legroom in its segment. It also has a flow-through center console in addition to the tray tables and wireless charging. All these give its passengers luxurious accommodation.

A custom plaque is fitted to the interior to the owner’s spaces and special door-sill plates are affixed to the back. Lincoln only produced 80 of these and they were immediately sold out in just 3 days after it was launched. Because of its success, Lincoln decided to bring back its coach doors edition on the 2020 Lincoln Continental.

The Cullinan is Rolls Royce's first SUV and as you can expect from this ultra-luxury brand, it comes with an expensive price tag, at a starting price of $325,000. It comes with rear-opening coach doors and two-position backseat decked in Arctic White leather and Black Lambswool carpet. You have the option to add a third seat if you select the lounge configuration upon order, but that also means you won’t have the center console armrest including essentials like champagne fridge and whisky decanter.

You’ll sure have a comfortable ride and an ultra-luxurious driving experience. This SUV offers a smooth ride with excellent isolation from the road. It is also quiet which is impressive considering its twin-turbocharged 6.75L V12 engine.

And being an SUV you expect it to offer extra utility and the Cullinan offers something extra special with its viewing suite, pretty fancy for tailgating seats. At the push of a cargo-area button, you’ll have cocktail tables matching your two-seat leather bench.

The 2019 Rolls-Royce Dawn allows consumers endless personalization options though there are some general preset configurations. You only have to make sure you get the camera system so you can park easily. It is also highly recommended for you to get the Ultimate Touring package as it offers a full suite of driver assist features and combination of ventilated seating, and the Signature package with its premium audio system, lambswool floor mats, and monogrammed headrests.

When it comes to driving, this Rolls-Royce provides a smooth driving experience and a comfortable ride. This convertible four-seater could fit in four adults in real comfort and the top opens and closes in complete silence.

The interior is very luxurious with its leather and wood. It’s warm, inviting and comfortable. You’ll feel like you’re in a tearoom or a cigar lounge. The coach doors make entry and exit an event. The cargo space is deep and ideal for a couple’s luggage. However, it might not be spacious enough to accommodate luggages of four people unless you are light packers. It also includes an umbrella and silk-lined pockets are ideal for holding delicate stuff.

It does not have a touch screen but the touch surface above the Spirit Ecstasy Rotary Controller has handwriting recognition. Other than that, it has all the staples of a luxury car like adaptive cruise control and night vision.

This car is the definition of luxury and spirited driving. The interior features leather seating and handsomely crafted wood veneers. Rolls-Royce Ghost is powered by a twin-turbo 6.6L V12 with 563 hp mated with a satellite-aided gearbox. This configuration makes use of GPS data to identify the roadscape ahead of you, be prepared and adjust transmission gears accordingly.

The Ghost features the rear-hinged door which gives you that extra special entry or exit. This car comes in a short or long wheelbase. This car is so fancy that it is meant to transport upper class to and from red carpet events and 5-star hotels. Aside from luxurious cabin materials, it can also be outfitted with a headliner replicating a star-studded night sky. It also comes with two 9.2-inch screens which complete its rear-seat theater system. The night-vision camera combined with the head-up display ensure that the driver is less distracted and alert.

This car caters to multi-millionaires with its ultimate luxury. With over 100 years of making the most desired and luxurious cars, Rolls-Royce can definitely claim to be on top when it comes to class and refinement. It is the top-of-the-line among the five models in the brand’s lineup, and has a starting price of almost half a million dollars.

The Phantom is a stately large sedan that by history is intended to be driven by a chauffeur. The interior features the finest materials available and is completely quiet, even when driving at excessive speeds. Its closest rival is the Bentley Flying Spur.

The 2019 Phantom comes in two versions: the standard Phantom and the extended wheelbase version. Both models are equipped with a turbocharged 6.75L V12 with 563 hp and 664 lb-ft of torque. This engine is mated with an eight-speed transmission.

Dubbed as the most powerful and dynamic Rolls-Royce ever, it is powered by a turbocharged 6.6L V12 that sends 624 hp to the rear wheels, which is 10 percent more power than the Phantom and Cullinan. But when it comes to being the most dynamic, it might not live up to expectations as it is based upon the Ghost limo so the chassis is not really athletic, though the rear axle has been widened and the wheelbase is shortened.

The Wraith’s suspension has been tuned to reduce body roll and subtly enhance feedback when cornering. The steering weight is lighter at low speeds and becomes heavier at high speeds. This adds to the spirited drive of this Rolls-Royce.

It may be the most sporting Rolls ever, but that does not compromise its luxury. It comes with four finely proportioned seats, high quality materials across most surfaces and generous headroom and legroom even at the back. The Wraith is a good choice if you want a two-door coupe Rolls-Royce.

What classic cars have suicide doors?

During the first half of the 20th century, cars with suicide doors were common. It is particularly popular among mobsters in the 1930s– “the gangster era.” It was said to be due to the fact that it was easy to push passengers out of a moving car with air around the moving vehicle holding the door open.

The use of suicide doors became limited to rear doors of 4-door sedans after Word War II. The Lincoln Continental 4 door sedans and convertibles (1961-1969) and Ford Thunderbird 1967-1971 4-door sedans were the most popular American vehicles with suicide doors after World War II. On other parts of the workd, suicide doors were also used in the British Rover P4 until their demise in 1964, and in German Goggomobil coupes and saloons which had 2 door bodies with rear-hinged doors, until they were changed to front-hinged in 1964.

The golden age for American luxury sedans was the 1960s. One of the era’s most long-lasting icons has been the 4th gen Lincoln Continental, thanks to its timeless styling and unmistakable proportions that would influence premium design cues for decades. Among the last 4-door convertibles sold in the United States is the 1961-1969 Lincoln Continental, and is also one of the last cars to come with suicide doors till they made a comeback in the Rolls-Royce in the 2000s.

It is no wonder Continental is highly desired by collectors seeking a comfortable and relatively affordable classic luxurious ride. The 4th gen Lincoln was the sole vehicle made by the brand during the 1960s and it can be classified into three distinct versions: 1961-1963 models featuring soft-edged contours, 1964-1965 models with their mild styling updates and a lengthier wheelbase, and 1966-1969 vehicles, introducing a pair of new drivetrains and fresh body.

During this reign of the Continental, four-door sedans were offered every year, with a four-door convertible available from day one until the end of 1967, and a 2-door coupe made available in 1966. During this period, there were a total of 334,345 units made.

For 1967 the Thunderbird became a bigger car, making it closer to Lincoln as the company decided to highlight the luxury part of the personal luxury car designation. Ford decided to do away with the traditional unibody construction for this bigger car. The convertible, steadily slowing down in sales, was dropped to make way for a four-door model that comes with suicide doors. It stayed in the lineup through 1971, however, it never produced significant sales.