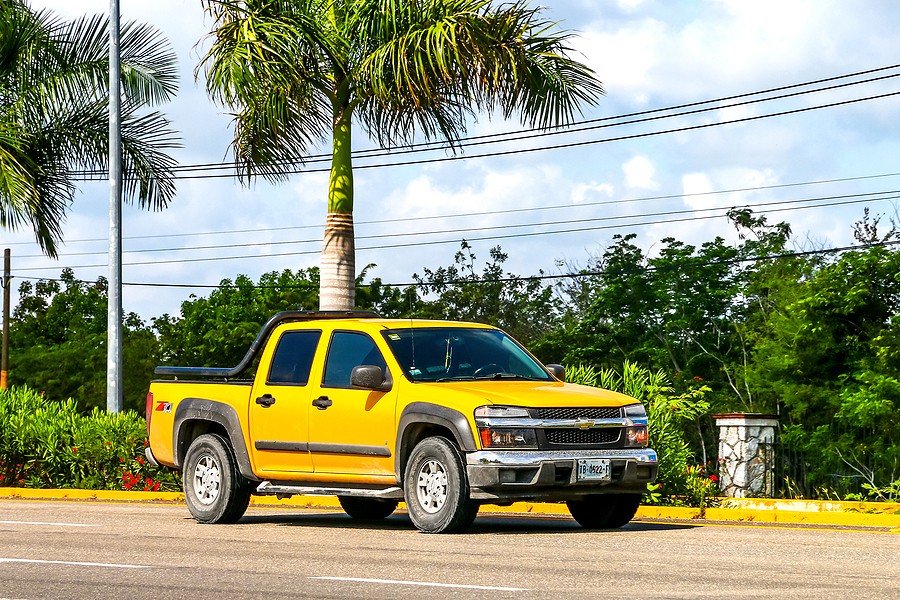 The current, 2nd generation, Chevy Colorado was first introduced for the 2015 model and it officially marked GM’s comeback to the midsize pickup truck category. Ever since it was introduced, the Chevy Colorado has earned its way to the top 2 seed as the best-selling midsize truck, until the new Ford Ranger overtook its place with Colorado stepping down to the third place. Many were hopeful that GM would give the truck a revamp but that did not happen. Instead, Colorado only got minor changes and updates.

The mid-size 2021 Chevrolet Colorado pickup and the GMC Canyon, its corporate sibling, offer daily practicality and lots of capabilities including considerable towing. They are also much easier to drive than their full-size sibling. The Colorado comes in three different engines which includes a diesel four-cylinder and a V6 engine. The truck is able to maintain a pleasant driving experience and athletic handling. But the interior is not as pleasant being overrun with cheap plastic materials and having a small back seat even ones with the biggest cab size. Also, several modern driver-assistance features are lacking though Chevrolet ensures all models have a modern infotainment system. So while the 2021 Chevy Colorado offers enough to match a handful of pickup buyers, it lacks features to attract more prospective consumers.

The 2021 Chevrolet Colorado does away with the entry-level trim which means the Work Truck Trim is now the base trim. The rest of the other trim levels remain which includes LT, Z71 and ZR2. Those anticipating a high-end LTZ or High Country model will be disappointed since you won’t find it in the 2021 model year.

The most significant change for the latest Chevy Colorado is a slightly-redesigned front fascia. The WT, LT and Z71 trims sport updated lower fascias, center bars and skid plates. ZR2 features a new front fascia that looks edgier than before and at the same time offering drivers enhanced visibility. The redesigned front ends also sport new Chevy emblems: A brand new gold Chevrolet bowtie logo for WT and LT. A black bowtie logo for the Z71. And lastly, the ZR2 sports a “CHEVROLET” lettered grille with the “flowtie”, which used to be included on the ZR2 Bison.

On top of all that, the Colorado ZR2 now sports red tow hooks as standard equipment. The rear of every 2021 Colorado trim level now sports embossed “Chevrolet” tailgates which replaced the traditional Chevrolet bowtie.

Changes to the wheel and tires include:

A 17 by 8-inch steel wheel and tire replaces the 16 by 7-inch steel spare wheel.

On the inside, an auto-dimming rearview mirror is being added as a standard feature on LT trims. It used to be an optional feature on previous model years of the LT trim, with the manual day/night mirror as the standard on LT, Work Truck and base trims. The LT trim also gets a new audio system which is the Chevy Infotainment 3 system with an 8-inch diagonal color touchscreen, Bluetooth audio streaming for 2 active devices, AM/FM stereo, voice command pass-through to phone, Android Auto and Apple CarPlay. The rest of the Colorado’s cabin stays the same as in previous years.

The Chevy Colorado is no doubt popular in the segment it belonged to, but its subpar interior quality and lack of modern driver assistance features made it less desirable. Hence, it is recommended that the trim you should pick is the one that sets Chevy apart from other midsize pickup trucks–the loaded and wide-bodied ZR2. It may be the most expensive model, but it offers exclusive equipment including electronic locking diffs on both axles, exotic spool-valve shocks plus one of the edgier front ends you’ve seen on a modern truck. Go for a crew cab setup as it has bigger back seat and stick with the standard V6 engine instead of the more expensive diesel option. The exterior paint would depend on your preference. It is also recommended to get the Power Package for its performance air intake and cat-back exhaust.

The 2021 Chevy Colorado has a powertrain for everyone. It comes with a base four-cylinder paired with a six-speed automatic transmission (the six-speed manual has been deleted), a speedy 308-horsepower V6 paired with an 8-speed automatic, and it also has a diesel in the form of a 2.8-liter four-cylinder, making an amazing 369 pound-feet of torque. The base 2.5-liter 4-cylinder is underwhelming and grumpy, but the V6 and diesel are impressive. Both can serve its owner well. The V6 engine is more powerful than the diesel engine, but the diesel does well in towing, fuel economy, and backcountry trekking.

The default setup of the Chevy Colorado is RWD but an all-wheel drive setup is available as an option. You just need to pay some premium in addition to the trim’s MSRP.

Fuel Economy of the 2021 Chevy Colorado

The latest Colorado offers a spacious cockpit like what you would expect in the front seats of a full-size truck. Overall, the interior of the Chevy Colorado offers convenience and comfort. Heated front seats, a heated steering wheel and leathers are available as options. However, getting more than two people in the rear seat can feel cramped and the interior material feels dated and cheap. Under the crew cab’s rear seat you’ll find a massive compartment, providing a decent amount of cabin storage. The Colorado also has a deep center-console bin.

But the interior of the 2021 Colorado cannot accommodate as many carry-on suitcases as the Honda Ridgeline, only holding 11 suitcases compared to Ridgeline’s 18. But it can carry more stuff in either of its too massive cargo beds. The Ridgeline’s max of 34 cubic-feet pales in comparison to Colorado’s 41-cubic-foot short box and the 50-cubic-foot long box. The Toyota Tacoma offers more volume than the Honda at 38 cubic feet in its short bed version and 47 cubic feet in the long bed. Still, the cargo-bed winner is the Chevy Colorado.

Infotainment and Connectivity of the 2021 Chevy Colorado

The 2021 Colorado features two intuitive touchscreens, a Wifi hotspot and the Chevy Infotainment 3 Premium system which makes it near the top of the class in terms of infotainment features. The base truck now comes with a 7-inch touchscreen with Apple CarPlay and Android Auto capability, and Bluetooth. The rest of the models come standard with an 8.0 inch display which features attractive menus and responsive touch functions. A built-in navigation to make it easier for you to find destinations is available as an option. The Colorado also offers available wireless charging to keep your devices going plus you can make your road trip more enjoyable with the available Bose premium audio system.

Warranty and Maintenance Coverage of the 2021 Chevy Colorado

To unlock the Chevy Colorado’s maximum towing capacities (7,000 pounds for the V6 engine and a 7,700 pound-towing capacity for the diesel model), you would need to get the Trailering Equipment package. The base Colorado with the 4-cylinder engine can tow up to 3,500 pounds. Trailer-sway control comes standard on every model. It applies the brakes of both the trailer and the truck if the system detects the former is swaying too much.

Because of the ongoing pandemic GM has delayed various updates, pushing back the 2021 Traverse and 2021 Equinox to the 2022 model year. The good news is GM has confirmed that the 2021 Colorado will push through with its launch in spring 2020. Considering that the GM Wentzville factory in Missouri is currently idled due to COVID-19, it is still not clear when the 2021 Chevy Colorado will actually arrive on the market.

On a number of occasions from 201-2017, the Chevy Colorado has gotten several complaints due to transmission issues while downshifting.

Should I consider buying the 2021 Chevy Colorado?

The current gen of Chevy Colorado is already one of the top-rated in its class in many aspects so Chevrolet has not done much revisions for the 2021 model year aside from the aesthetic tweaks on the new Chevy trucks. Despite the minimal updates, the latest Chevy Colorado is still worth looking into as it remains one of the most versatile midsized trucks in the market.