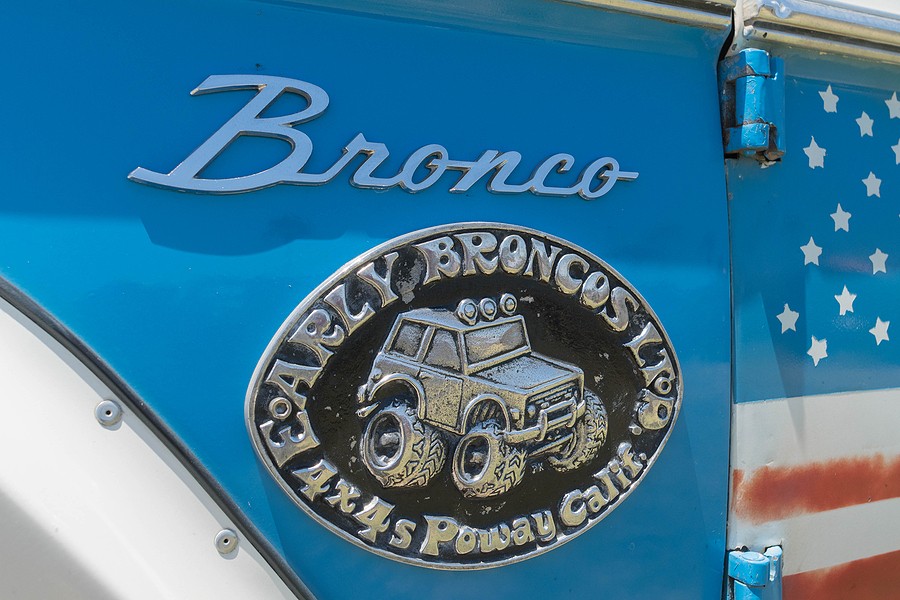 The Bronco is officially back after 24 years with a classic two-door and first-ever four-door, all-4×4 line up of rugged off-road vehicles. Although it is not the 1966 Ford Bronco two-door off-roader the DNA from that iconic model is present in the modern take of the Bronco 2 and Bronco 4, including the Bronco Sport, which is a comfier, smaller and cheaper take designed to be a capable off-roader and everyday user friendly vehicle.

The 2021 Bronco Ford recently unveiled has the retro aesthetics but with the latest engineering and smart off-road technology  coupled with functional design and  innovative customizable features to help off-road enthusiasts make the most of their adventures even in the most remote parts of the world. Dealers will be able to provide outfitting-on-demand for each of their client’s individual adventure needs as Bronco owners will be able to make maximum personalization having the freedom to choose from a broad lineup of more than 200 factory-backed accessories.

There are 11 exterior colors in total for both Bronco 2 and Bronco 4 models which consists of three warm hues, a blue hue and a couple of neutral tones. The option for colorful paints like Cyber Orange and Antimatter Blue appeals to fashionable car buyers, Other colors include Shadow Black, Rapid Red, Race Red, Area 51, Antimatter, Carbonized Gray, Iconic Silver and Summit White.

TechCrunch’s Matt Burns has reported that “Ford is going to use the old Bronco to sell the new Bronco, just like Nintendo uses past games to sell new games.” So although the 2021 Bronco 2 is clearly modern and new especially once you look inside it would still be hard to miss that its inspiration came from the first generation 1966 Ford Bronco when looking at its retro boxy exterior.

The Bronco 2 and 4 models have a wide stance, distinct edges, square proportions, flared fenders and short overhangs that not only make the vehicles perfect for off-roading but also make owners nostalgic of the original design. And as mentioned earlier Ford has come up with various ways to be able to customize the Bronco 2, Bronco 4, and even the Bronco Sport.

Ford will be offering seven versions of the Bronco 2 and Bronco 4, with color and trim combinations to match. There will also be 4 content packages along with all the paint choices. The options touch base with the no-frills version and extends to the Wildtrak and Badlands trims for the more extreme off-road adventurers. The middle choices include Big Bend, Black Diamond and Outer Banks. There is going to be a limited-production First Edition that will be offered as soon as they launch. The Bronco 2 and 4 models are designed to be configured in multiple ways. Like for example, the Bronco 2 models are coming in with a standard three-section roof system, premium-painted modular top with four sections that adds a removable panel over the rear seats and also a cargo area.

The Bronco 4 on the other hand is designed with four removable roof sections, all of which can be removed by even just a single person by simply unlatching them from the interior, to make way for the largest overall open-top view in its class either to take in the sunshine or to gaze at stars at night.. Owners will also have the option for soft or hardtops, or even both. The large open wheel wells are also made in modular design coming in with a quick-release attachment for customization.

The doors of both models are also removable and frameless, designed for easier storage in protective bags. The Bronco 4 has ample space and is large enough to be able to store all four doors onboard. All of these customizations, however, come with a price, with the most expensive trim level just below $60,000. The vehicle also comes with “trail sights” on the tops of each front fender, which are not only useful for viewing corners during tight maneuvers but are also tie-downs that have a 150-pound capacity.

Engine and Off Road Capabilities

The Bronco unfortunately doesn't come with eight cylinders. But although you only have the option for a four-pot or a V-6, they're quite strong ones. The 2021 Ford Bronco shares a platform with the Ford Ranger, which means that it includes the standard 2.3-liter EcoBoost inline-four that generates 270-horsepower with 310 lb-ft. of torque. You also have the option to get a 2.7-liter EcoBoost six-cylinder that yields 310-horsepower with 400 lb-ft. of torque. Ford has also confirmed that the Bronco will eventually offer a hybrid powertrain.

The 2021 Ford Bronco will also have a 7-speed manual as well as a 10-speed automatic transmission. The new Bronco is designed to head off-road as 4×4 standard across the entire Bronco lineup. The Bronco has a Part-Time 4×4 Selectable Engagement system as well as an Advanced 4×4 with Automatic On-Demand Engagement system.

The part-time 4×4 system has three modes plus neutral, which provides mechanically locked-in 4×4 in 4H and 4L. In selecting 4L torque increases in contact with certain road conditions like deep sand and when dealing with steep hill grades and when pulling heavy objects. The advanced 4×4 system on the other hand adds an auto mode that automatically engages to choose between 2H and 4H. While 4A is engaged, the 4×4 system fluctuates power to the front wheels for maximum performance across all on-road conditions.

The latest Ford Bronco also has 35-inch mud-terrain tires and 17-inch beadlock-capable wheels that come with its Sasquatch Package which comes standard for the Wildtrak trim and available for all the other trim levels. And if that is not enough the package also comes with electronic front and rear locking differentials, Trail Control, high clearance suspension, high clearance fender flares and a 4.7 final drive ratio. The Bronco also has long-travel dampers and a sway-bar-disconnect feature. Its up to 11.6 inches of maximum ground clearance and ability to ford through up to 33.5 inches of water makes it even more impressive as an off-roader.

The off-road capability of the Bronco doesn't end there as it also comes with Trail Control for managing off-road throttling/braking. It has Trail Turn Assist that reduces the turn radius and Trail 1-Pedal Drive for low speed crawling. It also goes with an off-road navigation with the FordPass Performance App, and Terrain Management System with 5 G.O.A.T. modes, meaning “Goes Over Any Terrain,” with 5 standard drive modes that includes Sand, Slippery, Sport, Eco, and Normal and 8 available drive modes depending on trim level. This offroader can also easily handle the sharpest drops and steepest inclines having a departure angle of 37.2 degrees, a breakover angle of 29 degrees, and an aggressive approach angle of 43.2.

The all-new Bronco is back after being torture-tested in the Johnson Valley desert, known as home of King of the Hammers. It also endured the grueling Baja 1000, which is one of the world’s toughest off-road endurance races. So you can be assured it’s more than ready for a wild rugged adventure.

The 2021 Bronco is going to be available with a suite of driver-assistance systems that include parking sensors and automatic high-beams. The Bronco also features equipment for low-speed rock crawling and equipment to make trail driving easier. Its key safety features include available forward collision warning and automated emergency braking, available blind spot monitoring and alert for rear cross-traffic, and also an available lane-departure warning and lane-keeping assist.

The steering wheel and switchgear of the 2021 Bronco are similarly chunky like the old model, but with full physical switchgear for the audio and climate control systems mounted conveniently below the touchscreen so you won't have to use the touchscreen for the controls.  Also located on the dashboard is an off-road switch pack that makes it convenient and easy to control your off-roading adventures. The buttons engage the Trail Turn Assist, hazard lights, stability control, stabilizer bar disconnect, and front-rear differential lock. Other amenities include dual smart charging USB ports, sliding visor vanity mirrors and 6 beverage holders. The window controls are also easy to locate and operate as they are mounted at the front of the center armrest.

Ford Bronco’s available removable body panels offer the same open-air possibilities like that of the Jeep Wrangler so you can enjoy the outdoors from the inside. Ford also offers a few more interior innovations not found on the Jeep like a rack built on top of the dashboard where you can not only conveniently mount smartphones and GoPros but also plugged it into nearby 12-volt outlets.

The extended-wheelbase of the four-door models have space onboard to store all four removable doors. With the exterior mirrors mounted on the base of the windshield, they still can be used even when the doors are taken off. The available rubberized flooring and marine-grade vinyl upholstery of the cabin keeps the interior protected from dirt and other pollutants while enjoying the open air. And for convenient cleaning after a day spent in the wild outdoors the floors are offered with built-in drains for hosing out.

The 2-Door Bronco will seat 4 occupants, while the Bronco 4 seats five and has plenty of elbow room.  The vehicle is also available with 60/40 split-fold-second-row seats that folds to make room for any gears. The vehicle features up to 83 cu.-ft. of cargo space.

There are choices for a durable cloth and marine-grade-vinyl seating, but if you want a fancier and cozier environment you can always opt for leather seating surfaces. The Bronco's dashboard also boasts a row of rubber switches; with an option to add an overhead set of auxiliary toggles.

The latest model of Ford Bronco has the latest in-dash Sync 4 software that will power the standard 8.0- or the available 12.0-inch touchscreen embedded in the middle of the vehicle's dashboard. The setup makes over-the-air updates possible and you will be able to connect to the cloud and user's smartphone wirelessly. The infotainment system of the newest Bronco also supports a host of modern infotainment features to enjoy, including Apple CarPlay, Android Auto, and the much needed subscription-based Wi-Fi hotspot. The unit can also be upgraded with built-in navigation and a more powerful B&O stereo where you can loop the soundtrack of your day.

There’s also an optional 360-degree surround-view suite that will not only help in parking maneuvers but can also provide you with special off-road views to help avoid close-in obstacles. Ford also came up with a Trail Map, a new software that will let you download topographical off-road maps to your smartphone so you can project them on the infotainment display. Besides being able to show the data on screen, you can also record your off-road wanderings with telemetry and mapping data, and be able to upload the recording to the cloud to share your adventure with your family and friends.

The production of the new Bronco 2 and Bronco 4 begins in early 2021, with the first models set to arrive in dealerships next spring, while the Bronco Sport is scheduled to reach dealerships later this year. The Bronco 2 and 4 models will be built at the Michigan Assembly Plant while the Bronco Sport will be assembled in Mexico. Ford has already opened up reservations, where prospective buyers can secure their spot for the much awaited Bronco two- and four-door models for $100. The First Edition units however have already sold out.