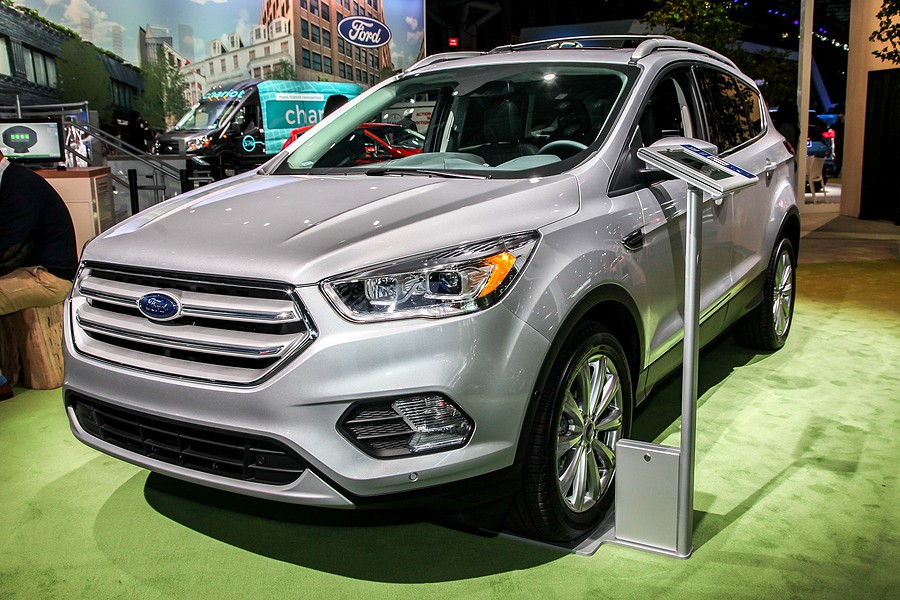 Despite the amazing features of the 2018 Ford Escape, the vehicle was plagued with many mechanical problems. The biggest ones are related to electrical issues, engine problems, and steering troubles. In some severe scenarios, the 2018 Ford Escape accelerated on its own!

If you are a current owner of the 2018 Ford Escape or a potential shopper for a used one, you need to be familiar with all reported mechanical complaints about this vehicle. This way, you can determine when it's the right time to visit this vehicle or get rid of it.

Once you understand the mechanical problems, you know exactly what to look for when shopping for a used 2018 Ford Escape.

This article summarizes our detailed analysis of all reported customer complaints to larger websites like carcomplaints.com, edmunds.com repairpal.com, and the NHTSA website. We summarized the mileage when the problem is expected to occur along with predicted repair options and repair costs whenever available.

The 2018 Ford Escape is a great compact SUV for a fun drive and smooth handling. It was described as an unstoppable vehicle, according to several automotive experts, in 2018.

This vehicle was ranked as #3 in the best 2018 affordable compact SUVs with a ranking of 8.5 out of 10 according to cars.usnews.com. The vehicle was featured for the high-reliability rating, the great handling, the powerful turbocharged engine, and the large cargo space.

When purchasing a 2018 Ford Escape, you can seat up to five passengers. The vehicle is equipped with either an all-wheel drive or four-wheel drive.

The 2018 Ford Escape comes with either a 1.5-liter four-cylinder, 2.0 liter 4 cylinders, or 2.5 liters 4 cylinder engine. The engine is equipped with a 6-speed automatic transmission and can achieve about 23 miles per gallon on city roads and 30 miles per gallon on the highway. The towing capacity of this vehicle ranges from 1500 to 2000 pounds.

Since the 2018 Ford Escape is one of those smaller SUV v's, it is getting a lot of attraction from multiple customers every year. This vehicle is dominating the roads by being one of the most popular small recipes.

Although the vehicle comes with amazing features, it was not problem-free. Several complaints were reported to larger platforms and indicated some mechanical issues related to the engine, electrical components, steering system, etc.

In some severe scenarios, 2018 Ford Escape owners indicated that their vehicle would accelerate on its own without any previous warning sign for any action done by the driver. This situation is considered one of the most difficult situations that could affect the driver’s safety.

Let's take a closer look below at some of the top reported complaints about the 2018 Ford Escape problems:

Unfortunately, the top reported problem about the 2018 Ford Escape has to do with significant engine issues.

Some customers had to deal with check engine lights frequently illuminating without any obvious reason.

Other customers and complained about engine misfiring and engine overheating. In most scenarios, all customers needed to install a new engine to resolve the problem

Surprisingly, most engine problems did not occur in older vehicles; all reported complaints were for vehicles under 20,000 miles.

Fortunately, Ford did not ignore the engine problems and released several bulletin services to address these problems. For instance, the Bolton service #SSM 47937 focused on addressing the Start-Stop system where your 2018 Ford Escape engine does not start, and it will throw a diagnostic error. If that happens, drivers were advised to revisit the crankshaft and check the position sensor.

Unfortunately, not all drivers could resolve their engine problems by visiting the existing Ford bulletin services, and therefore, they ended up installing a new engine.

Unfortunately, engine problems occur suddenly in this vehicle, and therefore, the customers do not have any precautions to prevent this from happening.

Therefore, automotive experts suggest that any owner of a 2018 Ford Escape should perform a general overall inspection of his vehicle, including the engine. It is also recommended that you in short TSV fixes before any purchase of a used 2018 Ford Escape vehicle.

“After 12000 miles of easy living, the engine block for my 1.5 liter EcoBoost is being replaced under warranty. Wow. I’ve driven various Fords since 1995 without any serious problems, owning one for 11 years. The company’s reliability has fallen apart. Now the dealer will try to rebuild the engine around the new block? That’s complicated for a local guy. What are the chances this is going to work out well? Very, very disappointed. Years to go on the loan. At least the power train warranty is long.”

Surprisingly, the second top reported complaints about the 2018 Ford Escape to do with another major component: transmission.

Most reported complaints indicated that their vehicle will throw a message saying the “transmission fault service now.”

Most customers who reported the complaint found a solution other than installing a new transmission. In some scenarios, the customers needed only to install new lateral trans wiring.

What's concerning about these transmission issues is that they occur in relatively newer vehicles. Some of these complaints were associated with cars around 3000 miles only!

There are few situations where customers indicated issues with hard shifting, but it was not the most reported problem about the 2018 Ford Escape transmission problems.

Some of the reported transmission issues about this vehicle might come gradually, while others might happen suddenly.

A good practice here is to make sure that you keep an eye and ear ready for any weird and abnormal noises and behaviors of your vehicle.

For instance, if you realize that the 2018 Ford Escape has some hard shifting issues or some weird vibrations, you need to immediately take it to a professional mechanic before dealing with a complicated problem that might end with installing a new transmission.

“I have only had this car for 2 months and the transmission was slipping and now all of a sudden it's saying transmission fault service. Now going to take it to the dealership this week and see why it is doing this.”

The vehicle was not also electrical system problems free. A good number of complaints indicated issues with the electrical components that affected the engine, the transmission, another measure component in the 2018 Ford Escape vehicles.

In some scenarios, the faulty electrical system might cause some burning rubber smell around the cabin.

While Ford did not release any recall regarding any electrical problems in the 2018 Ford Escape, they discussed a couple of potential solutions for any electrical malfunctions in their Bolton services.

For instance, Ford discussed that there might be a problem in the sync three systems, which could affect the display's overall performance, voice recognition, navigation system, phone pairing, and others.

It all depends on where the problem is coming from. You need to keep an eye and ear for any burning smells because this might indicate an issue with the wiring system.

Any signal of your vehicles' abnormal behaviors should be treated seriously. You need to immediately take the vehicle to a professional mechanic to resolve the problem early and prevent dealing with complications.

“I was driving to work this morning, and a strong smell of burning plastic/rubber filled the cabin. I did make it to work and had several coworkers sit in the vehicle to make sure I did not imagine the odor. Also lifted the hood to check the engine for any melting hoses etc. And did not see anything. I took the vehicle in that morning; the service manager and technician did a check and did not notice a smell and told me that the smell was the leather seat covers that I installed.”

Few customers reported issues with the 2018 Ford Escape steering system. They indicated that their relatively newer vehicles of 1000 miles experienced some pulling to one side rather than the other.

No information we reported regarding solutions or repair costs about this problem. It sounds like the problem was resolved under the extended warranty.

Although Ford did not discuss the steering polling issue, they indicated some concerns about steering or real vibrations in their service bulletin number SM4763 eight. Ford's only reported solution is to educate the customers about how the departure warning system works, so they don't deal with significant vibration in their steering system.

“I was beginning to accelerate after stopping at a stop sign when the steering froze then violently turned to the right. When the steering turned to the right, I inadvertently pressed on the accelerator pedal speeding up slightly to approximately 15 mph. During the split second that this happened I was able to wrestle the vehicle back towards the road barely missing a telephone pole, but I did strike the guide wires that support the pole. This caused about $800 in damage to the vehicle, and no defect could be found by the service station. When the steering did go out, it was the most difficult thing to steer that I have ever driven, including the old large truck with no power steering.”

Are there any recalls on the 2018 Ford Escape?

Yes, the 2018 Ford Escape perceived two recalls, focusing on the brake’s hoses and the other focuses on airbag components.

Despite the high number of reported complaints about the 2018 Ford Escape engine, transmission, and steering system, none of these problems resulted in every call.

On February 2nd, 2018, Ford decided to recall about 11,113 2018 Ford Escape vehicles. The recall was because of an issue with the side curtain in the airbags. Fort indicated that the side curtain might detach whenever the airbag is diploid. As a result, it can affect the cabin of the vehicle, and therefore, all affected vehicles were asked to visit the nearest Ford dealership to get the problem resolved free of charge.

On March 14th, 2018, Ford also recalled 88 vehicles regarding an issue with the brake hoses. Ford indicated that the vehicle's installed brake hoses were not appropriate. It might cause some fluid leaks. All affected vehicles were also invited to visit the nearest Ford dealership to get the problem resolved free of charge.

How to avoid purchasing a 2018 Ford Escape with mechanical problems?

Since you're planning to invest thousands of dollars in purchasing it used 2018 Ford Escape, you need to step back and ensure that you're doing your due diligence to prevent dealing with mechanical problems.

After reading this article, you are aware of all potential problems in the 2018 Ford Escape.

Therefore, good job now to perform either but drive or have a professional mechanic inspect for these vehicles’ problems.

When you perform the test drive, you need to keep an ear and eye ready for any abnormal behaviors of your vehicle’s overall performance.

It is also worth testing the smaller and minor components, including the radio, the air conditioning, any other components were planning to use on your daily basis. Although these components are minor, they will cost you a good amount of money down the road if you don't take good care of detecting them now.

Many customers are now moving towards smaller SUVs like the 2018 Ford Escape. This vehicle came with amazing features to attract thousands of customers till now.

However, immediately after these customers drive the 2018 Ford Escape, they realized dealing with complicated problems can lead to unintended accelerations in severe scenarios.

If you have a used 2018 Ford Escape, you might be dealing with severe situations related to the engine or the transmission. If that's the case, evaluate your situation and see whether it's worth fixing this car or selling it.

One might wonder who will accept a 2018 Ford Escape with major mechanical problems? Well, you are in the right location!

Cash Cars Buyer guarantees to buy your 2018 Ford Escape vehicle and pay you the top dollar for this vehicle. Furthermore, we will tow this car free of charge despite your living location around the United States.

If you would like more information about our process, you could always give our amazing customer service a call at 866-924-4608 or visit our home page click on the free instant online offer.