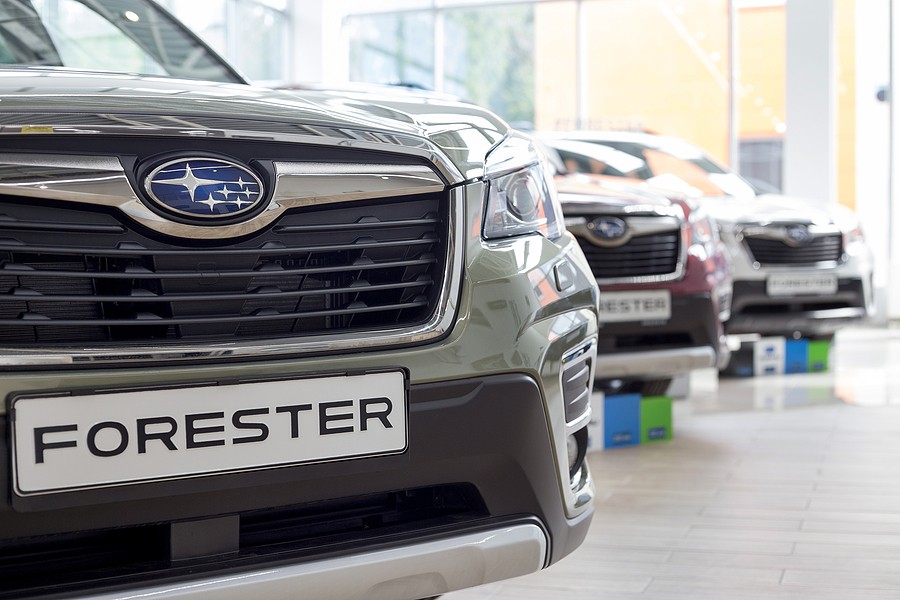 The 2017 Subaru Forester is an amazing compact SUV providing a wide interior, roomy seat, and a long list of safety features.

While the 2017 Subaru Forester was described as “the quality that lasts,” after driving this vehicle for a couple of years, owners indicated significant mechanical issues related to the airbags, powertrain, and the engine.

Whether you're a current owner of the 2017 Subaru Forester or a future shopper, you need to familiarize yourself with all potential mechanical problems you might face with your vehicle.

This article summarizes all reported complaints from real customers about the 2017 Subaru Forester problems. We highlight each problem along with expected mileage at when and where the problem is expected to occur. We also list all potential solutions along with repair costs whenever the information is available.

The 2017 Subaru Forester is a great compact SUV that provides you with large cargo capacity, roomy seats, tons of safety features, and more.

The 2017 Subaru Forester was ranked number 10 in the top 2017 affordable compact SUVs and received a score of 7.8 out of 10 according to cars.usnews.com.

The vehicle comes with either a 2.0-liter four-cylinder or 2.5-liter 4-cylinder engine. This engine is associated with either A6 speed manual transmission or continuously variable transmission. The towing capacity of the 2017 Subaru Forester is about 1500 pounds. The oil capacity is 5.1 quarts, while the cargo volume is about 31.5 ft3.

Although Subaru described this model year as “the quality that lasts,” after driving this vehicle for a couple of years, owners had a different opinion. Several mechanical problems occurred at the first-rate 2017 Subaru Forester owners. These owners indicated that they had to deal with faulty powertrain, poor engine construction, and effective airbags.

The 2017 super forced her received a significantly larger number of mechanical issues than the 2016 model year.

Most of these complaints were associated with either the transmission, The electrical system, the engine, the AC and heating system, and airbags.

Despite many reported complaints, Subaru did not release any recalls associated with most of these problems. The only recall has to do with its defective airbag only.

Let's take a closer look at each reported problem to get a better sense of when these problems are expected to occur and whether there is any information regarding repair costs and repair options:

Since the airbags are one of your vehicle's most important safety features, we decided to start our review of the 2017 Subaru Forester, focusing on the airbag issue.

Many people skip evaluating or inspecting the airbags in any used vehicle as we expect that these bags will work all the time. However, this was not the case with the 2017 Subaru Forester.

Many reported complaints to the NHTSA indicated that the airbags do not deploy at the right time, which causes risks of injuries when involved in car accidents.

Luckily, Subaru did not remain quiet and decided to release every call. You will find this recall by searching in the NHTSA for several 19 V 701000. Subaru admitted that the passenger side here bad connections might have some loose wiring, resulting in the airbag not deploying during accidents. Unfortunately, affected vehicles did not receive repairs immediately because the part was not available.

Regarding the airbag issue, a customer posted a complaint to the NHTSA indicating that “Involved in a car accident that was where the Subaru was T-boned on the passenger side, resulting in extensive damage. Both the front and rear door and all paneling on the passenger side had to be replaced. The side airbags failed to deploy upon impact. My vehicle was moving at 40 mph, and the vehicle that hit me was going 20-30 mph and accelerating.”

After the comment reported complaints about the airbags, a good number of customers indicated having significant issues with their transmission.

The most-reported complaint was focused on shuttering and dealing with the underpowered vehicle.

When taking a closer look at other transmission issues with Subaru fosters, it seems like there are multiple complaints regarding this manufacturer's CVT transmission. It turns out that many of the transmissions did not have the required amount of fluid for the transmission to work properly. Unfortunately, Subaru did not release any recalls to take care of this problem.

A customer reported a complaint to edmunds.com indicating dealing with sluggish transmission issues. He stated: “Incredibly sluggish for a CVT. The gearing designed to simulate actual shifting is terrible. It is so awful that the vehicle will jerk you around at low speeds rather than driving smoothly because it can’t decide if you are driving in its fake 2nd or fake 3rd gears. Additionally, it appears that the transmission either slips or cannot decide whether it is time to engage when you hit the gas suddenly from a standstill. This is particularly dangerous if you need to accelerate to avoid a collision.”

The third most reported complaint about the 2017 Subaru Forester has to do with significant engine problems. Many people were very frustrated about engine stolen, excessive oil consumption, vehicle revving on start, low island, and unintended acceleration.

Surprisingly, most of these engine-related problems occur at relatively newer 2017 Subaru Forster. Reported vehicles were at only about 4000 miles, and some were at about 20,000 miles.

The complaint did not include any information regarding repaired options or repair costs which either means that the problem was not resolved or the vehicles were sold, especially those needing to install a new engine.

Subaru also released a service bulletin focusing on the 2017 Subaru Forester engine problems. The Bolton indicated that the engine lights caused some knocking noises, especially during high air temperatures. Surging at accelerations is also expected, and owners are expected to deal with check engine light illuminating. The immediate solution to this problem would be updating the ECM module.

One customer reported to NHTSA his frustration about the significant mechanical issues in the 2017 Subaru Forester engine problems. He stated that: “This all began at 22,352 miles, and to-date the market value of repairs has accumulated to $16,100.00. This same engine issue has happened two years in a row, yet a Subaru representative mentioned to us that it is cheaper for Subaru to fix vehicle by vehicle that comes in instead of issuing a nation-wide recall on our model. We were told our Forester XT has the same engine that is in an Impreza, which is not safe and is not right to the consumer.”

A good number of complaints indicated that the engine might lose power and the power steering light comes on suddenly. Also, the steering wheel might get locked without any previous warning signs.

Again, steering problems occurred as newer 2017 Subaru Forester vehicles, and some of them were at only 7,000 miles.

It seems like Subaru is also aware of these steering problems, as they indicated in their service bulletin number 04 23 18R. In this service bulletin, they mentioned that weird noises are expected to come from the electronic power steering gearbox, and some customers might experience excessive vibration.

This customer reported a complaint to edmunds.com explaining the issue with the steering system: “This is our 4th Subaru. Previously owned Impreza 2007, Forester 2011, and Outback 2013. I got to say, I’m extremely disappointed with 2017 Forester. Aesthetically it is very appealing and during the test drive everything appears to be great. Well after driving for 5 thousand miles and couple of smaller road trips, we realized that ride quality is very poor,  it feels like the car wobbles side to side like a carriage and because of the wobble it you constantly have to correct the wheel for it to go straight, especially at higher speeds.”

The 2017 Subaru Forester was also plagued by several electrical system problems. Owners of vehicles around 25,000 miles had to deal with a very weak battery, and they needed to install a new battery for about $200.

Another group of customers indicated issues with the radio and the navigation system. The radio would freeze without any previous warning signs. Other customers complained about the engine not turning over due to issues with the electrical system.

Although Subaru focused on upgrading the new power windows, they did not address some issues with the windows operations from the driver side.

This customer reported another complaint to edmunds.com about his Subaru Forester, saying that “Every time you will disconnect your battery you will need to have your windows reprogrammed for them to function. It can be done at your Subaru dealership. I did contact Subaru of America representative to confirm everything – yes, windows need to be reprogrammed. And on top of enormous inconvenience it brings – YOU WILL HAVE TO PAY FOR IT!”

Although the 2017 Subaru Forester came with a long list of new features, the vehicle loses its value if these features do not work properly.

What happens with the speed control Module can be a little risky to many owners. There are situations where the vehicle might reverse back in acceleration, causing some risk concerns.

Another customer reported a complaint to NHTSA, saying that the vehicle had issues with reverse acceleration and airbags not deploying at the right time. He said: “The consumer stated while attempting to park the vehicle, it accelerated in reverse. The vehicle drove over a curb and crashed into a tree. The brakes were inoperable. The key was removed from the ignition to bring the vehicle to a stop. The airbag did not deploy.”

Several complaints indicated that the 2017 Subaru Forester might have broken the windshield suddenly. Old customers needed to replace the windshield for about $300.00, and the problem mostly occurred at around 13,000 miles.

Again, Subaru focused on upgrading existing features in the windows while ignoring some of these problems. For example, in their bulletin number 1227219 R, the company installed a new redesign for the front door classes to prevent water leaks.

Hopefully, after hearing all these complaints about the 2017 Subaru Forester, Subaru will include any potential upgrades in future vehicles to address this problem.

Another customer posted a complaint to NHTSA saying, “Damaged windshield from a tiny pebble resulting in a 2-inch spider webbed. Crack. Driving on highway on a paved road without any construction. Very small pebble struck windshield and left a large crack.”

Are there any recalls on the 2017 Subaru Forester?

While the 2017 Subaru Forester received tons of complaints regarding major components in the vehicle, Subaru did not release any recalls associated with these problems.

There wasn't any safety-related recall for the 2017 Subaru Forester. However, there was only one recall related to the interior of this vehicle.

On February 11th, 2020, Subaru decided to recall about 366,282 vehicles from 2015, 2016, 2017, and 2018 Subaru Foresters. Their call was focused on issues with the defective airbags. Sarah indicated that the front passenger's airbag might not be activated all the time due to an issue with the system wiring. The system wiring was loose on the passenger side. Thus, all affected vehicles were invited to visit the nearest Subaru dealership to replace the occupant’s inspection system or ODS sensor.

Despite the amazing features that came with the 2017 Subaru Forester, owners discovered significant problems immediately after driving this vehicle for a couple of years.

Most of these problems have to do with either the transmission, the airbags, the engine, the electrical system, etc.

Unfortunately, so rude did not release any recalls that have to do with these major problems. The only wrinkle was focused on airbag issues.

If you have a used 2017 Subaru Forester, before spending thousands of dollars getting problems resolved, it might be worth investigating whether it's worth fixing this car or not.

If you came into a situation where repair costs are very expensive, it might be the right time now to sell your 2017 Subaru Forester to Cash Cars Buyer.

Cash cars buyer grantees to buy your vehicle despite its condition, and we will provide you with the top dollars and free towing despite your address around the United States.

To get more information about our company and our process, you can always reach out to us at 866-924-4608 or visit our home page click on the free instant online offer.